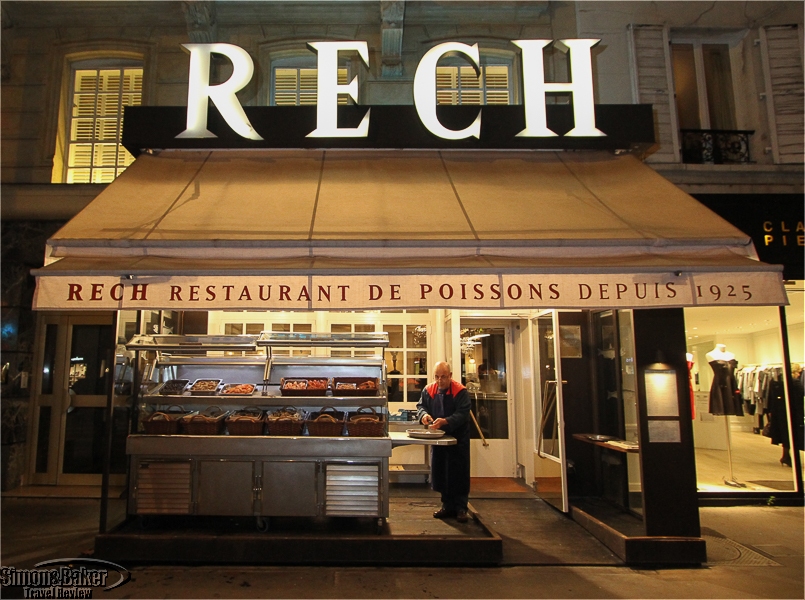 The first time were went to Rech, part of the multinational Alain Ducasse culinary portfolio, we had a most pleasant lunch. On our return visit we had an equally delightful dinner. The modern understated yet warm décor with blond woods and a convivial ambiance were a good match for the well prepared tasty meal, aesthetically pleasing presentation, and friendly and efficient bilingual service.

Although we were the first to arrive the two room upstairs dining section filled up as the evening wore on. Yet we never lacked for anything at our table. Attentive eyes glanced by en route to the second room, and at the most discrete indication from us someone would immediately attend to our request. The table side dish preparation, including fish deboning, enhanced the experience. 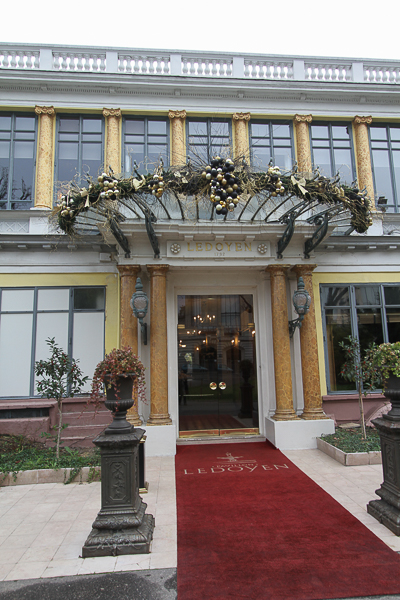 While we had dined well at the same venue a number of times in the past that was our first meal since Chef Yannick Alleno had taken the reigns of the newly named Alleno Paris. Our multi course tasting menu was a most pleasant surprise.

Lunch was a blend of classical French cuisine yet modern at the same time. From the Krug by the glass to the final bite of sweets at the end the meal was a success. Delicious, refined and beautifully presented dishes paired with attentive, warm and detail oriented service matched the elegant setting in a historic building steps away from the famous Champs Elysees.

The chef’s enthusiastic back to basics sauce centered culinary style was simultaneously rewarding and refreshing. Each dish was a journey of discovery far enough from the norm to be intriguing yet still close enough to our zone of comfort to be pleasurable and fun. We congratulate him and his team on their success, and look forward to following them in the new restaurant at the Ledoyen Pavillon. 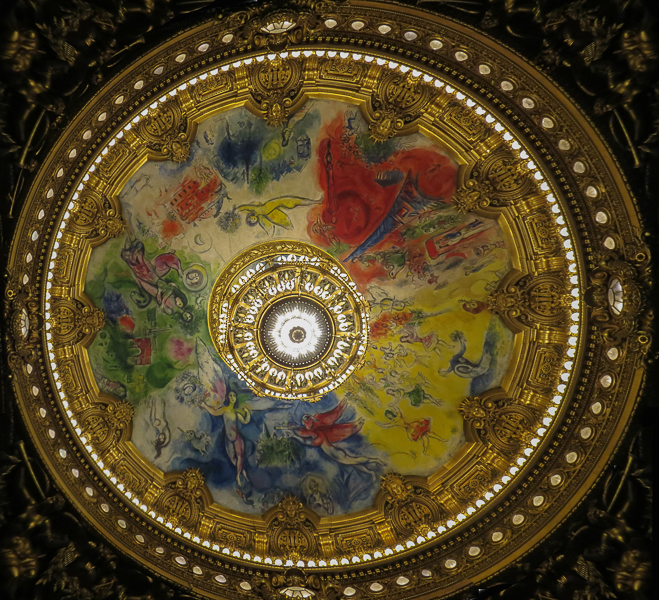 We liked the pretty music including several memorable arias. The staging was thought provoking. The performance developed at times simultaneously, at least in part, in more than one of the six sections in which the stage was divided for the show. The set up, while novel, was distracting and at times required so much concentration that it detracted from the experience. It was not to our liking. Having children actors in one part of the stage and adult actors playing the same children in another at the same time also made it confusing to know what was going on, and to understand the allegorical meaning of the vignettes in the two stages. Also notable were the bright costumes, especially the eye popping fuchsia sequined evening dress of the witch.

During the intermission, we strolled around the most beautiful areas, admiring the interior and observing the crowd. Many held champagne flutes or light snacks from the various vendors peppered throughout the lobby. The evening view of the long Avenue de l’Opera outside was a treat. When the chimes called for the restart of the performance more than a few seemed almost reticent to abandon their building browsing. 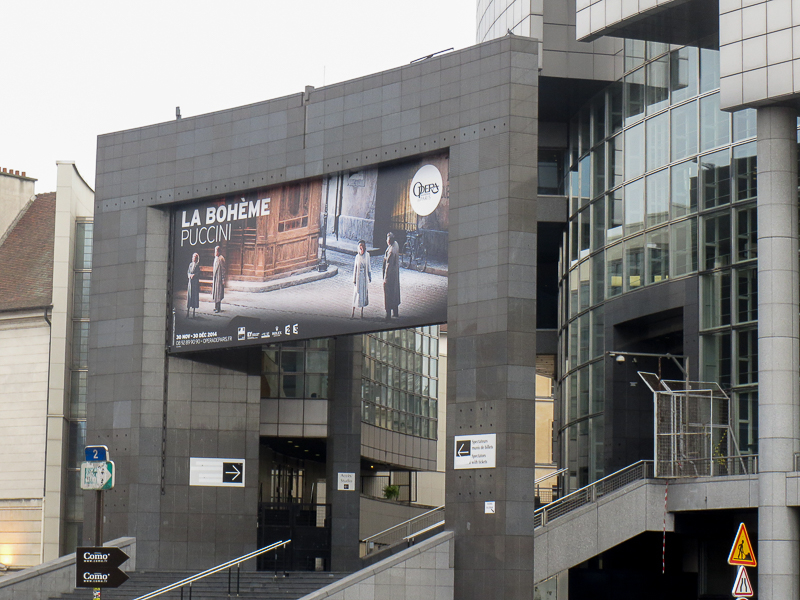 We liked the relatively comfortable Category 1 seats near the front of the theater with an unobstructed view of the stage. The modern theater offered ample selection of seats. 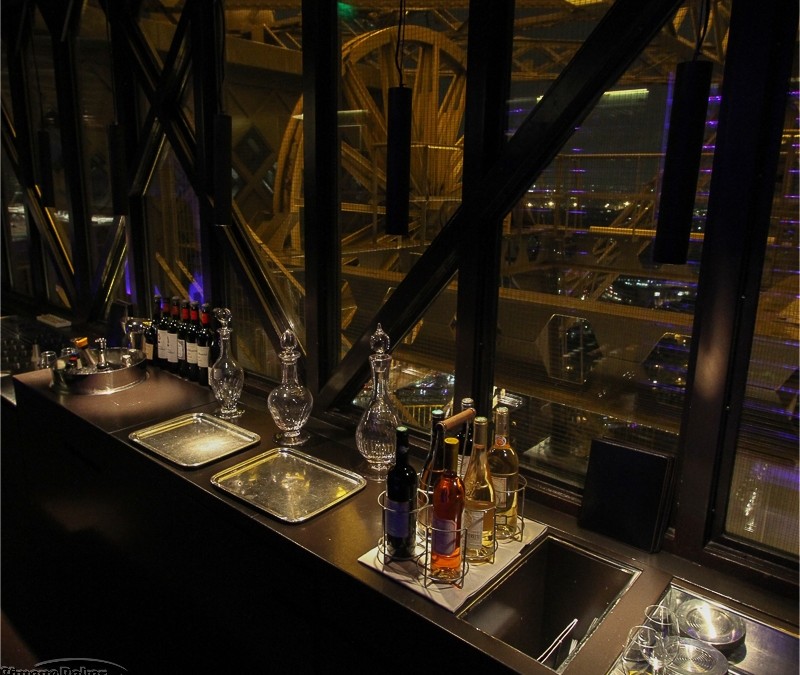 Our dinner at Le Jules Verne restaurant was magical. From the moment we rode the private heated elevator with an escort from the ground floor of the South Pillar, up 125 meters to the restaurant reception half way up the famous Eiffel Tower in Paris, we felt special. Although our expectations were high, based on previous visits to the restaurant at France’s most iconic monument, we were delighted with the evening.
We were pleased to have been assigned one of the few coveted window side tables. Below us, thousands of lights twinkled, bringing to mind the words City of Lights as Paris is also known. 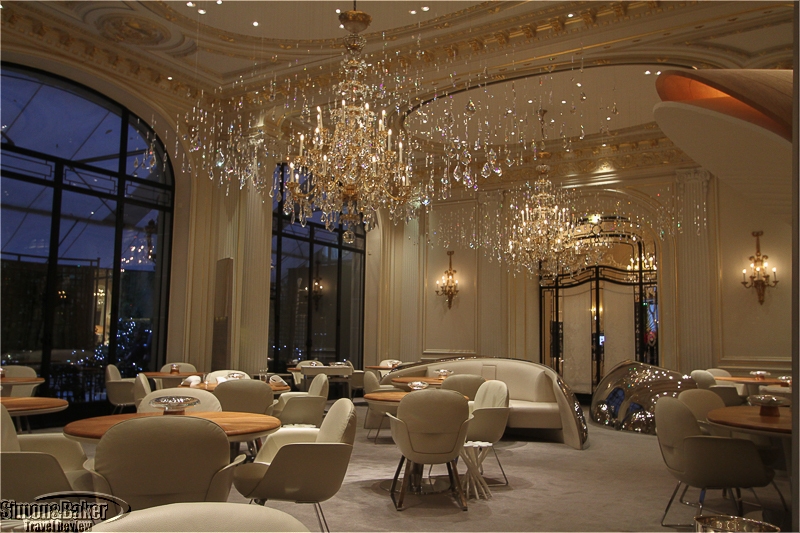 As soon as we entered we focused our attention on the restaurant’s partial decorative transformation since our last visit. Armed with a glass each of well chilled rose champagne we set out to discover the reincarnation of Alain Ducasse au Plaza Athenee. A server brought us complimentary carrot, celery and apple juice with an ice cube, setting the tone for the rest of the healthful meal. Hors d’œuvre bites followed on the heels of a staff person who explained the menu’s cereal, vegetable (produce were brought from the garden of the Chateau de Versailles through an exclusive partnership) and seafood options. While it was possible to order some meat products they were not listed on the regular menu because they were discouraged.