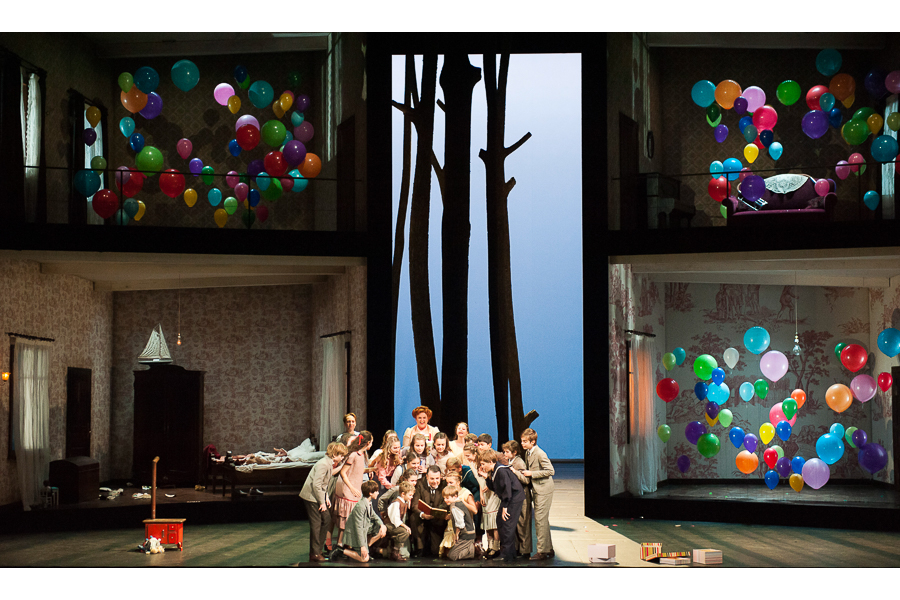 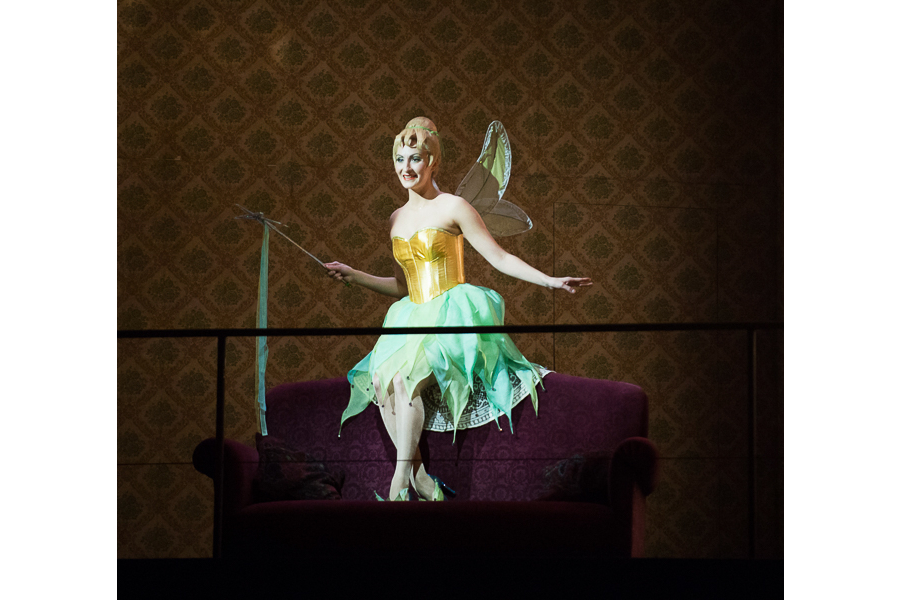 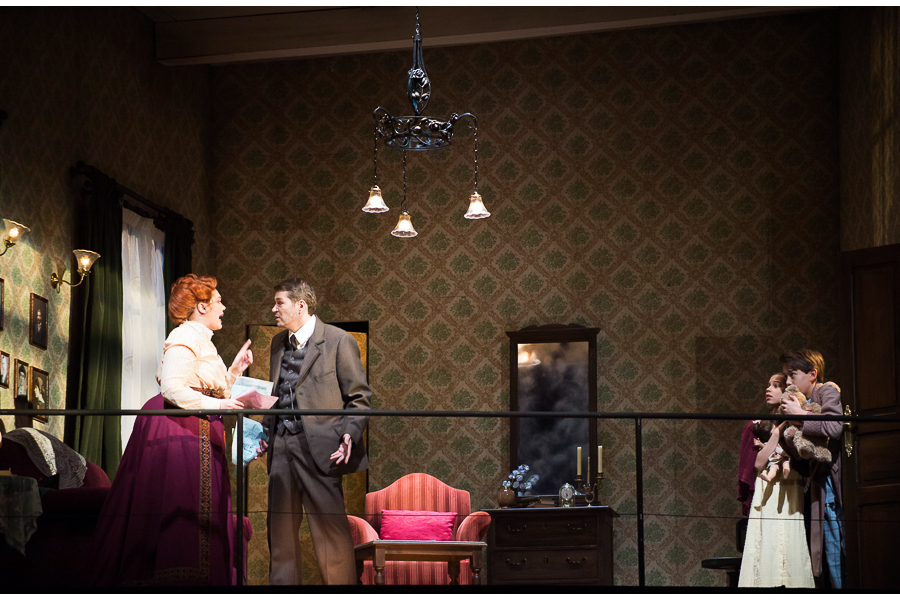 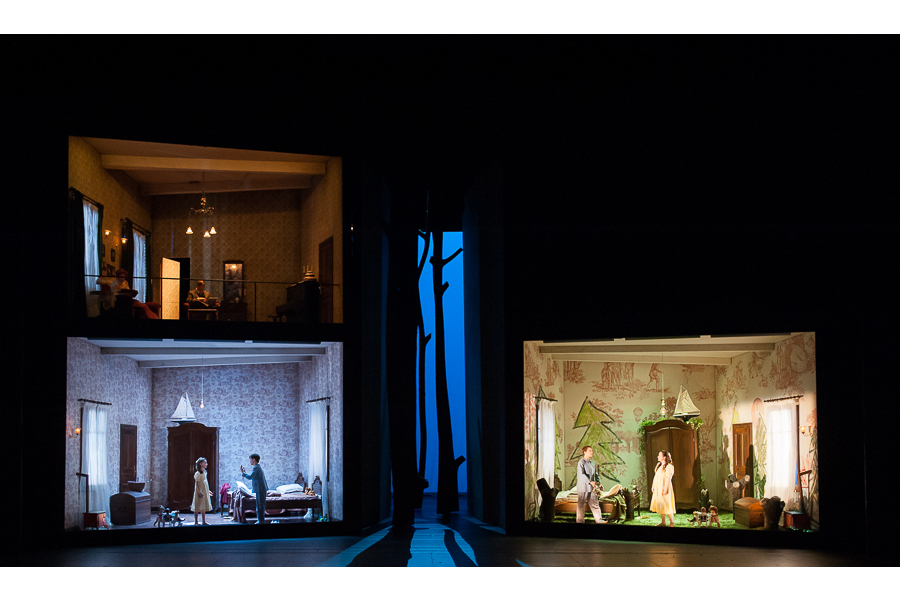 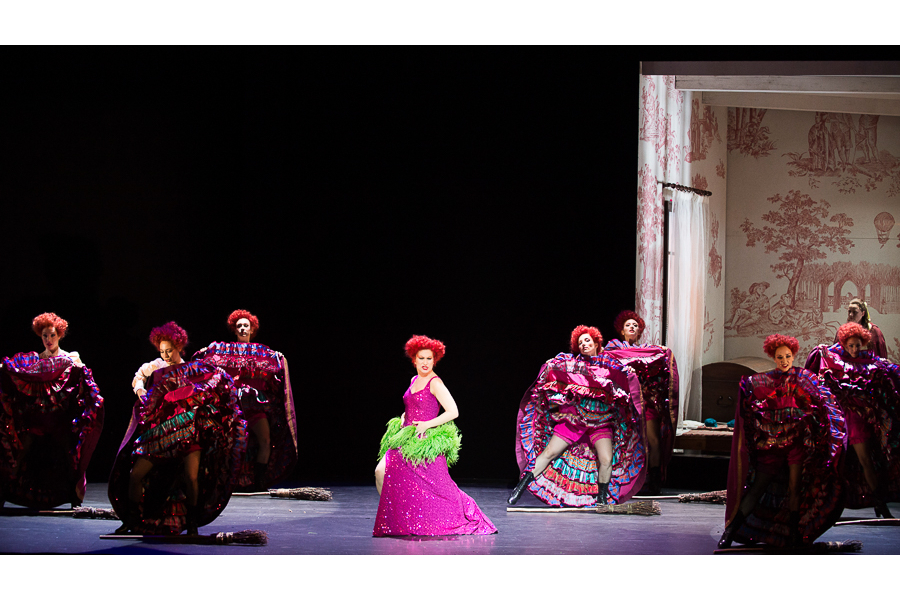 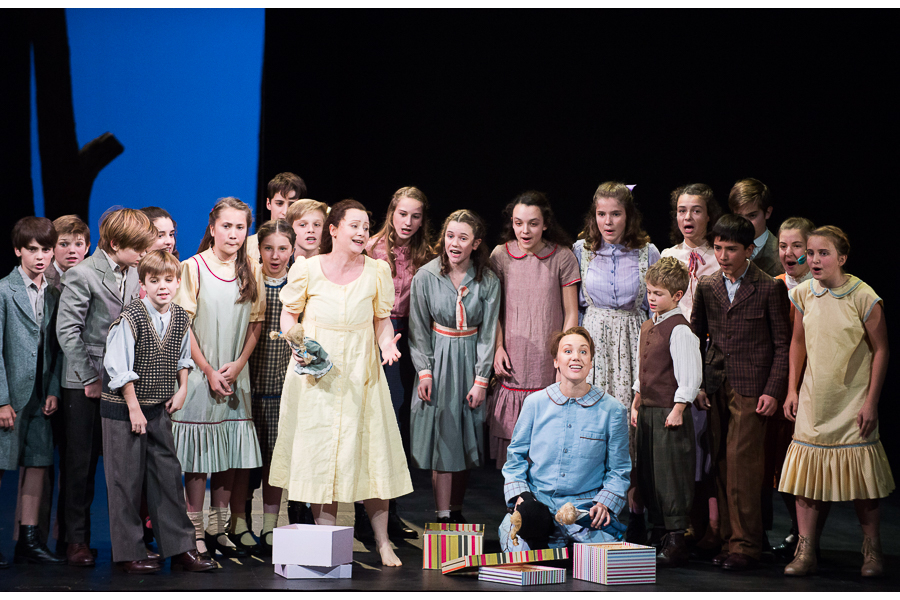 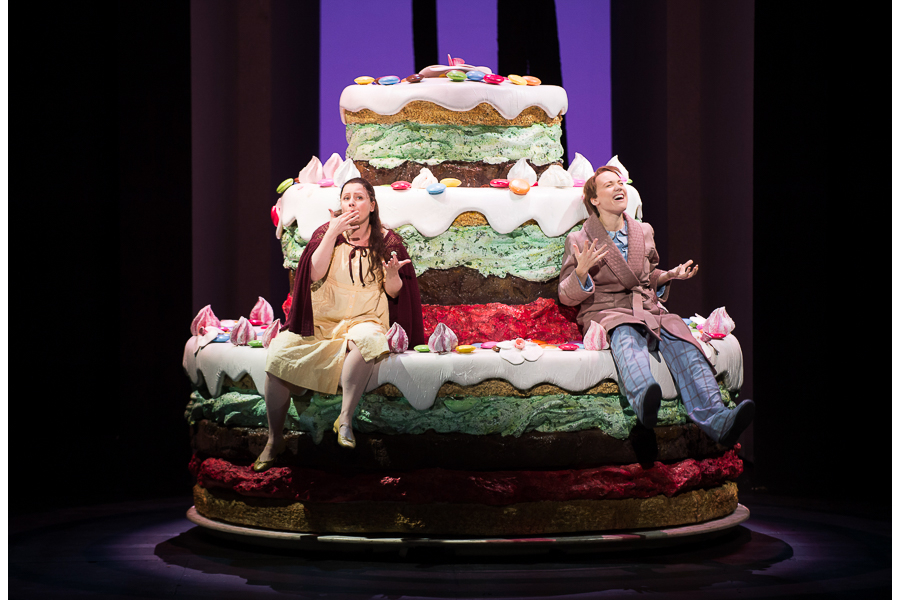 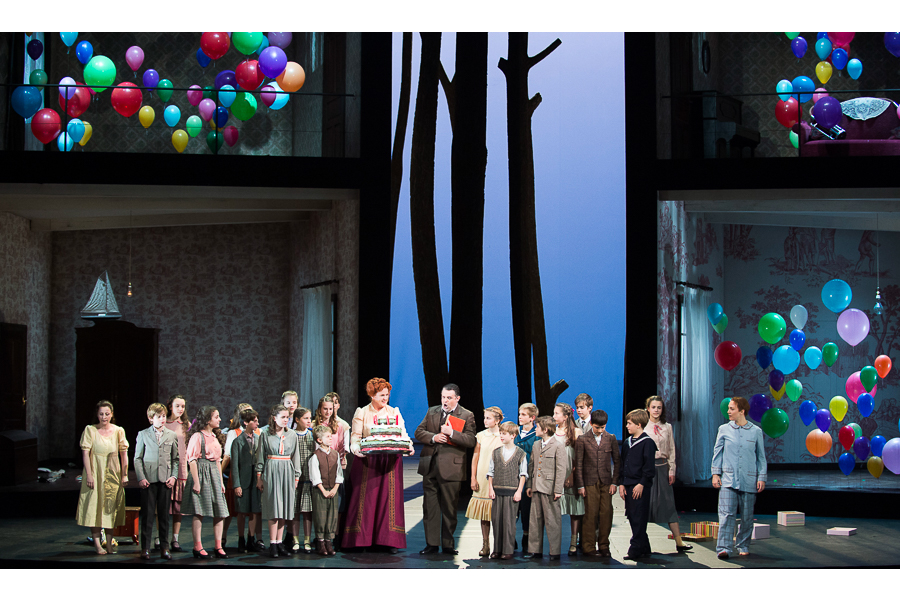 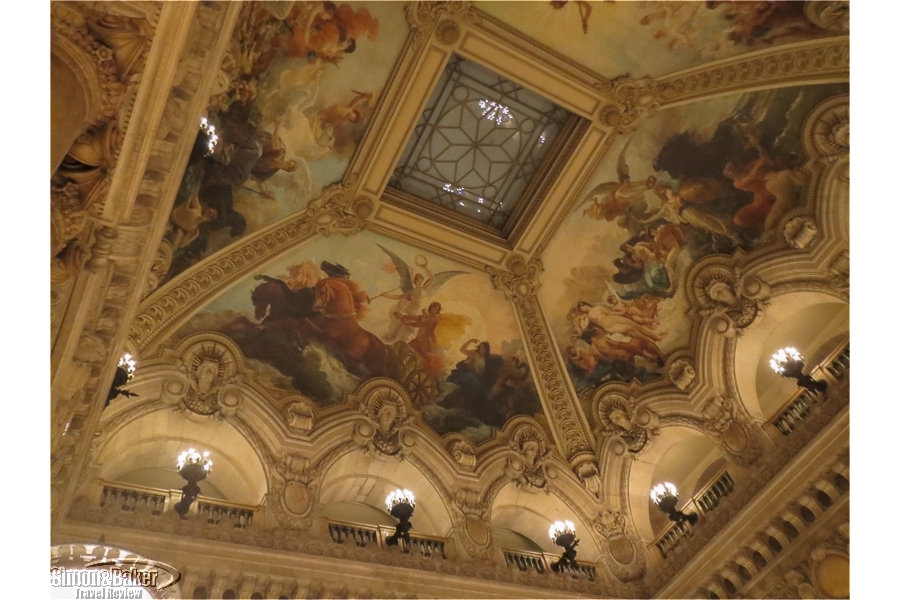 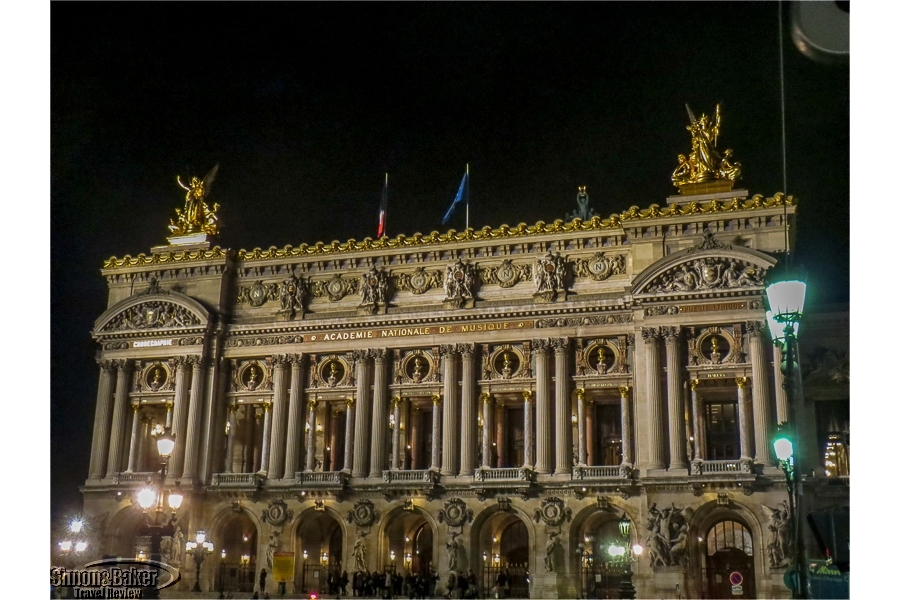 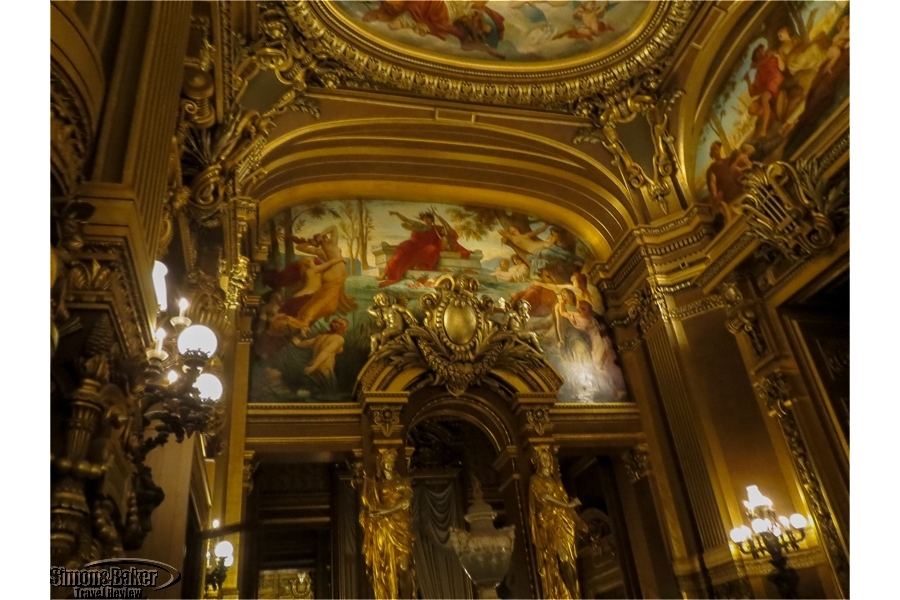 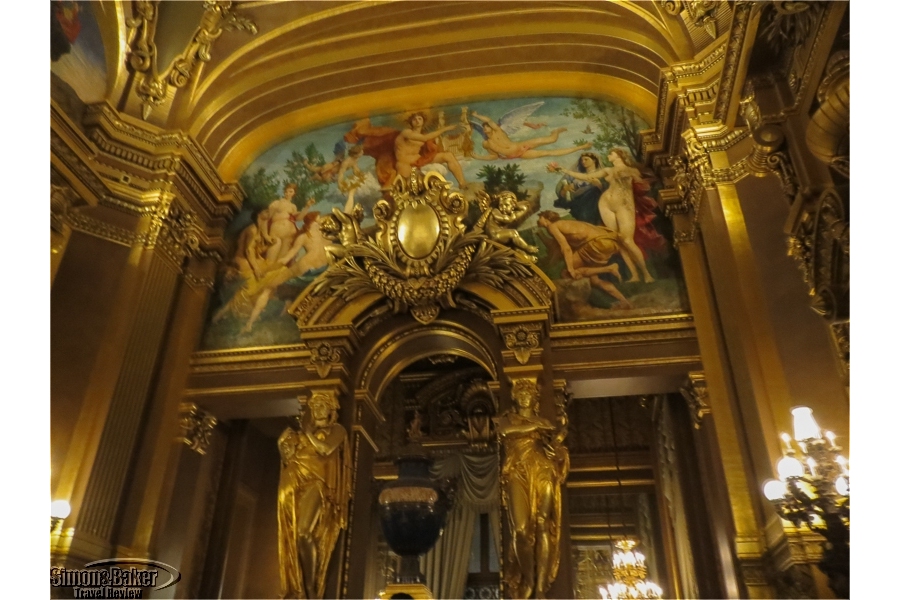 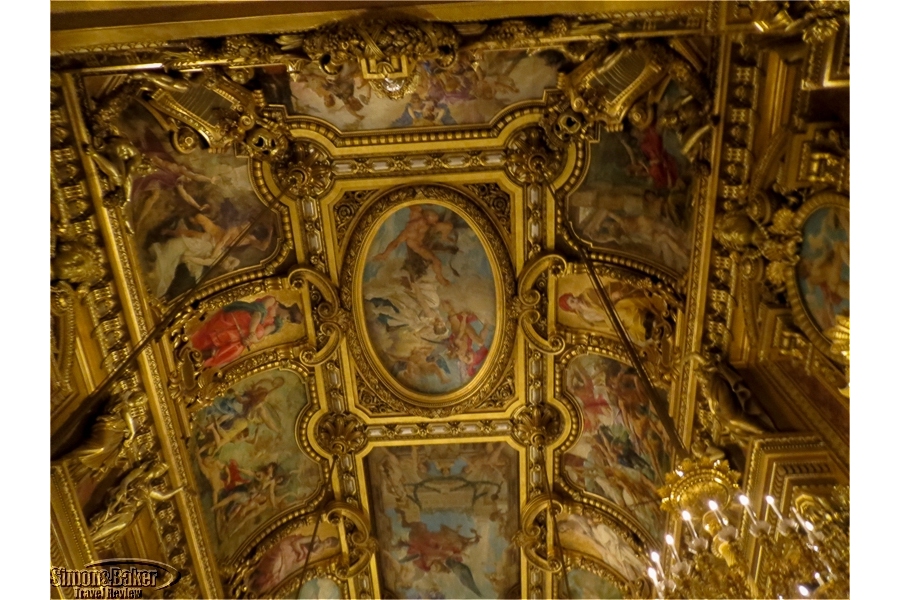 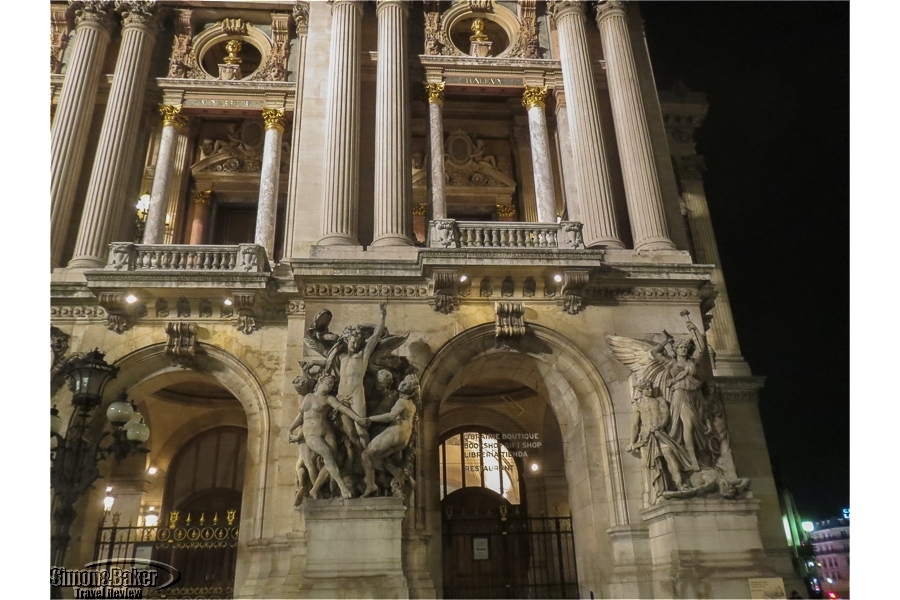 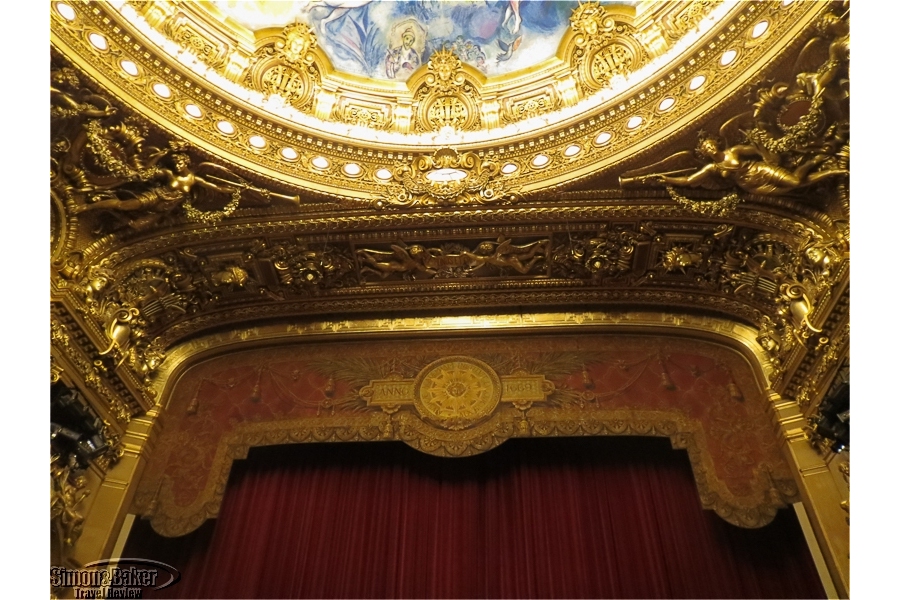 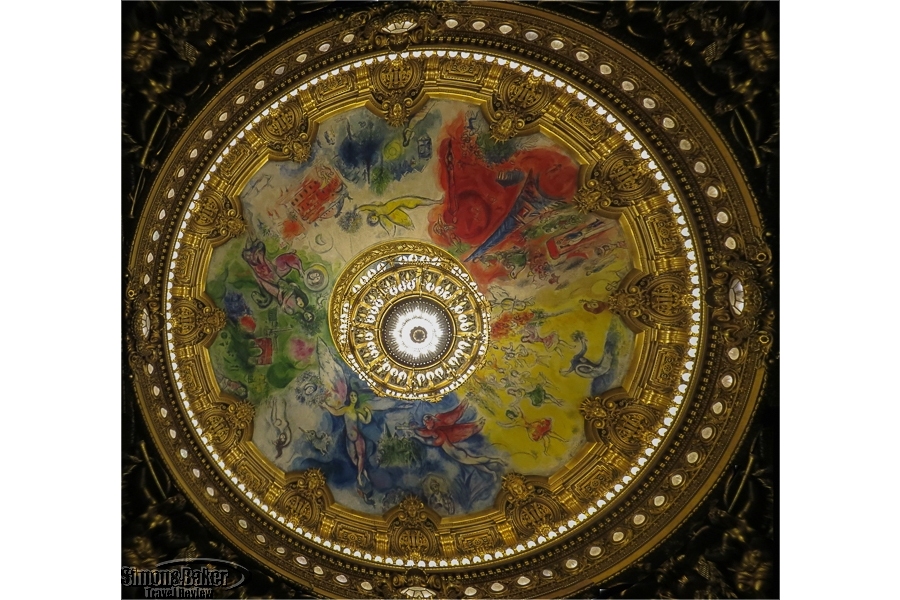 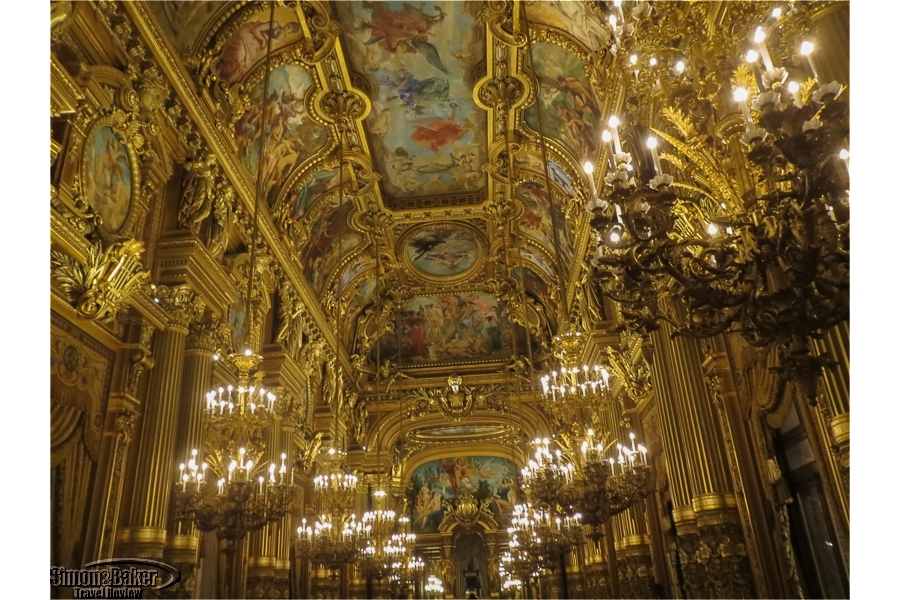 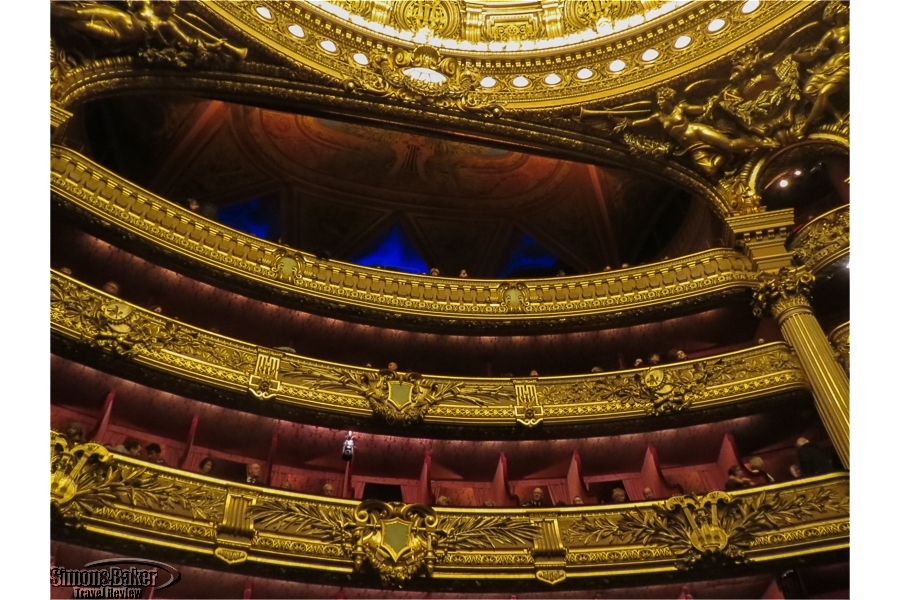 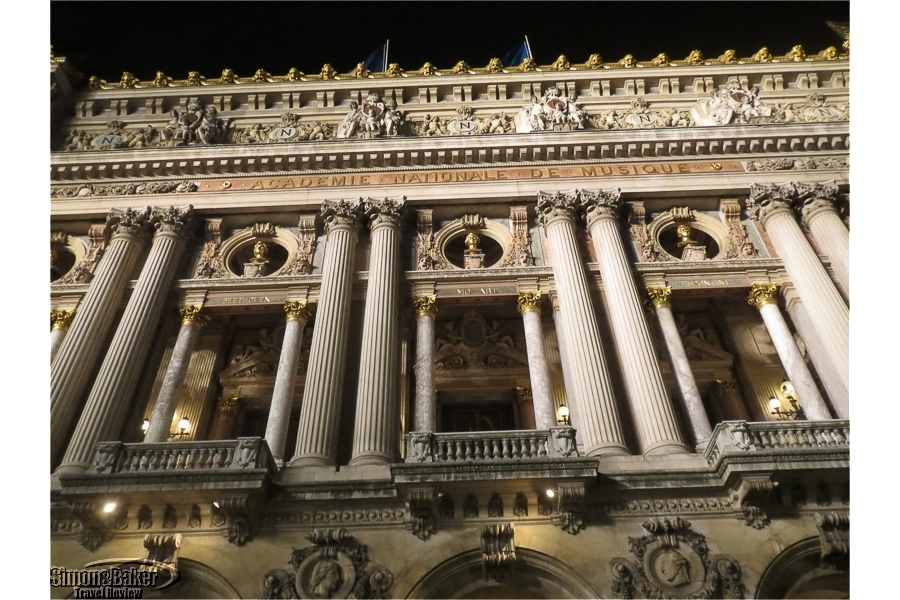 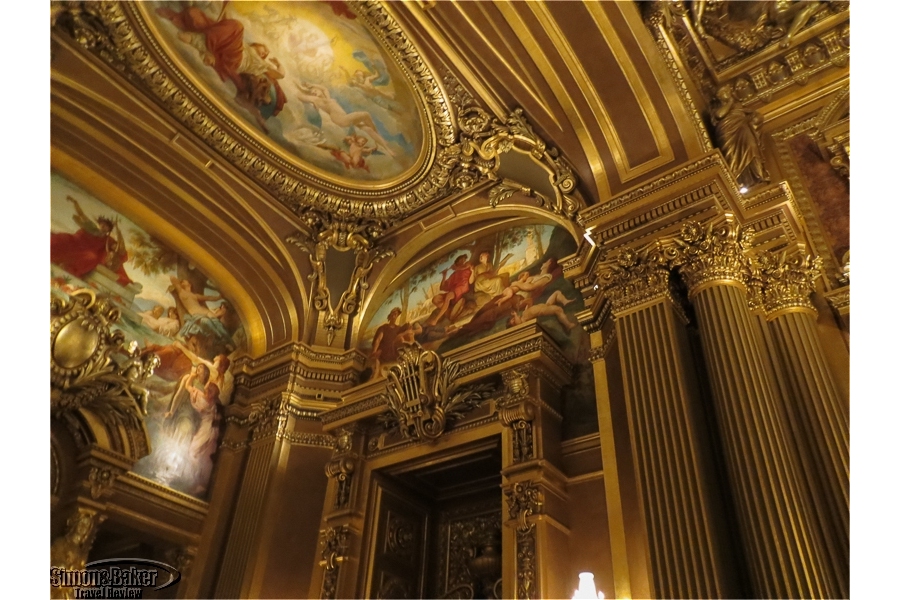 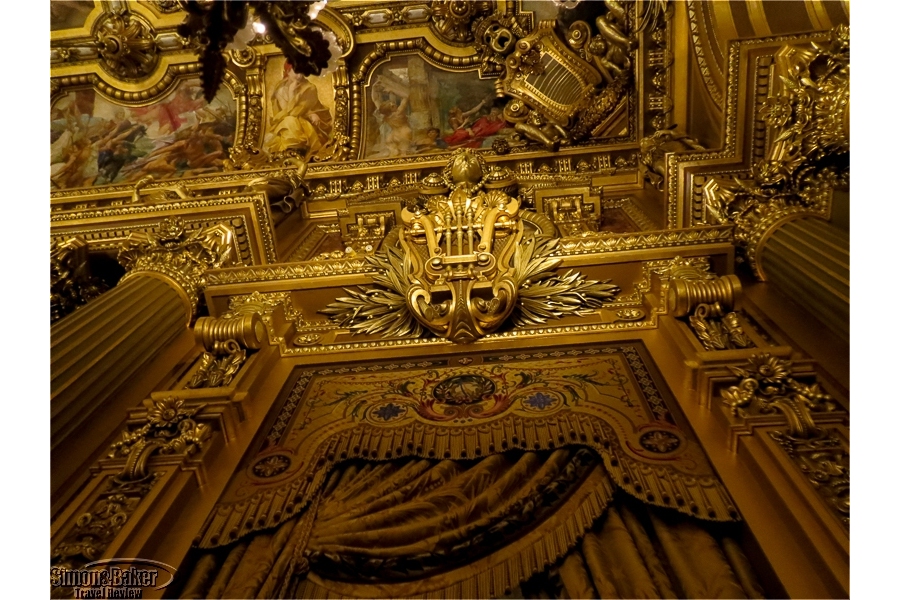 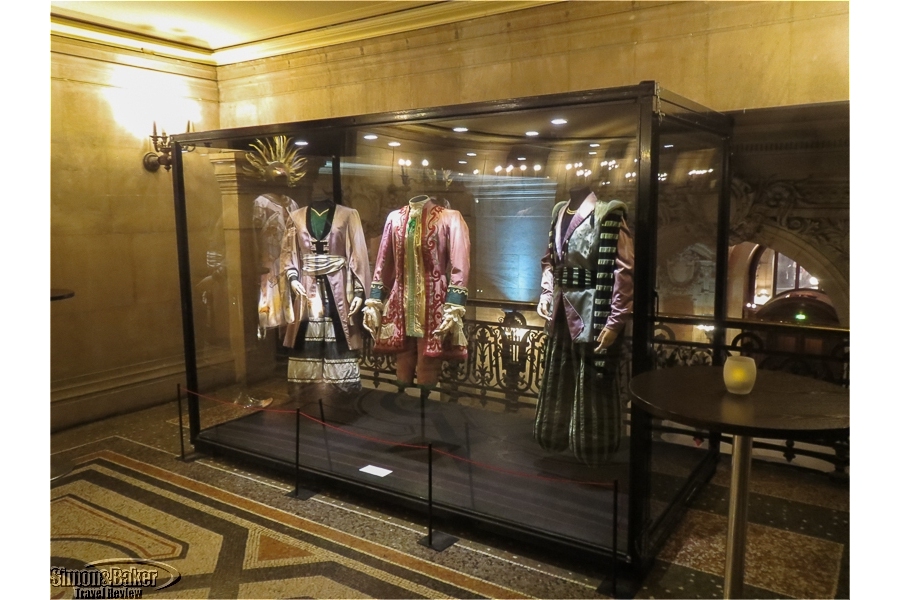 We were there for the evening opening of Hansel and Gretel. The Orchestra of the Paris National Opera performed the Engelbert Humperkinck opera adapted from the Grimm brothers tale by the same name. From our ground level Orchestra seats (368 and 370), we had a clear view of the entire stage.

We liked the pretty music including several memorable arias. The staging was thought provoking. The performance developed at times simultaneously, at least in part, in more than one of the six sections in which the stage was divided for the show. The set up, while novel, was distracting and at times required so much concentration that it detracted from the experience. It was not to our liking. Having children actors in one part of the stage and adult actors playing the same children in another at the same time also made it confusing to know what was going on, and to understand the allegorical meaning of the vignettes in the two stages. Also notable were the bright costumes, especially the eye popping fuchsia sequined evening dress of the witch.

During the intermission, we strolled around the most beautiful areas, admiring the interior and observing the crowd. Many held champagne flutes or light snacks from the various vendors peppered throughout the lobby. The evening view of the long Avenue de l’Opera outside was a treat. When the chimes called for the restart of the performance more than a few seemed almost reticent to abandon their building browsing.

Established-Renovated The Palais Garnier, designed by Charles Garnier, was established as a performance venue in 1875, when it was inaugurated. The facade was renovated in 2000. The most recent renovation of Le Grand foyer took place in 2004. There were plans for additional renovations.

Location In the city’s ninth arrondissement

Size The building’s interior space was 57,946 square meters. There was seating capacity for 2,054. The Palais Garnier welcomed 480,000 visitors per year.

Transportation The theater is in the heart of the city within easy reach by public and private transport.

Description The Hansel and Gretel performance started promptly at 8 pm. Based on the music of Engelbert Humperdinck, it was divided into a one hour first part, a thirty minute intermission, and a forty five minute final part. Peter was played by Jochen Schmeckenbecher, Gertrud by Irmgard Vilksmaier, Hansel by Andrea Hill, Gretel by Bernarda Bobro, Die Knusperbexe by Doris Lamprecht, Sandmannchen by Elodie Hache, and Taumannchen by Olga Seliverstova. The music was by the Orchestra of the Paris National Opera and the Childrens’ Chorus of the Paris National Opera.

Despite of what looked like a sold out show and long lines in certain parts of the building it was a pleasure to stroll around the Grand Staircase and sumptuous foyers. The Grand Foyer was designed by Garnier, an architect, to resemble a chateau with oversize windows, mirrors, sparkling mosaics and a gold background. The Palais Garnier was the thirteenth building to house the Paris Opera. The ceiling with music history scenes was painted by Paul Baudry. I especially liked the view of avenue de l’Opera from the Grand Foyer near a copy of a bust of Garnier.

Restaurant Near the seating area there were bar vendors selling beverages including wine and champagne and snacks during the intermission. On one side of the Palais Garnier the building rented space to a vendor who ran a restaurant. There was no visible access to the restaurant from the interior of the building.
Souvenir Shop The souvenir shop at the Palais Garnier was run by a vendor.
Other The French translation of the German opera appeared at the top of the stage, requiring me to divide my attention between the parts of the stage where the performers were and the part where the translation appeared above them. Craning my neck that way through the evening caused it to tire. By the end of the performance I had a mild neck ache.

The orchestra sounds were loud and clear although at times it seemed to cover in part the voices of the singers. While the voice of the mother ran clear and true I had difficulty hearing Hansel over the orchestra.

There was a jump seat at the end of each row in the Orchestra level. This meant the rows grew by one seat on each end, leaving almost no space in what became a single continuous row from one side of the room to the other. It took away from the experience and made us wonder about the safety of such a seating arrangement in case the room had to be evacuated in an emergency.

The restroom and coatroom lines were long. The temperature within our Orchestra section was warm without a sweater (with a scarf) and somewhat cooler in the common areas.

Month And Date Of Visit November 2014