This tiny nation, with its remarkably diverse topography and natural treasures, was a pleasure to visit. With a landmass of just under 20,000 square miles, approximately the size of the West Virginia, or Denmark, it stands out as a premier tourism destination in Latin America for travelers drawn by its intense biodiversity. After experiencing some of the highest rates of deforestation on the planet in the 1960’s and 1970’s, Costa Rica engineered radical measures in the past two decades to reverse this alarming trend. One quarter of its land has been set aside for national parks and nature preserves. The country can now boast to being host to a startling five percent of the world’s biodiversity, including more than 800 recorded species of birds, 200 species of mammals, and 900 kinds of trees. Costa Rica attracts over one million foreign ecologically-minded tourists per year. 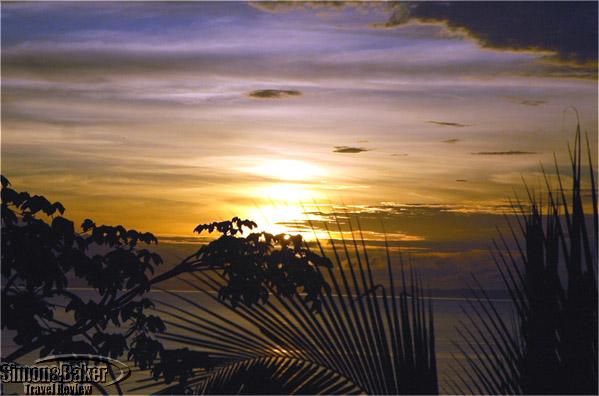 The Lapa Rios Ecolodge has garnered so many awards and accolades in recent years that I approached it with high expectations; these were promptly exceeded! No words or trophies could have prepared me for the breathtaking reality of Lapa Rios. The site was spectacular. Perched high on the tip of Costa Rica’s remote Osa Peninsula, the resort discretely blended into a private nature preserve that spread over 1,000 pristine acres of one of the last remaining lowland tropical forests in Central America. The main lodge, built at the top of a 350-foot ridge, housed the reception area, restaurant and bar. From there, 16 private bungalows were strung through the lush tropical vegetation along a sloping 500-yard long path of steps and bridges that connect three ridges. Like the main lodge, all the bungalows were built exclusively of local materials, topped by high pitched roofs thickly thatched with Suiita palm and casually decorated with comfortable bamboo furniture. Each bungalow featured a private deck and patio, complete with outdoor shower, and a sumptuous view of the forest canopy rippling down to the gentle waters of the Golfo Dulce. Fifteen miles across the gulf, the rolling hills of the mainland fade in the distant haze.