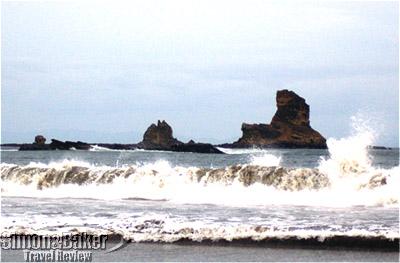 The outstanding natural surroundings of the Morgan’s Rock Hacienda and Ecolodge, combined with the luxury of its accommodations and the friendly service provided by its ever attentive staff, should earn the resort high rankings by any standards. However, what made Morgan’s Rock unique was the success of its creators in translating their commitment to nature conservation, reforestation and community development into a retreat of exceptional architectural and esthetic quality.

A country rich in unspoiled natural beauty and friendly people, Nicaragua is still often overlooked by foreign visitors wary of its turbulent past. In fact, Nicaragua has been a peaceful democracy for well over a decade, and has now made the development of tourism a national priority. The country, the largest in Central America (50,000 square miles, slightly smaller than the State of New York), boasts the greatest expanse of primary rainforest north of the Amazon basin and the largest freshwater body in Central America, Lago de Nicaragua. With its abundant wildlife and spectacular scenery, Nicaragua has been thriving to capitalize on these natural assets to emulate its Costa Rican neighbor and become an eco-tourism haven. To this end, 84 nature preserves have been created, protecting more that seventeen percent of the country’s landmass.