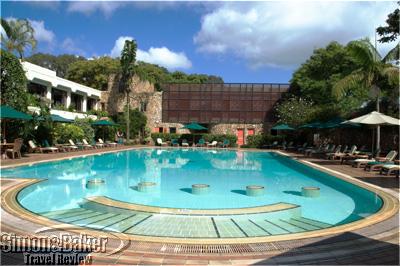 Nairobi was the last stop on my recent Kenya itinerary. After two weeks in the glorious isolation of remote bush camps, I wanted to ease back into the modern world before boarding the long flight home. The Nairobi Serena Hotel proved to be the ideal retreat for my transition. Located at the edge of the city’s Central Park and surrounded by its own lush tropical gardens, the Nairobi Serena offered an oasis of serenity in the heart of Africa’s fourth largest, and one of its most vibrant, cities.

Porini Lion Camp far exceeded any promise its name may have implied! Lions? I had little doubt there’d be lions. The camp was located in the Olare Orok Conservancy, a 23,000 acre (9,000 hectare) private game reserve on the northwest boundary of the Masai Mara National Reserve, which is reputed for its lions. But even at my most optimistic, I hadn’t expected an entire pride of lions, 17 in all, to materialize in the savannah grass 10 minutes into my first game drive! They were rousing from their afternoon siesta, feigning nonchalance as they began to focus on an approaching herd of zebras. I was able to observe the team effort of their stalking process and the zebra’s ultimate narrow escape. We moved on, only to stop again instants later at the edge of a clearing were a breeding herd of elephants was feeding. I was privileged to observe a newborn elephant calf’s first unsteady steps, and its efforts to figure what to do with its unwieldy nasal appendage in its awkward attempt to suckle. A few feet away, its sturdier week-old cousin was trying to uproot a twig, before loosing interest and taking off, puppy-like, in hot pursuit of a bird. By sundown, without leaving the conservancy, we had also sighted buffalos and a leopard for four of the Big Five! We viewed the “fifth’” at close range early the next morning. Shortly after we crossed the boundary of the Masai Mara National Reserve we happened onto a pair of black rhinos engaged in their courtship ritual. But even this exciting sighting was soon overshadowed by a cheetah and her three young cubs enthusiastically tucking into their impala breakfast. 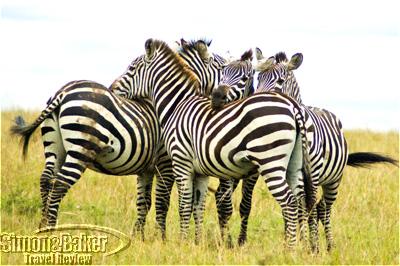 Porini is Swahili for “in the wilds.” Nowhere did I find a more vivid proof of it than at the Mara Porini Camp. The intimate luxury camp was nestled in a soaring grove of yellow-barked acacia, within the Ol Kinyei Conservancy, a private 8,500 acre (3,500 hectare) swath of the Serengeti-Masai Mara ecosystem set aside by the local Masai land-owners for the exclusive use of Mara Porini guests. This pristine wilderness of open savannah plains and rolling hills, riverine forest, permanent streams and spectacular views across the Masai Mara was home for the broad variety of species for which the park is famous, including resident big cats. 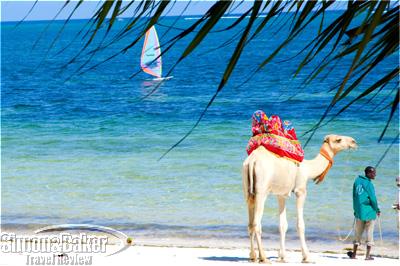 Inspired by the rich architectural tradition of the East African coast, the Serena Beach Hotel stretched along the Indian Ocean shoreline with the exotic appeal of an ancient Swahili town. The property was divided into picturesque clusters of whitewashed two- and three-story buildings, with a central core of elegant public spaces. The reception hall set the mood. Its intricately carved portal led into a cool soaring foyer with lush oriental rugs scattered about the gleaming stone floor. To the left of the entrance the wall behind the long marble-topped reception desk was covered with rows upon rows of letterbox-shaped slots, exact replicas of those found in the harems of Swahili homes until the 19 th century. Now, they made unusual key receptacles. On both sides of the hall, tall pillars led the eye to the far end of the building and the low staircase rising to a landing with a panoramic view of the sun-washed terraces and galleried lounges facing the palm-shaded beach and the cerulean blue sea beyond. 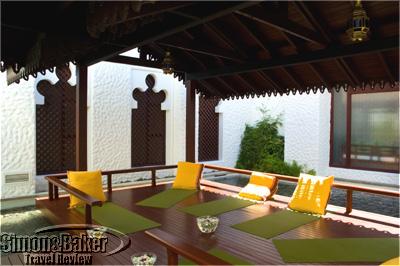 The pundit who declared that “happiness is a journey, not a destination” probably was not thinking of a twenty-four hour trip across two continents in airplanes booked to capacity; and clearly had never experienced the Maisha Spa upon arrival. That is precisely what I did on a recent visit to Kenya: no sooner had I settled into the Mombasa Serena Beach Hotel that I headed for its spa.