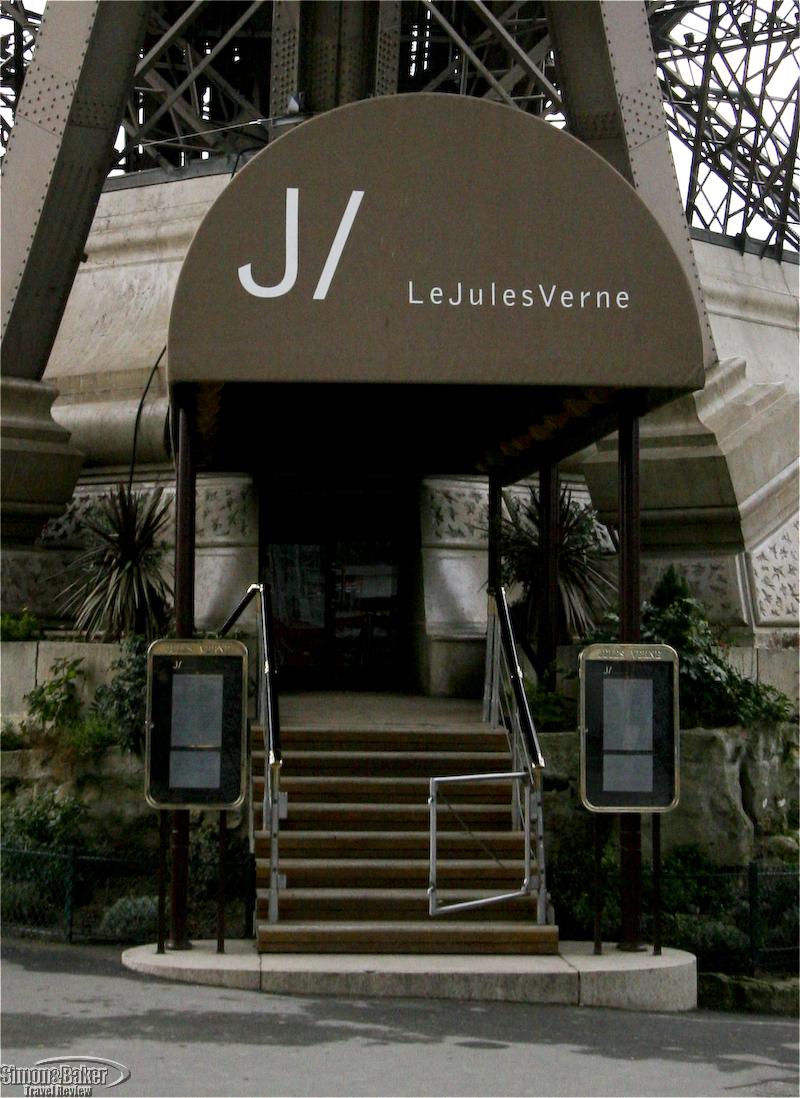 We look forward to returning as soon as we can find a suitable excuse, I mean occasion, to celebrate.


Overall Impression The new Jules Verne, 125 meters above the Paris skyline in the city’s most famous tourist attraction, was delightfully romantic. We were curious about the renovation and new chef and were looking forward especially to lunch. From beginning to end it was a pleasure. A private elevator whisked us directly from the base of the Eiffel Tower to the restaurant. Although the restaurant had seating for 120 guests, it was divided into several dining rooms. Our dining room was intimate and serene.

Our overall experience was worth repeating and recommending thanks to a combination of pleasant and efficient service, stylish and understated décor and an outstanding meal. In addition, our window side table afforded us a magnificent north facing view of the Seine and one of the city’s most exclusive neighborhoods. Even on a gray winter day the view was stunning.

Inside the venerable restaurant the setting was memorable. We noticed the distinctive Jules Verne dinnerware and Orfrevie de France silverware as well as countless details to remind us this was a special place, the gourmet restaurant at the Eiffel Tower. It was the kind of place we want to return to for special occasions like birthdays, holidays, and anniversaries.

Every table, save one, in our corner of the dining room was a couples table. At least one young man looked like he might be proposing that day, and at a nearby window side table we spotted an international rock star celebrating his wife’s birthday with a surprise gift brought by a waiter. They looked very happy.

This renewed French landmark restaurant has a new lease on life. We greatly enjoyed the world class contemporary French dining and romantic setting with an impressive view. We look forward to returning as soon as we can find a suitable excuse, I mean occasion, to celebrate.

About The Executive Chef Chef Féraud began his career at the Negresco Hotel in Nice. He later worked at the Lucas Carton (now Senderns) where he was promoted to chef de partie after seven months. From there he worked at the Elysée and in 1996 became comis at Luis XV in Monaco. After that he worked at L’Orangerie in Los Angeles before returning to Paris to work at La Maison Blanche in 2001. Then he rejoined the Ducasse team as executive chef at Spoon at Sanderson in London for four years until the opportunity at the Jules Verne developed.

Handicapped Access There was an elevator from the ground level entrance.

Location On the second level of the Eiffel Tower at the south Pillar, about 125 meters above ground.

Managed The French monument is operated and managed under a public service contract by Société d’Exploitation de la Tour Eiffel(SETE), a public-private partnership, in which the City of Paris has a 59.9 percent stake.

Opened-Renovated Although the Eiffel Tower opened to the public in 1889, Le Jules Verne as it exists today was only built in 1983. The latest reincarnation of the tower’s restaurant was completed December 2007.

Owned The building it is government owned.

Restaurant Manager Frédéric Rouen was in charge of the dining room. Prior to his work at the Jules Verne, he worked at the Royal Club Evian, Connaught Hotel in London, with Joël Robuchon at Jamin and later with Alain Ducasse . Françis Coulon, who has been first maître d’hôtel at LeJulesVerne since 2001 assisted Rouen. Prior to his work at the Eiffel Tower, he worked at Le Clos Longchamp in Paris, L’Oasis in Mandelieu-la-Napoule, the Beau Rivage in Condrieu and the Gavroche in London.

Size The restaurant which is manned by 105 staff members including 47 in the kitchen can accommodate up to 120 guests. We estimated the size to be about 600 square meters.

Sommeliers Amar Chebrek and Roberto Amadei were in charge of the wines. Amadei worked Hilton in Rome, Savoy Palace in London, Tour d’Argent in Paris, first as commis de salle and then commis de sommellerie. In 2006, he joined the Four Seasons George V. Pierre-Jean Cosson selected wines for our meal.

Type Of Restaurant Contemporary French cuisine created “to reacquaint the French with the incomparable talent of their culinary heritage and extends an open invitation to visitors from around the world.”

DÉCor-Ambiance We appreciated the modern and subtle décor which allowed us to focus our attention on the magnificent views of the city. In 2006, Société d’Exploitation de la Tour Eiffel, the entity that operates the Eiffel Tower under a 10 year contract with the city of Paris, charged L’Affiche (Groupe Sodexho) and Groupe Alain Ducasse to modernize the Eiffel Tower’s restaurant services. Patrick Jouin, a designer, emphasized sensual technology and Pierre Tachon, came up with an updated visual identity. One of the first things we noticed, on the cover of the menu, were the monogrammed initials created by Tachon to remind patrons of the elongated silhouette of the monument. Within the restaurant soft shades of beige and dark brown were predominant. Distinctive design elements integrated into the classic restaurant include honeycomb walls that allow guests glimpses of the wait staff, carbon fiber chairs produced by Pininfarina, a glass wall at the centre of the restaurant, and fixtures hanging from the dining room ceiling designed to remind guests of Paris street lamps.

Staff uniforms were by Lanvin 15 Faubourg. There were French porcelain J.L. Coquet plates, and plates, including the distinctive presentation plate, specially designed for Le Jules Verne by Pierre Tachon of Soins Graphiques. There were also rare items from the Orfèvrerie Béard in Montreux, silver-plated nickel-silver cutlery designed by the Orfèvrerie de France, and ebony carving knives crafted by the Coutellerie Chambriard in Thiers. There were also MD Crystal and carafes from the Vallerysthal glassworks in Lorraine.

Cellars Wine And Alcoholic Beverage Selection Emphasis was on French wines. The list was assembled by Gérard Margeon, chef sommelier of Groupe Alain Ducasse, featuring 430 wines from the country’s well known wine growing regions, where Burgundy, Rhone and Bordeaux held a place of honor. His idea was to place on offer little-known premier estates, whose production is generally reserved for export and not often sampled domestically as well as to showcase the new generation of wine growers with their own views on wine production. Bordeaux options were divided into premiers crus (first growths), each represented by two vintages; “juniors” also described as the finest “second wines” of the premiers crus; seconds crus; and appellations such as Montagne Saint-Émilion, Saint-Georges Saint-Émilion, Lussac Saint-Émilion and Lalande de Pomerol. Guest’ bottles were kept in insulated compartments inside special consoles. There were also four types of armagnac, single-malt whisky from Haute-Champagne aged in wine barrels, Irish, Scottish, Welsh and Japanese whiskies, Polish vodka and California gin. Although prices ranged toward the higher end of the spectrum, as is frequently the case in gourmet restaurants, we spotted a number of affordable bottles of about 60 euros.

Special Menus There was a three course Menu Dejeuner (Lunch Menu) available Monday to Friday for lunch for 85 euros (120 euros with wine pairing); and a six course Gourmet Tasting Menu for 200 euros.

Other The redesign of the restaurant was a challenge in many ways. All eyes were on the transformation in part because of the building’s iconic nature. There were also issues related to the building’s structure itself. Space was limited, and engineers had to constantly and carefully monitor the weight of the materials and equipment; there were also countless safety constraints (no gas is allowed in the building, for example) and environmental issues that had to be taken into account. By contract renovation work was to be completed within a 120-day schedule.

To adjust to the space constraints of the Eiffel Tower kitchen, 70 square meters of additional kitchen space were set aside in a nearby building beneath the Champs de Mars,100 meters from the South Pillar where the restaurant is located. It was there that raw materials such as fish and vegetables were first processed before they being transported to the main kitchen of Le Jules Verne.

As we departed one of the staff members handed us a complimentary madeleine pastry to take home. For those wishing something more lasting there were souvenirs available for purchase among them the “Structure” presentation plate by Pierre Tachon we had seen at our table when we arrived, books by Alain Ducasse and numbered porcelain dolls created by Alber Elbaz for Lanvin.

Service Service was cordial and attentive. 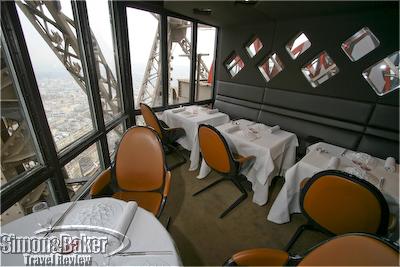 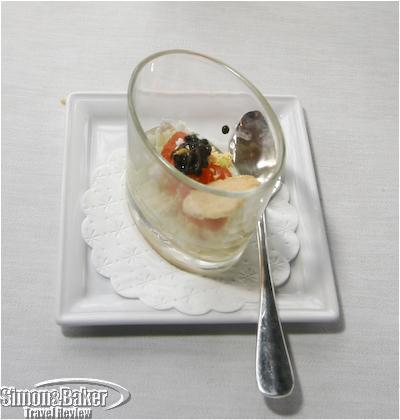 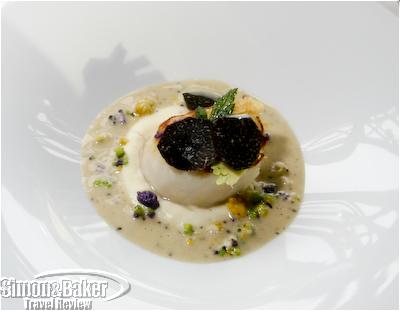 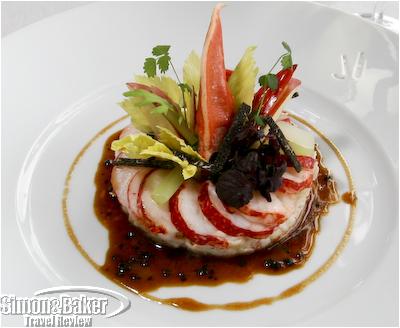 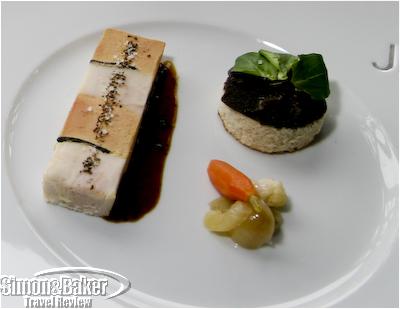 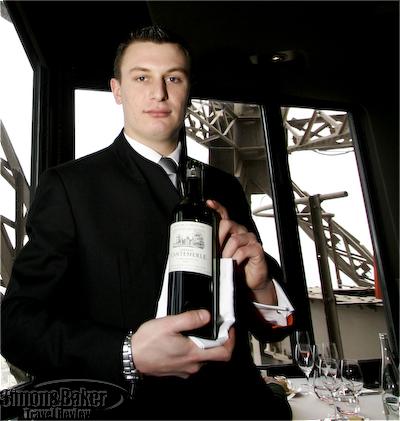 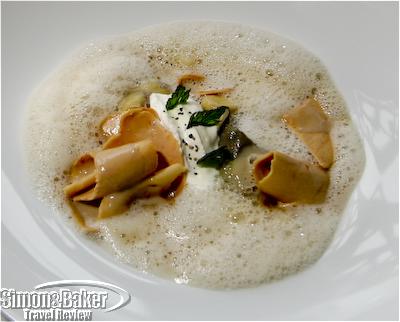 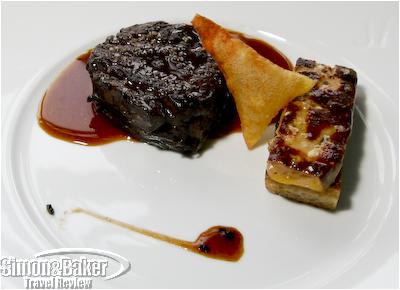 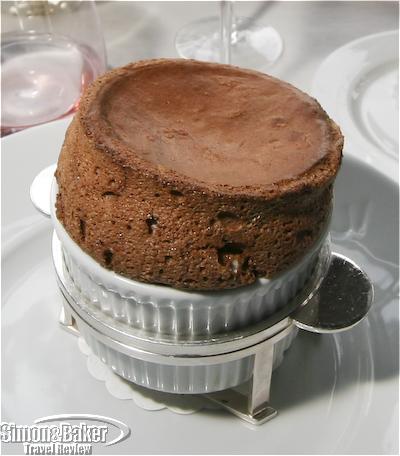