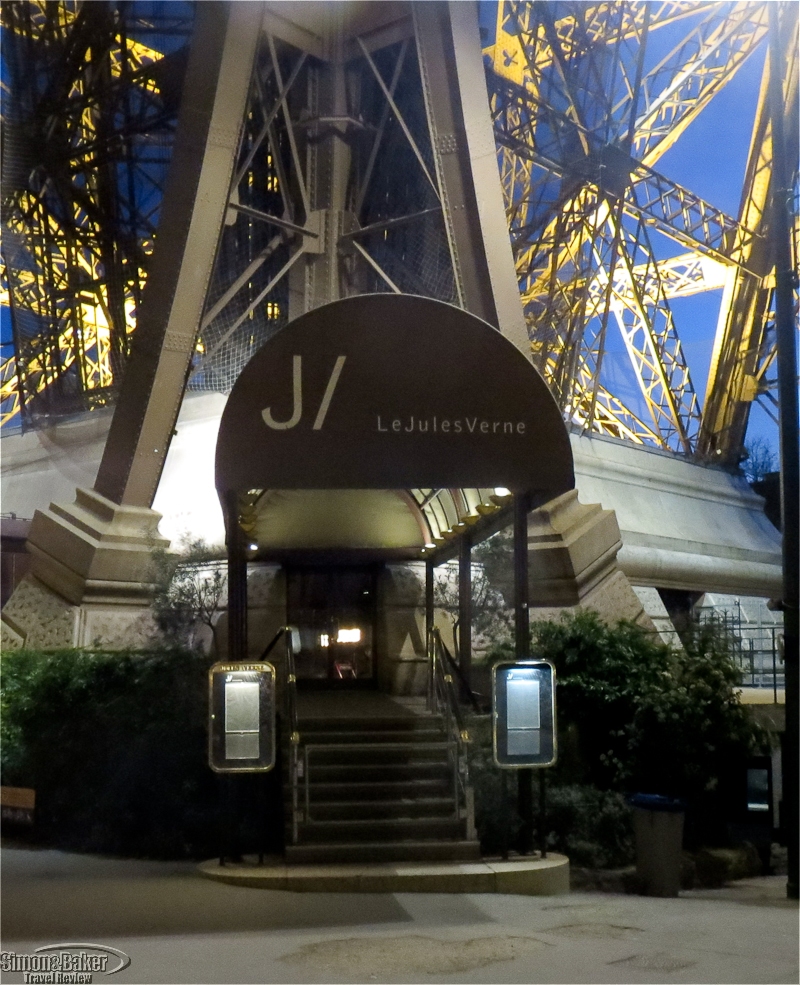 Undecided, we concluded whatever time we chose it would likely be yet again a worthwhile romantic meal.


Overall Impression As we approached the Eiffel Tower we realized we were in for a treat. The days long pattern of gray cloudy weather had broken. In its place, puffy clouds contrasted against a cerulean Parisian sky. Two uniformed staff members greeted us at the restaurant’s dedicated ground floor entrance past its understated brown awning. Once they confirmed our reservation for that day, we had to pass through a metal detector while one of the staff searched our personal belongings. The restaurant’s heated elevator, manned by another uniformed staff member, led us directly to a reception area where additional personnel greeted us, whisked away our winter coats and led us to a window side table with a metal bar in the middle and a striking view to the northeast.

Sitting atop one of the world’s most iconic monuments enjoying a panoramic view of Paris could have been enough to justify lunch at Le Jules Verne. Our experience was ever so more rewarding thanks to sunny if somewhat hazy weather, and the seemingly effortless orchestration of our meal by the polite staff of the well known restaurant.

Every course of our elegant meal was delicious, artfully presented and served. Contemporary décor set the stage. There was little on the table other than crisp linen, sea salt and pepper to distracts us from the cityscape below. Comfortable seats and refined dinnerware enhanced the ambiance. At our request, the friendly and helpful sommelier selected wines to match our order. From the well chilled brut house champagne to the langoustines and the cookpot vegetable (a house specialty) appetizers through mains and desserts we enjoyed every morsel and every minute of the spectacular view. Our neighbors at nearby tables seemed equally mesmerized.

When the meal ended we sighed, contented, pondering whether we would rather return for lunch or revisit Le Jules Verne as the lights of the city sparkled at night. Undecided, we concluded whatever time we chose it would likely be yet again a worthwhile romantic meal.

About The Executive Chef Chef Feraud began his career at the Negresco Hotel in Nice. He later worked at Lucas Carton (now Senderens) where he was promoted to chef de partie after seven months. He worked at the Elysee, and in 1996 became comis at Luis XV in Monaco. He worked at L’Orangerie in Los Angeles before returning to Paris to work at La Maison Blanche in 2001. For four years he worked with the Ducasse team as executive chef at Spoon at Sanderson in London until he transfered to Le Jules Verne.

Handicapped Access There was an elevator from the ground level entrance. A small restroom was on the same level as the dining room.

Location On the second level of the Eiffel Tower at the south Pillar, about 125 meters above ground.

Managed The French monument was operated and managed under a public service contract by Société d’Exploitation de la Tour Eiffel (SETE), a public-private partnership, in which the City of Paris had a 59.9 percent stake. The restaurant itself was managed by the Groupe Alain Ducasse company.

Opened-Renovated Although the Eiffel Tower opened to the public in 1889, Le Jules Verne as it exists today was only built in 1983. The most recent renovations were completed December 2007.

Owned The building was government owned.

Size The restaurant had capacity for 120 guests. It was manned by 110 staff members including kitchen personnel. We estimated the size to be about 600 square meters.

Sommeliers Amar Chebrek and Roberto Amadei were in charge of the wines. Amadei worked at the Hilton in Rome, Savoy Palace in London, Tour d’Argent in Paris, first as commis de salle and then commis de sommellerie. In 2006, he joined the Four Seasons George V.

Type Of Restaurant Contemporary French cuisine created “to reacquaint the French with the incomparable talent of their culinary heritage and extends an open invitation to visitors from around the world.”

DÉCor-Ambiance Understated contemporary furnishings invited us to focus our attention on the magnificent views of the city. There was a small dish with sea salt and a pepper mill on our table. In 2006, Société d’Exploitation de la Tour Eiffel, the entity that operates the Eiffel Tower under a 10 year contract with the city of Paris, charged L’Affiche (Groupe Sodexho) and Groupe Alain Ducasse to modernize the Eiffel Tower’s restaurant services. Patrick Jouin, a designer, emphasized sensual technology and Pierre Tachon of Soins Graphiques, developed a contemporary visual identity. On the cover of the menu the monogrammed initials created by Tachon were designed to remind patrons of the elongated silhouette of the monument.

Within the restaurant, soft shades of beige and dark brown were predominant. Orange seats added a splash of color to chase away the gray of fall and winter. Distinctive design elements integrated into the restaurant were honeycomb walls, carbon fiber chairs produced by Pininfarina, a glass wall in the center, and fixtures hanging from the dining room ceiling to remind guests of Paris street lamps.

Staff uniforms were by Lanvin 15 Faubourg. There were French porcelain J.L. Coquet plates, and plates, including the distinctive presentation plate, specially designed for Le Jules Verne by Tachon. There were also rare items from the Orfevrerie Beard in Montreux, silver plated nickel silver cutlery designed by the Orfevrerie de France, and ebony carving knives crafted by the Coutellerie Chambriard in Thiers. There were also MD Crystal and carafes from the Vallerysthal glassworks in Lorraine.

Cellars Wine And Alcoholic Beverage Selection Emphasis was on French wines. The list featured 430 wines from the country’s best known wine growing regions, where Burgundy, Rhone and Bordeaux held a place of honor.

Meal We began with a glass each of house label brut champagne. Cereal and Emmental bread sticks arrived with the bubbly. Moments later, we were offered our choice of bread. Cereal, sourdough, brioche, and baguette were the choices. Pre appetizer bites were next: pumpkin with smoked duck and fresh cream.

We shared a cheese plate. There were four cheeses and jams or compotes to match each. Pear accompanied the chevre, hard cheese was served a chili compote from the Pays Basque, Munster with bacon and walnuts, and blue of Armagnac with a creamy yogurt type substance crowned with beet root shavings. The wine steward matched wines by the glass with our meal.

For dessert, we had L’ecrou croustillant au chocolat de notre manufacture a Paris, glace noisette Crispy “Tower nut” (chocolate from Le Chocolat Alain Ducasse Manufacture a Paris and praline, hazelnut ice cream), a dark chocolate for my lunch partner; and pear souffle served with a side of raw pear for me. It was airy with a hint of almond flavor. For post dessert one of the staff members set a colorful tray of caramel shortbread, chocolate macarons, and white chocolate and mango bites in the middle of the table. There were also powdery truffle squares and marshmallows, each in their own bowl to tempt us.

Other As we departed one of the staff members handed us a bag of complimentary madeleine pastries (least favorite) to take home. There were souvenirs for sale such as the Structure presentation plate by Pierre Tachon and books by Alain Ducasse.
Date Of Review December 2013

Service Staff members were friendly without ever being intrusive. They went out of their way to assist us in English, describing the dishes and their ingredients as they presented them to us. 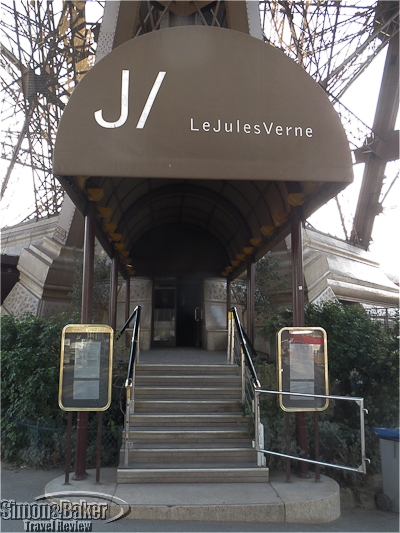 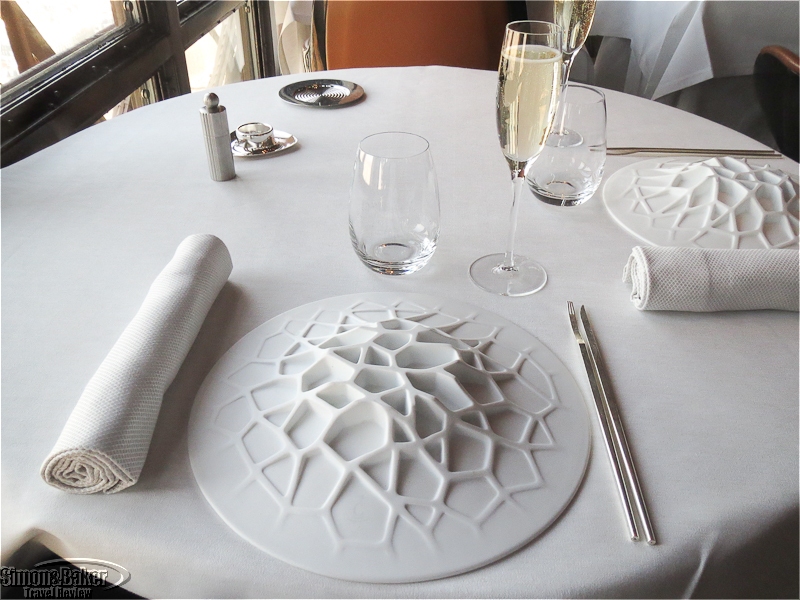 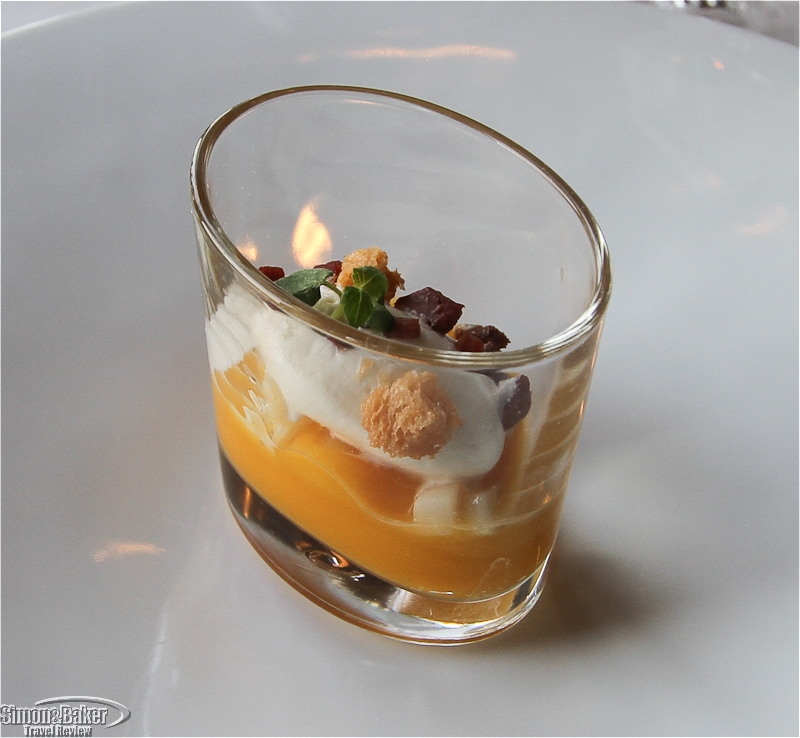 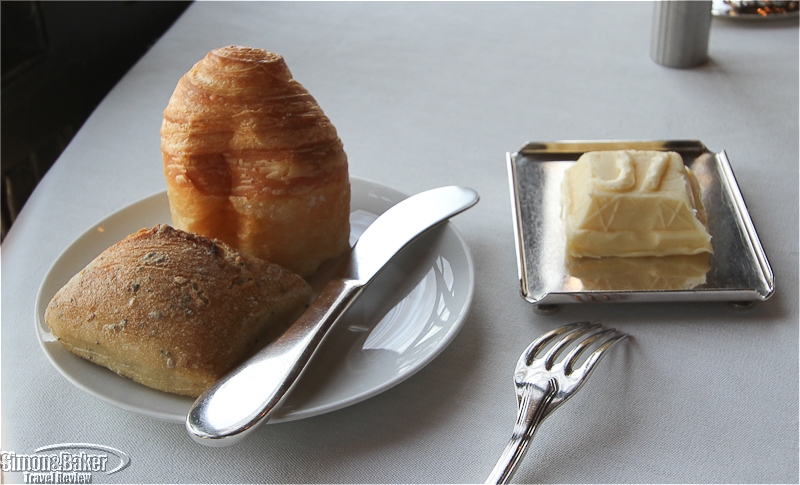 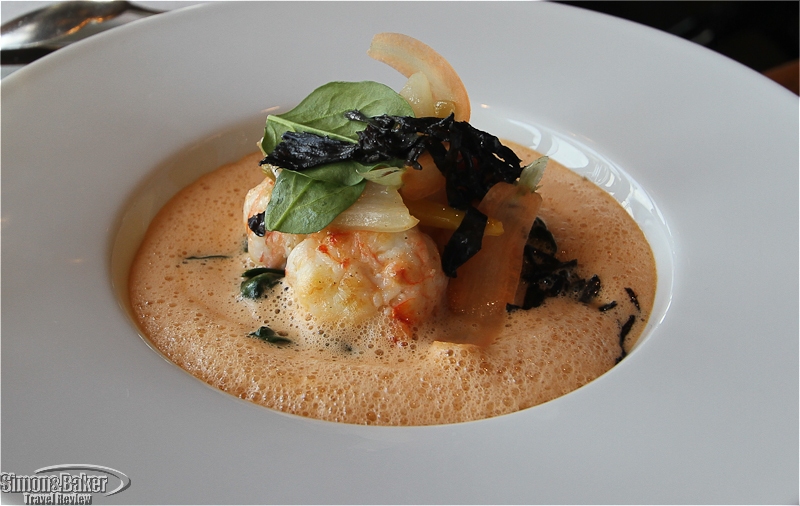 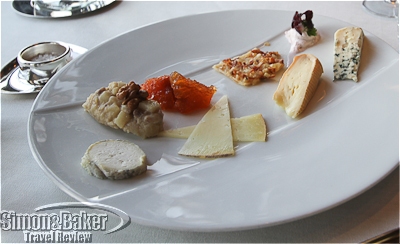 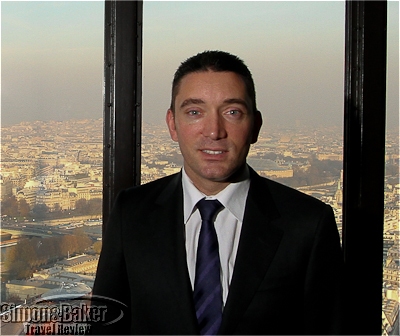 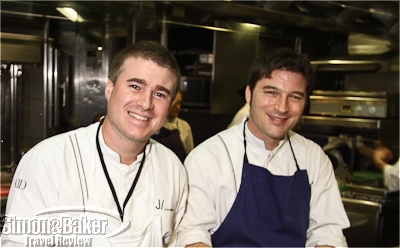 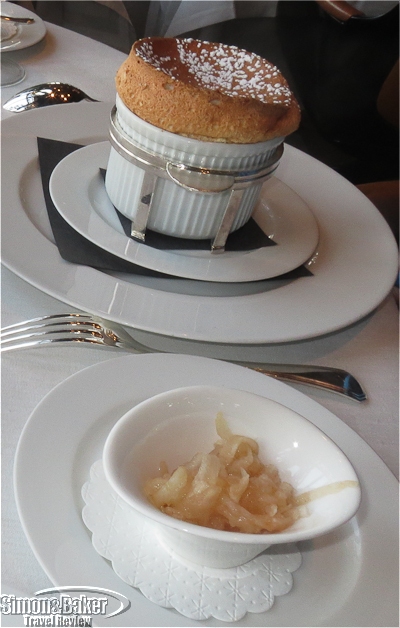 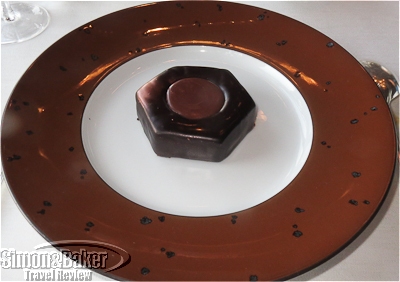 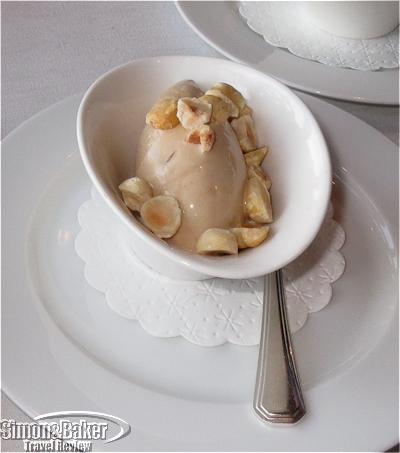 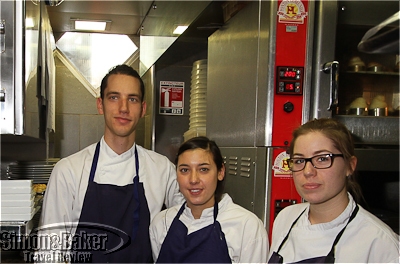 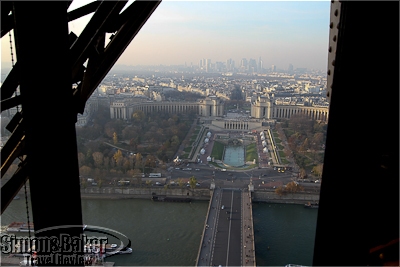 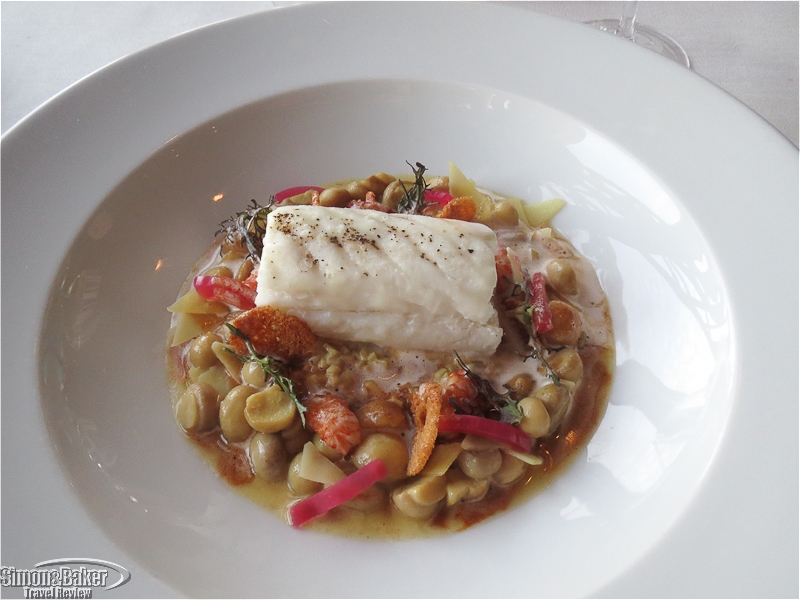