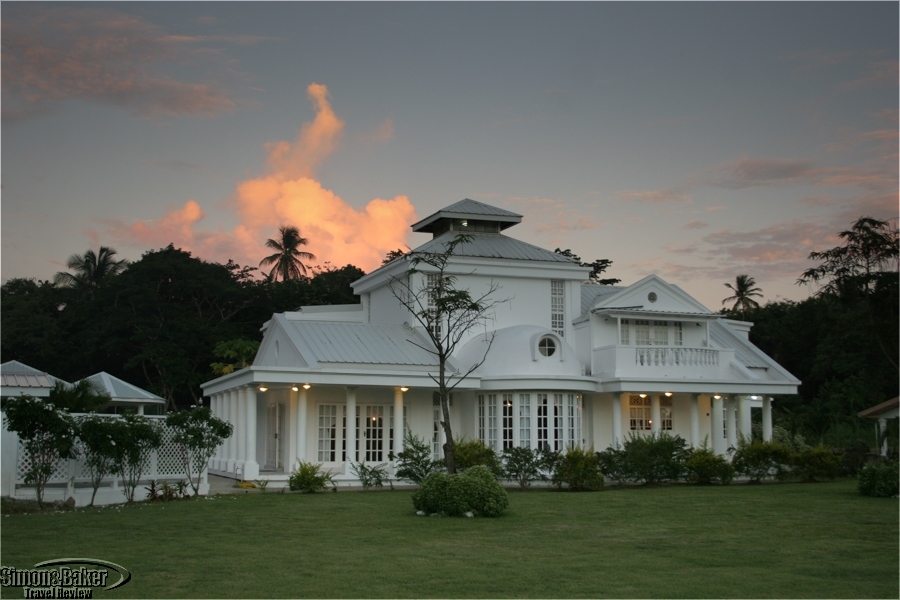 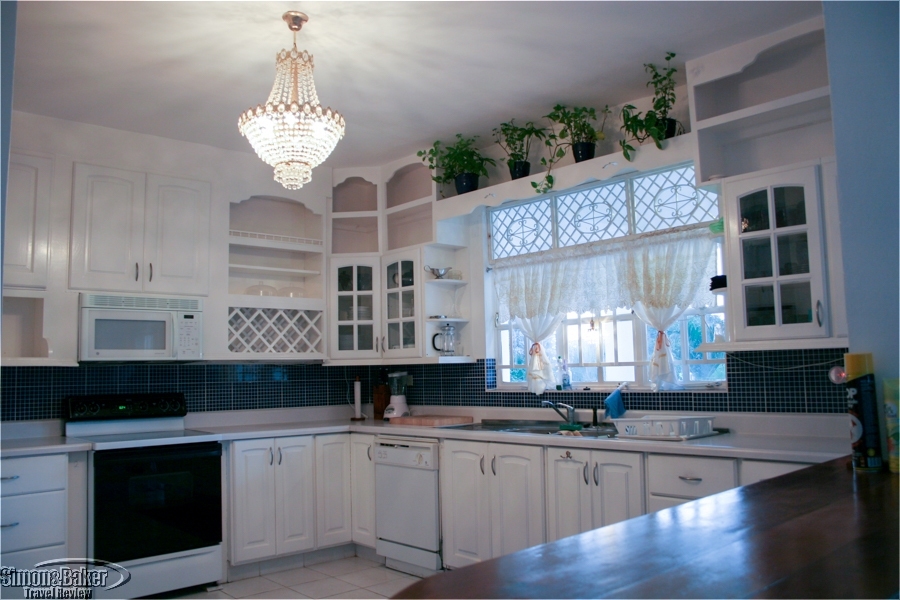 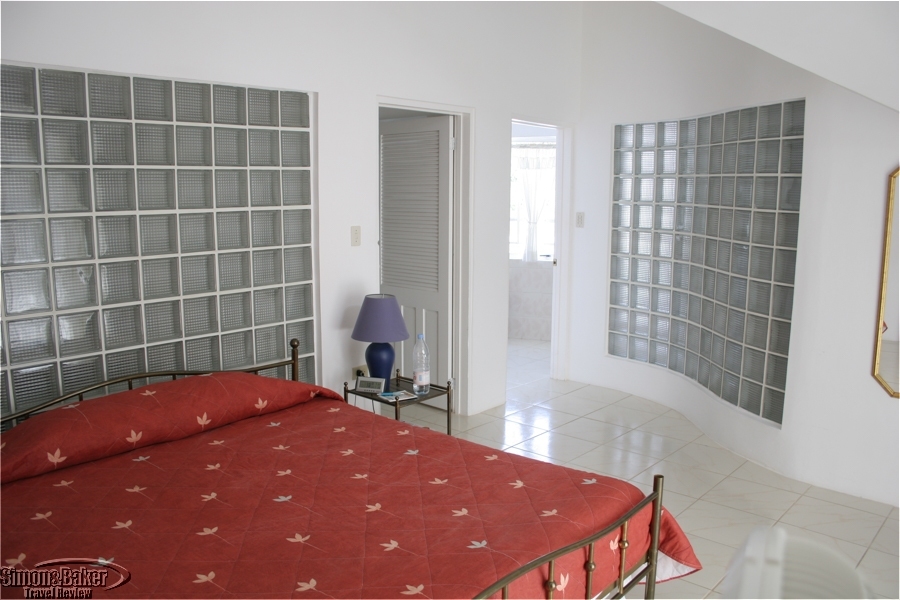 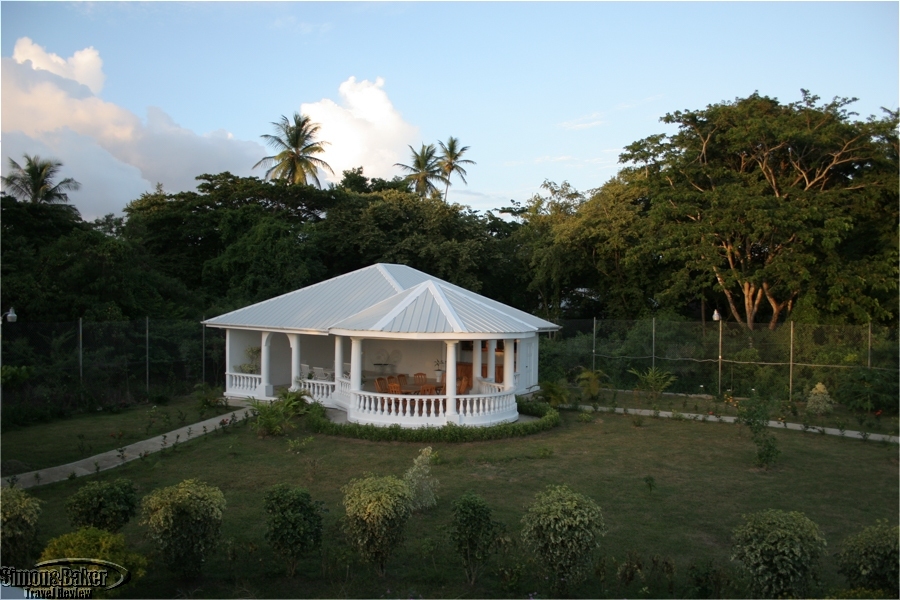 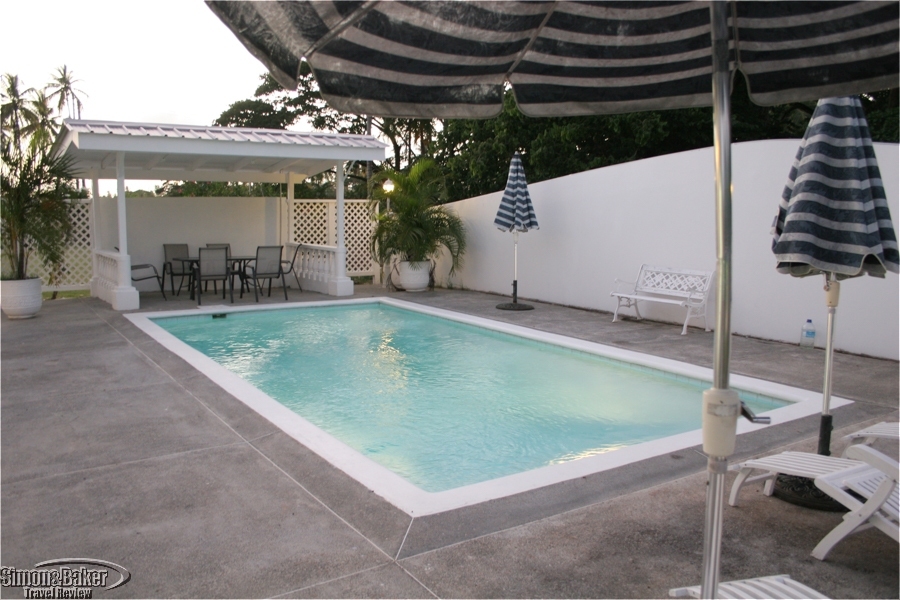 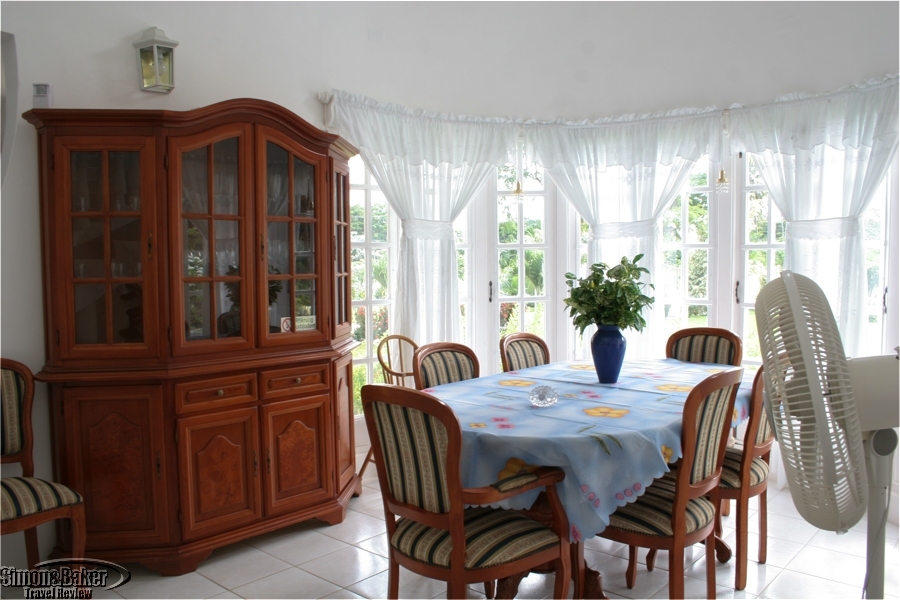 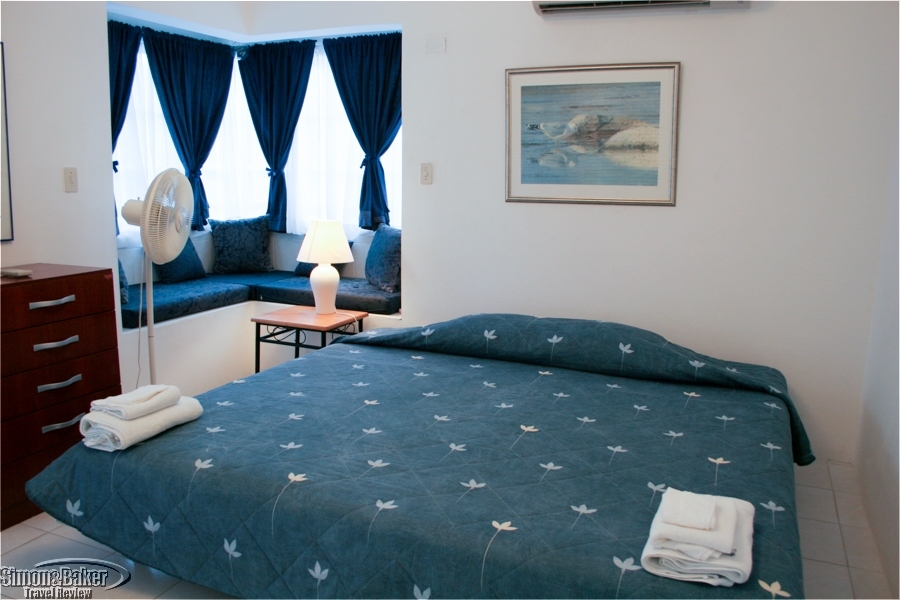 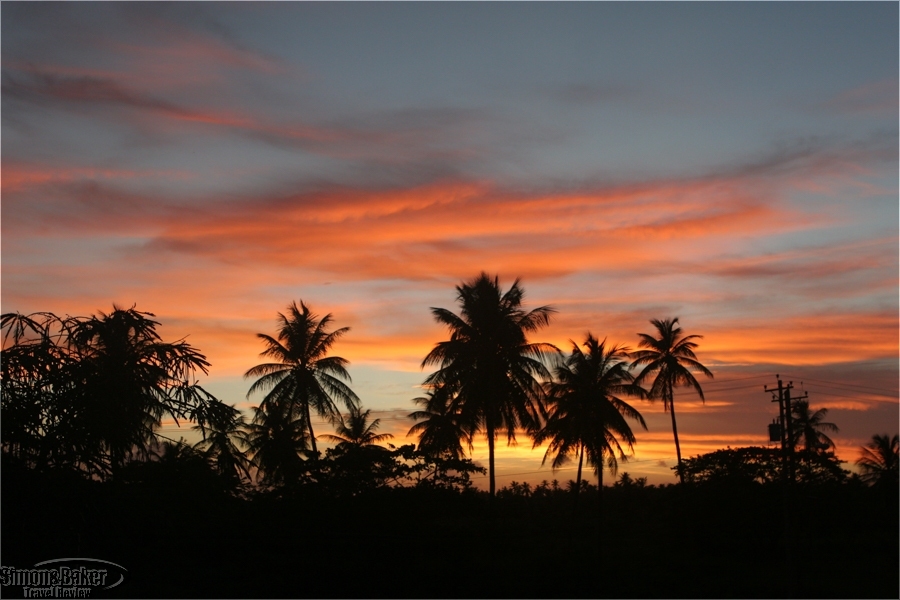 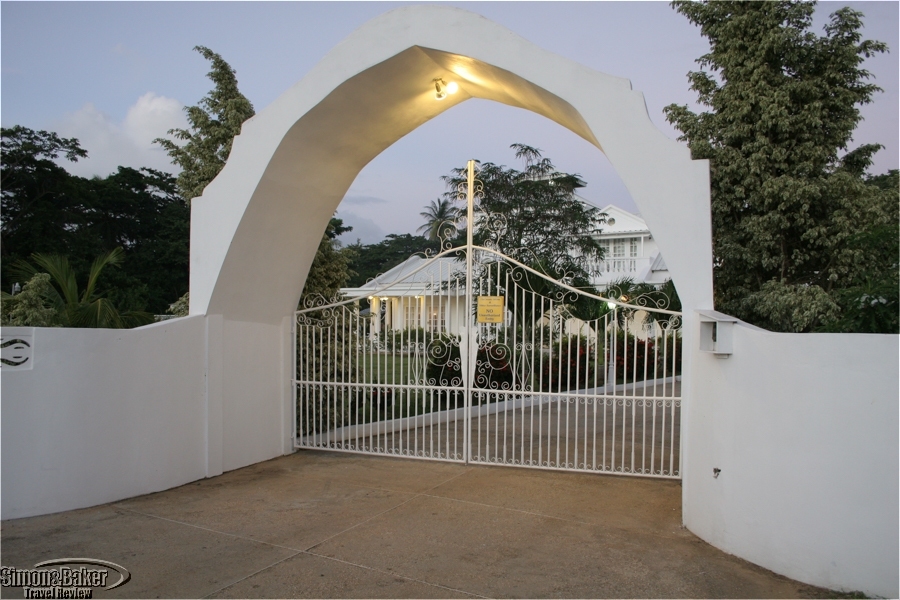 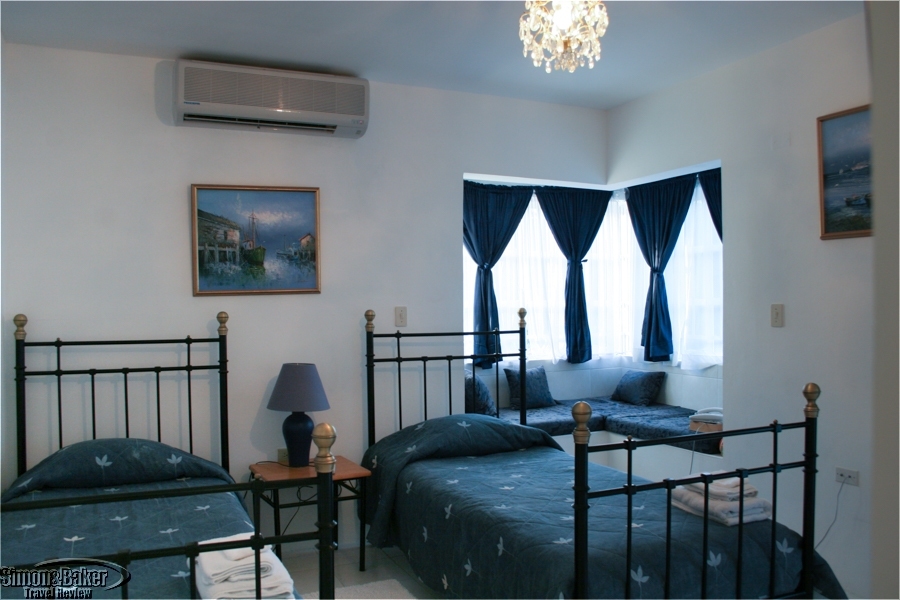 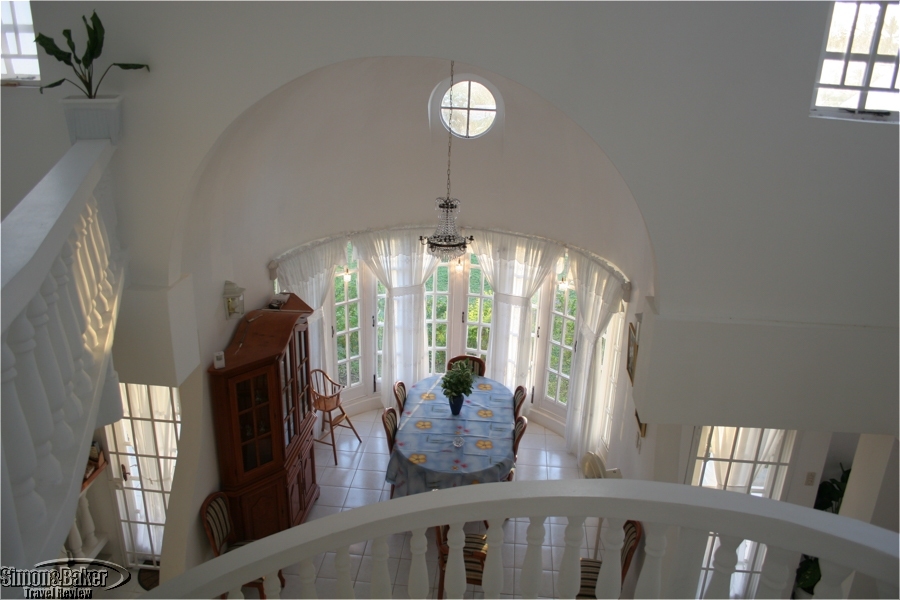 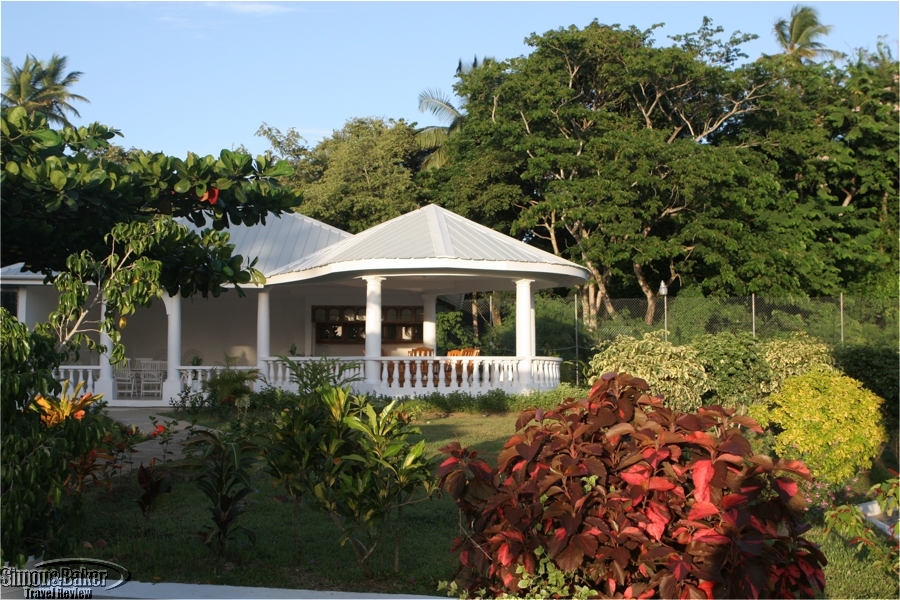 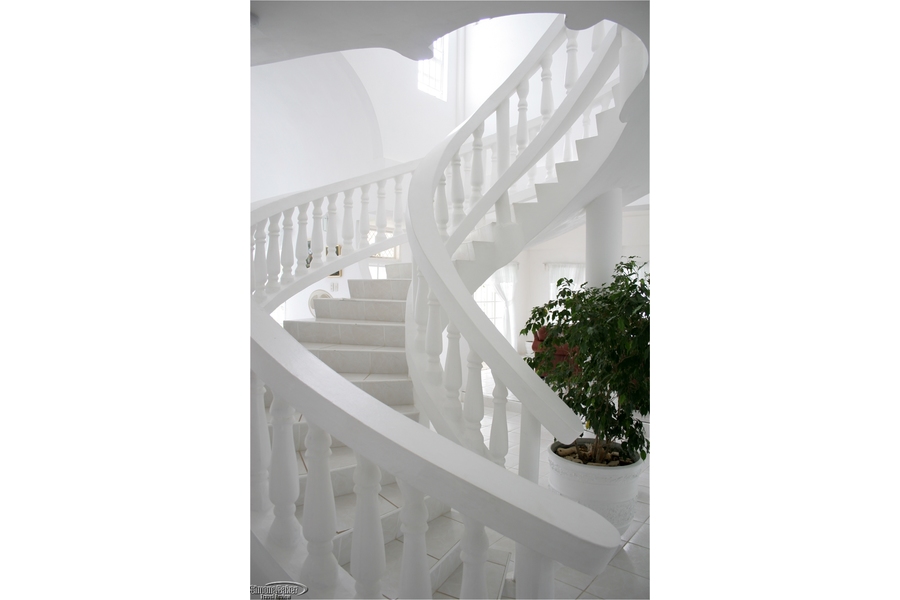 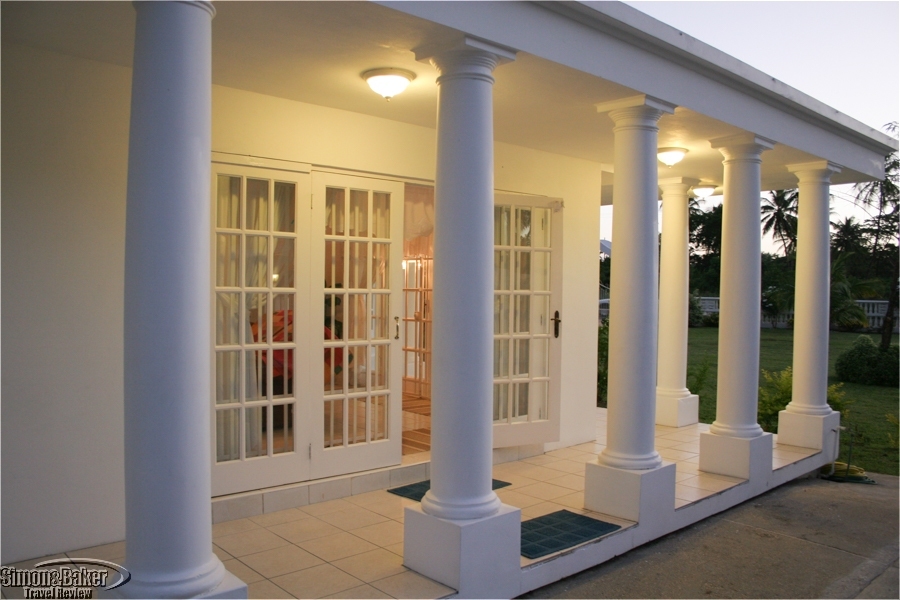 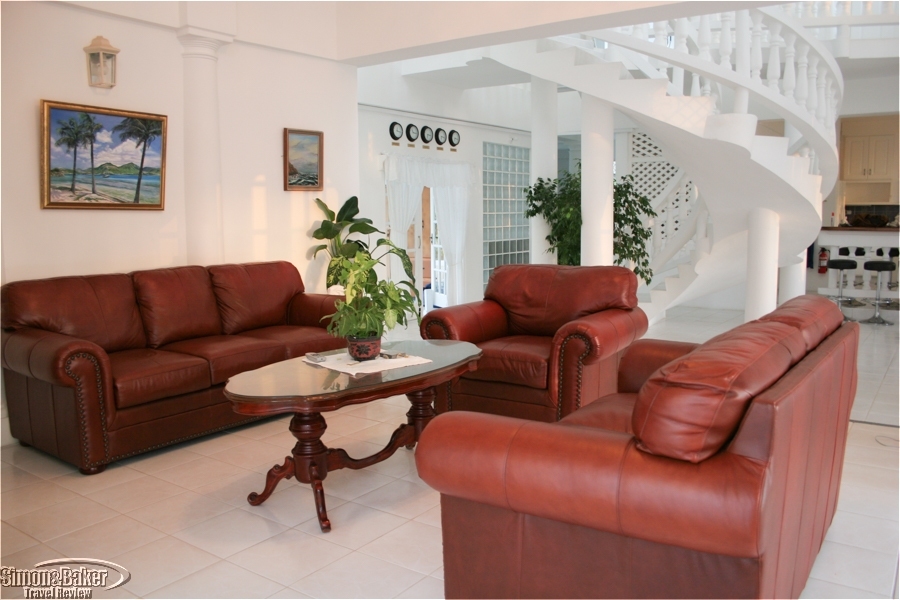 By the week’s end we had found our favorite areas in the house, identified preferred dining spots, tourist attractions and grocery stores nearby, and would gladly have remained another week.


Overall Impression Villa de Lena, like Tobago, was a journey of discovery. We began the journey as curious visitors and ended it as friends. The two story $1.2 million villa occupied 374 square meters. It was well situated in a residential district near the tourist areas on the western end of Tobago. This meant our street was quiet with little traffic. At the same time we were within a five to 10 minute drive to the airport, tourist attractions, the Store Bay market and food stalls, restaurants, hotels, souvenir shops and tourist activities such as diving and water sports.

The Villa was homey, spacious and designed for comfort and with island élan. It was a pleasant place to spend time when we felt like relaxing in between activities and discovering Tobago. The house had many doors. Opening them allowed the sea breezes in, cooling the areas downstairs (only the bedrooms were air conditioned). Each of the doors and many windows had wrought iron gates with individual locks. It took some effort initially to open and close all the doors and wrought iron gates around the house every time we went out or arrived back. By the end of the week, we had integrated those tasks into our routine and performed them easily. Although we were bitten fiercely by mosquitoes and no-see-ums in many other parts of Tobago, Villa de Lena was blissfully mosquito free during our stay.

Prior to our arrival on the island our interaction with Trinidad and Tobago native and villa owner Mervyn Sifontes was positive and informative. Every time we exchanged emails or spoke on the phone he was gracious and responded to our questions with patience and genuine warmth. The day after we arrived and during out stay, he called from Sweden to make sure we had everything we needed.

Having Internet access and satellite television was wonderful. This allowed us to check urgent messages and find out the latest news. At the same time, since the Internet service was via dial-up there was little temptation to stay online for anything but the most urgent issues. We enjoyed our stay in Villa de Lena which lent itself to poolside and indoor relaxation, providing many of the comforts of home and ample space for families of two or more to vacation together. The Villa’s convenient central location was practical while its attractive design and clean white interior made it appealing. By the week’s end we had found our favorite areas in the house, identified preferred dining spots, tourist attractions and grocery stores nearby, and would gladly have remained another week.

Connectivity There was access to the Internet via a dial-up connection on the owner’s computer. Although it was much slower than high speed Internet access, it was good enough to check urgent messages during our time away.

Length Of Stay One week

Common Areas The property was surrounded by a six foot white concrete wall facing the road on one side and a tall chain link fence circled the remaining side and back. Landscape gardens surrounded the house serving as home to many birds. The main entrance to Villa de Lena was next to a porte cochère on the side of the villa, a short drive from the entrance gates. The floor for the entire house was of 12 inch (18 in the master bedroom) white ceramic tile. The housekeeper requested we take our shoes off while in the house. There was a rack near the front door where we left our shoes. The floor inside the house was clean enough to walk barefoot.

Caribbean sunlight filtered through windows and doors immersing the house in warm light through most of the day. Indoor wrought iron gates covered almost all the windows and doors. There were live (and artificial) plants peppered through the downstairs rooms. There were also fans in several of the downstairs areas including the TV room, and office dining and living rooms. Oil paintings, from Israeli, Russian and Swedish artists, hung on the walls.

To the right of the entrance there was a small television room housing a brown leatherette set comprising a sofa and two swivel armchairs. There was also a glass covered wood table and a 36 inch satellite TV with 50 channel options. To the left there was a 100 square foot office facing the front yard. It had a desk, office chair with wheels, book shelf, phone, fax machine, printer and Dell computer and monitor. There was a half bathroom (toilet and sink) across from the television area.

The soul of the house was situated in a large room, with an extra tall ceiling, at the end of the entrance hallway. Its most salient feature was a spiral staircase leading to the second story sleeping area. The room also connected to a covered garage at the foot of the staircase. To the left there was a large open kitchen and laundry room. A long wood countertop with six stools for quick meals and snacks separated the kitchen and staircase rooms. A formal dining area was next in a rounded space facing the front yard. It was home to a wood and cloth dining set for six with spare chairs. There was also a cabinet on one side and windows on three sides. To the other side there was a living area with similar furniture to the one in the TV room and a CD player. A step from there was the pool area and beyond it an oversized gazebo and back yard.

The second story was occupied by the sleeping quarters. There was a master suite with its own bathroom and two additional bedrooms which shared a small bathroom. Also on the second floor there was an open terrace with lounge chairs facing the backyard.

DÉCor The house was decorated mostly in white. The comfortable furniture was imported from Italian and Scandinavian. The décor was a blend of casual European and Trinidad and Tobago styling. Trinidad architect John Yearwood, from the firm Archisis, designed Villa de Lena to be identical to another home in Trinidad.

Bathroom A door led to a rectangular well lit bathroom. Double sinks faced a large mirrored wall. White curtained windows ran two thirds of the length of the bathroom. Toward the back of the bathroom there was a toilet, bathtub and shower.

Rooms Our 600-square foot air conditioned master suite was on the upper floor at the top of the spiral staircase. It had an en-suite bathroom, walk-in closet with safe and small open terrace facing the front garden and Bon Accord Estate Road beyond the property wall. A window facing queen bed with a brick red flower patterned bedspread occupied the center of the room. A remote controlled air conditioning wall unit kept the suite fresh allowing us a cool night’s rest. There were glass and metal night tables and lamps on either side of the bed. A wood dresser and rectangular mirror sat in a corner. Double curtains hung over the terrace doors, one curtain was white and the other navy blue. A chandelier style lamp hung in the center. A glass brick wall divided the walk-in closet and the room; a smaller glass brick wall stood between the shower in the bathroom and the room.

Amenities There were plenty of linens (some sheets were a bit aged), including pool towels, crockery, cutlery, glassware, safety box.

Pool The pool was set on a terraced area to the side of the house opposite the porte cochère. It housed several lounge chairs and two umbrellas to provide shade from the sun. There was a covered dining area to one side near the pool. There was also a 100 square meter gazebo ideal for receptions on the edge of property. It had a wet bar and hot plate, dining and sitting areas.

The pool itself sloped at steep angles from the edges toward the middle. It was 4 x 8 meters in size and approximately 1.85 meters deep. The owner explained that the architect felt that such a design matched the unique house plan. At the same time, the owners feel the slopes accommodate none swimmers and kids. There was an outdoor shower allowing guests to rinse off before entering the very clean pool.

Other The owner’s motto for Villa de Lena was “Come as a stranger and leave as a friend.” The Villa was well lit at night with interior and exterior lights throughout. Locking the wrought iron gates around the house required multiple keys. This meant we had to plan extra time when we went out to lock all the doors and gates with the single set of keys we received from the housekeeper.

To reach Villa de Lena we had to drive down a gravel road being extra careful with our rental car because there were many potholes on the road making it a bumpy drive. Some taxis and one of the tour guides wouldn’t drive down the gravel road.

Although there were phones throughout the house, phone access was for incoming calls only. The night before our departure, while we were discussing last minute flight changes our airline had made to our flights, our prepaid local mobile phone ran out of time. Although we had charged the phone to last us until our departure, the flight change required much more time than we would have expected. It was impossible to call the airline (or the car rental company) back from the house so we had to rush into town in the rain to find a mobile phone recharge before the airline offices closed for the day. Next time we will purchase extra mobile phone time.

The Villa website was convenient allowing us to glimpse available dates months in advance.

Service Velma the housekeeper looked after the Villa. We only saw her the night we arrived when she greeted us and the morning we left when we returned the keys. Although we noticed she came during the week and changed our towels, we didn’t see her. A gardener and pool cleaner also had access to the property although we didn’t spot them during our stay.

Welcome The housekeeper, Velma, gave us a five minute tour of the villa the evening of our arrival prior to returning to her home.