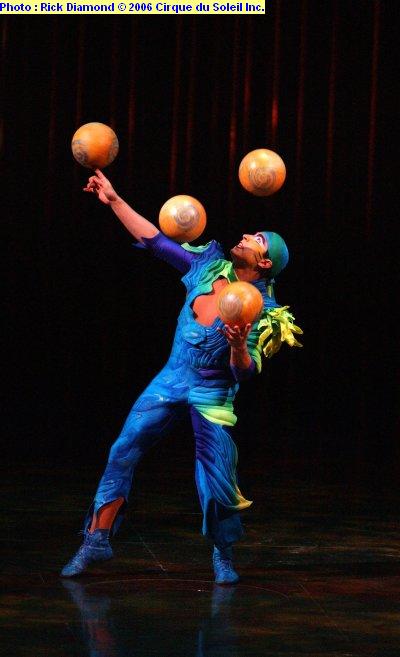 Hats off to Varekai!


Overall Impression We thoroughly enjoyed Varekai, Cirque du Soleil’s colorful two-hour (plus a half an hour intermission) traveling show. Faithful to the Cirque du Soleil tradition, the performance was vivid, exciting, touching, funny, and most of all entertaining. Varekai, meaning “wherever” in the Romany gypsy language, began with an amusing and at the same time tragic clown duo who kept the audience’s attention until a young muscular man, Icarus, descended from the “sky.”  The production which had a flight theme was designed to pay tribute “to the nomadic soul, to the spirit and art of the circus tradition, and to the infinite passion of those whose quest takes them along the path that leads to Varekai.”

We were not surprised to overhear an attendant say our matinee show was sold out. As usual the live music, including two singers, was a treat. This program came alive thanks to the amazing athletic skills, training and vivacious enthusiasm of 50 performers from 14 countries including six musicians. Salient features such as lighting, wonderful and exaggerated costumes in bright colors (designed by Eiko Ishioka), and dynamic choreography made the time disappear. The audience demonstrated their delight and enthusiasm with the performers with two standing ovations at the close of the show.

From our excellent center stage seats (category 1, F1-2 in section 102) in the now familiar trademark blue-and-yellow Grand Chapiteau, we could see most of the stage quite well. This was our favorite traveling Cirque program. We left the show cheerful and enthused, looking forward to the next opportunity to catch a Cirque du Soleil performance. Hats off to Varekai!

Location A traveling show. We saw it at Bicentennial Park in downtown Miami

Transportation We drove there and parked ($20) in an adjacent grass parking area about two city blocks from the entrance.

Description Varekai had that balance of sight and sound so elusive in many shows. The combined efforts of creative and performing staff were in synch. Inspiration for the varied and esoteric music was drawn from many sources including the sounds of Hawaiian ritual, songs from 11 century troubadours, traditional Armenian melodies and gospel music. As with other Cirque shows performers moved around and several skits took place at the same time. This was facilitated by a multiuse performing area. The stage had forest, stage, catwalk, and lookout areas and the forest had 300 “trees” from 15 to 35 feet tall including 20 “acrobatic trees.” One hundred thirty vibrant costumes representing 33,000 hours of work and lighting enhanced the performance.

Beginning with a his-and-her clown duo of Joanna Holden and Steven Bishop, a series of acts followed each other (in alphabetical order): Aerial Hoop in which Russian Leysan Gayazova displayed her strength and flexibility high above the stage and flying through the air on her hoop; in Aerial Straps Andrew and Kevin Atherton performed original acrobatic figures in a synchronized performance with a double strap; Body Skating featured 11 artists flying and “skating;” Anton Chelnokov twisted and dived on the net in the Flight of Icarus; a Georgian trio made up of Badri Esatia, Teimur Koridze and Khvicha Tetvadze moved with war-like rhythm; Irina Naumenko stretched and balanced gracefully on canes in Handbalancing on Canes; in Icarian Games the members of a “family,” led by the Rampin and Steven brothers, juggled and catapulted each other in a fast paced an entertaining throw back to ancient circus tradition; in Russian Swings 13 acrobats swung and jumped with amazing skill and style high above the stage; Helen Ball, Polina Mourtazova, Sophoe Oldfield, and Michele Ramos performed the Triple Trapeze with dexterity and finesse; and an adorable young Chinese trio made up of Chen Haiyan, Kuai Wenxiang and Zhang Yudong were the center piece of Water Meteors in which they whirled ropes with metal meteors attached to the ends. Two other performances of juggling and crutch acts were on vacation the day we attended the show.

The Tent The Grand Chapiteau is the name of spiral shaped air conditioned tent where the performances were held. It stod 66 feet high and was 167 feet in diameter. The four masts stood and 80 feet tall each, allowing it to accommodate more than 2,600 people. Inside the tent it felt comfortable, even intimate. We were surprised to discover we had shared it with 2,598 other people. Raising the tent requires a team of approximately 80 people. The entire site set-up included installation of a VIP area, merchandising and rehearsal tents, box office, administrative offices, a school and a fully equipped kitchen. Five generators provided 2,425 kilowatts of electricity to the Grand Chapiteau and infrastructure. Varekai traveled via 55 trucks carrying more than 1,000 tons of equipment for the tour.
Food And Beverages The concession stand selection of beverages was limited to sodas and purified water. The popcorn was yummy and crispy and there were hotdogs which we didn’t try. There was also Dulce de Leche Haagen Daz ice cream.
Souvenir Shop In the same circular tent of the food and beverage vendors there were souvenirs including Cirque du Soleil branded and colorful tops in sleeveless, short and long sleeve styles, circus theme figurines, masks, Cirque du Soleil CDs and DVDs. There was also a small area with art oriented items such as black and white nude prints (ranging from $900 to $4,000), elaborate masks (such as a feathers, gold findings and silk velvet Icarus one we spotted for $395), umbrellas, and jewelry.
Other Cirque du Soleil was established by Guy Laliberte in a small Canadian town near Quebec in the early 1980s. Born of a theater group founded by Gilles Ste-Croix, it has grown from 73 workers in 1984 to more than 3,000 including 800 artists in 2006. Since that time Cirque shows have made 250 stops in more than 100 cities around the world and more than 50 million spectators have seen a Cirque du Soleil show.

Cirque du Soleil dedicated one percent of their annual revenue to outreach programs targeting street youth in difficulties. Details were available on the Cirque du Soleil website at www.cirquedusoleil.com/CirqueDuSoleil/en/company/socialaction/default.htm 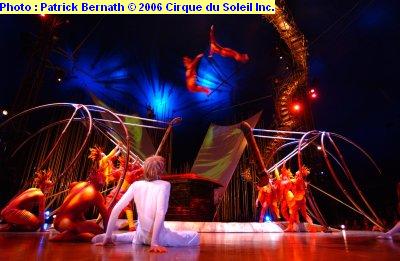 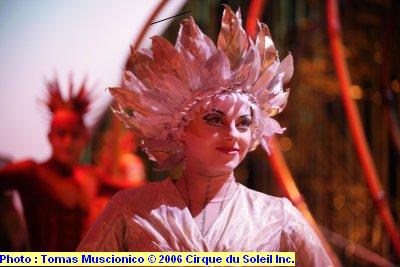 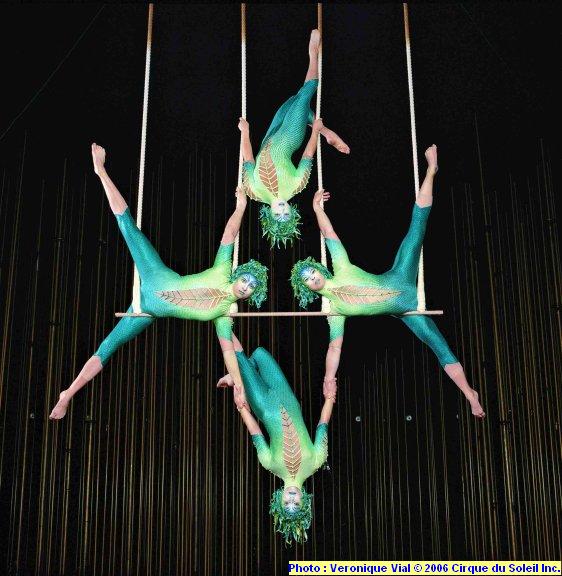