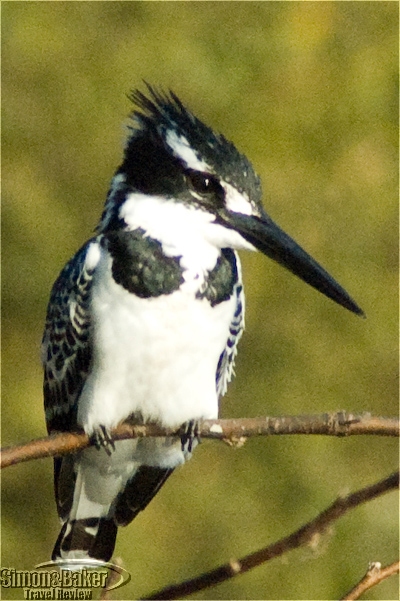 The superb vistas coupled with the classic luxury of the accommodations and service attentive to the smallest detail made Tongabezi the ideal starting point for my exploration of the Victoria Falls area.


Overall Impression While traveling through the game parks of Zambia, conversation often turned to favorite lodges and camps. Invariably, someone brought up Tongabezi. Those who had visited were enthusiastic; those who had not were wistful. Guides and management personnel spoke of “Tonga” with respect. When I arrived at Tongabezi, it was immediately clear how the lodge had come to be a standard by which Zambian luxury lodges and camps were measured. The instant the car pulled in front of the reception cottage, a choir of four staff members appeared to sing a joyous welcome. One of the chorists, Alvin, was introduced as my personal valet. As the only staff member allowed in my cottage, he was responsible for all my in-room needs. He escorted me through a meticulously tended grove of ebony trees overlooking a panoramic bend of the Zambezi River. The view was magnificent, the environment relaxed and utterly serene.

Alvin conducted a detailed introduction to the luxurious features of my cottage. He inquired about any special dietary requirements he might communicate to the chef; then with a reminder that he was only one phone call away, he left me to settle in. Meanwhile, he arranged a meeting with the activities advisor at a time of my choosing to review the array of options and plan my schedule for the duration of my visit. I opted for a relaxing stay, including such indulgences as a visit to Victoria Falls and the nearby crafts market, a sunset cruise and a massage in the privacy of my cottage. More intrepid temptations were available, such as whitewater rafting down the Zambezi rapids or bungee jumping from the famous Victoria Falls Bridge. Alvin was unfailingly on hand to escort me to each activity, as well as to the dining room.

Meals were another delightful treat, with menu offerings as refined and elegantly presented as I have experienced in fine restaurants of major cities around the world. The mighty Zambezi was an added attraction, shimmering under the midday sun or reflecting the rising moon across from my linen clad table. The superb vistas coupled with the classic luxury of the accommodations and service attentive to the smallest detail made Tongabezi the ideal starting point for my exploration of the Victoria Falls area.

Communications Intercom service connected my cottage to a central switchboard. The camp had cellular phone coverage compatible with a GSM 900/1800 international cell phone. A computer permanently connected to the Internet was located in the curio shop for the complimentary use of guests.

Power Tongabezi was on the electrical power grid and ran on 220 Volts/50 Hz electricity . A NW-135C adapter was necessary to use electrical outlets (the kind used in the U.K.).

Size Tongabezi occupied 26 acres (105,000 square meters) on the bank of the Zambezi River, with a 350 yard (300 meters) river frontage. The lodge could accommodate a maximum of 20 guests in its five chalets and four houses. It employed a staff of 80 including a guiding staff of 15.

Transportation There were several daily flights from Lusaka and Johannesburg to the Livingstone and Victoria Falls airports. From there road transfers were arranged by Tongabezi.

Year Open-Renovated Tongabezi opened with five chalets in 1990. It was one of the first lodges to welcome guests on the Zambian side of Victoria Falls. The Honeymoon House was added in 1991, followed by Tree House, Bird House, Dog House and finally Garden Cottage in the 1990’s. Since then, the lodge has been the object of meticulous on-going maintenance and periodic enhancements.

Common Areas The central lounge backed against a rocky ledge. Under a tidy thatch roof, it included a bar and dinning room, and a large seating area with concrete benches constructed around a large stone fire place. The benches were upholstered in black canvas with accent pillows in earth-toned local weavings. The white-plastered walls were decorated with ethnic wood carvings. The bar and lounge opened onto a large terrace with additional seating in wooden sofas with rust-colored cushions, and a circle of wooden chairs arranged around an open air fire pit. The terrace extended onto a large deck overlooking the river and the dock. All meals could be served on the deck or dock as well as in the dining room, at the guests’ option.
Bathroom The 125 square foot (12 square meter) bathroom was entirely built of stone and concrete. A large circular shower and five foot long sunken bathtub were open to the sky: while a double-sink vanity and wrought iron rack holding pristine white bath towels were under thatch, as was the separate water closet with its flush toilet.

Room My cottage, the Garden Cottage, was 600 feet from the main lodge. It was a 500 square foot (46 square meter) private suite under thatch, built around a 500 square foot central garden and enclosed by high stone walls. It included a 300 square foot (28 square meter) master bedroom with adjoining bath. A small bedroom with built-in twin beds was located behind the bathroom, with its own access to the garden, making this cottage ideal for families. The master bedroom featured a king-size bed with down pillows and duvet. The bed was swathed in mosquito netting and framed by built-in stone bedside tables with reading lamps. A wall mirror hung above a vanity table that doubled as a writing desk. A large armoire completed the décor. The room was open on two sides to the garden.

On the opposite site of the garden was a 125 square foot living area. A rectangular dining table and four chairs were located in front of a stone fireplace. A six foot curved bench padded with rust-colored canvas and piles of earth-toned pillows occupied the back wall. A tall native drum stood by the side of the fireplace. Black wrought iron cut-outs of animals hung on the white plastered walls. The room was open on two sides to the garden where two lounging beds with tan padding offered a quiet haven to read or nap in the sunshine.

Food The lodge was blessed with an inspired young chef, Zuwi Nawa, of the local Lozi-Tonga tribe. He was a mainly self-taught prodigy who was raising the standards of Southern African nouvelle cuisine. His menus included such imaginative creations as corn and Gorgonzola fritters, a wonderful mesclun salad with shaved coconut and ginger julienne, exquisite baby vegetables grilled to perfection (the mesclun and vegetable were organically grown in Tongabezi’s own gardens), and a tart, palate-cleansing mango granita. That was merely the lunch menu on the first day of my visit! Another of my favorites was his wild-mushroom risotto, one of the best I have tasted outside of Italy.
Amenities Tongabezi amenities included daily complimentary laundry service, a wall safe, bottled water, and room and body insect repellent spray. The room was serviced twice a day. Bathroom supplies included thick white terrycloth bathrobes, soap, shampoo, shower gel and body cream in dispensers. All meals and drinks were included, as were a number of activities near the property such as sunset and sunrise boat cruises, fishing, canoeing and bird walks. A walking tour of the Zambian side of Victoria Falls, visits to various Livingstone markets and game drives in the Mosi-Oa-Tunya National Park were also included.

Facilities The reception area was located in its own stone and thatch house at the entrance to the property, a few steps up from the main lounge. It was separated by a small foyer from a curio shop that offered a limited array of local textiles, small wood carving and ethnic jewelry. It also carried a few basic travel necessities such as sunscreen and toothpaste.

Swimming Pool The pool was 20 feet by 32 feet (six by ten meters) big with depths ranging from four to eight feet (one to two meters). It was carved out of a rocky ledge, and shaded by a mature ebony tree alive with birds and vervet monkeys. There was a stack of towels on a tray by the pool. Padded lounge chairs were lined up on the adjoining deck overlooking the river.

Game Viewing Tongabezi was not a game lodge but hippos, crocodiles and the occasional elephant could be seen around the river. Vervet monkeys were omnipresent in the gardens and bird viewing near the lodge was excellent. It was easy for guests to arrange game drives in the Mosi-Oa-Tunya National Park, the smallest of all the Zambian national park located a few miles down river. I visited the park and found it disappointing. In recent years, the main attraction of Mosi-Oa-Tunya had been the opportunity to view a vaunted pair of white rhinos residing in the park. Tragically, one of the great beasts had been poached a few days before my visit. I hoped to see the one remaining rhino, but the game wardens told my guide that the rhino had been wounded during the poaching incident and was kept at an undisclosed location. I did get to add Masai giraffe, the largest of all the giraffe subspecies, and wildebeest to my game sighting list.
Activities Tongabezi’s activities advisor Quentino Mbingi arranged guest activities upon their arrival. In addition to the options included in the rate, a number of activities and excursions could be booked at additional cost. These ranged from extreme sports around the falls or day trips nearby Bostwana and Zimbabwe parks, to an array of massage treatments by the skilled resident licensed masseuse Rhoda Musamvu. I especially enjoyed her invigorating massage in the morning sunshine my cottage’s garden.

Tongabezi also held the concession for Livingstone Island located at the head of the Victoria Falls making it possible for guests to enjoy a boat ride to the island, lunch overlooking the edge of the chasm, and even a dip in the natural bathing pool that forms each year in the rocks along the edge of the falls.

Other Children seven and older were welcome

Tujatane, a Tongabezi Trust School, was established and managed by Vanessa Parker. Originally opened in 1996 as a pre-school for 15 children of the staff, the school developed into a full primary school. At the time of my visit it provided education and teaching materials for 116 children of the Tongabezi staff and the local community. Tujatane pupils were recognized by the state education authorities as achieving outstanding academic results.

Service With a ratio of four attentive and friendly staff per guest, it was easy to feel pampered at Tongabezi. But my personal valet, the thoughtful and ever-vigilant Alvin Malambo, a young Tonga tribesman from the Lake Kariba area, brought service to a whole new level of excellence. In a part of the world where “in a moment” is a flexible concept, Alvin had the punctuality of a Swiss clock. He also anticipated my return from afternoon excursions, and welcomed me with a foam bath already drawn, at my favorite bath temperature! 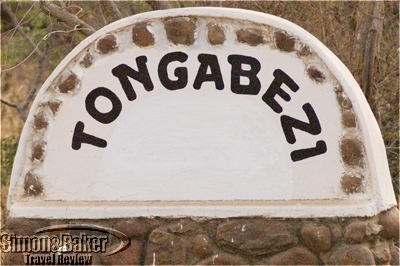 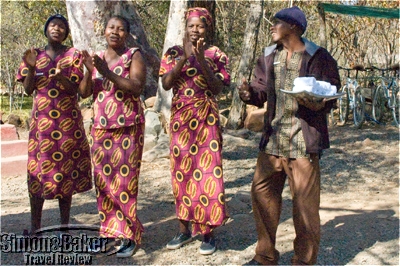 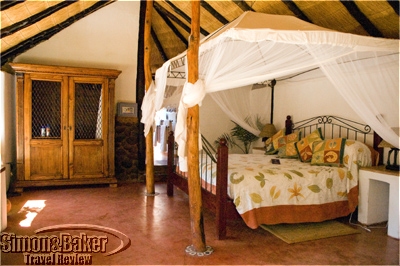 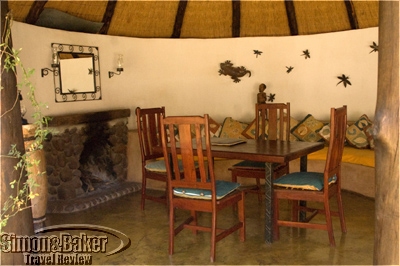 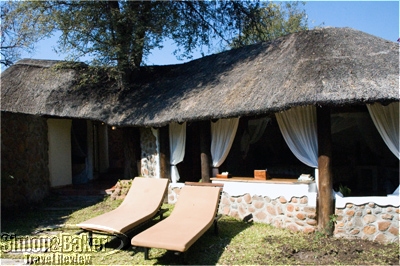 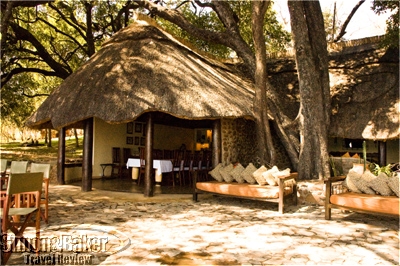 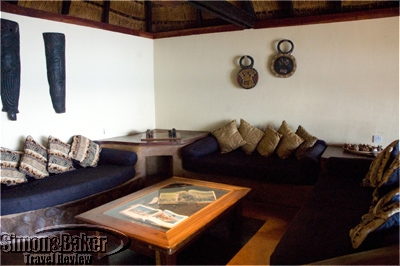 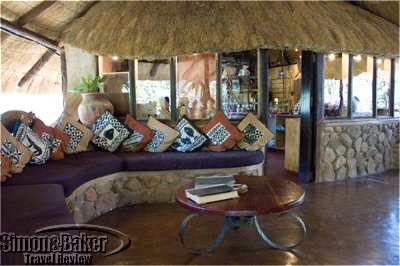 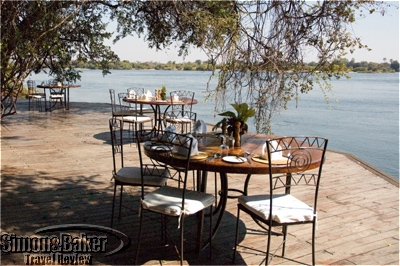 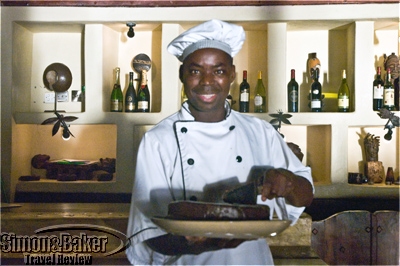 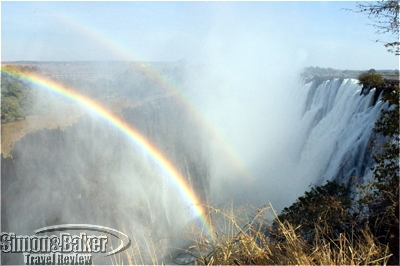