Tobago in the Republic of Trinidad and Tobago 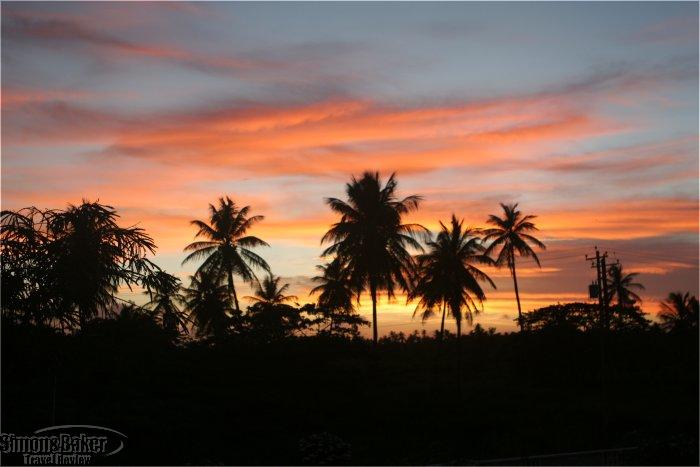 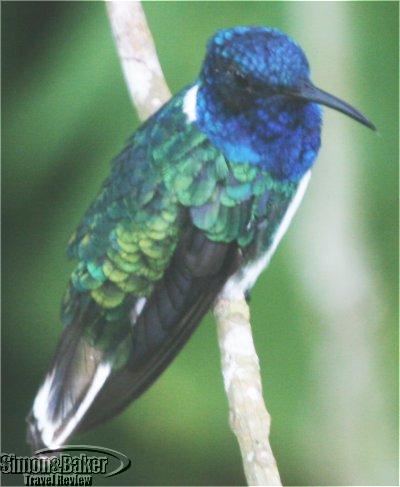 In short, Tobago offered good food, a pleasant ambiance, unspoiled natural attractions and a certain, difficult to qualify, attraction that made us long to return.


Overall Impression Named Tovaco, meaning tobacco, by the original Amerindian inhabitants, Tobago is a tropical Caribbean island just below the hurricane belt. Described in tourism brochures as “clean, green and serene,” it is an attractive destination for ecoutourists and adventurous world travelers able to appreciate its many charms hidden just below the surface. It was formerly a British colony and retains many of the British traditions such as left side driving, a charming West Indian English, and a sense of punctuality. At 21 miles by 7 miles (41 x 14 kilometers) in size it is slightly smaller than the state of Delaware in the U.S.

When we visited last the majority of the tourism on the island originated in Europe. The United Kingdom and Germany were the most common countries of origin for visitors. At that time it was one of the more prosperous islands in the region with income from petroleum and a developing tourism industry. Although 40 percent of Tobago’s income was generated by tourism, overall tourism only represented 2 percent of the nation’s income. This has kept the island somewhat free of mass market travelers and able to grow its tourism industry at its own pace, a luxury few independent Caribbean islands can afford.

In addition to its breathtaking vistas and natural charms, especially the tropical rain forest described as the oldest protected forest reserve in the Western Hemisphere, we particularly liked the island’s easy going, efficient, and modest atmosphere rooted in African Caribbean customs and lifestyles. Though serious initially, Tobagonians could break into an engaging smile with ease.

Tobago has a tradition of self sufficiency. When we visited the island produced many of its foodstuffs including agricultural products, seafood, and livestock. Perhaps this abundance is part of the reason we found tasty affordable food everywhere we went on the island. During out stay we enjoyed well prepared seafood as well as varied savory, and sometimes spicy, local dishes like crab and dumplings, conch and dumplings and roti. In short, Tobago offered good food, a pleasant ambiance, unspoiled natural attractions and a certain, difficult to qualify, attraction that made us long to return.

Health And Vaccinations Although there was dengue fever when we visited we suffered from no illnesses and no vaccinations were required to enter.

How To Get There When we traveled, the only flights from South Florida in the U.S. were via Trinidad. This required us to clear customs in Trinidad, collect our luggage and board a second smaller plane to Tobago. Other U.S. carriers offering service to Tobago included Continental and American. European carriers to Trinidad and Tobago included Condor (Germany), Lauda Air (Austria) and Martin Air (Holland), British Airway and Virgin Atlantic.

Location Tobago, part of the island nation of Trinidad and Tobago, is just north of Venezuela and the Equator. It lies northeast of Trinidad, its larger and wealthier sister island.

Money Issues We exchanged currency at the airport in Trinidad on arrival and departure. We also withdrew funds from automated teller machines (ATMs) and paid with credit cards while we were there.

Technology There were GSM mobile phones readily accessible and affordable, even for international calls. We saw signs for Internet cafes and there was dial-up access to the Internet from our rental villa.

Transportation Getting around Tobago required a rental car, advance planning and patience. Our initial booking was slightly problematic. When we arrived, the small company owner requested we pay for the entire week in cash on the spot. Since it was past banking hours we prevailed on him to wait. Eventually we switched to another company willing to accept credit cards. Driving was on the left.

Tobagonians, though skilled drivers, stopped everywhere and anywhere along the island’s pot hole filled two lane roads. Gravel in urban areas and hilly roads on the eastern end of the island did little to dampen local driver’s need for speed.

Shopping And Souvenirs There were locally crafted products such as hand painted t-shirts, handmade jewelry and masks, pareos and batik fabrics.

Tourism Highlights The Tobago rain forest was perhaps most notable among the island’s attractions. Although it was home to diverse wildlife, there were no predators and no poisonous snakes. More than 200 species of bird, 123 butterfly species and 12 types of mammals call Tobago home. There were many dive sites, two PGA (Professional Golf Association) rated golf courses and countless good restaurants.

Amateur and experienced scuba divers could observe some of the 300 species of hard coral, sponges and other aquatic life that thrive thanks to the nutrient rich waters fed by the nearby Orinoco River. There were many dive operators and dive sites, particularly in Speyside, and there was a decompression chamber. We enjoyed our dive experience immensely. Although visibility was low due to the flow of water from Venezuela’s Orinoco River, the reef we visited just off the west coast of Tobago was beautiful and teeming with colorful fish and coral.

The southern part of the island facing the Atlantic waters and wind had the choppier more dramatic ocean fronts. The northern or leeward coast was calmer and home to some of the popular beaches including the often photographed Pigeon Point beach.

Other We noticed many crime prevention strategies on the part of the locals and were told this was due to a rise in violent crime. This made us more watchful than we would have liked, especially in such a small island. During our weeklong stay it rained everyday at least once a day sometimes more frequently. The rain showers were usually brief and the sun often returned soon afterward.

Tourism information was available at the airport in Tobago and via the government’s official website at www.visittobago.gov.tt

Dive instructor Randy at the Manta Dive Center near Pigeon Point was noticeably patient and helpful during our morning long resort dive. All the staff we met at the shop were friendly. www.MantaDive.com + 868 639-9969 or + 868 639-9209 Email: info@mantadive.com

C’Things Beach Shop, across from Manta Divers, was a convenient place to shop for souvenirs after a diving excursion. The proprietress had an engaging and welcoming manner making us feel welcome instantly. She had stamps and a mailbox so we were able to send some postcards. + 868 639-0072 Email c_things@yahoo.com

For casual fare we loved the Store Bay food stalls. There we found local specialties like crab and dumpling, conch and dumpling and our favorite chicken curry or beef stew roti , a hearty wrap around a juicy dish with just enough spicy flavorings to make it fun. The stalls were small but impeccably clean; the food was tasty and the prices reasonable. Near the stalls there was a shaded area where we sat and enjoyed lunch if there was space or we took our food home for a more leisurely meal.

When we visited Speyside on the eastern tip of Tobago we had lunch at Jemma’s Tree House Restaurant on the Main Road in Speyside 0. We particularly remember the steamed spiny lobster with garlic butter, grilled kingfish with onion sauce, breadfruit pie, and tania root fried fritters. The well known beachfront eatery was full to bursting so reservations might be a good idea before heading on the long cross island drive. + 839 660-4066 and Fax + 839 660-605 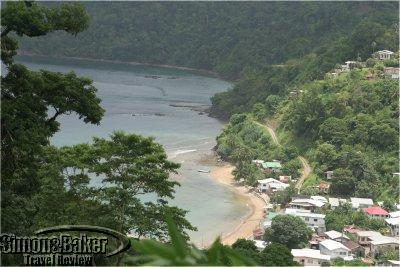 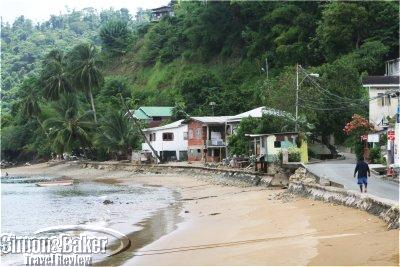 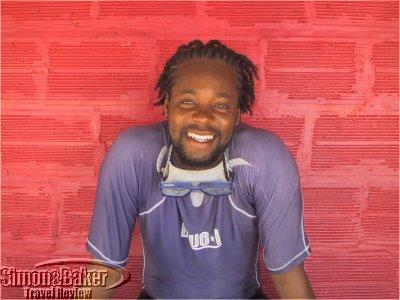 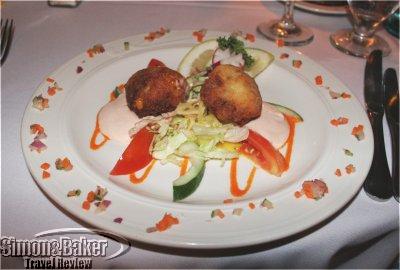 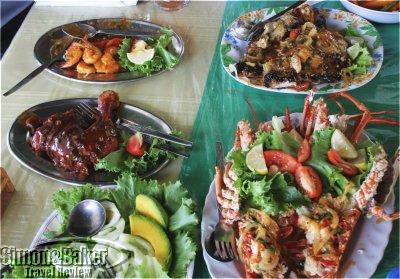 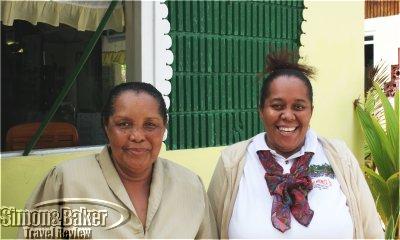 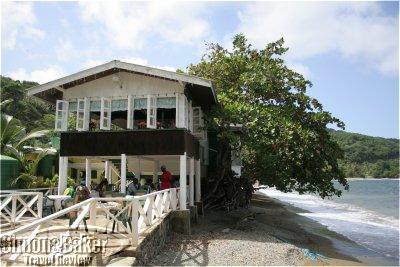 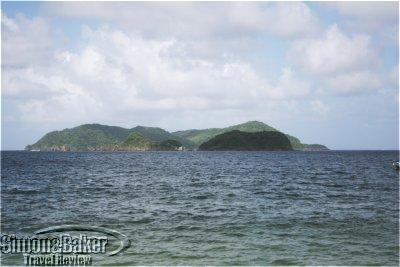 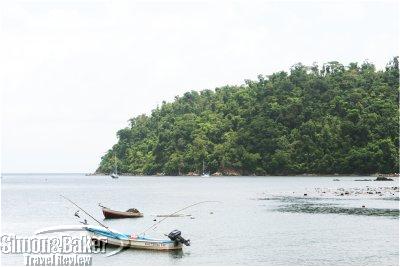 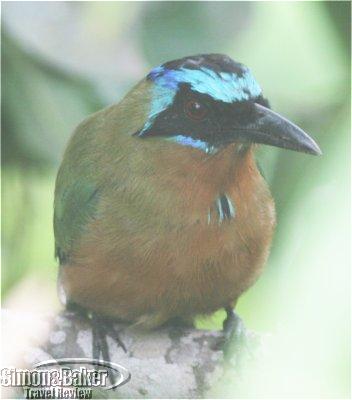 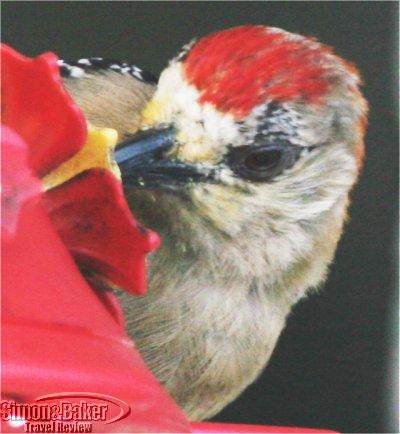 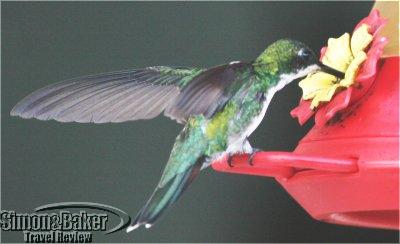