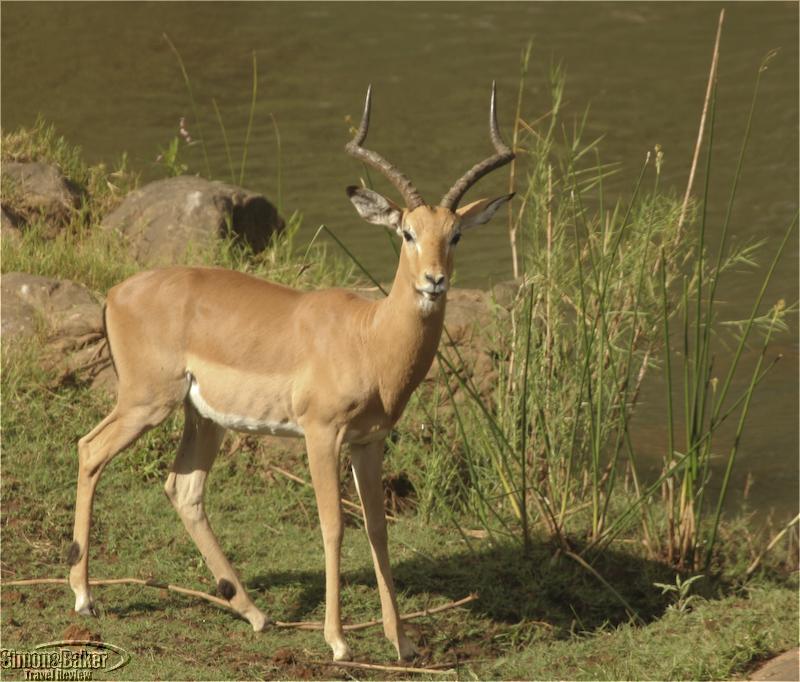 Now that the property is under new management I hope its future is safeguarded at least for some time to come.


Overall Impression As we approached The Outpost I wondered how the property was faring since we first visited the area in 2004, especially now that it was under new management. From my first visit I became convinced The Outpost was a special place worth a detour, even a special trip. I hoped nothing had happened in the past four years to change that.

I needn’t have concerned myself. The Outpost remained as magical as I remembered even more so thanks to the kind ministrations of the new property managers, Alex and Kevin Johnston. Once again we fell in love with the property. It had many attractive features including a remote location within the Kruger National Park, a hillside setting, soothing ambiance, attractive suites, friendly staff and stunning views. There were also improvements in the management, meals, and game viewing since our first visit. What a wonderful place to honeymoon or simply get away, relax, or meditate and enjoy some pleasant game viewing.

What made it so special is hard to put into words. The Outpost was the pretty suite with sweeping views of the bush below, the open setting built on the hillside, the serenity and sounds of the bush, and the privacy and exclusivity of the lodge away from the rest of the country in the northern tip of South Africa’s most famous national park. It was the opportunity to experience solitary game drives seldom encountering other vehicles; to visit corners of Kruger most travelers never even know about and catch a glimpse of animals infrequently seen or inexistent in other areas of the park.

One of the most noteworthy aspects of The Outpost was our suite. It had a remarkable 270-degree vista of the bush and Limpopo and Luvuvhu rivers in the Kruger National Park. It was a partially enclosed space with a roof and walls on only two sides. This emphasized the view outside while providing creature comforts inside.

Our three-day visit sped by too quickly and once again I long to return to The Outpost where I could easily spend a week. Now that the property is under new management I hope its future is safeguarded at least for some time to come.

Internet Connectivity There was little to no Internet, telephone or cell phone access on site. Phone calls had to be made at the property office. We succeeded in connecting to the Internet using our mobile phone if we positioned it just so in the open area of our suite. The signal was intermittent and dropped often.

Lodge Managers Alex and Kevin Johnston managed the property. They had worked in the safari industry in Botswana and South Africa for eight and 16 years respectively.

Owned Although The Outpost is owned by the Makuleke people, John Legh and Andy Leigh own the concession. They are charged with managing the property until the tribe is equipped to run it independently.

Size There were 12 suites in the 4,300 square meter property. There were 21 staff members including 18 members of the Makuleke Tribe. The Outpost is located within a 27,000 hectare park area which they share with two other facilities.

Year Opened-Renovated The property was originally built in 2002 and the most recent renovation was in October 2007.

Lobby And Common Areas The lodge was designed with contemporary African décor including custom features. The style emphasized the beauty of the surrounding bush area and views while providing a comfortable and understated 21 st century environment to promote an enjoyment of the scenery and relaxation. Italian architect Enrico Daffonchio was the lead designer. His ideas were supported and supplemented by input from the original and new property owners. Highlights included simple, clean lines and the combination of unconventional elements like steel and canvas for a luxurious yet unassuming look. In the reception area modern bathrooms were separated from the main room by a glass partition. Distinctive touches in the common area included Nguni cowhides on the ottomans, colorful pillows, and walls built with local stones.
Bathroom The bathroom section of the suite was comprised of an open shower; open concrete egg shaped bathtub, his and hers sinks and a separate water closet. There was a canvas “wall” between our bathroom and the nearest suite, allowing us to use the facilities and enjoy the view in privacy. A divider for the area between the room and the bathroom was available for those craving additional privacy. We chose to leave the divider closed and enjoy the feeling of openness and communion with nature. Seeing the rivers and landscape while showering or bathing was truly luxurious and relaxing.
Suite Our suite, Room 12, was the last room at the end of the wide walkway located about 500 meters from the property’s main area. Our 55 m2 (550 square feet) suite faced the wilderness of Kruger National Park. The view from the room formed a 270 degree arch encompassing the area from the south of the lodge to the east and north. Our temporary space offered one of the most memorable room designs and views we have enjoyed anywhere.

Furniture included a Kiaat (African) wood desk/table with legs in the shape of “tusks” and two metal and black chairs; a king size bed with feather pillows and a warm duvet (much needed during the windy and chilly winter nights) with a small wood night table and lamp on each side; a comfortable light blue faux suede divan with a wood end table on each side; and a navy blue and white cloth double lounge chair facing the south side of the room. There was a sliding closet to one side where we placed our luggage. A cloth laundry bag clean, towels and toiletries were stored there. When open, it served as a divider between the sleeping and restroom areas.

Although it took a few extra minutes to reach our suite from the main area, the walk was worthwhile; our recompense was the fabulous view and seclusion (we had only one neighbor). Those suffering from fatigue or unwilling to walk that far to their rooms several times a day, requested rooms near the main building.

Since our last visit, custom made floor to ceiling shades were added to protect the space from the elements and enhance guest privacy. These were made by a South African company from a specialty French fabric.

Meals Meals were served when all the guests were seated, usually in the bush facing main dining area or in the nearby open terrace by the pool and under the stars. One night the staff surprised us with a cozy fireside meal in an inner courtyard. Breakfast, immediately following our morning drive, was a combination of buffet and individually served hot plates. Lunch, a light affair, and dinner served after the evening game drive, were plated. All the meals we had without exception were delicious and well served.

For coffee lovers there was an Italian espresso maker stocked with a local coffee brand. The cook when we visited the property was Pegy Hlunguani.

Amenities In the bathroom there was Rooibos shampoo, conditioner and body gel in full size refillable containers, and bath robes. We were also offered moist hand towels on our arrival from the dawn and dusk game drives.

Pool There was a small outdoor (3 meters by 12 meters and 1.5 meters deep) swimming pool though it was much too cold for any of us to take advantage of it during our off season visit.

Game Viewing The Outpost had a resident full time ranger and cultural historian with four years of experience and rifle handling training. When she was on leave, Kevin accompanied guests on the game drives and, if necessary, additional staff were brought in as needed. Our game viewing vehicle had a canvas roof and was open on the sides.

Sightings that stand out in my memory include an extended viewing of lionesses walking in the moonlight ahead of our vehicle, lesser and thick tailed bushbabies in one sighting next to each other and a gorgeous moonrise at the famous Crooks’ Corner with crocodiles to enhance the scene. We particularly enjoyed stops at Crook’s corner and Lanner gorge during the game drives.

Our game viewing drives were especially enjoyable. Although game viewing was limited to roads our guides were excellent spotters and we thoroughly enjoyed our drives. Gordon and later Kevin were excellent spotters and affable companions who shared their joy of the bush and some of its many wonders with us. At my request, Kevin and I went on a pleasant 90-minute bush walk along the banks of the river.

Activities There were morning and evening game drives and bush walks on request. In between drives it was possible to lounge poolside and request an in suite massages.
Other The location of the property meant it was necessary to drive a long way or fly to reach The Outpost. The reward, the mostly European clientele discovered, was the relative seclusion of the property that shared the area with a training facility and another ecotourism property.

Eventually The Outpost will revert to the Makuleke People, the original inhabitants of the area. Most of the lodge staff were tribe members being trained to manage and run the hotel in the future. The Outpost was the first lodge built in the Makulele Region as a result of a ground-breaking agreement between the Makuleke People and the South African National Parks Board. The Makuleke Region fell outside the borders of Kruger National Park until 1969 when they were forcibly removed under the Apartheid laws of the day to allow the Park to extend to the borders of Mozambique and Zimbabwe. In the 1990’s, a Makuleke instituted land claim culminated in an agreement that returned the lands to them provided it remains part of the Park and is used only for limited ecotourism.

Children 10 and older were welcome. Families who booked the entire property privately were welcome to bring children younger than 10. The Outpost ran on generator power. The property had an eco friendly sewage system and staff recycled bottles, glass and paper products.

Some of the staff had received abbreviated massage training. I took advantage of their new found skill one early afternoon after a bushwalk with Kevin. Charmaine Chauke, assistant manager and Margaret Deka, head of housekeeping, were both available for massages. Margaret was kind enough provide a relaxing full body in suite massage. 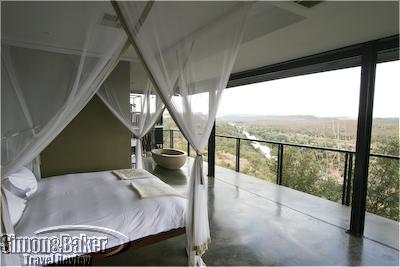 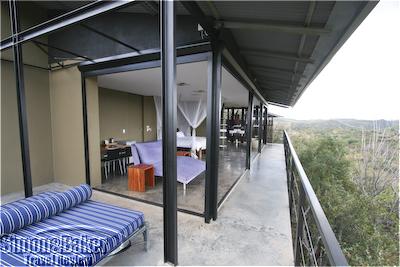 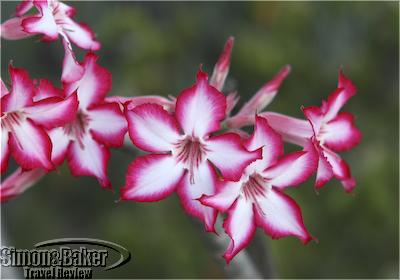 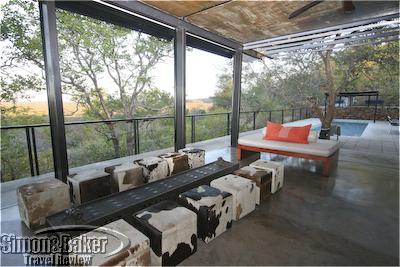 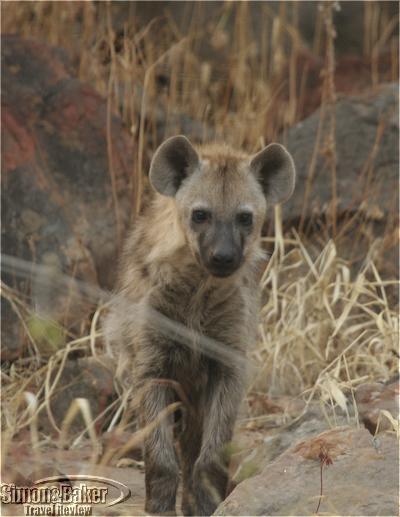 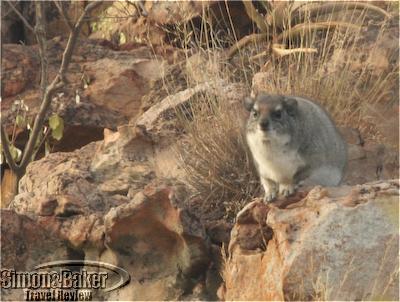 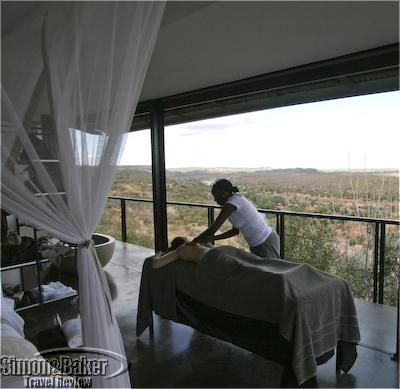 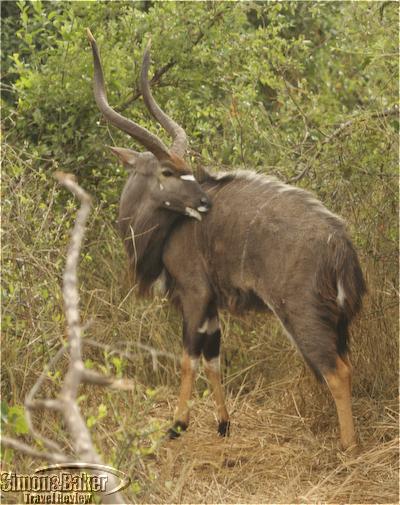 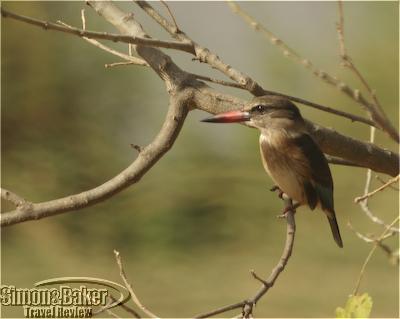 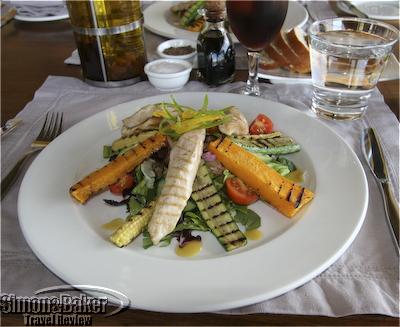 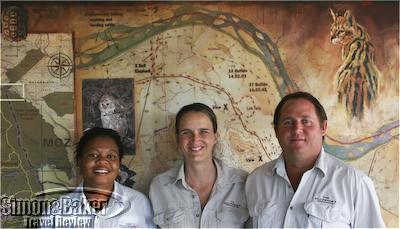 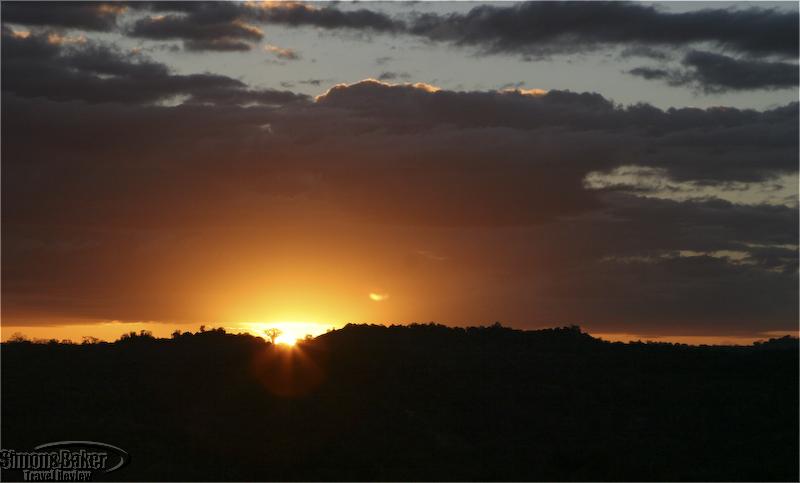