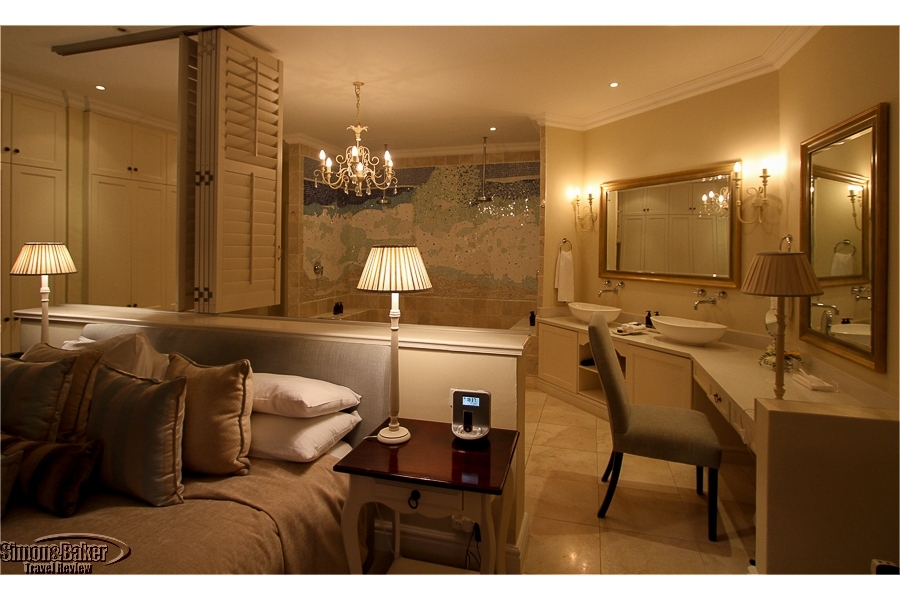 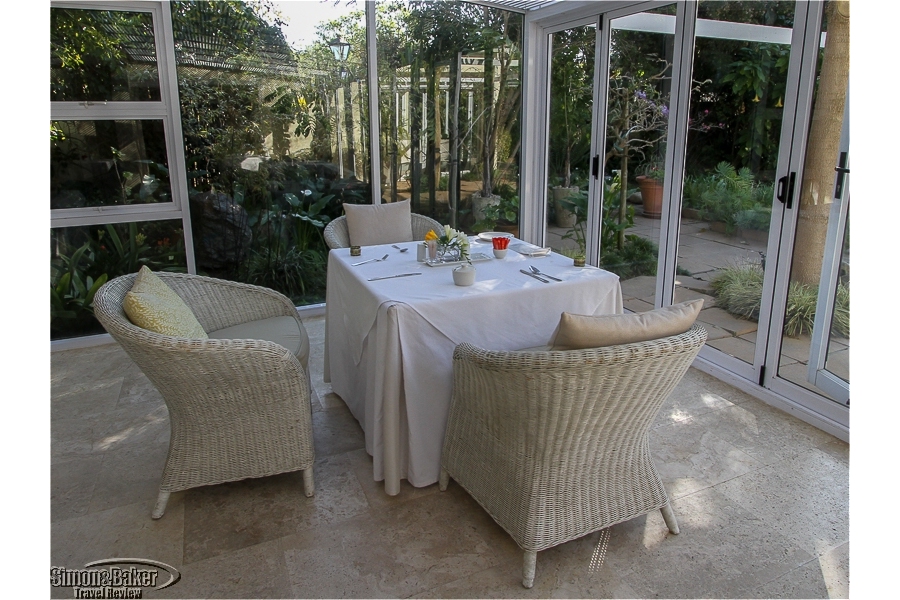 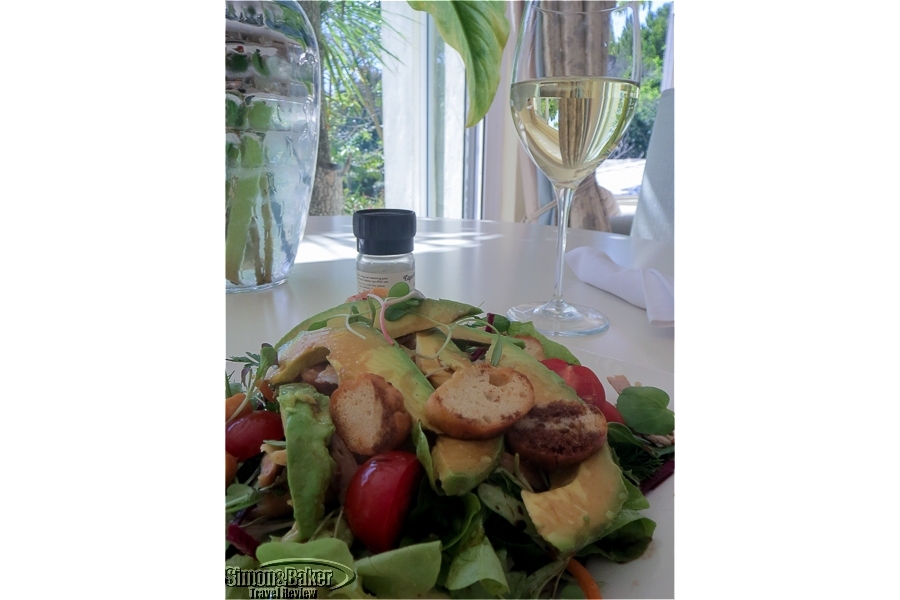 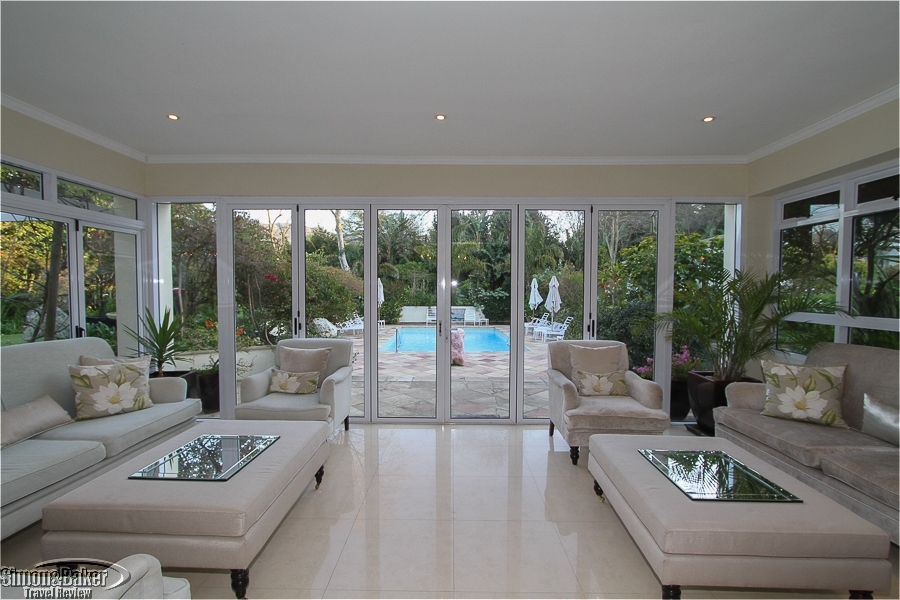 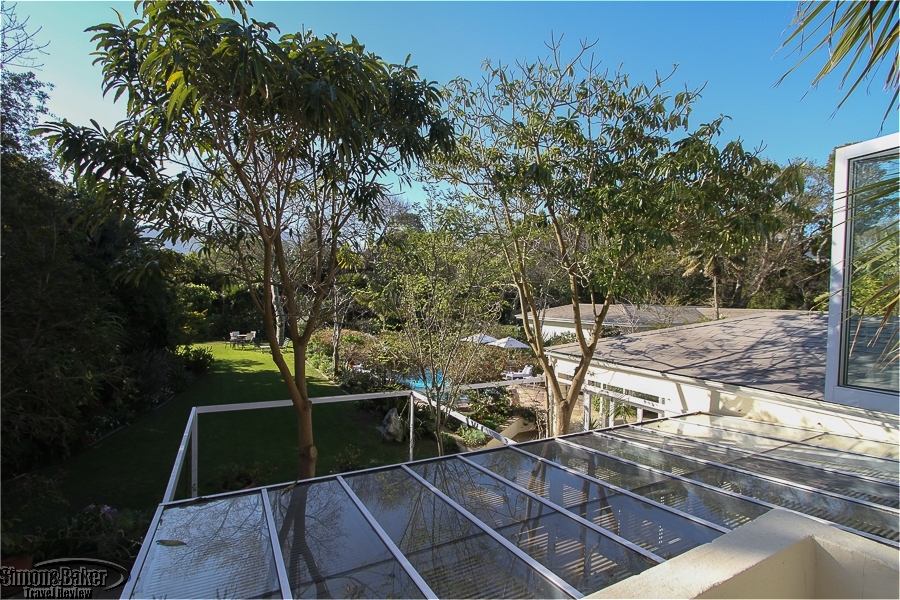 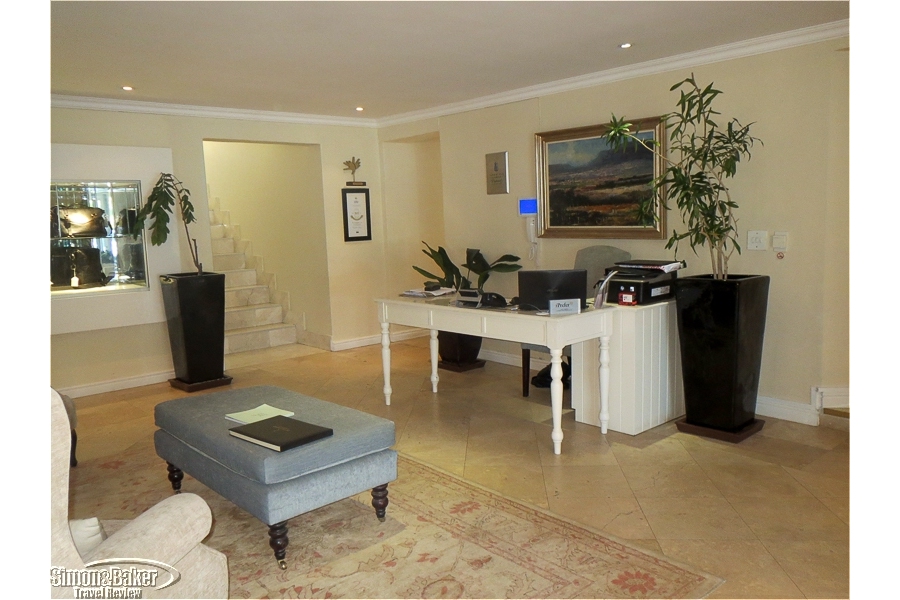 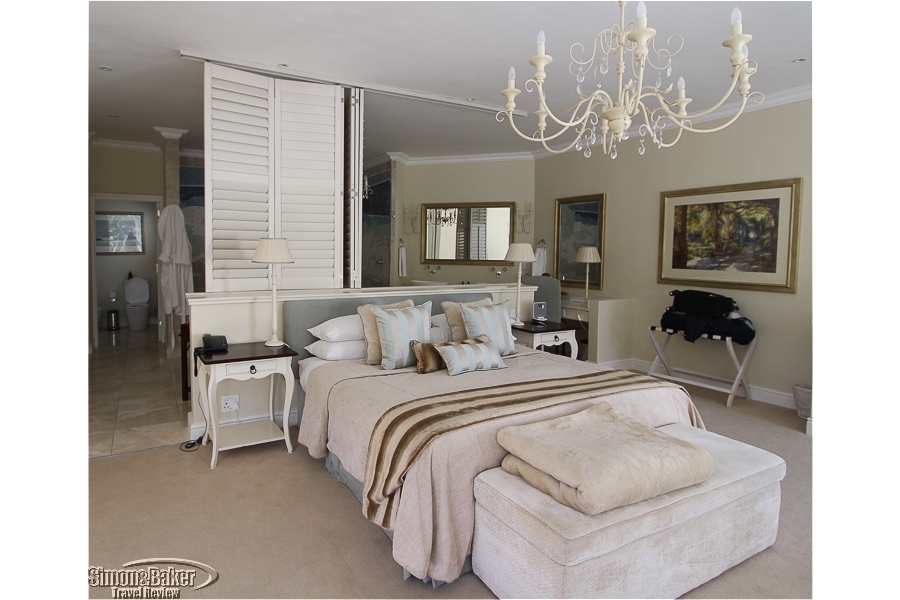 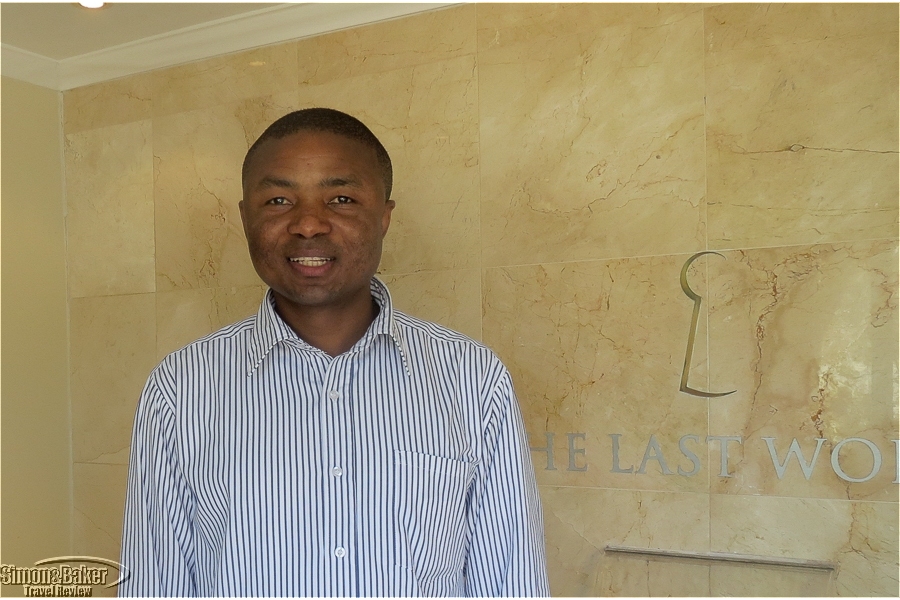 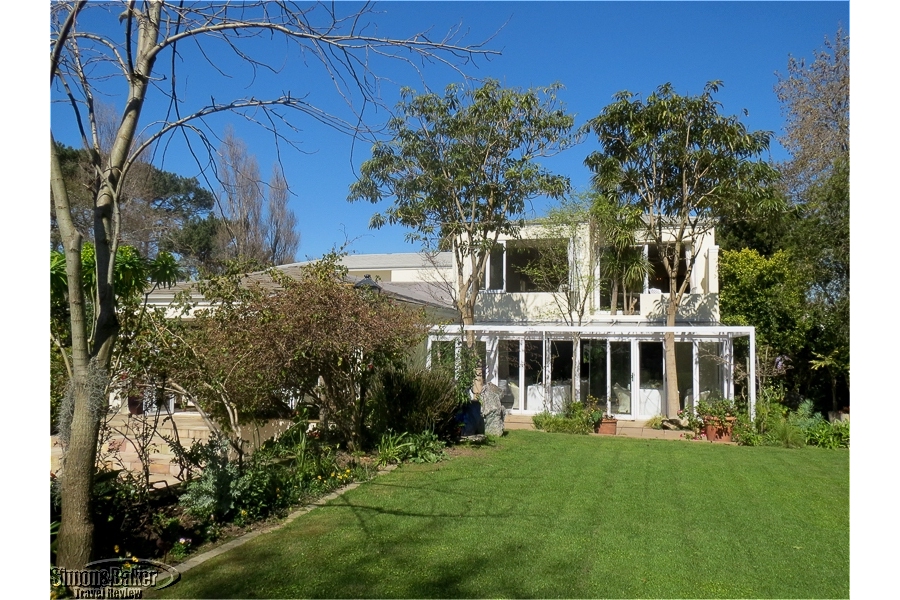 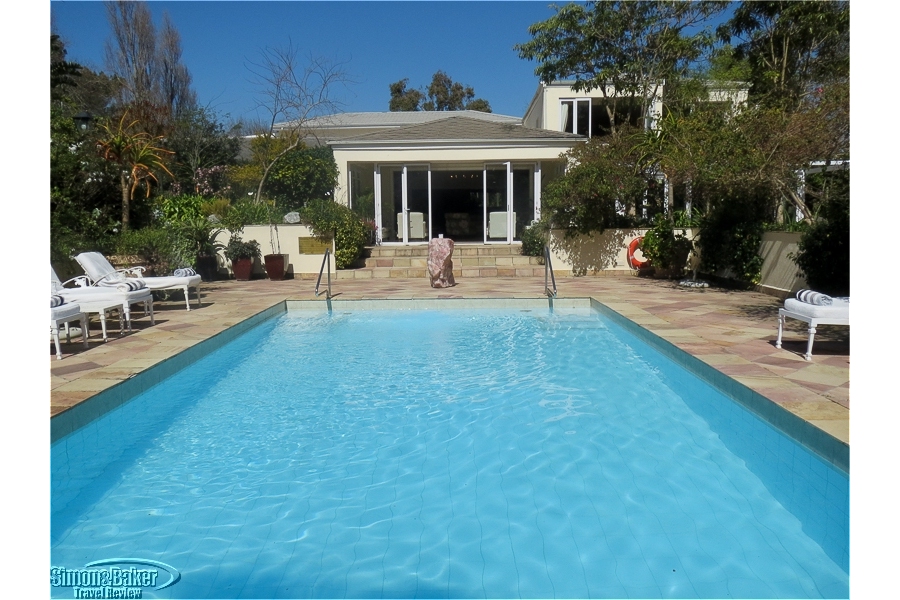 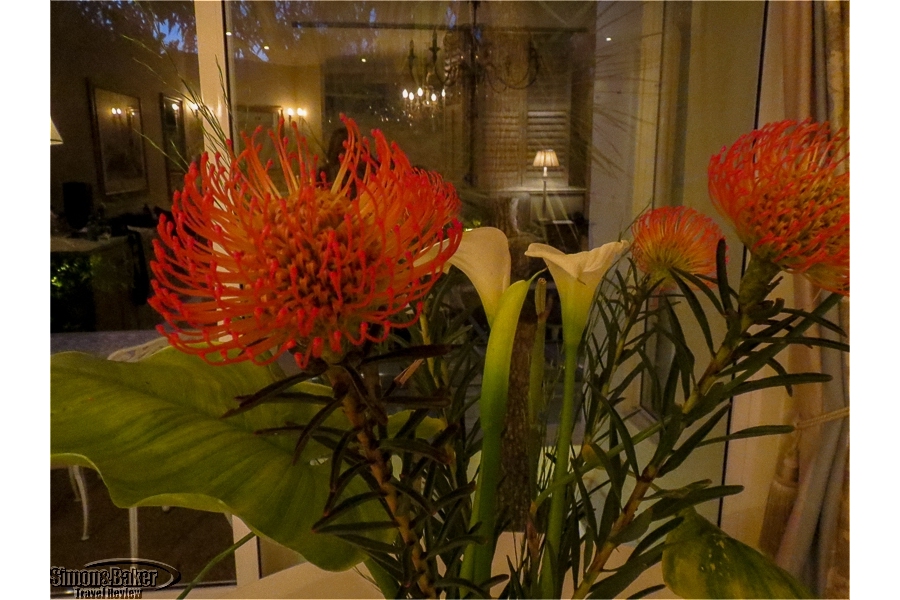 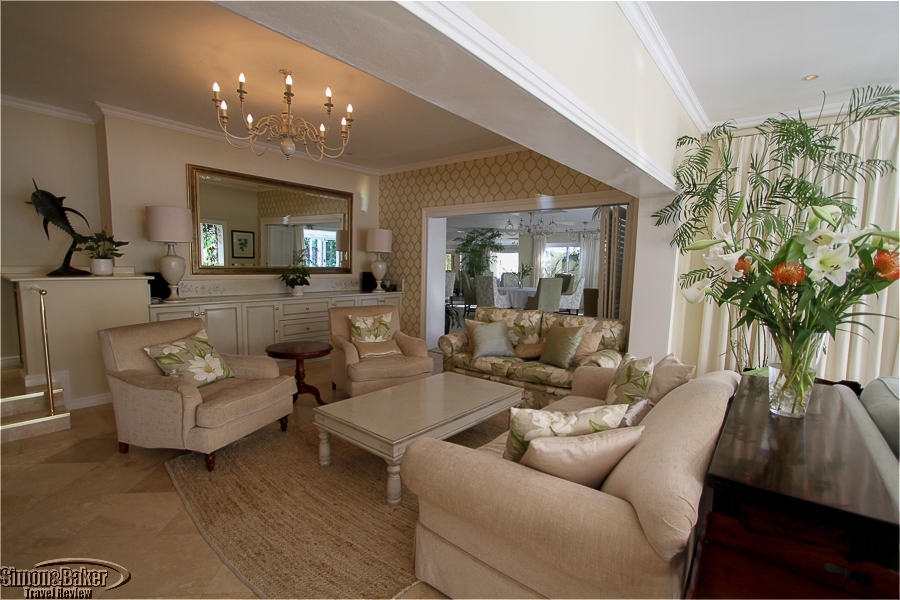 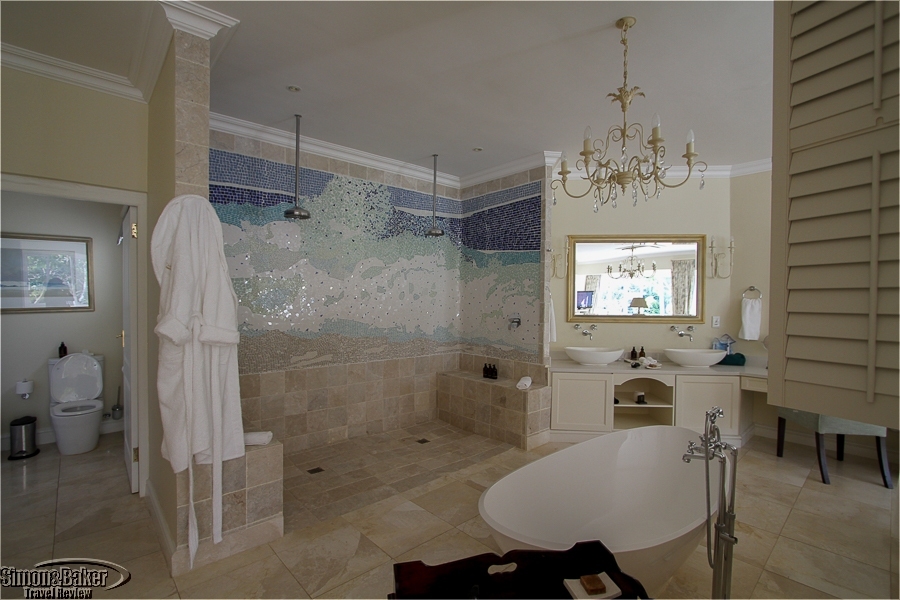 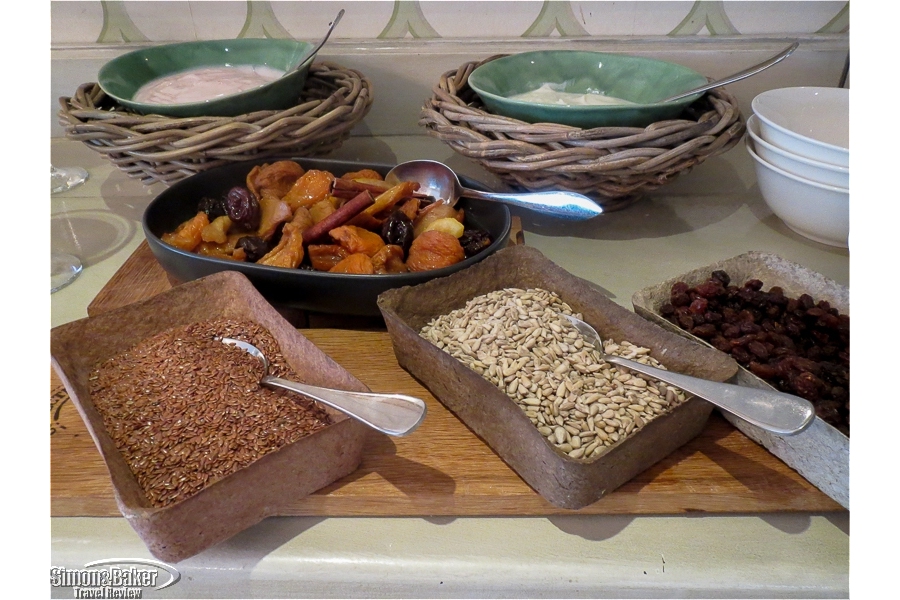 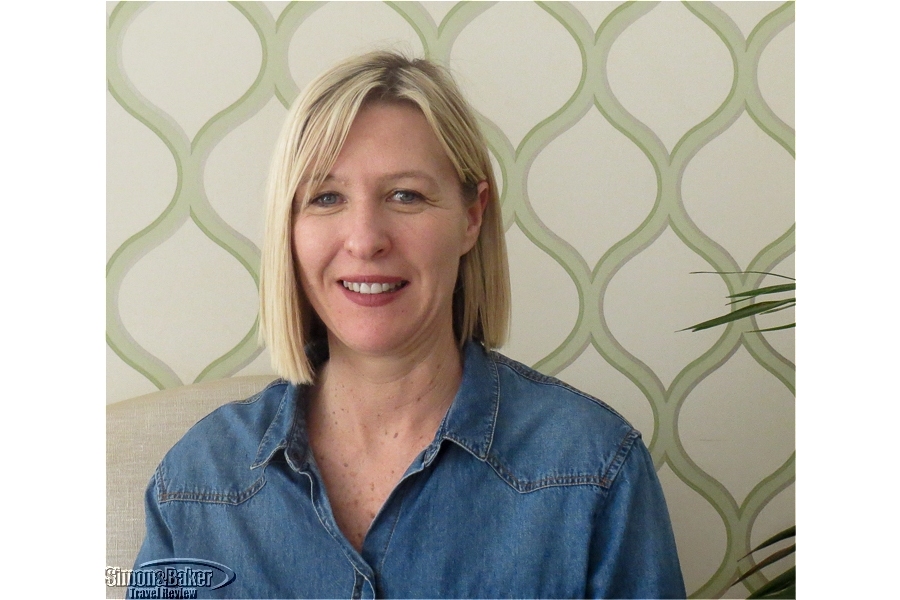 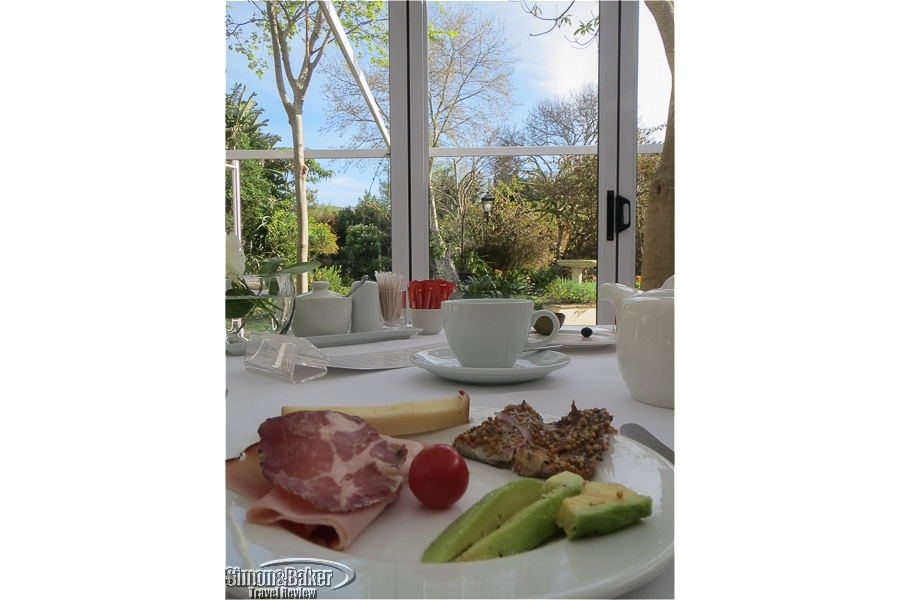 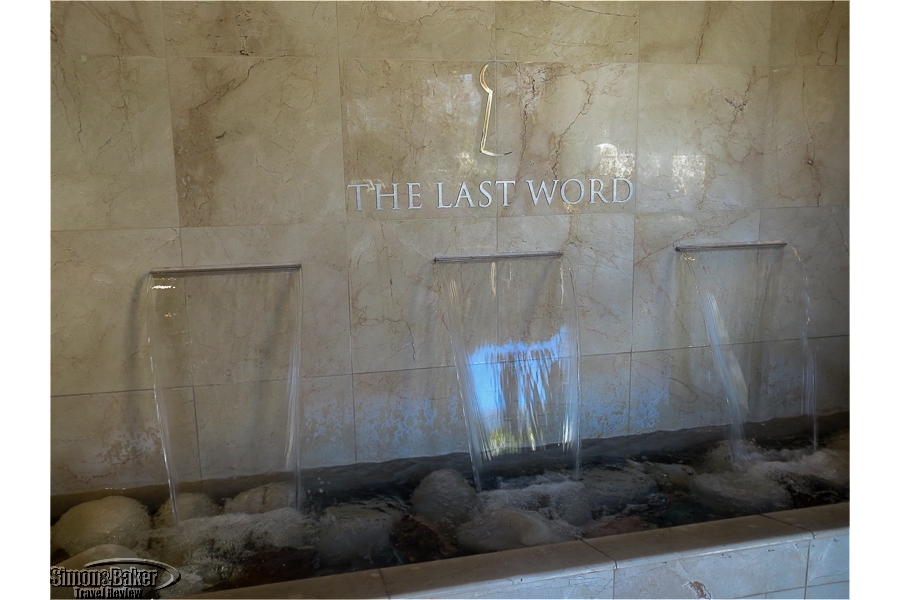 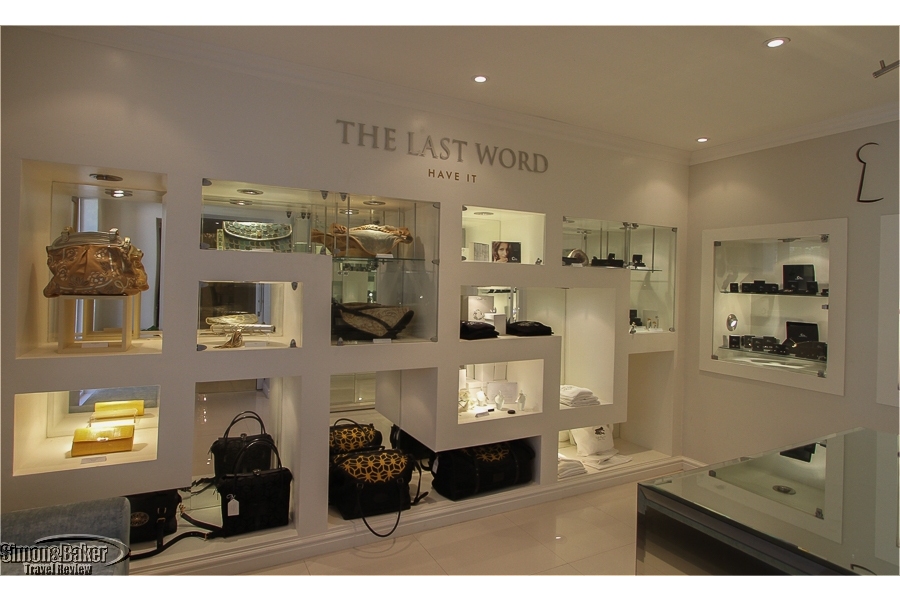 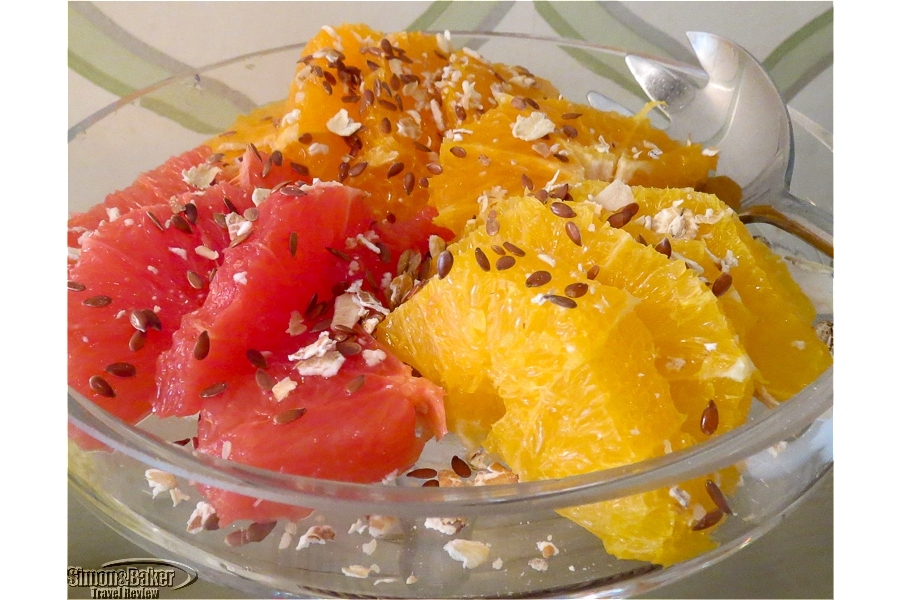 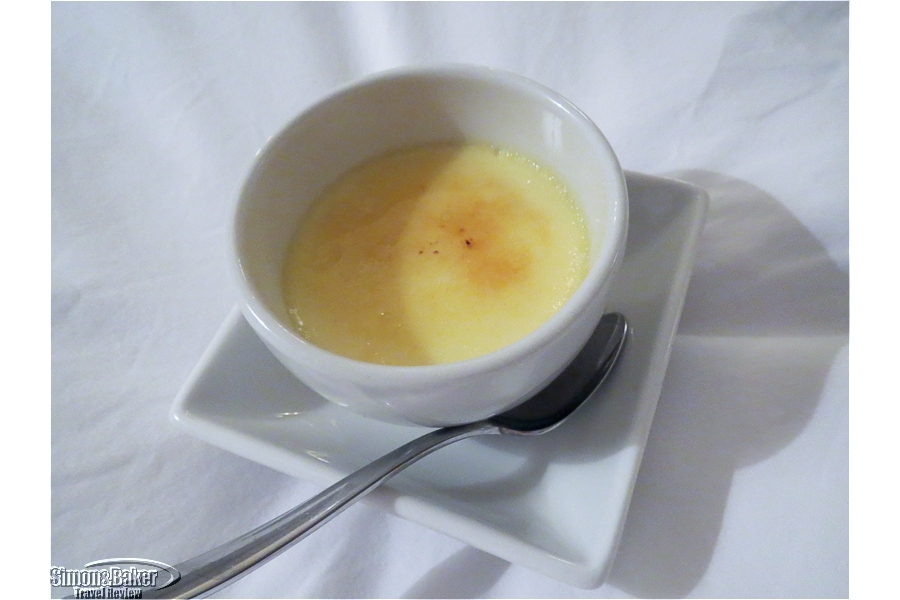 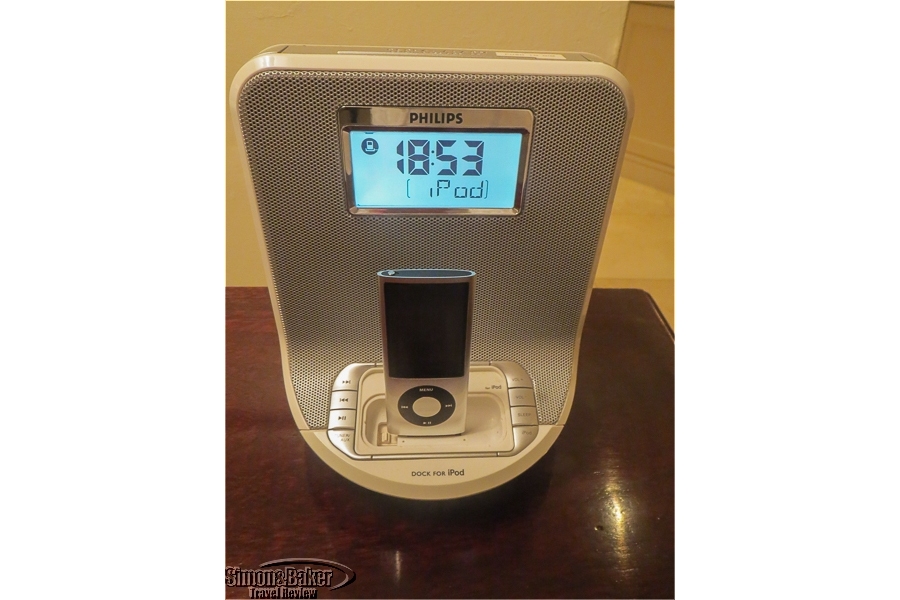 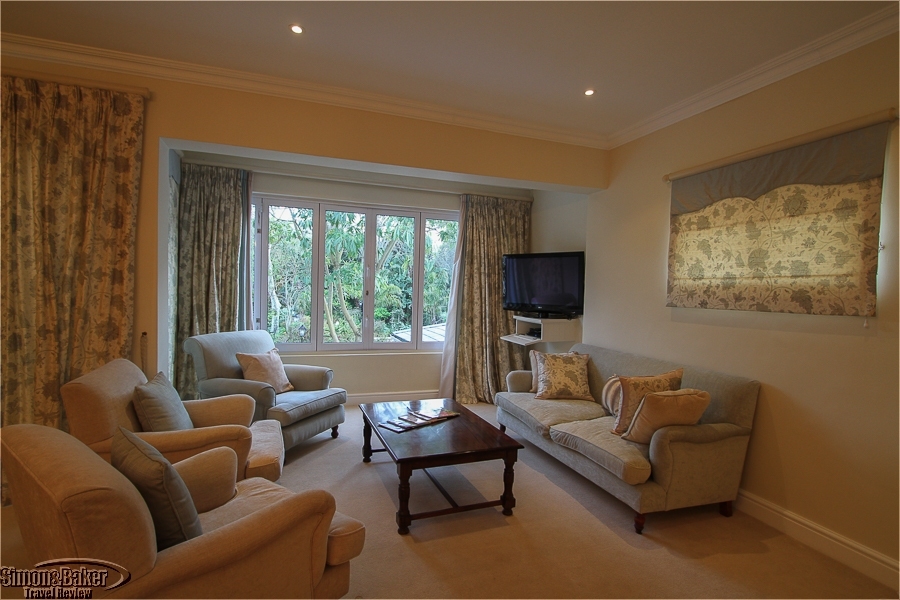 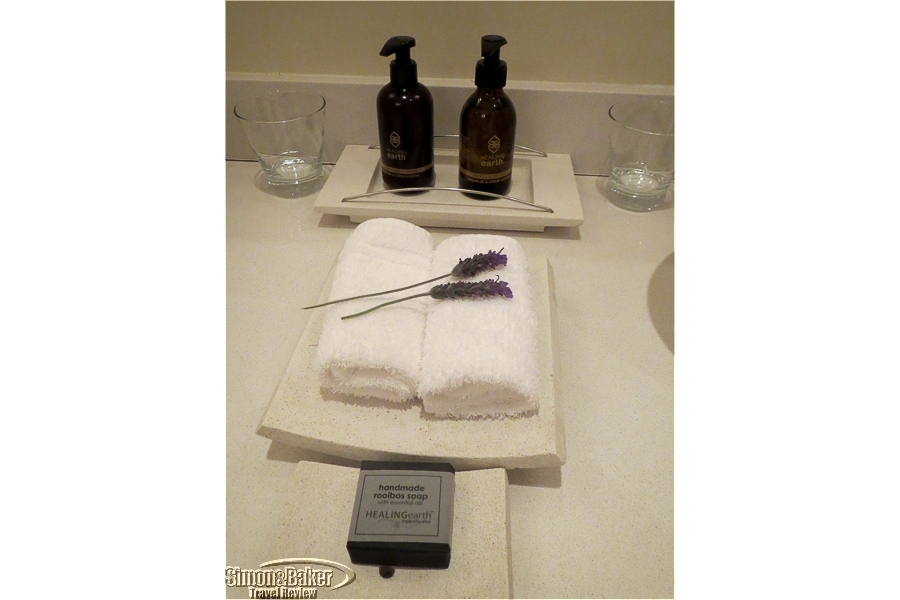 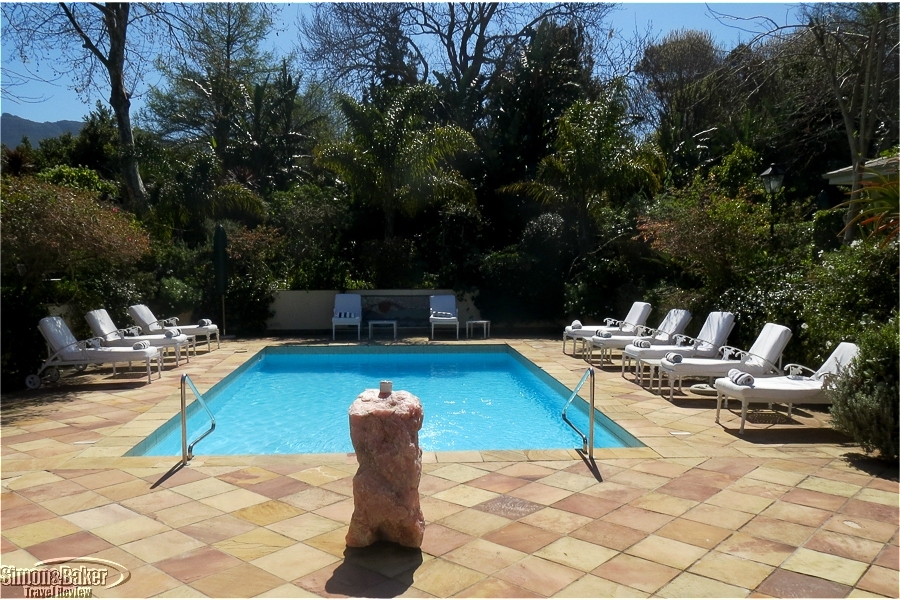 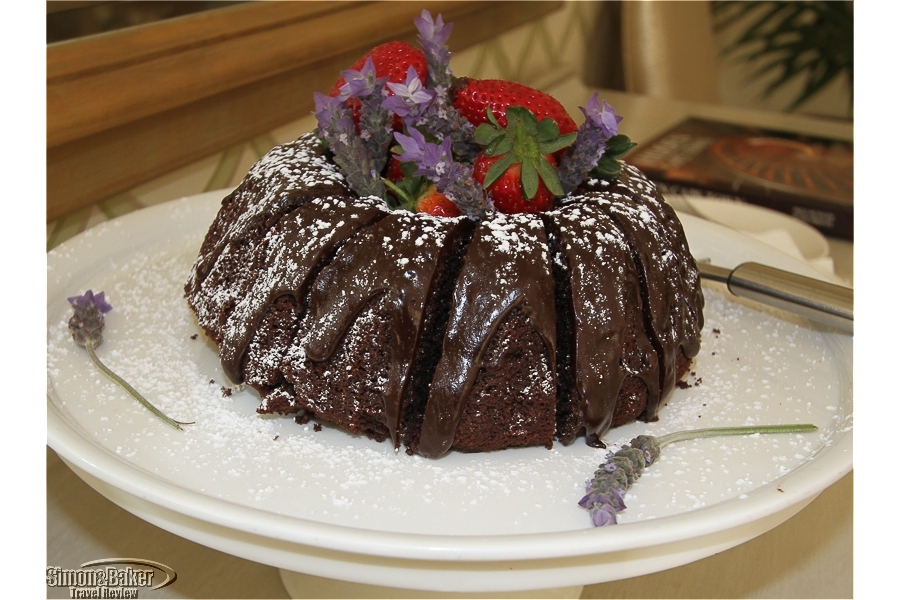 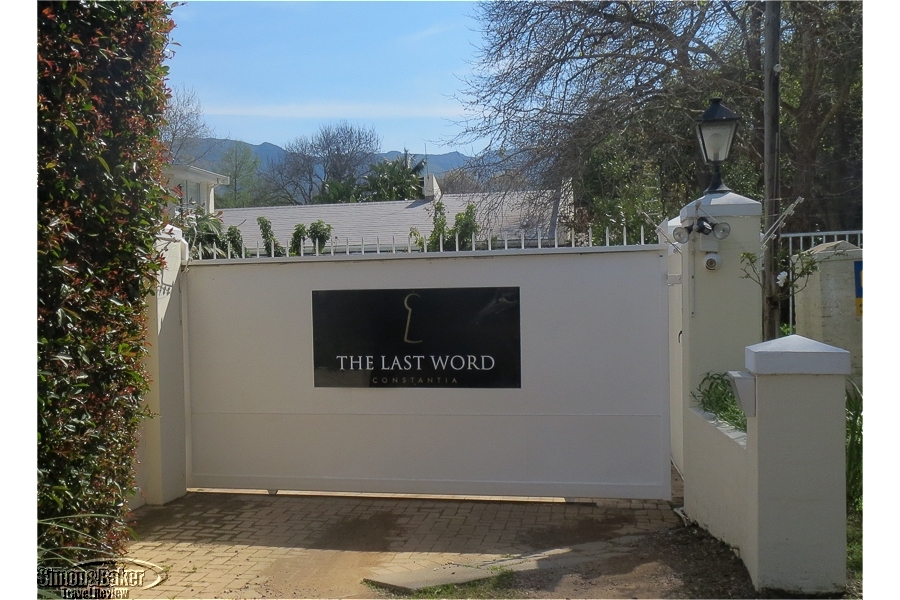 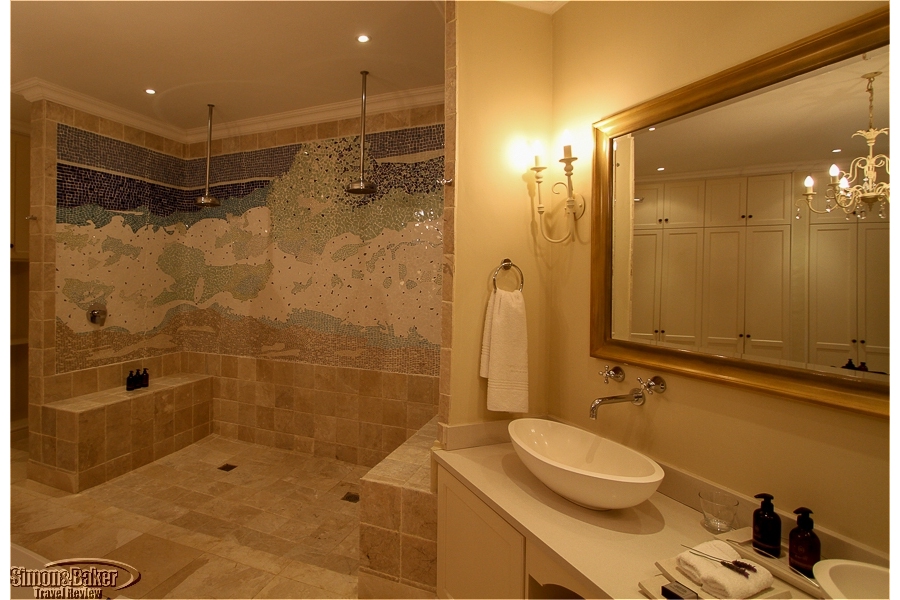 I liked The Last Word Constantia’s comfortable and stylish décor, including a water feature at the entrance, its well lit common areas, garden facing dining room, its location in Constantia, and the bed and breakfast’s serene atmosphere.
Overall Impression Located within a gated one acre property in Constantia, an upscale leafy suburb of Cape Town, South Africa, The Last Word Constantia, a nine room boutique bed and breakfast, offered an intimate ambiance, service oriented staff, a well appointed room with a view, and a pretty pool and garden setting. It was elegant and understated at the same time.

I liked The Last Word Constantia’s comfortable and stylish décor, including a water feature at the entrance, its well lit common areas, garden facing dining room, its location in Constantia, and the bed and breakfast’s serene atmosphere. My elegantly furnished and comfortable first floor room was filled with sunlight and had a view of the garden and the mountain. I liked the open style of the room, especially the pretty doorless shower with a tile design on the wall, and a view of the gardens. It was a bit like taking an outdoor shower indoors.

From my brief stay there, I have fond memories of birdsong and the African calls of hadida ibis, enjoying a tasty salad lunch with a garden and mountain view in my room, soaking up warm rays poolside (the water was too chilly for a dip that winter day), and going for a jog around the neighborhood in the cool early morning. Should I return to area The Last Word Constantia will be at the top of my list of luxury bed and breakfast options.

Class of Accommodation Five Star Hotel (breakfast was the main meal served, although other food was available)

Connectivity There was complimentary high speed (10 megabits per second) WiFi. It worked well during my stay.

Handicapped Access Two of the rooms on the ground level, rooms 3 and 4, were wheelchair accessible.

Size There were nine rooms, large living area, dining room and breakfast conservatory, and pool within a one acre property. There were 15 staff members.

Year Opened-Renovated The property opened in 2005. The most recent refurbishment of the rooms, main living area, lounge and dining room took place in 2010.

Lobby and Common Areas A sign on the external gate of the property confirmed I had arrived. After calling from the driveway callbox someone opened the gate. I drove straight into a parking spot immediately adjacent to the entrance.The interior of the main building was quiet, filled with natural light, had shiny flooring, and was comfortably furnished in traditional Country English style. The living and dining areas had views to the pool and garden and the mountain in the background. There were David Filer pencil etchings and an oil painting by M. Chiarla.
Bathroom I liked the open design of the doorless bathroom with an oversize shower area that took up the back wall and khaki stone floor tiles. The shower, also doorless, was decorated with miniature tiles which formed a pretty figurative wall design. There were two rain-shower showerheads, providing ample water flow and an easy to adjust water temperature. From the shower I could look out directly into the garden. It gave me the impression of almost having an outdoor shower.

To the right of the shower there were twin sinks and a vanity area with an armless chair and a handheld vanity mirror. There were two mirrors hanging on the wall, one above the sinks and the other over the vanity. In the central area there was a stand alone oval bathtub. Adjacent to it there was a wood table with bath toiletries. On the far back left side there was a water closet with a toilet, bidet and small sink. The towels were clean smelling.

Room I liked my comfortable and well appointed room at the property. I stayed in Room 8, a 95 square meter Elegant Suite, one floor up from reception above the dining room, facing the garden and pool. From the entrance door, a hallway led into the single space with living, dining, bathroom, and sleeping areas. It had wall to wall khaki carpeting except in the hallway and bathroom. Features included high ceilings, recessed lights, framed and glass covered artwork, pretty fabrics, elegant flower pattern curtains, thermostat controlled temperature, oversize windows facing the garden and pool area, fresh flowers, and a small outdoor terrace with a table and two chairs.

There was a sitting area with cloth furniture including a love seat, three armchairs and a rectangular wood coffee table. In the corner there was an LG flatscreen television mounted on the wall. There was a round dining table with two armless cloth chairs. Against the far wall there was a cabinet which housed a mini bar with a small refrigerator, a hot beverage service and snacks.

A large firm and comfortable bed with a duvet and four feather pillows, a headboard, two identical night tables and lamps took up the center of the room. The property name and logo were embroidered in the middle of the duvet in the same color of the fabric. There was a bench at the foot of the bed and a chandelier style lamp above the bench. The bed rested against a half wall that separated the bedroom from the bathroom. It had folding shutters for privacy. There was no door. The left side of the bathroom was a floor to ceiling wall to wall built-in wardrobe with hanging and shelf space and an electronic safe.

Food and Restaurants Breakfast was served between 8 a.m. and 10 a.m. The buffet had several cereals, deli meats, salmon and smoked fish (mackerel), cheeses, fruit juices, breads and pastries, and fresh fruit salads. Also on offer was a made to order hot breakfast consisting mainly of egg dishes. Although the only meal available was breakfast there was a restaurant next door and they had two delivery menus to choose from for in-room dining.
Amenities There were Healing Earth toiletries including bath salts, soap, shampoo, body gel and body lotion, as well as shower caps, and cotton swabs. Temperature controls were via air conditioning and underfloor heating. There were also heated towel racks in the bathroom. For the turn down service the staff brought a small cup of crème brulee. At tea time the first day, there was moist chocolate cake (a favorite) with strawberries on top. There was a telephone on the left side night table and a Philips radio with iPod docking capability (a favorite) on the right night table. There was satellite reception on a large wall mounted flatscreen television in the living area. There was also complimentary wine, sherry, water, and sodas in the minibar, ahot beverage service and snacks (cookies, and dried fruit and nut mix from The Treat Company). There was a flower arrangement on the dining table. At breakfast there were local newspapers available for guests in the dining room.

Pool The pool area was inviting. In the center there was a 40 square meter pool ranging in depth between 1.1 meters and 1.5 meters. There was a large pink rock decorative art feature immediately in front of the pool. Lounge chairs and umbrellas lined the sides of the chilly pool.

Other The Garmin GPS in my rental car directed me to the wrong address a few blocks away from the property. A local kindly directed to the correct place. Although the laundry list indicated 48 hours were required for laundry or dry cleaning, the manager, said it was same day service. I turned in the single item of laundry Friday afternoon and received it early Sunday morning. A massage with Caroline was a lovely way to unwind. The property received a TripAdvisor Certificate of Excellence 2015. 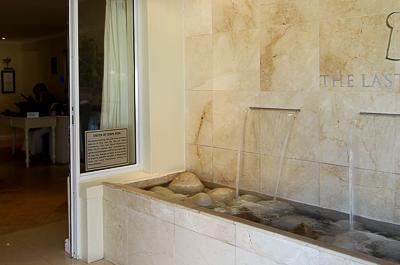 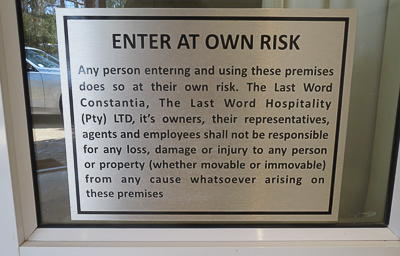 There was a prominent liability disclaimer at the entrance.

Service There was twice daily service. Tess, who greeted me on arrival and made sure I was well settled, was friendly and attentive. I also met Thom, who took care of the turn down service. Sam, who had a pleasant demeanor, was in charge over the weekend. There was off street parking behind a gated entrance and staff onsite 24 hours. No one answered the phone at reception at 7 p.m. on Saturday. Staff were attentive at breakfast. When I asked if they had bubble wrap for a bottle I wanted to pack, one of the staff kindly wrapped it for me while I had breakfast.