The Test Kitchen by Luke Dale-Roberts 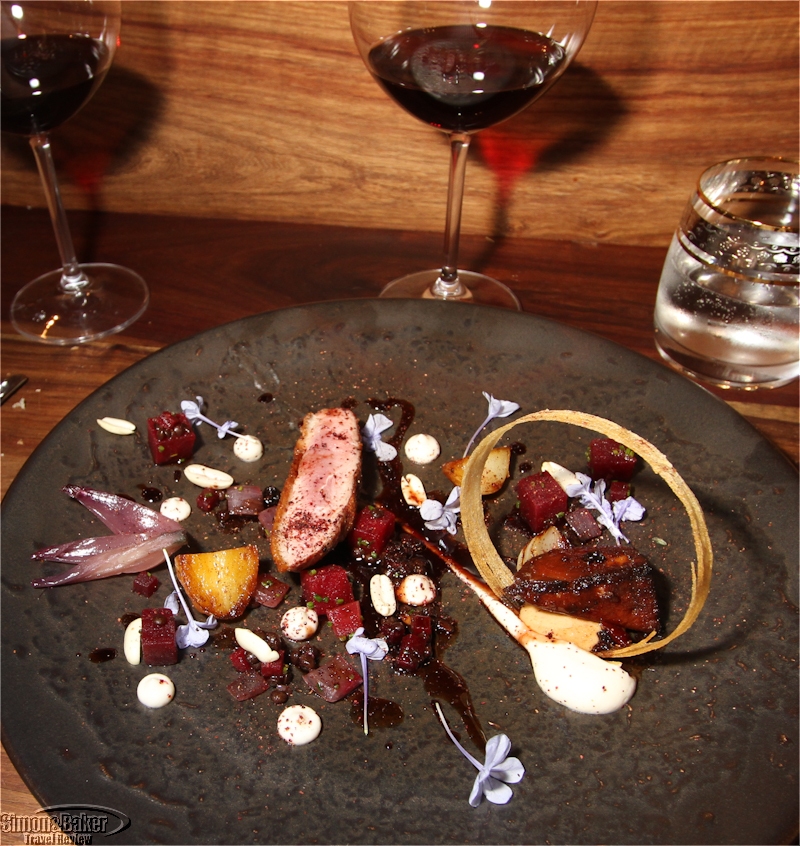 We would gladly return the next time we are in Cape Town.


Overall Impression This urban gourmet restaurant won us over with its bustling ambiance, friendly service, and elaborate gourmand meal. We arrived in the early evening to find a sparsely filled dining room. A reservation error had nearly cost us our table on our last night in Cape Town so we were delighted to discover we had been seated at the Chef’s Table, at an elevated counter immediately in front of the executive chef and the open style kitchen.

We soon confirmed that from our stool seats we could observe the chef while he cooked and, to varying degrees, the rest of the kitchen staff as they performed their culinary tasks. As we settled down the chef greeted us warmly and for a few minutes, before the dining room filled up, we had a chance to chat with him.

For the remainder of the evening, between sips of South African wine and bites of our nine course Gourmand Menu, we watched, entertained, the chef and his staff prepare dinner for everyone, including, we later discovered, his parents who were visiting from the United Kingdom and sitting discretely and proudly in the next table.

We throughly enjoyed the dinner and a show evening, and especially our seats at the Chef’s Table. The meal was satisfying, well prepared and well served, and observing the chef and his staff cooking up close was fun. We would gladly return the next time we are in Cape Town.

About The Executive Chef British born Chef Dale-Roberts first trained at Baur Au Lac Hotel in Zurich, Switzerland. On his return to London, he worked at French fine dining restaurant Elenas L’Etoile under Kevin Hopgood before moving to Australia where he explored Pacific Rim fine dining.

When he returned to London he worked at the Bali Sugar. From there he moved to the Soho House Media Club as executive sous chef. During five years in Asia he launched several restaurants in Singapore and Seoul. In 2006, he became executive chef of La Colombe at Constantia Uitsig near Cape Town, South Africa. During his tenure, the restaurant received two Eat Out restaurant of the year awards, Eat Out chef of the year, and culminated with 12 position in the San Pellegrino World’s 50 Best Restaurants recognition.

Handicapped Access According to a spokesperson, there was handicapped access through the main entrance to the restaurant and there was a public handicapped toilet in the Biscuit Mill shopping centre.

Location The restaurant is 3 kilometers from the Cape Town business district in an revamped shopping center in an industrial looking inner city neighborhood.

Opened-Renovated The restaurant first opened November 2010. In December 2011, the restaurant was extended and a sister restaurant, The Pot Luck Club, opened in an adjacent space.

Size The 120 square meter restaurant had space for 50 guests and employed 14 chefs and 17 waitrons.

DÉCor-Ambiance The interior design was by Casamento, Inhouse Brand Architects, and Truly Fantastic. Original artwork was by Peter Eastman, crockery by Imiso Ceramics and crystal by Crystal Direct. The restaurant had a metro underground urban trendy ambiance reminiscent of San Francisco. It was bustling and noisy.
Cellars Wine And Alcoholic Beverage Selection Apart from champagnes all wines were from South Africa. There were 90 types of wine from different regions. Also available were imported and local beers and ciders. There were three types of vodka, 13 types of whisky, four types of rum, and 14 liqueur options on the bar menu. There were also two still and two sparkling brands of bottled water.

Special Menus The restaurant offered a nine course Gourmand Menu for 700 rand or 950 rand including wine pairings and a five course Discovery Menu for 470 rand or 660 rand with wine pairings.

Meal Dinner was intriguing and diverse in its preparation and pretty in presentation. As if there would not be enough to eat dinner began with three types of bread: warm bread on a wood board served with a chunk of butter, salt shavings, paprika and rosemary; pappadam bread served on a wood plate with a wood butter knife and Madagascar salt; and shortbread, porcini mushrooms, truffle juice, duck liver pate, truffle chocolate and salt. We sampled all.

The meal proper began with “Egg on toast,” a truffle infused quail egg on toast, flavorful and light. Next we had Home dried tomato, pickled tomato, miso cream cheese, wood fired aubergine (eggplant) dressing and jalapeño and apple purée (since I requested no hot flavors the chef sent the jalapeño aside on my portion) served with a dry 2010 Rainbow’s Merlot; and “Scottati” of beef fillet and smoked bone marrow, Luke’s walnut XO dressing and crispy salad (with daikon, ginger and pea jus) served with a mildly tangy 2010 Bosman Dolce Primitivo. The blend of meat, greens and the dressing of this dish worked well and left a spicy smokey flavor and mild after taste from the chili oil in the back of my throat. A mousse-y Foie gras “Ajo blanco” followed: foie gras mie cuit (from imported duck liver), almond streusel, smoked garlic and almond purée, pickled grapes, rabbit ham and hibiscus powder served with a 2010 Joostenberg Chenin Blanc Noble Late Harvest. The pickled grapes and mild garlic worked well with the dish.

We were then served Salmon sashimi, red cabbage three ways, apple dressing with horseradish served with a 2010 Sequillo White from a “rock star” winemaker from the Swarland region. The Morel glazed sweet breads, duck liver and morel “royal” with various onions, Lardo, burnt thyme and onion soubise served with a 2009 Lazanou Organic Syrah Mouvedre was surprisingly good. Neither of us favors sweet breads and we agreed this was one of the best if not the best we had sampled. The flavors worked well together, remaining cohesive and distinct at the same time. The wine had a slight vinegar on the nose but cut the fatty flavors of the dish well. It was our least favorite that night for a stand alone serving.

The following course offered two options “Shot pigeon” or Peking style quail. We each sampled one. The Foie gras poached Rock Pigeon, sage and butternut tortellini, beetroot and Frenabranca “Civet” sauce came with peeled blueberries that looked like entrails and was served with a 2009 Beaumont Pinotage from the Walker Bay area. The quail leg, prepared with red wine and porcini purée with lentil and tarragon velouté and broad beans, was served with a 2007 Sterhuise Merlot from Stellenbosch. It was very leg.

A cheeky sorbet with applet bits and Vietnamese gin and tonic helped us bridge the courses. It had a palate cleansing bitter, tart, green flavor and gel texture. Next, we had Langoustine, wood roasted corn purée, prawn “siu mai” with 3 citrus butter served with a 2010 Newton Johnson Chardonnay from the Upper Heaven and Earth Valley near Hermanus. We particularly liked the savory “sieu mai” and smoked baby corn.

The following course offered two options, duck or lamb. We each sampled one. The Pan seared duck breast and foie gras, essence of duck and fragrant tea with turnip purée and fresh peanuts garnished with lemon verbena flowers was served with a 2009 Paul Cluver Pinot Noir. The slow cooked “breast” and pan seared loin of lamb, harief glaze, white bean humus, ewe’s milk labneh with dry fig and cinnamon jus was served with a stout syrah and cabernet sauvignon blend, a 2007 Ataraxia Serenity. The dishes, while well prepared, had too many ingredients. I preferred the lamb loin by itself.

A pressed watermelon, uzu, blood orange sorbet with coconut gelee and tapioca pre-dessert was next. We were able to sample and enjoy two desserts, one each. The dessert from the Gourmand Menu and the one from the Discovery Menu. My partner had Frozen cashew and cinnamon parfait, pistachio butter, pistachio and olive oil cake with a saffron lassi foam and pineapple tarte tatin served with a wonderful 2006 Vondeling Straw Wine. I had Fig in two ways, olive oil ice cream, burnt nougat, Yoghurt curd with almond galette and fig vinaigrette served with 2009 Quoin Rock Vine Dried Sauvignon Blanc, the Discovery Menu dessert selection. The petit fours were maple marshmallow, rose water turkish delight and earl grey ganache dusted in green tea powder.

Service Staff though harried in appearance were always friendly and efficient. We never lacked for anything during our meal. Nine courses of glassware, silverware and dinnerware were removed seamlessly and unobtrusively. Wine and water glasses were refilled as if by invisible hands. 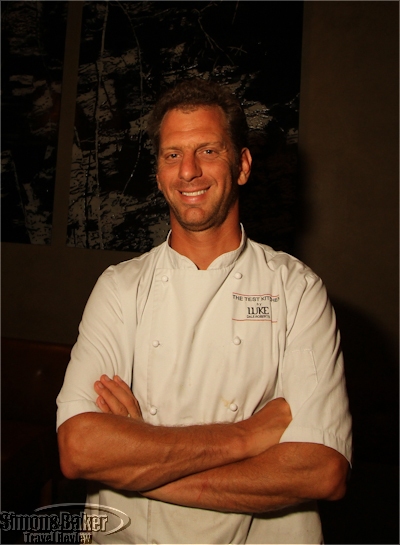 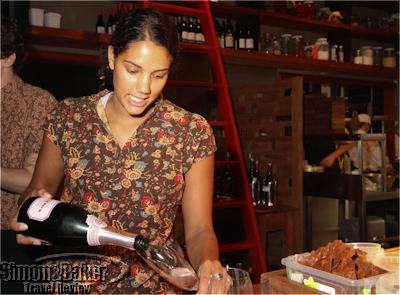 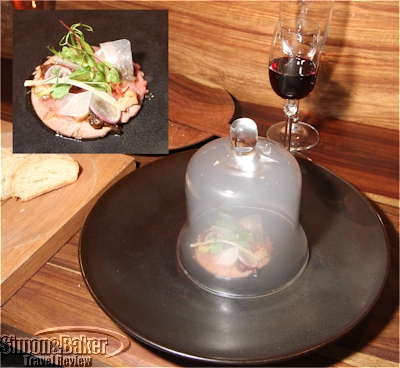 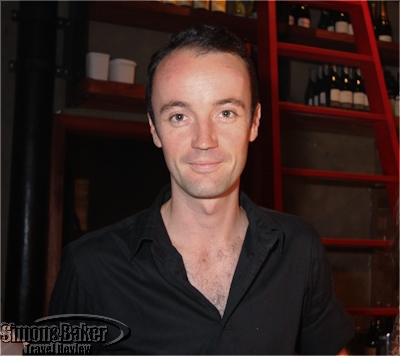 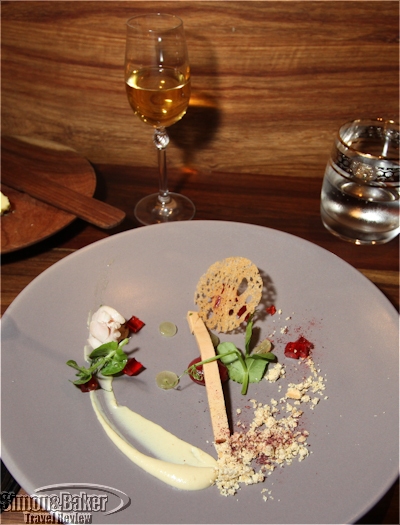 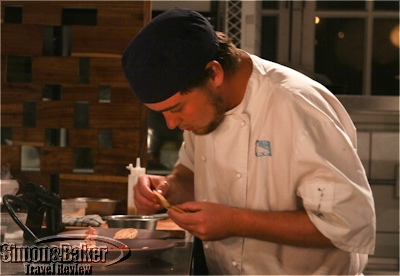 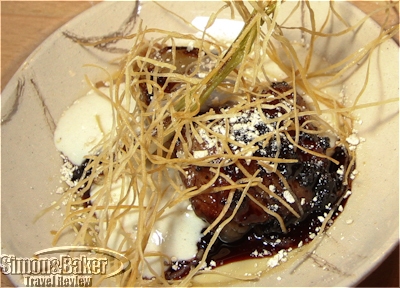 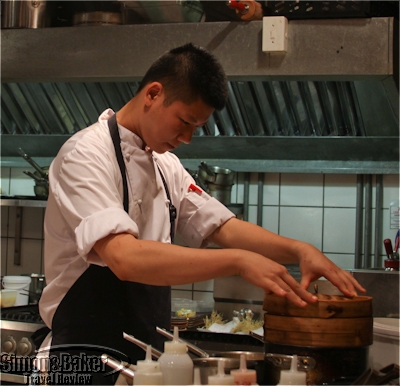 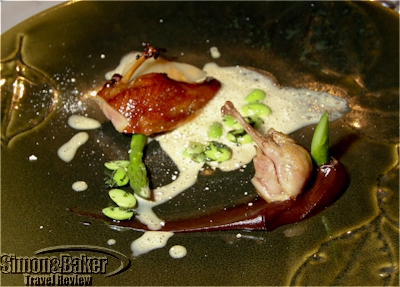 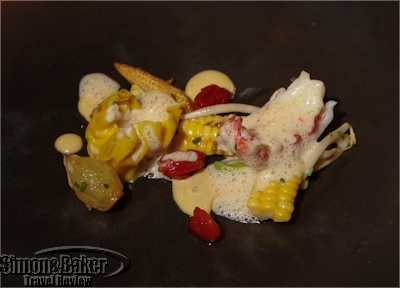 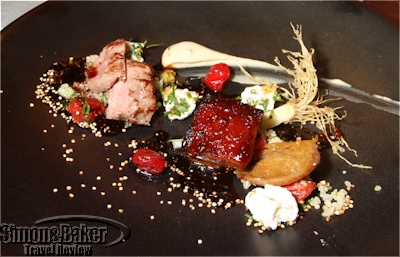 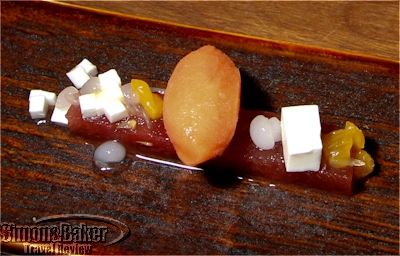 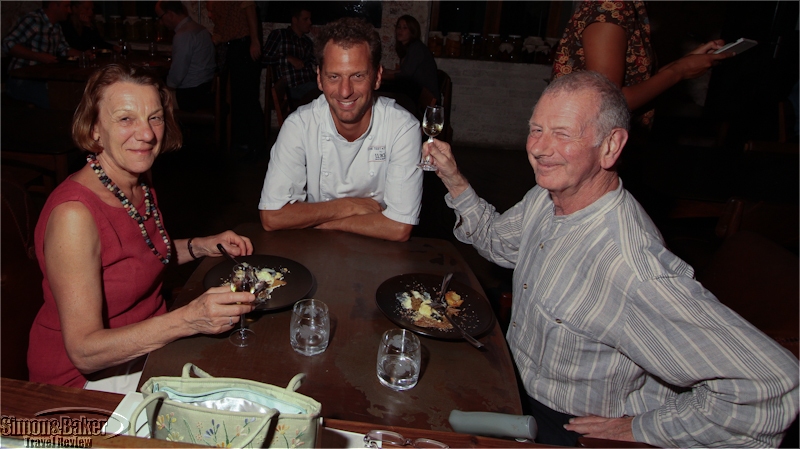