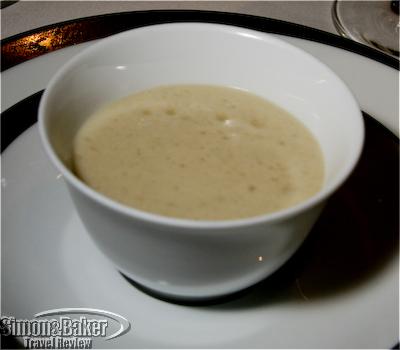 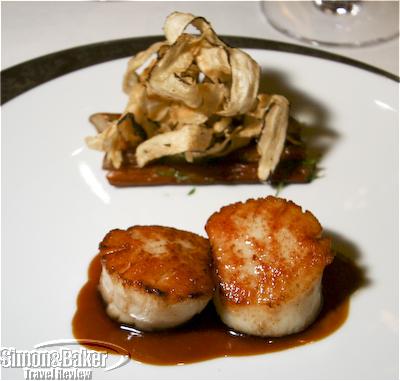 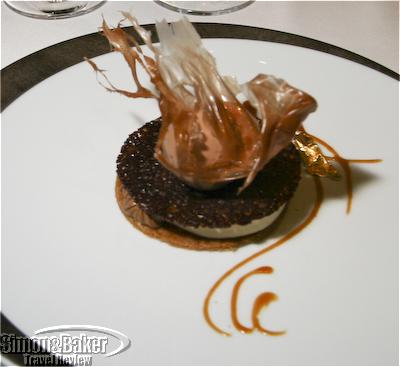 Taillevent provided a satisfying and pleasant meal worth repeating.


Overall Impression Since our last visit to this well known Parisian restaurant in the posh eighth arrondissement the property had been revamped and the meal service improved. We appreciated the warm and cordial service and tasty meal during our recent lunch there and were pleased with the changes.

The redecorated interior was contemporary, in shades of brown and gray, contrasting with the historic building. In the same way, the classic dishes and attentive service worked well with the subtle modern décor and historic setting, they had just enough modern touches to play off traditional flavors and styles without ever being edgy.

From our corner table in the downstairs first salon we could observe the quiet dining room. To our right there was a single Japanese man (he spoke no English) eating his way quickly through what looked like a tasting menu. A large table against the far wall was temporary home to a mixed group of French and English speakers. Around the room everyone seemed to be savoring their meal and having a good time.

Staff were attentive and helpful, adding a personal touch to our dining experience. Our visit was pleasant and emotionally nourishing. Our four course lunch was well prepared and handsomely presented. Taillevent provided a satisfying and pleasant meal worth repeating.

Size The restaurant, 1,450 square meters in size, had space for 80 guests who were looked after by a staff of 47.

Sommelier Jean-François Lemoine although Manuel Peyrondet selected our wines the day we visited the restaurant.

Year Opened-Renovated The restaurant opened in 1946 and the most recent renovation took place in 2004.

Style Of DÉCor Modern décor with wood paneling. The dining rooms are on two floors and included original paintings, prints and sculptures by modern artists. The silverware was Christofle
Special Menus The restaurant offered two set menu options (prices included taxes and service, excluded drinks): a four course Lunch Menu, only available at lunch, for 80 euros per person; and an eight course Discovery Menu for 190 euros per person served for lunch and dinner.

Meal We began with a glass of champagne as an aperitif. Soon a plateful of small cheese puffs and a bottle of Chateldon mineral water appeared. We placed our selections in the chef’s hands with the only restriction being no raw oysters for me. He served us a foie gras and artichoke pre-appetizer; it was light with a pudding like texture and slightly smoky, reminiscent of chestnuts.

Our first course was a finger-licking-good prawn dish (we were invited to hold the prawns with our fingers and provided finger bowls to rinse our hands), Epeautie du Pays de Sault en risotto aux Gambas et Curry . This dish had a comfort food like feel. The wine: a Rhone Valley Condrieu “Cherry” Domaine Perret 2004.

In lieu of our choice of cheese from the traditional cheese cart, the chef sent us a delighgtul creamy ewe’s milk cheese with almond bits and pumpkin gelee and pumpkin slices , Frommage de Brebis, amandes et Potiron . 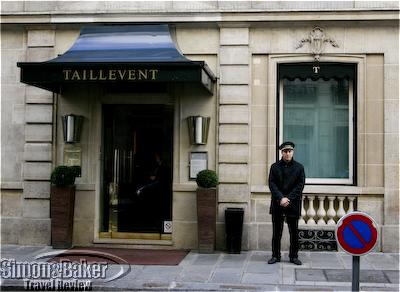 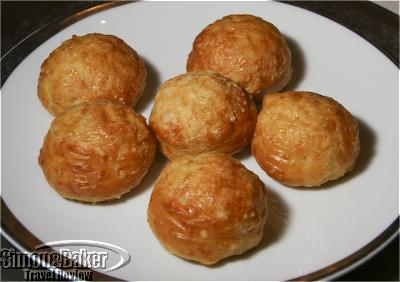 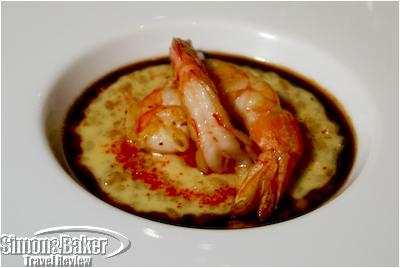 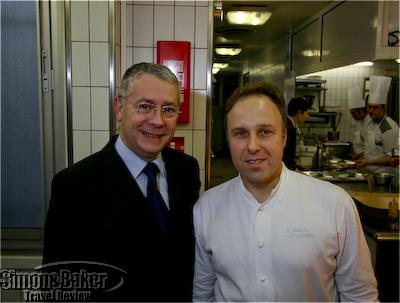