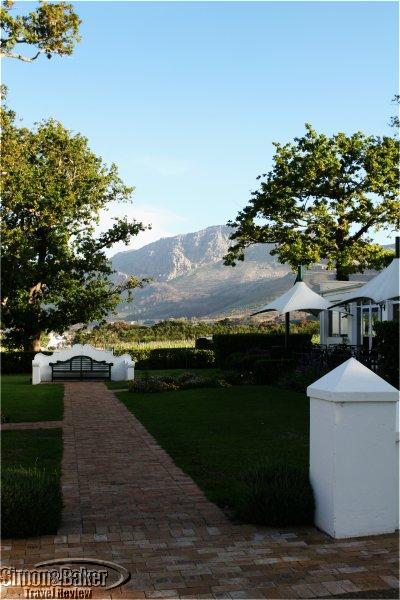 We look forward to a repeat visit to the Steenberg with its soon-to-be-completed spa facilities and revamped pool.


Overall Impression Our half hour drive from the Cape Town airport to the Steenberg Hotel was easy. On the way, we admired the beauty of the area including the mountainous background that gave it a dreamlike quality. Inside the property, which shared space with an upscale golf community, there were grapevines lining the road. At the Steenberg, we were close enough to enjoy all the benefits of bustling Cape Town and yet it was a different world of serene beauty.

We liked the Steenberg’s quiet ambiance and its stately demeanor reminiscent of the pioneer days of wine making. Our room was comfortable and spacious with an attractive bathroom and stunning vineyard and mountain views, particularly in the early morning when the morning light decorated the mountain scenery. We appreciated the convenience of Catharina’s, an onsite restaurant where we enjoyed breakfast and dinner, and the complimentary Internet access in the hotel’s lobby. The Steenberg was an ideal place to recharge our “batteries” following a long international flight before continuing to other parts of South Africa such as the famous Garden Route. We look forward to a repeat visit to the Steenberg with its soon-to-be-completed spa facilities and revamped pool.

Connectivity There was a complimentary Diginet line available 24 hours a day from the guest computer in the Barn Lounge which we took advantage of on several occasions.

Handicapped Access There were no special rooms or design features for wheelchairs or handicapped guests.

Location In the Constantia Valley at the foot of the Steenberg Mountain, a short drive from Cape Town

Size There were 30 rooms in three one-story and two two-story buildings and 76 staff on a 40 acre property.

Year Opened-Renovated Built in the 1700s and developed into a hotel in 1996. The wing where we stayed was built in 2003.

Lobby And Common Areas Traditional Cape Dutch style with antiques
Bathroom The open design bathroom was one of our favorite features. It was roomy with khaki colored marble floors and a bath tub which sat on a wood and marble base in the center next to a window. There was also a separate large shower with the same color marble and a glass door, a water closet, a heated towel rack and a glass covered scale. Twin sinks with marble tops and wood stands were on either side of the bathroom. For privacy it was possible to close the dark wood French doors that stood guard over the entrance of the bathroom area.
Room Our vineyard facing room, the Sylvaner (No.29) was located at the end of a row of rooms in the Spurwing, the newest part of the hotel. The entrance was a hallway where we found a wooden armoire containing the minibar. Across from it there was small wood table and a chilled water service. Beyond the hallway, there was a sitting room area facing another armoire which housed a remote controlled satellite television and electronic safe. There were two wall facing wood tables with lamps and a chair. One of them had a coffee and tea self service; there was a mirror above the other. In front on the armoire there were two comfy cloth chairs with a table between the beds. Against the far wall there were two twin beds close together with a wooden headboard, warm duvets and feather pillows. There were also wood night tables and lamps to either side of them. We placed our luggage on the large multi-use wood tables at the foot of the bed and beside the side wall.

One of the predominant decorative elements in the room was wood. Earth tones blended with brighter colors in the furniture, wall to wall rug, cloth furniture and curtains Although this area of the hotel was new, the wood beam ceiling and overall design of the building gave the room a nostalgic feel.

We set the temperature in the room with the remote controlled air conditioning/heating unit. It was also possible to turn on the heated floor boards which made the floor warm and pleasant to walk on when the weather was chilly. Thin walls or part of the building design meant we repeatedly heard our neighbors talk, cough and sneeze, especially in the early evening when we were getting ready for dinner (in a subsequent visit, the property manager assured us that improvements had been made in the soundproofing.)

Two French doors led to the back vineyard and a beautiful view to the mountain. There was a small garden in the background, two lounger chairs, a table and chairs set in a small private patio.

Food And Restaurants Catharina’s was the restaurant for all meals at the Sreenberg. Capetonian chef Garth Almazan’s creations and the 17 century winery com dining room made an appealing combination. For breakfast we served ourselves from the cold buffet: cereal, fresh and preserved fruit (watermelon, cantaloupe, pears, kiwi, raspberries, guava and litchi), cold cuts, salmon, pastries, sparking wine and fruit juices. Dinner was a smart casual affair with a nearly full dining room. We enjoyed savory wild mushroom and mozzarella salad, a hot and sour soup and spicy prawn appetizers although the shredded duck and risotto were less to our liking. The kudu steaks which we order twice were memorable as was the rack of lamb. We liked the chocolate fondant for dessert the first night. There was also a cigar bar next to Catharina’s for pre- or post-dinner drinks. Catharina’s won the American Express Platinum Award for Fine Dining 2005. It also received five stars from Tourism Grading Council of South Africa, making it the first restaurant in the region to receive the distinction.
Amenities There were medium size bottles of scented bath and shower gel, conditioning shampoo body lotion from Charlotte Rhys, bath salts in a bowl, tea candles, cotton swabs and balls, shower caps, branded cotton bathrobes, slippers, electronic safe, complimentary bottled water at turndown, and tea and coffee self service.

Facilities In addition to the main building, there was one swimming pool available to guests, a restaurant, cigar bar and an award winning working winery. With advance planning Hotel guests had access to the neighboring residential championship golf course.

Pools There were two pools, one 50 feet by 15 feet, which was under construction when we visited the Hotel and the other 25 feet by 20 feet located behind the building across from the restaurant.

Conference Facilities There were two meeting rooms capable of hosting between 16 and 30 people. A screen and flip chart were available.

Other The buildings, which date back to 1682, were restored to their former glory and are a National Monument. Steenberg holds the distinction of being the oldest wine farm in the picturesque Constantia Valley, which is considered by some to be South Africa’s premier wine growing region. The land was originally granted to a widow, Catharina Ras, in 1682. Wines were first produced on the farm in 1695. The farm was first known as Swaaneweide, Afrikaans for the feeding place of swans and was later renamed Steenberg, in honor of the imposing mountain which towers over it. As the southern-most wine farm in the Constantia Valley, Steenberg benefits greatly from the cooling influence of nearby False Bay. During our visit 62 hectares were under vines, with cultivars including Chardonnay, Semillon, Merlot, Cabernet Sauvignon, Cabernet Franc, Shiraz, Nebbiolo, Pinot Noir and Sauvignon Blanc.

The Steenberg was recognized as the 2005 “Luxury Hotel” during the 12 annual AA Travel Guides Accommodation Awards.

A Peter Matkoviche championship 18-hole golf course belonging to the Hotel’s neighbors was accessible to guests although advance reservations were recommended when we asked about tee-off times.

Related See our review of the Steenberg’s Heritage Suites. 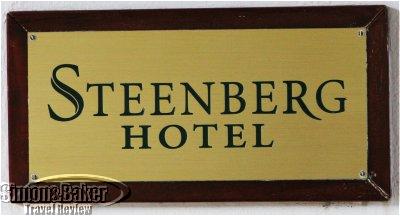 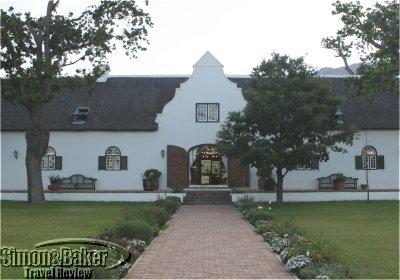 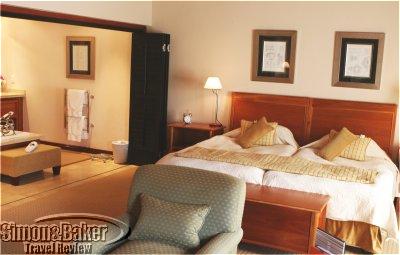 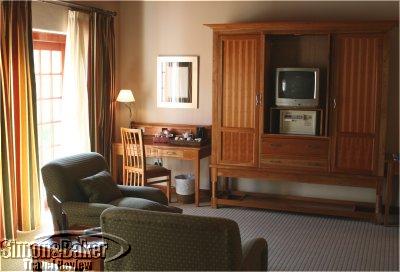 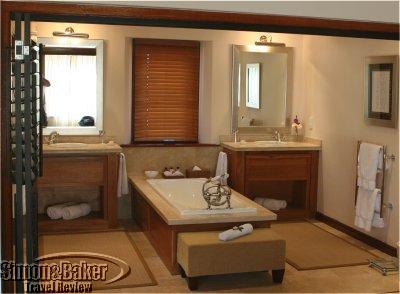 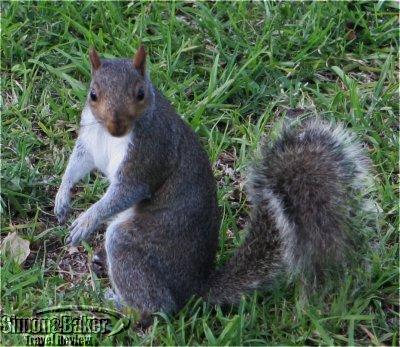 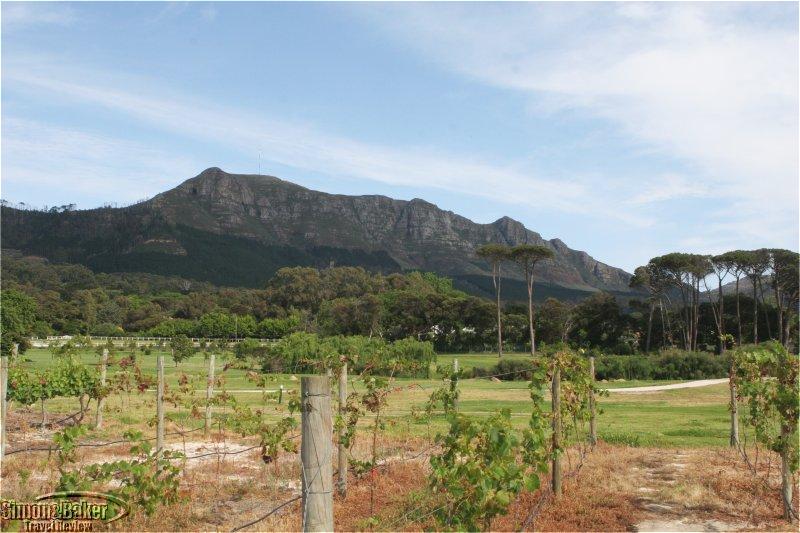 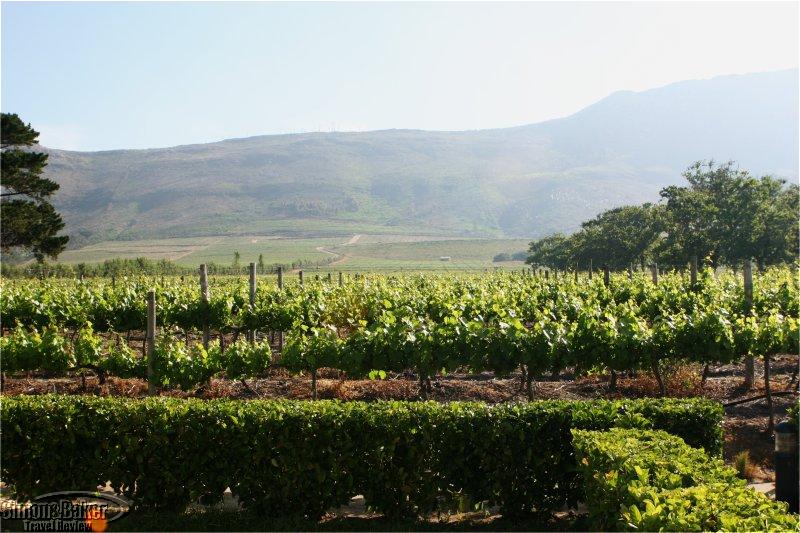