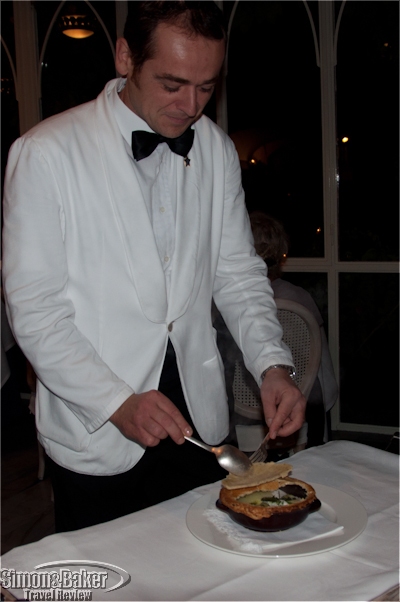 And recommend it as a mandatory stop to traveling friends who want to experience elegant Italian cuisine and gracious service in the grand Amalfitana tradition.


Overall Impression As is the case in most densely visited area anywhere, Italy’s Amalfi Coast abounds with local eateries eager to introduce hungry tourists to the local fare. On a recent visit to the area, it quickly became obvious that although the quality of food and service could vary wildly, menus were virtually interchangeable from one restaurant to the next; until I reached the Santa Caterina Restaurant. Located in the legendary five-star hotel that gave it its name, this superb formal restaurant welcomed its guests with the same flawless service, exquisite décor and eye popping views of the Amalfi coastline that have made the property famous for over a century. And best of all was Chef Domenico Cuomo’s menu: classic southern Italian cuisine, created from the freshest local ingredients and fish just out of the Tyrrhenian Sea. There were also sublime pasta dishes, homemade of course, the likes of which I hadn’t tasted since my Tuscan paternal grandmother made them for me when I was a child.

I was not surprised to discover that Chef Cuomo was for years regularly invited as a visiting chef to noted restaurants around the world, from New York’s Drake and Plaza hotels to Dubay’s Metropolitan.

Although it was visibly a big hit with the hotel guests, the Santa Caterina Restaurant equally welcomed lunch and dinner visitors, and has long been a favorite among area gourmets. “We always come here at least once, whenever we are in the area,” explained a couple that happened to leave the restaurant as I did. “We live in Rome, but we have a place down the coast. For us, the Santa Caterina is the best restaurant in Amalfi,” the wife volunteered; “one of the best on the entire coast,” her husband concurred.

As popular wisdom goes, just ask the locals. I will definitely follow their lead and plan to dine at the Santa Caterina whenever I revisit the area. And recommend it as a mandatory stop to traveling friends who want to experience elegant Italian cuisine and gracious service in the grand Amalfitana tradition.

About The Executive Chef A life-long resident of Furore, a remote village that clings to the rocky cliffs between Amalfi and Salerno, Domenico Cuomo knew from the tender age of 15, when he started with a summer apprenticeship with a local resort restaurant, that he was meant to be a chef. He went on to hone his skills with increasingly responsible positions in ever better-noted restaurants of the region before taking over the top job at the Santa Caterina in 1990. Along the way he also earned top honors in scores of national and international competitions in Italy and the Germanic countries. Through it all Chef Cuomo stayed true to his culinary roots: straightforward creations based on traditional dishes, using only the highest quality locally sourced products, and his own considerable skills and creativity (although he would be too modest to admit the latter).

Opened-Renovated The property first opened in 1904. The most recent renovation was in 2010.

Owned-Managed The Gambardella family has owned and managed the property for four generations.

Size The dining room could accommodate a maximum of 220 guests. It employed a staff of 41.

DÉCor-Ambiance The Santa Caterina Restaurant took full advantage of its spectacular location to delight guest with its surroundings as well as its cuisine. Perched on the main level of the property, on a rocky ledge 60 meters (200 feet) above the sea, it offered a sweeping view of the Gulf of Salerno and the historic center of Amalfi. The floor was a rare marine-blue veined marble that recalled the sky and sea beyond its arched glass walls, as did the round dining tables draped in floor-length deep blue cloths with crisp white linen overlays. Dining chairs were bleached wood with comfortable caned medallion backs and thickly cushioned seats with white canvas slipcovers. Verdant streams of ivy reached out of large ceramic tubs to climb up to the white plaster vaulted ceiling. In the daytime, the room felt like a sunny garden floating between sky and sea. At night, when all the tables were aglow with pillar candles in sparkling hurricane lamps and dancing candle light brushed the tall Riedel stem glasses and gleaming silverware of the table settings, the room became an exquisitely romantic space, with each table an intimate haven.
Cellars Wine And Alcoholic Beverage Selection The impressive 600 labels wine list featured a wide selection of southern Italian wines as well as other wine-growing regions of Italy and France. It offered some local favorites by the glass including a lovely Prosecco (a crisp northern Italian sparkling wine) that I especially enjoyed as an aperitif. A selection of bar drinks was also available.
Meal We enjoyed several meals at the Santa Caterina Restaurant. Since my preferences tend to go toward local specialties and fish dishes, I was delighted with the menu on both counts. However, for guests who preferred meat, I noticed several interesting options as well. Highlights of my meals included a superb dish of ravioli filled with chopped zucchini and fresh buffalo Ricotta cheese, served with a creamy lemon sauce (Amalfi lemons are reputed throughout and beyond Italy for their rich sweet flavor). A lightly baked local sea bass fillet served on a crisp potato pancake with baby vegetable and glazed cherry tomatoes proved a perfect choice for a satisfying rainy-day lunch.

Especially memorable was our last dinner when our attentive Maitre d’hotel, Pino, suggested a “local traditional fish stew. It’s not on the menu but I think you will like it.” We acquiesced of course, and were treated to a medley of shrimps, clams, several kinds of fish and cubed vegetables in a rich consomé-like stock. The dish was served en croute, steamed to perfection in a heavy, individual crockery pot under a delicious herbed pastry crust. With it, the sommelier recommended Furore Bianco Fiorduva, a fragrant, full-bodied local white wine. Then came the coup-de-grace. We hadn’t given any advanced thought to dessert, but Pino had. He suggested another local specialty “Il soufflé al gusto Amalfitano”, or Amalfi-style lemon soufflé. How could he have guessed that lemon soufflé is one my favorite desserts? I wondered. Apparently, mind-reading is part of the service at the Santa Caterina. Pino had quietly pre-ordered the soufflé (said on the menu to require 50 minutes’ notice). It arrived within instants, golden and sky-high, with its decadent lemon-flavored creme Anglaise accompaniment. And to top off this perfect meal, it was paired with a glass of Vino Santo, the Italian nectar-of-the gods answer to the French vendange tardive dessert wines.

Date Of Most Recent Review October 2012

Service The service was flawless, attentive and friendly while remaining unobtrusive, and precisely orchestrated with all the decorum of a bygone era. 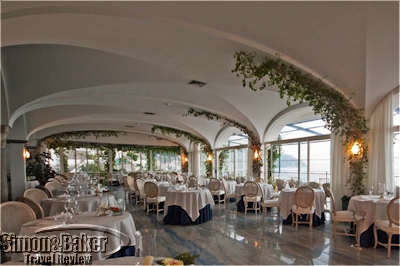 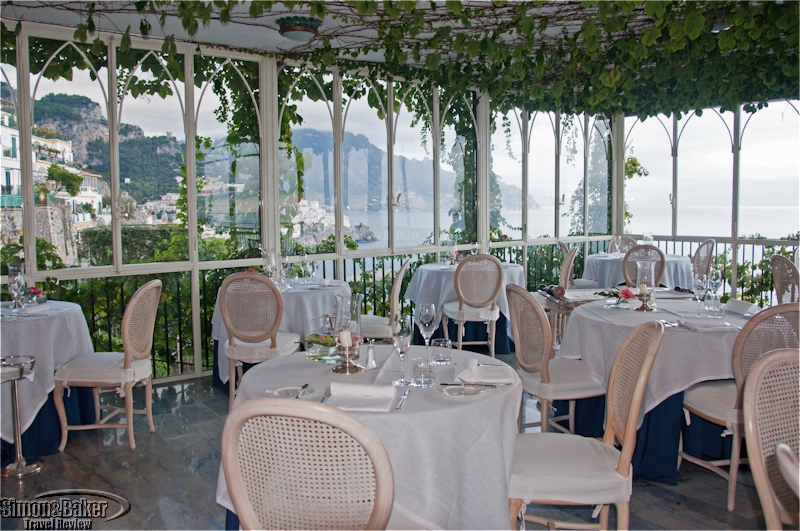 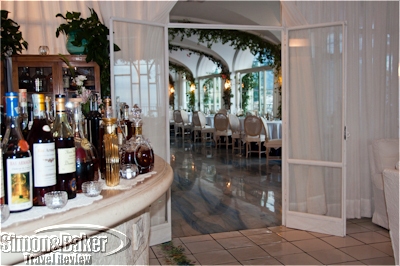 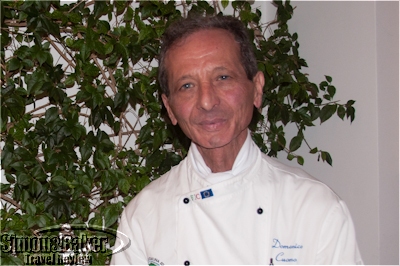 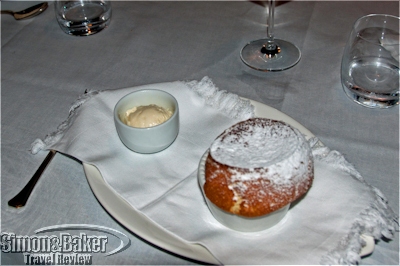 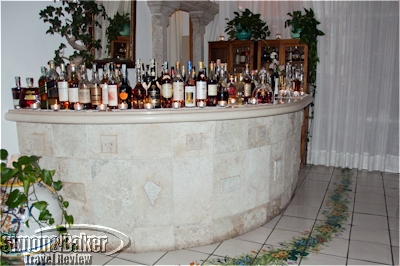