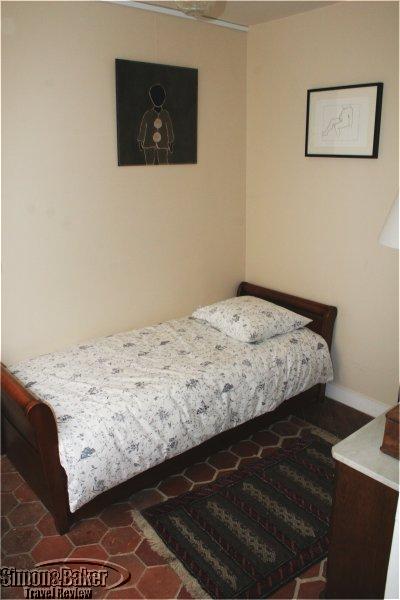 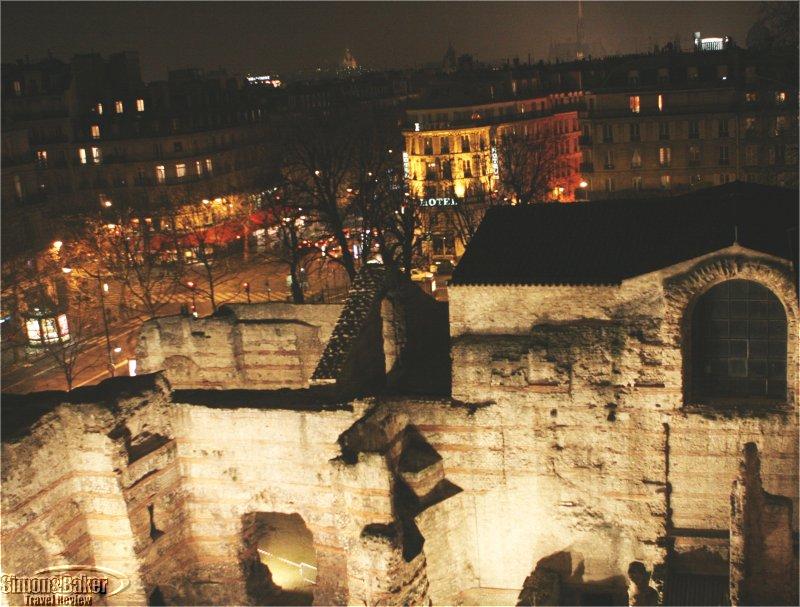 We loved the cozy ambiance, clean, contemporary style and excellent view of this two-bedroom Parisian apartment a short walk away from the Latin Quarter.


Overall Impression A friend asked recently, after hearing our complaints about the cold weather in Paris, why we were there in winter. Summer, he reasoned, was warm and we wouldn’t need heating or cold weather clothes. Right he was. And yet, we enjoy the holiday spirit and seasonal foods available in Paris at the end of the year. People seem to be in good spirits and we make time to take advantage of the countless choices the City of Lights has to offer or just relax and enjoy being there. The 700 square-foot apartment on Rue des Ecoles enhanced our stay, providing a centrally located, pleasant, clean and comfortable corner to call our own for our month long sojourn.

One of our favorite features of the apartment was the view. From the kitchen, and living/dining area where we spent the majority of the time, we could almost touch the ruins of the medieval Cluny Museum. Beyond the ruins we could see famous Notre Dame church to our right. Glancing to the left, on a clear day, we could distinguish La Samaritaine department store and beyond it the wedding cake structure of the Sacre Couer. The two-bedroom apartment was on the fifth floor a 17 century building just a few steps away from the well known Boulevard St. Michel (or “Boul Mich” as the Parisians refer to it).

Inside, the apartment had antique wood and tile floors, two small bedrooms and a bath room between them, a kitchen which opened to the living/dining area, a narrow balcony and lots of windows.  The windows were a blessing, funneling light (and sometimes the cold) indoors and making our small space seems larger and quietly appealing. It was cold enough that we had to buy an electric space heater and risk paying extra for the electricity.

We enjoyed our time at Rue des Ecoles. We liked the renovated interior, including a modern bathroom with a large American style shower/bathtub and a washer and dryer; the modernized kitchen (though we sorely missed having a dishwasher), cordless phone and high speed Internet connection. Having a landlady (and her French boyfriend) whose spoke English and French fluently and understood American and Anglophone customs was an added bonus that made our interaction and discussions easier and much more pleasant than those we had with Parisian agency representatives. We loved the cozy ambiance, clean, contemporary style and excellent view of this two-bedroom Parisian apartment a short walk away from the Latin Quarter.

Connectivity High speed wireless access (1 MB ADSL) was included. The connection would only allow two computers on the wireless at a time and we had three computers. This meant one connection had to be down while the other two remained online.

Heating The living/dining area had heating provided by the building’s heaters. Bedrooms had wall mounted electric heaters. We were warned repeatedly that if the electric bill was “higher than average” we would be charged for excess electricity; and encouraged to use the heaters sparingly and only at night. The living/dining area would be chilly often. When that happened we would turn on the space heater we purchased. There was no surcharge when we checked out.

Located The apartment is in the fifth arrondissement of Paris near the Sorbonne University, just south of the Seine river and on the edge of the famous Latin Quarter. The nearest metro stations are Luxembourg, St. Michel or Cluny La Sorbonne

Owned Although we were unable to find out who owned the apartment, the Erica Berman, young woman who rented it to us, told us she leased it from the owner.

Description A small two bedroom, one bathroom apartment on the fifth floor of a Left Bank apartment of a 17 century building in Paris. A narrow hallway entrance led a wider hallway and beyond it to the bedrooms on the left. The living and dining area had a khaki colored cloth loveseat (two seats), two yellow cloth armchairs, a metal chest table, a small wood telephone table with a lamp and cordless phone. The area nearest the balcony had a small wood table, lamp and bowl with artificial flowers. A 27” Thomson remote controlled TV with basic cable service sat on a low wood table. An LG DVD player sat on the floor underneath the wood table (to play DVD’s we had to crouch or sit on the floor). Two six-pane double doors with striped cloth curtains led to a slim wrap around balcony. A large window was between the doors; a white Formica dining room table and four small armless chairs (two of yellow cloth and one in leather) were adjacent to the window. Two armchairs filled the space facing the kitchen neighboring three large six-pane double windows. A built-in closet with a cloth curtain in the hallway housed cleaning materials and a vacuum cleaner.

The tiled modern kitchen had an open design blending into the living and dining area. A wood countertop provided an informal eating surface (we noticed folded counter stools by the entrance). There was a double stainless steel sink, refrigerator/freezer (refrigerator on the top and freezer below), electric stovetop and oven with extraction fan, cutlery, glasses, dinnerware, pots and pans and water boiling appliance. There was an antique French butchery/deli sign adorning the wall and a large covered metal garbage can in the center.

Frameless black and grey paintings peppered the walls in various parts of the apartment. An extra large mirror with a wood frame hung in the hallway near the entrance. Another extra large mirror hung in the living room behind the loveseat. We especially liked the charming antique wood floors, vertical wood beams and excellent north facing view including the Cluny Museum, Notre Dame and the Sacre Coeur church in the distance.

Bathroom A pebbled floor gave the bathroom a modern look although it took some getting used to against our bare feet. To one side there were glass twin sinks atop a tile counter. Under the counter we found shelf space housing linen and bathroom supplies and cleaning liquids. A full size porcelain bathtub with double (cloth and plastic) shower curtains housed dual handheld and ceiling showerheads with individual controls. The walls were covered with tiny squares of pale green tiles. A toilet was next to the shower; next to the toilet a washer and a dryer were stacked (dryer was set atop the washer). Although the bathroom had no heater, it was usually comfortable to be in and the water in the shower was quite hot. The water pressure in the shower was excellent although the water sometimes drained slowly. There was a slight odor when we first arrived though it faded after some repairs to the washer and dryer.

Bedrooms The first bedroom had a trundle bed and a built-in closet with a cover in place of a door, a small wood dresser and mirror. The second bedroom had wood floor, a queen bed, a built-in closet with an antique wood door, a small wood table, two lamps and a dresser in the space adjacent to the bathroom, and a recessed light in a cubby hole. Both bedrooms had electric heaters mounted on the wall. There were dressers in the bedrooms and a the second bedroom also had small wood table and upright lamp. There was also a small mirror and two large paintings.

Other Large windows and doors allowed plenty of sunlight to fill the living/dining area. It also meant that part of the apartment was cool or cold when the outdoor temperature dropped. The month long rental included welcome flowers (a small bouquet of roses), a bottle of Bordeaux wine and weekly cleaning service after the first week. The cleaning lady and her husband arrived two out of three times without notice (she had her own key) which was inconvenient.There was a small elevator with space for two large or three smaller people and a narrow wood spiral staircase. More than once one of use took the stairs while the others rode the elevator or we made two elevator trips, especially if we had luggage or heavy groceries.

Dealing with Erica, the American sounding landlady who subleased the apartment from the owner, was pleasant. Her boyfriend, Alain was friendly, polite and very helpful. We were taken aback by the non-fundable deposit, half of the total rental, required to reserve the apartment months ahead of time. The terms of the agreement also required non-refundable full payment, in U.S. dollars thankfully, two months before the rental period. One bad experience had made us skittish and we wondered ever since we prepaid for the entire rental period if everything would be in order when we arrived. Being able to speak with someone who understood English readily and easily was helpful during those times when something went wrong. We were forced to contact Erica and Alain when the washing machine broke down, the dryer broke down or a lamp short circuited and tripped the breaker and each time they responded to the call quickly and efficiently. In the end it all worked out.

Duration Of Stay One month

Would You Stay There Again-Recommend It? Yes 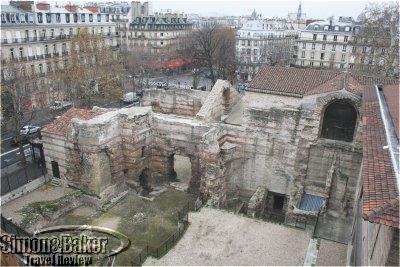 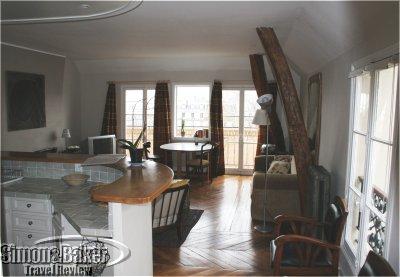 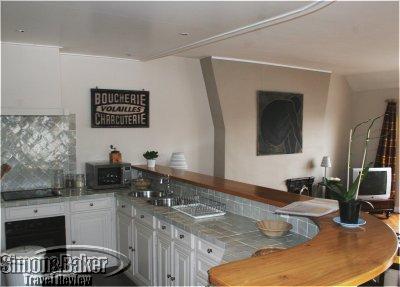 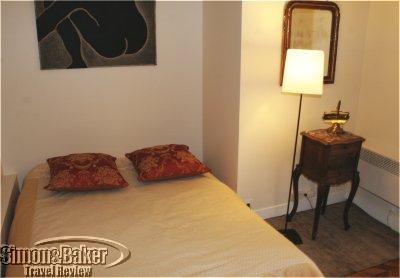