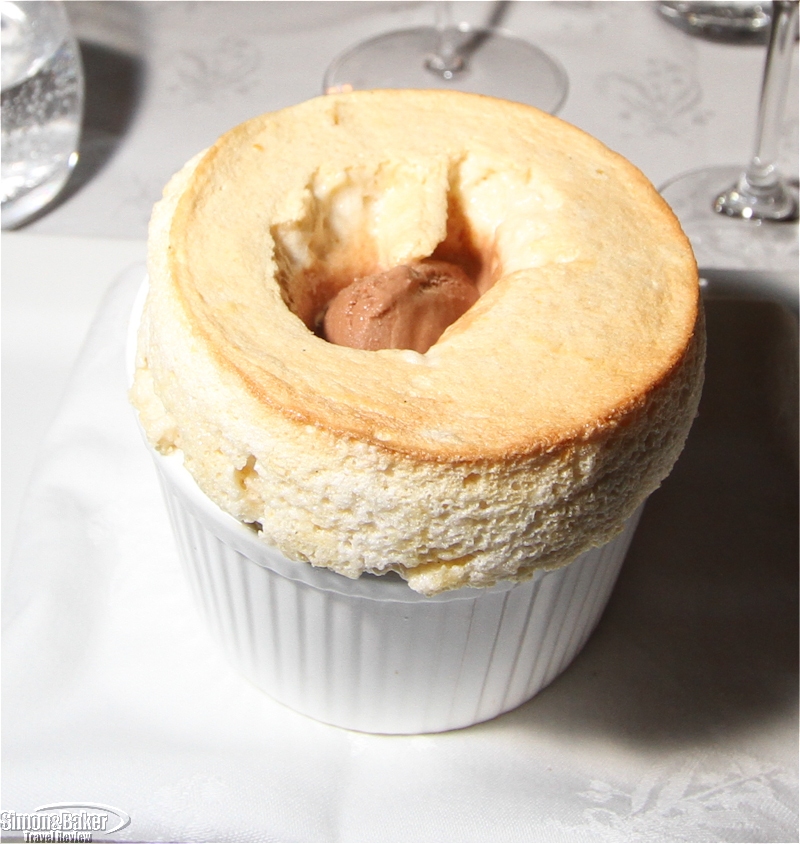 A combination of a romantic setting in a historic building said to be haunted, panoramic ocean and mountain sunset views, attentive and efficient service, a location within easy reach of the city center and a refined well prepared and well presented meal with wine pairing contributed to the overall outstanding experience.


Overall Impression As we sat on the lawn in front of the gourmet restaurant looking out onto Camps Bay with glasses of chilled South African bubbly in hand we realized what a special evening was unfolding. We were surrounded by a dozen or so tables of couples, families and groups, each absorbed in their conversation while the gentle light of the waning sun, all that remained of a sunny and hot Cape Town day, dimmed slowly. A handsome man wearing a dark suit, a bright pink tie and a radiant smile had welcomed us when we arrived and escorted us to our aperitif spot a short distance from the restaurant door. Just as we were thinking about food he reappeared to escort us to our indoor table at The Roundhouse.

For dinner we sat in front of an open window, still facing Camps Bay in the dark of early evening, in a cozy open air dining room with white ceilings, wood floors, and ceiling fans enveloped by the soft sounds of conversations at neighboring tables. A gas lamp at our table was a gentle reminder of the building’s historic status (we saw nothing of the resident ghost).

A pleasant team of efficient, polite, and well trained Zimbabwean staff looked after us with evident pride in their work. From the hot out of the oven bread at the start to the lighter than air chocolate and mango souffle dessert and cheese platter the meal was a delight. We said as much to relief executive chef PJ Vadas, who we had met on our first visit, when he made the rounds of the dining room, greeting guests warmly.

Dinner at The Roundhouse was one of the highlights of our most recent trip to South Africa. A combination of a romantic setting in a historic building said to be haunted, panoramic ocean and mountain sunset views, attentive and efficient service, a location within easy reach of the city center and a refined well prepared and well presented meal with wine pairing contributed to the overall outstanding experience.

About The Executive Chef Eric Bulpitt joined The Roundhouse in March 2011. Classically trained, he worked for many years in South African restaurants The Showroom and Jardine under George Jardine. He spent time in London at The Leadbury in Notting Hill and Trinity Restaurant in Clapham Common and worked briefly at Noma and Nimb in Copenhagen, Denmark.

Established Although the restaurant was in a historic building dating back to 1786, it opened as a restaurant June 2008.

Location The restaurant is 4.9 kilometers from central Cape Town

Managing Director And Relief Chef PJ Vadas. Prior to joining The Roundhouse, PJ Vadas worked in the following kitchens: Roger Verge in France, Connaught Hotel in London under Angela Hartnett, The Cape Grace in Cape Town, Gordon Ramsay in New York and The Vineyard in Newbury.

Size The 140 square meter restaurant, situated on a 42-hectare lot, could accommodate 60 guests and employed 50 staff.

DÉCor-Ambiance The interior was meant to be “reserved and stately,” remaining true to the original design of the period. There were classic period riempie chairs, original artworks by Fiona Rowett to provide a splash of color, and bespoke ceramic side plates ceramics by John Bauer. The Somerset Room main dining room had expansive views of Camps Bay. Because the back of my chair was uncomfortable I requested a cushion which the staff provided quickly. It alleviated the problem. The dinnerware was distinct for each dish. For example, the cob was served on a white ceramic plate and the salmon trout was served on a black ceramic plate.
Special Menus The following were available: A four course Brandy Pairing Menu for 450 rand, a six course Tasting Menu for 595 rand, a four course A la Carte option for 450 rand, and a four course Vegetarian Menu for 450 rand. The menus were available with wine pairing at an additional charge.

Wine And Alcoholic Beverages The restaurant had an extensive South Africa wine collection. The head sommelier set out to provide beverages as an addition to the dining experience and an experience in their own right. Staff strived to provide guests with wines “that are balanced, both in terms of harmonious flavours and in terms of sustainable practices. As with our cuisine, locality is an underlying principle.”

The Roundhouse had a wine list focused on terroir, balance, and a strong emphasis on organic and biodynamic practices. The wine list had been structured according to an appellation system, the South African Wine of Origin System, and was under constant development. Wines that did not have South African equivalents were also included. The restaurant had a collection of 130 whiskies. There were international still and sparkling wines on offer as well.

Meal Our meal began with a bread board, a small serving of hummus (with bold cumin and lemon flavors we enjoyed) and sea salt. While we munched on hot bread with butter we admired the whimsical ceramic bread plates.

We had a five course menu with wine pairing beginning with pretty to look at and flavorful dishes: Organic vegetable patch, raw and pickled with mushroom soil and herb emulsion served with 2010 Hermanuspietersfontain savingon blanc No 5 for my dinner companion and a rich White bean veloute with sourdough, chicken and carmelised pear with 2009 Graham Beck Bowed Head chenin blanc for me.

Next there was perfectly cooked and tasty fish for both of us, a Farmed cob with sea lettuce, pickled mussels and beurre noisette emulsion with 2010 Bouchard Finlayson Sans Barrique chardonnay for my dinner companion and an Olive oil-poached salmon trout with charred peaches, cucumber, kohlrabi and ponzu served with 2010 Zorgvliet Five-Thirty-Five for me. Next, we both had outstanding Celeriac roasted in goat’s butter, juniper puree, cider fermented apple and hazelnut milk. The dish offered a good combination of tangy, nutty and cheesy flavors.

For pre-dessert the chef sent out citrus sorbet over chocolate crumbles. For dessert there was Mango soufflé with milk chocolate ice cream served with Juice Box Peach Juice with non vintage Graham Beck for my dinner companion and a cheese platter selection of three Western Cape cheeses with 2009 Ken Forrester “T” NLH for me.

Other The building, a National Heritage and Monument Building, is situated on 40 acres of South African National Park. In the 1800s the building served as the hunting lodge of Lord Charles Somerset. The Roundhouse had been awarded three stars over the previous three years in the Rossouw Guide, ranked fourth best in the South African Eat Out Top 10 in November 2011.
Date Of Review March 2012 and March 2008

Service The staff members that looked after us, although intent on their work and busy with a full dining room, were helpful, knowledgeable, attentive without ever being intrusive and discreetly friendly. They were Clifford, Collins, Eden, Nyasha, and Sherwin. It was a seamless meal. 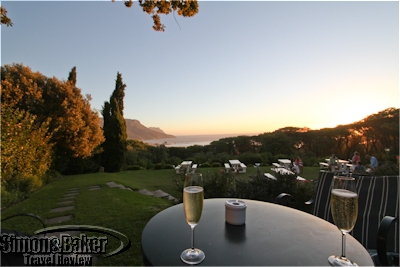 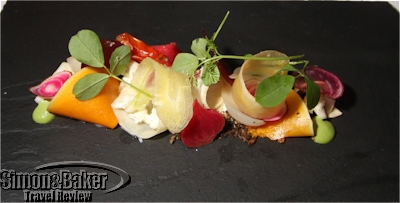 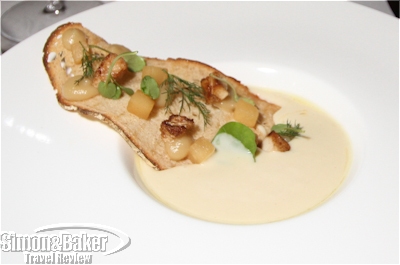 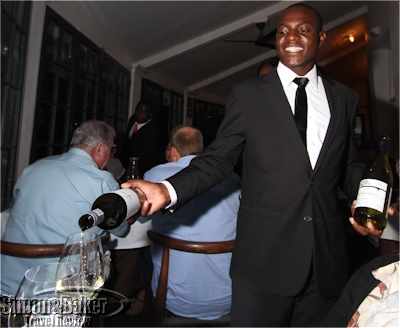 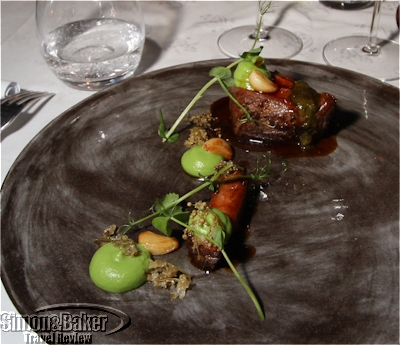 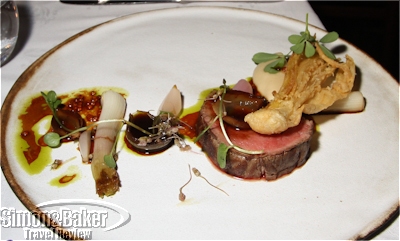 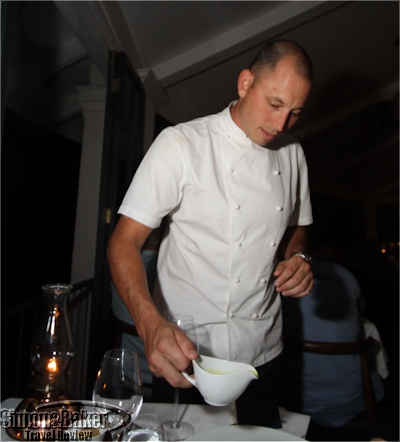 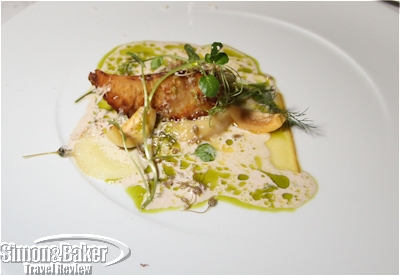 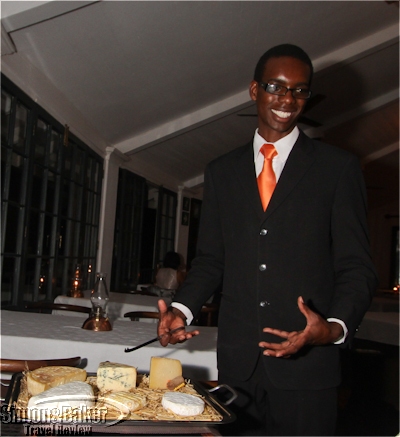 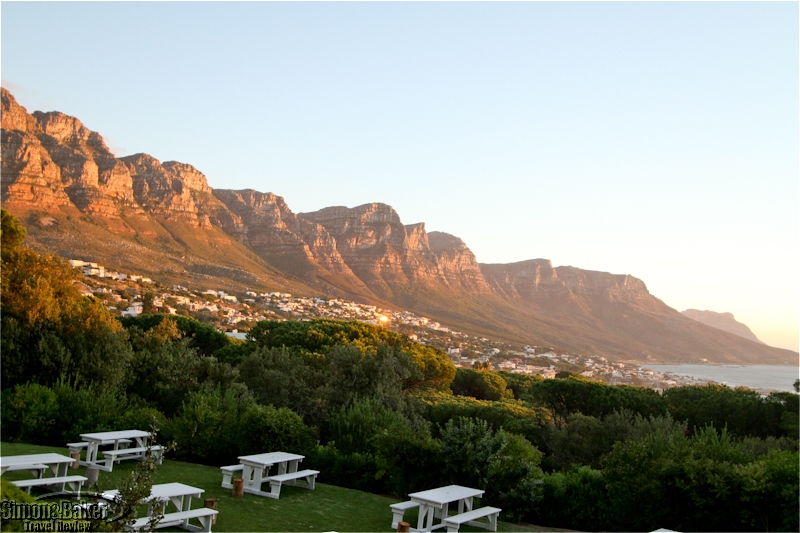