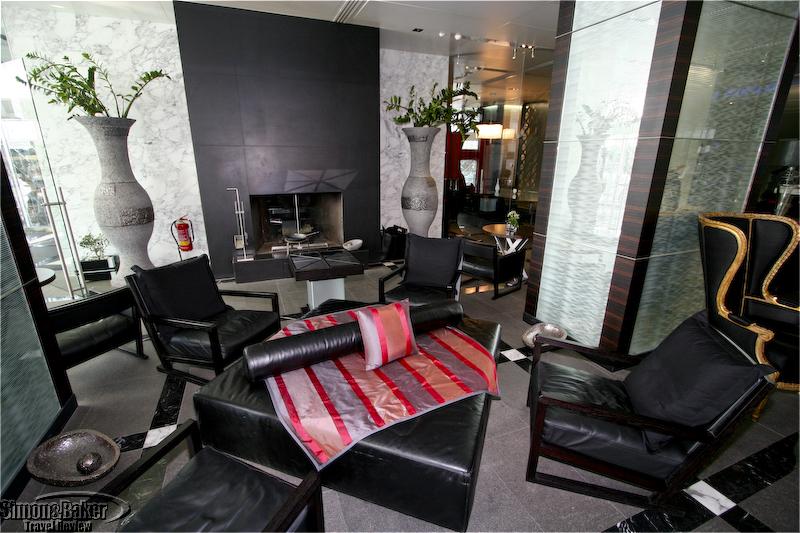 We look forward to returning to the hotel to experience it post renovations and to further discover the city.


Overall Impression Our first impression of the Romeo Hotel was in an unexpected venue. As we exited our high speed train from Rome we met Antonio Deperte, the newly appointed general manager of the hotel who had volunteered to pick us up at the train and personally introduce us to the much maligned Italian city. His warm greeting, in American English, and the short drive from the station to the hotel in a vintage Jaguar together set the tone for our lovely two-night stay at the art filled property.

This 84-room boutique hotel across the street from the Port of Naples in Italy had many outstanding features. The architectural style, a blend of modern Japan meets Southern Italy, was distinctive and memorable. A myriad touches set the hotel apart from the usual chain hotels and garden variety independently owned properties. It was clear the owner of the hotel and his staff were striving for excellence. From the leather electronic key holder to the custom designed toiletries bottles, iPod nano with speakers and preloaded music, original artwork and distinctive elevators there was frequently something unexpected to be found within the hotel.

Although the Romeo Hotel was undergoing renovations when we were there causing the temporary relocation of its restaurants and the closure of the spa and pool, we especially enjoyed our stay there. We liked our spacious corner suite with a view of the sea and the port, scented toiletries, modern features and Japanese influence, lovingly decorated and assembled artwork scattered throughout the property, efficient and service oriented staff, and the excellent in-house sushi and gourmet restaurants. We were particularly impressed with Andrea Aprea’s elegant and delicious yet distinctively Neapolitan tasting menu.

An outstanding hotel is more than bricks and mortar. It is also the quality, interest and dedication of its owners and staff. This was the case with the Romeo. Thanks in great part to the staff’s efforts and recommendations we discovered a little of the city on foot and by car. We look forward to returning to the hotel to experience it post renovations and to further discover the city.

Children The hotel welcomed children of all ages

Connectivity There was complimentary WiFi access in our suite. The connection worked well.

Handicapped Access The property had designated rooms and toilettes for wheelchair bound guests and an amplifier system for hearing impaired visitors in the meeting rooms.

Location Across the street from the Port of Naples.

Size There were 84 rooms and 58 employees in the ten-floor hotel.

Year Opened-Renovated The hotel opened December 2008 and was undergoing major renovations during our visit.

Lobby And Common Areas The hotel, designed by Kenzo Tange and Associates of Tokyo, was styled to be the union between contemporary Japanese and Italian design. The Hotel Romeo was built on the abandoned shell of the former headquarters of the cruise line Flotta Lauro, built in the 1950s and considered by some one of the first modern buildings of Naples at the time. The building’s original glass façade was easily recognized and made the property well known to the public.

In the hotel, Tange Associates sought to acknowledge the importance of the respected building while designing a concept in homage to the former Palazzo Lauro. Part of the idea was to incorporate the obvious connection between the building and the sea in an updated design.

The interior was designed to be open and contemporary while emphasizing the human scale. There were walls of Macassar ebony and art features throughout. The Japanese architects set out to create an open plan to maximize space in the hotel rooms. The bathrooms too were open although they included sliding partitions for privacy when required. The furnishings were by B&B Italia, an Italian modern furniture manufacturer.

Bathroom There was a half bathroom (toilet, sink and bidet) next to the entrance and an en suite bathroom in the bedroom with a glass sink, bidet, toilet. A glass door led to a second area within the bathroom that housed a doorless shower and an oval plastic bathtub. Sunlight came in through a rectangular window, behind the bathtub, that faced the street (because of the positioning there was privacy).
Room We stayed in a 72 square meter suite, Romeo Bay View Suite 702, a bay facing corner contemporary style suite on the seventh floor with a view of the Port of Naples and its environs. An electronic key opened the door leading to a small foyer with a mirrored door closet with an electronic safe within.There was a guest bathroom on the opposite side of the foyer. Designed in a Japanese style with wood veneer flooring, accents and walls the suite was divided into two main areas, a living area and a sleeping area. The living area had a pine wood veneer partial ceiling and middle section. Against the far wall there was a lime green sectional sofa. The middle of the room was taken up by a coffee table. A flat screen television hung across from the sofa. In the corner nearest the entrance there was a desk with a Sony computer with flat screen, Bang & Olufsen hand held phone and fax machine. Nearby and built into the wall there was space for a Nespresso machine and underneath it there was a mini bar with a refrigerator. A mirrored door on the right and a glass door on the left led to the sleeping area of the room.

To the right of the sleeping area there was a walk-in closet with luggage racks,hanging space and a desk with an armless chair. In the room, against the wall, there was a glass cabinet. A comfortable and extra large single mattress bed set against a small green headboard occupied the center of the room facing a flat screen television. A wood panel identical to the one in the living area ran behind and above the bed about two thirds into the room. There were matching wood veneer night tables. One had a Bang & Olufsen wired phone and the other one had a tray with a bottle of water and an iPod Romeo nano with house loaded music and a remote control with speaker. Two lime green armchairs stood against the other side of the room, adjacent to the floor to ceiling windows facing Cristoforo Columbus street and the port. A floor to ceiling mirror ran the length of a column on one side of the room. There were three Bang & Olufsen phones in the room: a wireless handheld one on the desk, a wired unit on the night table and a wall unit in the master bathroom.

To manage the strong sunlight there were floor to ceiling double curtains in hunter green, thin veneer curtains and wood shutters. Wood and glass frames enveloped original art on the walls. Temperature control was through digital wall displays. Glass and metal lamps stood upright and hung from the ceiling. There were also recessed lights. Additional contemporary features were volcanic stone planters and a “broken glass” table that held the television in the living area. The television in the bedroom hung from a wood veneer fixture above a small black table. Lights were motion activated. At our request, a maintenance staff person adjusted the controls allowing us the additional option of manual control of the lights.

Facilities There were two restaurants (Il Comandante and Zero Sushi Bar), a cigar room, and Cristallo Bar, a snack bar. The spa which was being rebuilt during our visit was due to open in Autumn 2010.

Other The hotel was in the 2010 Condé Nast Traveller Hot List. 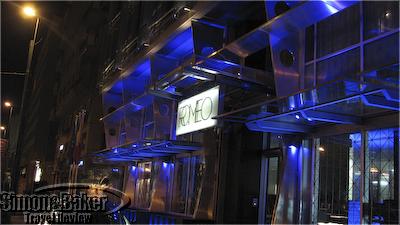 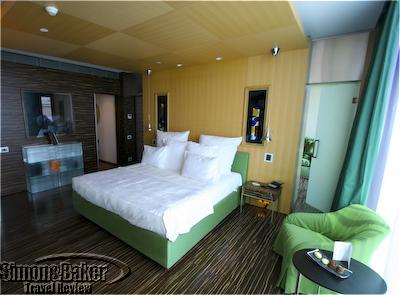 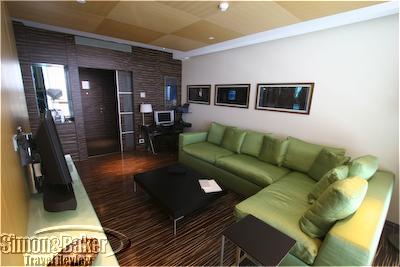 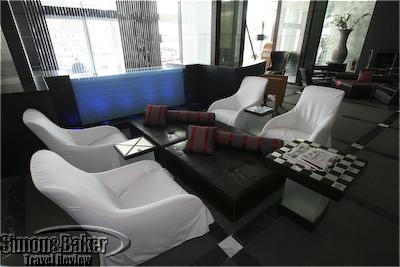 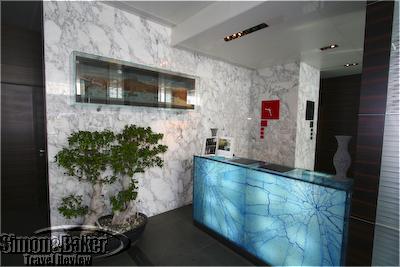 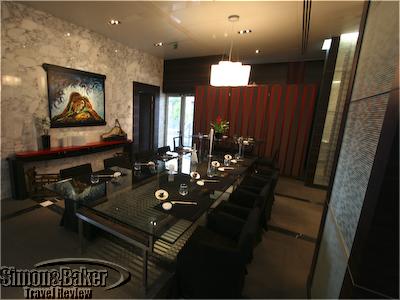 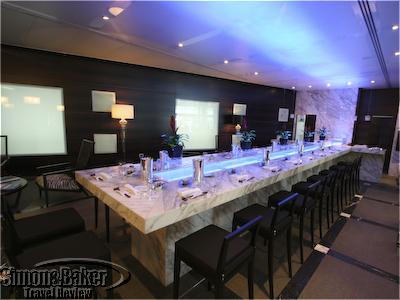 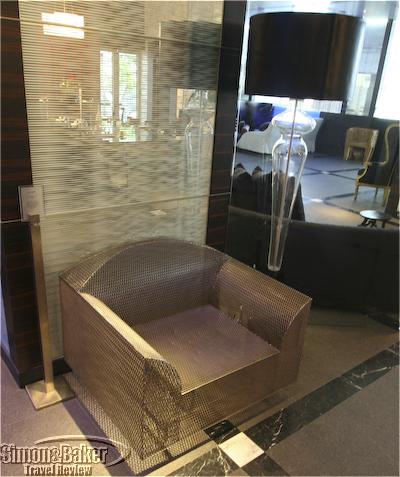 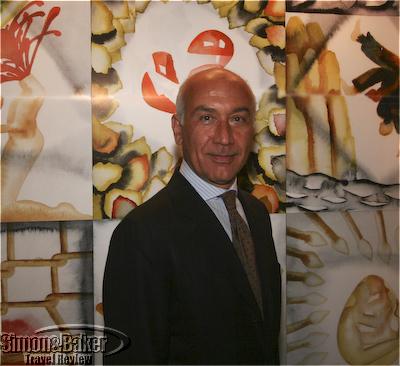 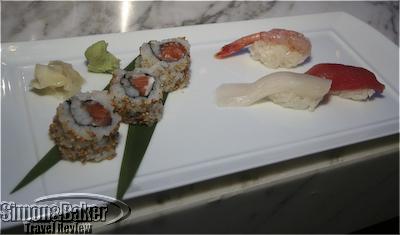 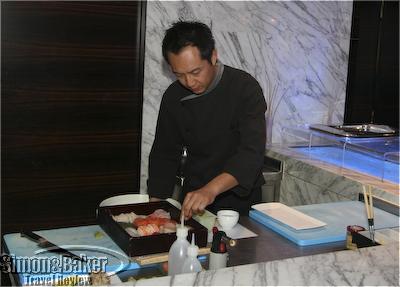 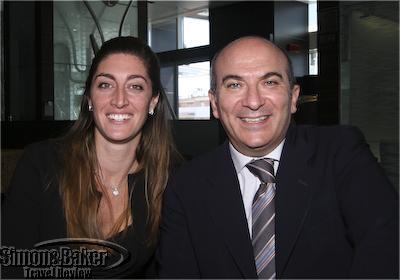