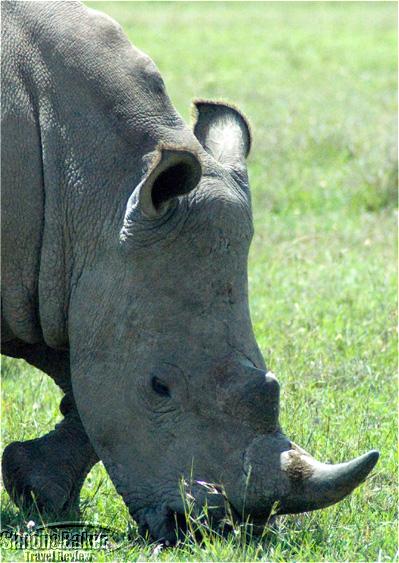 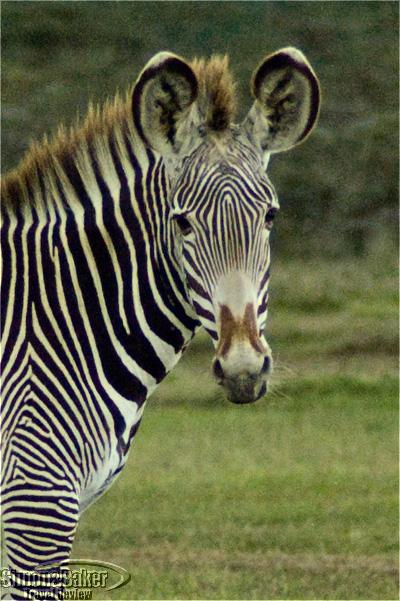 This combination of outstanding wildlife and stunning views across the open plateau of Ol Pejeta and the surrounding mountains made for a unique safari experience that I will treasure and recommend to friends looking to venture out of the usual safari circuits.


Overall Impression Porini Rhino Camp was located within the 90,000 acre (365 square kilometer) Ol Pejeta Conservancy, on a verdant plateau between the foothills of the Aberdares Range and the stately snow-capped peak of Mount Kenya. Although the area was on the equator, the altitude (around 6,500 feet or 2,000 meters) made for a temperate climate with cool nights, and a landscape of wooded grassland reminiscent of alpine pastures. However, there was nothing alpine about the fauna; game viewing was some of the best East Africa had to offer both in density and variety. Within minutes of entering the conservancy, I had sighted a white rhino, followed in short order by a large journey of reticulated giraffes.

The flight from Nairobi to the nearby Nanyuki Airstrip had been delayed so that it was mid-afternoon by the time we reached the camp and the sky was overcast. But the welcome from camp manager Paul Magiri and the Samburu staff couldn’t have been sunnier or more thoughtful. Both lunch and bush shower were ready to accommodate either of my preferences. My spacious tent, a comfortably furnished room and bathroom, faced a rolling meadow dotted with trees, where gazelles liked to browse.

While the quality of the accommodations and the friendliness of the well-trained staff made for a most enjoyable visit, what made the Porini Rhino Camp unique was… the rhinos! The Ol Pejeta Conservancy was home to the endangered black and white rhinos. Following a successful black rhino translocation in 2007 from Solio Rhino Sanctuary (in the north east of the Aberdare Mountain Range), Ol Pejeta Conservancy, with 78 animals, became one of the largest black rhino sanctuaries in East Africa. Every daytime game drive during my stay brought one or more rhinos sightings often at close range, the most memorable ones a charging male black rhino and sometime later a mating pair of white rhinos. Other rare species I enjoyed seeing at the conservancy were Grevy’s zebra (the largest, wildest and most untamable of the three zebra species in Africa) and Jackson’s hartebeest. Additionally, the conservancy was home to the Sweetwaters Chimpanzee Sanctuary, possibly the only place in Kenya where this highly endangered species can be seen. Open in 1993, Sweetwater provided long-time refuge to 43 chimpanzees evacuated from their Central and West African countries of origin due to civil wars.

This combination of outstanding wildlife and stunning views across the open plateau of Ol Pejeta and the surrounding mountains made for a unique safari experience that I will treasure and recommend to friends looking to venture out of the usual safari circuits.

Location At the equator in central Kenya, northwest of Mount Kenya, one hour’s drive from Nanuyki, the capital of Laikipia East District, 120 miles (190 kilometers) north of Nairobi.

Size The eight acre (three-and-a-quarter hectare) camp consisted of six guest tents capable of accommodating up to 12 guests. It employed a staff of 18, including two guides and two spotters.

Lobby And Common Areas The common tent was a combination lounge and dining area. Two long wooden tables surrounded by ladder back wooden chairs occupied the rear of the tent. In the front, the seating area was furnished with a rough-hewn wooden sofa and three armchairs with tangerine-colored canvas cushions arranged around a large square wooden coffee table. The front of the tent opened onto a deep verandah with a sofa and two armchairs matching the interior sitting room. Indoor lighting was produced through solar electricity.
Bathroom The bathroom occupied the far quarter of the tent. The white porcelain sink was set in the wooden countertop of the vanity, topped by a square mirror. The flush commode occupied one rear corner of the bathroom, with the opposite corner filled by a large shower with canvas walls and curtain. There was cold running water in the sink. Hot water was delivered on demand for the bush shower in a canvas bucket hanging above the tent. A tall towel rack sat next to the shower. It held two each oversized white bath towels, face towels and face cloths.

Room My 390 square foot tent (36 square meters), Number Five, sat on a ground-level wooden platform covered with weatherproof floor matting. The floor platform extended the length of the tent to form an outside deck shaded by a canvas awning and furnished with two canvas chairs and a small wood table. The tent entrance was a zippered “door” in the center of the front panel. Side walls were zip-up flaps over netting-covered “windows”. Inside, one queen-size and one double bed with wooden headboards, each with their own bedside table and reading lamp occupied one side of the tent. Indoor lighting was produced through solar electricity. A partition at the far end of the tent separated the sleeping room from the bathroom. A writing desk with a canvas armchair sat on one side of the central curtained doorway, while an open-front armoire with storage shelves and a clothes-hanging rod occupied the other side. Blue and white striped cotton bedside rugs completed the décor.

Food The food was plentiful and wholesome. A choice of continental or full English breakfast was prepared and served on demand. Lunch was buffet-style and included an assortment of salads, savory pies, cold meats, fruit and cheeses. Dinner was plated and formally served. It started each night with a delicious homemade soup, followed by a roast meat main course and tempting desserts such as chocolate cake with crème Anglaise . All baked goods came fresh from the kitchen’s brick oven.
Amenities All game watching activities, meals, soft drinks, water, coffee, tea as well as a limited selection of alcoholic beverages were included in the nightly rate. Alcoholic beverages available at the camp were house wines, beer and gin. The morning wake-up call offered tea or coffee and freshly baked cookies delivered to the tent. Bathroom amenities included hand-made natural bath soap, a pump bottle of body lotion and a ceramic container of soap powder for personal laundry. Bottled water was provided for oral hygiene and drinking. A basket held spray cans of room and body mosquito repellent. Evening turndown service included a hot water bottle slipped in the bed to ward off the nighttime mountain chill.
Game Viewing All game drives took place in one of the two canvas-topped, open-sided custom Land Rovers, each fitted with three tiers of two individual seats. Although the vehicles could seat six guests, there were never more that four of us in my vehicle. Game viewing was bountiful and varied; and with over 500 species of birds records here, so was bird watching. My Masai guide, Daniel Mamai and spotter Benjamin were remarkably knowledgeable and patient, making every game drive a uniquely rewarding experience

Activities Morning, sundowner and evening game drives, nature walks with Samburu warriors and visits to the Sweetwaters Chimpanzee Sanctuary were available.
Other Because of the proximity to wild game, children had to be at least nine year old to to stay at the camp.

Porini Rhino Camp was run and maintained according to strict responsible tourism guidelines regarding conservation of the environment (including use of natural resources and solid waste and sewerage disposal) as well as providing development opportunities for the local community. At the time of my visit, 90 percent of the staff was from the local Masai Samburu community. All meat products were supplied by the cattle ranch on the Conservancy grounds and produce was sourced from local farmers.

Shortly after my visit, Porini Safari Camps and its parent company Gamewatchers Safaris were honored with the Responsible Tourism Award for “Best for Conservation of Endangered Species outside Protected Area” at the World Travel Market in London. The award, sponsored by Virgin Holidays, recognized Porini and Gamewatchers “for demonstrating that a high revenue, low impact tourism development approach can benefit the local Maasai through developing conservancies and tourism in partnership with safari companies to create employment and community income and to conserve their land for wildlife.”

Service My tent was serviced twice daily, a morning cleaning and evening turn down service . Every member of the staff I encountered was consistently attentive, friendly, helpful and professional. 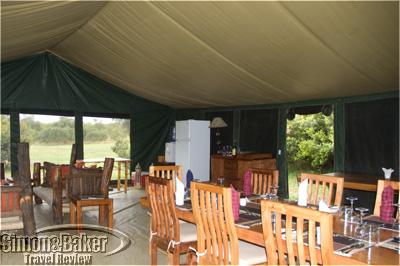 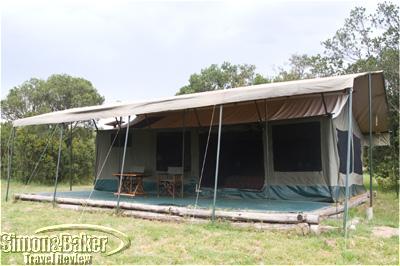 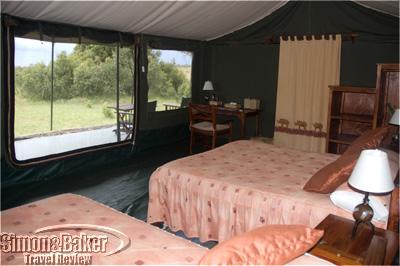 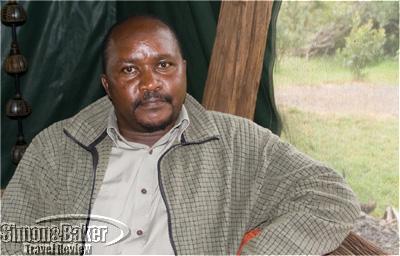 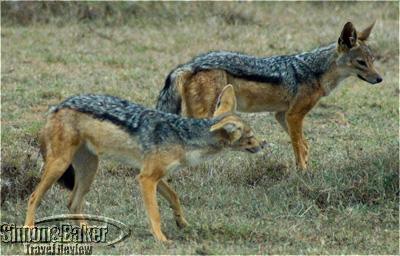