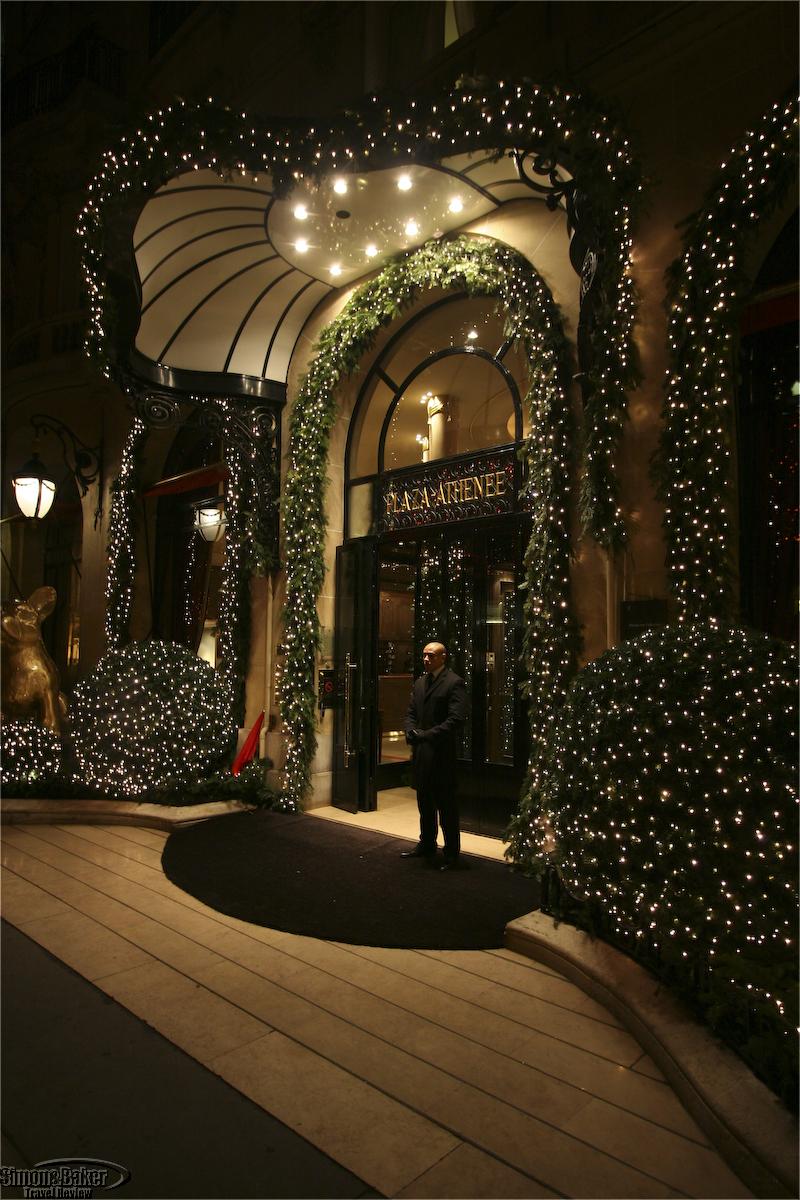 
Overall impression As in past trips to Paris we were looking forward to visiting the Restaurant Alain Ducasse au Plaza Athénée. This time was particularly convenient as we were staying a block away. A few minutes before our 8 p.m. dinner reservations we enjoyed a leisurely stroll to the Plaza Athénée hotel. It was a chilly winter night and a cold breeze brought with it thin beautiful snow flakes. Most disappeared, melting before they hit the ground.

Moments later we were seated midway into the restaurant on the left side sipping chilled bubbly and pondering options for dinner. In the end we left the decisions in the hands of the experts and settled back to enjoy the experience. There were familiar dishes which we savored trying to remember if they tasted the same way as the last time; and there were new dishes which we tasted with curiosity, seeking out the individual flavors.

Every dish was delicious and beautifully presented with flair and a bit of showmanship. The service was outstanding and the overall experience in the bustling restaurant with not a seat to spare worth repeating. As in past visits it was the ensemble of the experience that left us satisfied and will draw us back in the future.

About The Chef Christophe Saintagne, originally from Normandy, trained at the Auberge du Vieux Logis in Conteville working with Guillaume Louet. In 1998, he joined Philippe Groult at the Amphyclés restaurant in Paris, France. After doing his national service at the presidential residence, the Elysée Palace, in 1999, he joined the kitchen staff in Alain Ducasse’ restaurant, first at 59 Poincaré then at the Plaza Athénée. In 2002, he became head chef at the restaurant Aux Lyonnais in Paris. In 2005, he became assistant to Jean-François Piège, the chef at the Hôtel de Crillon and its gourmet restaurant. In 2008, he began to work with Alain Ducasse, helping with the supervision of the well known chef’s restaurants in France, Japan and the United Kingdom. He also contributed to Nature, Simple, Healthy and Good , a book published in October 2009.

About The Executive Chef At 16 Alain Ducasse began a two year culinary apprenticeship at a restaurant in Eugénie-les-Bains. Later on he went to Moulin de Mougins and Mionnay. By 1980 he was chef a L’Amandier. From there he went to La Terrasse at the Hôtel Juana in Juan-les-Pins. After much success at Le Louis XV in Monaco, he opened restaurants in Paris and later New York and London. In 2007, he took over the Jules Verne, the restaurant in the iconic Eiffel Tower. His company manages 27 restaurants in eight countries.

Managed Hotel Plaza Athénée, a member of the Dorchester Group

Size The dining room occupied 200 square meters of space in which 50 guests could be seated. There was a staff of 50.

Year Opened-Renovated The restaurant opened in 2000 and the most recent renovation was in 2010.

Style Of DÉCor While subtle and elegant the dining room was large and impressive. To enter the dining room we passed through engraved glass doors. The phrase ” on lute, on ficelle, on assemble, on concasse, on hache, on émince, on pane, on évide … ” (“We seal in, tie up, mix, crush, chop, mince, coat, scoop out…”), was inscribed on an immense pillar in the entranceway.

The interior décor of the dining room, classic with modern accents, was designed by Patrick Jouin. The most recent update to the décor, so discreet we didn’t notice it right away, took place in 2010. There were four new large ebroidered screens representing garlic, mushroom, artichoke, and lettuce placed intermittently through the dining room.

Patrick Jouin also designed three sculptural delftware logs, created by Jean- Philippe Hazard, a Parisian specializing in model building. The “logs” are lit by various colored lights diffused by a projector concealed up in the flue. The reflections on the logs were created as a subtle suggestion of the idea of fire by Enzyme Design.

The Corian seats were comfortable and came with a built in place for a small bag which we both took advantage of. There was a wood framed decorative fireplace across the room from the entrance and a striking light feature hanging from the ceiling in an archipelago of crystal drops, our favorite decorative touch in the restaurant. Swiss chard was the single decoration on our table in addition to the art as dinnerware, silverware, and glassware of the meal service.

Our napkins were of crispy linen. Whenever the staff handled our napkins, if we stepped away from the table for example, they wore white gloves to do so.

The dessert service and “volute” plates are original designs by Pierre Tachon, made by porcelain manufacturer JL Coquet. The glasses were by MD crystal, 19 th century “Monthélie” cutlery was by Puiforcat, plates by Bernardaud and crystal sundae dishes by Saint-Louis.

The graphic designs were by Philippe David, china was by Jaune de Chrome, glassware by Riedel, flatware by Christofle and Béard, curtains by Edmond Petit, carpets by Andrew Hartley (Hartley of Paris), lighting by Ets Panavision, and the chandeliers, were by Swarovski.

Menu There was a seasonal Menu Collection which consisted of four specialty dishes, cheeses and dessert for 360€.

Wine And Spirits Details There was a Wine and Women collection designed to highlight the production of women vineyard owners, winegrowers and vinification managers. The collection was the brainchild of Gérard Margeon, executive head sommelier with Alain Ducasse.

The restaurant boasted a modern wine list with selections from 1,000 French vineyards and an inventory of 35,000 bottles. There were three choices at dinner and two choices at lunch of champagne by the glass.

Dinner began with a glass of well chilled 1996 Champagne Gosset grand rosé. A moment later the staff brought a few bites for us to taste. One of the servers brought a clipped paper wrapper which she unclipped at the table. Inside there was a small bite to stimulate our appetite. We were served sea bass tartare with lime; and bacon on another toast. In case we wanted to add condiments to our meal there was sea salt, pepper and paprika in individual containers on the table. For bread options there were traditional, rye and baguette breads. The traditional bread was like a miniature wall on the bread cart; it had a rich smokey flavor that hinted of bacon in our palates.

Our first course, Crevettes arrived next. Tiny shrimp arrived in a hot skillet with individual skewers for us to nibble on. They were served with toast and two types of butter, salted and unsalted. There were two types of shrimp in the skillet, crunchy and not crunchy, and we enjoyed both thoroughly. Next was a langoustine tartare gelee with caviar. The combination of flavors had a lovely zip and the hint of ginger was palate cleansing. An Alain Ducasse crock pot cooked crayfish with vegetables was next. The staff, donning white gloves, shaved apple over it after serving it at the table. Although the crayfish was a bit chewy the sauce was light yet “meaty” and simply delicious. The Alsatian wine had a lovely nose and was a good match for the seafood dish.

We were delighted when the white truffle dish arrived. What is there not to like about the inebriating aroma of the famed truffles? Although the chef was new the dish was an old favorite. The well prepared bird was the ideal carrier for the sauce and white truffles from Italy’s town of Alba. It was served with vegetables, asparagus, foie gras and chicken legs.

The cheeses (fourme d’Ambert, munster with cumin, Brie, Camembert) were served with a side salad with truffle shavings and nut and raisin bread.

Although our appetite was definitely waning dessert lovers that we are we had saved space. Before long gold toned silverware arrived as did macaron and Gavote pastries. The staff brought a refreshing and surprisingly flavorful pistachio ice dish followed by a mildly flavored hazelnut souffle. A moment later a plate of hazelnut filled chocolates and chocolate truffles (the best chocolate truffles we had that trip in Paris) arrived. My partner had an espresso and I ordered a fresh spearmint tea from the herb cart. Other selections from the cart included thyme, rosemary, sage and lemongrass.

The candy cart is a favorite at Alain Ducasse. It seems not possible to eat any more by the time we arrive at the candy cart but somehow we indulge. There were three types of caramels, passion fruit, salted caramel and pistachio. There were also chartreuse and orange blossom marshmallows and several fruit paste candies. I sampled the pear.

Service The service was outstanding. Staff members, many of them English speaking, were welcoming and efficient although they looked very busy. They translated the French menu with fluid ease and responded to our questions pleasantly. When I got up to visit the restroom, one of the servers on seeing me escorted me to the restaurant door and pointed to the area I sought. I found a fresh napkin on my return. A third napkin arrived with dessert. Julian, a young sommelier, was pleasant and shared suggestions during the cheese course selection. Alizee, one of the staff who looked after us, had a warm demeanour. 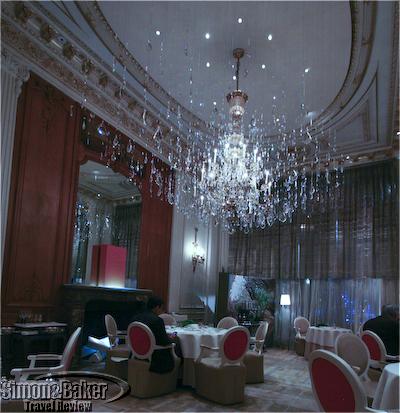 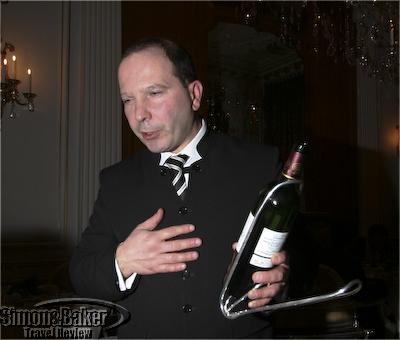 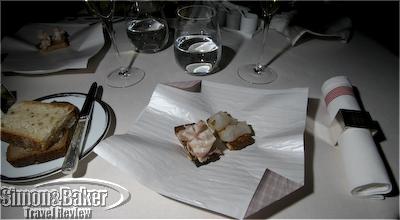 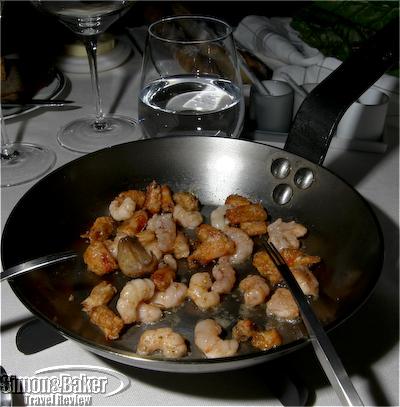 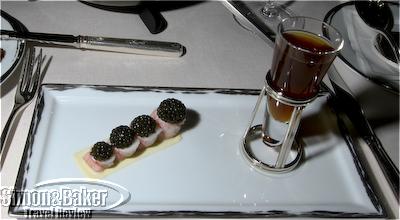 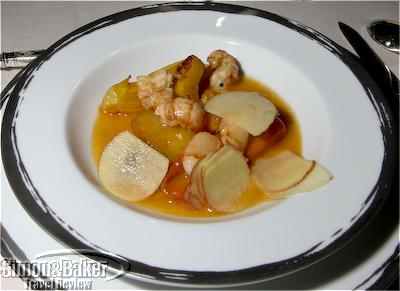 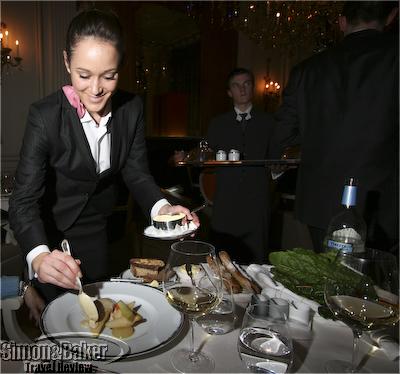 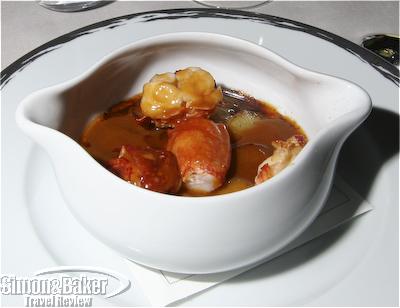 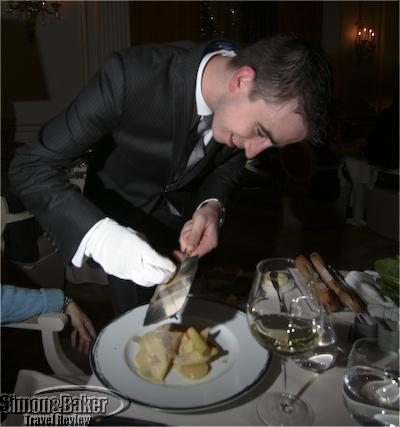 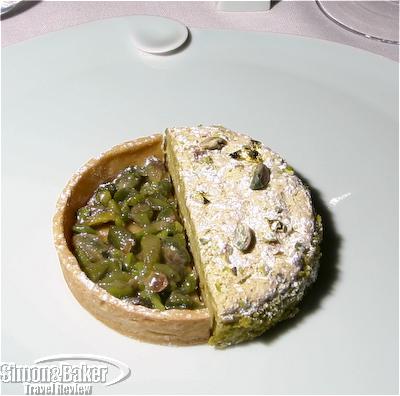