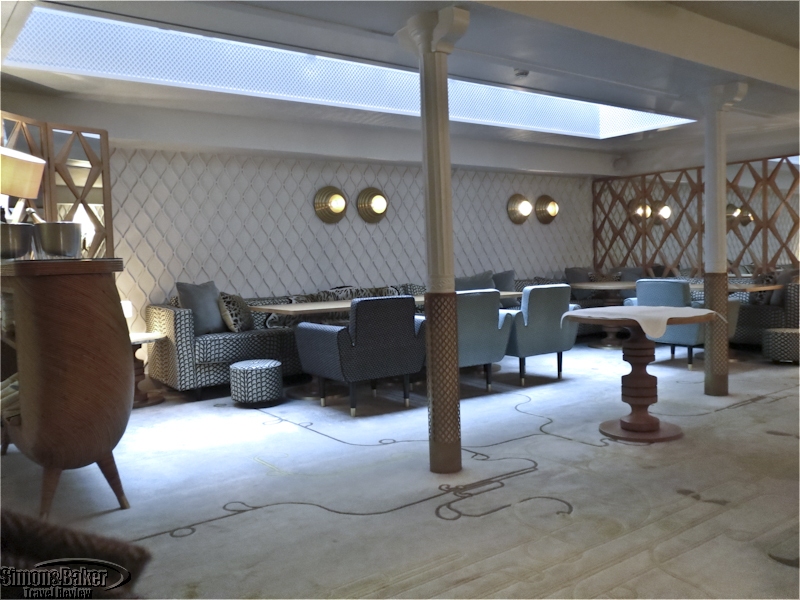 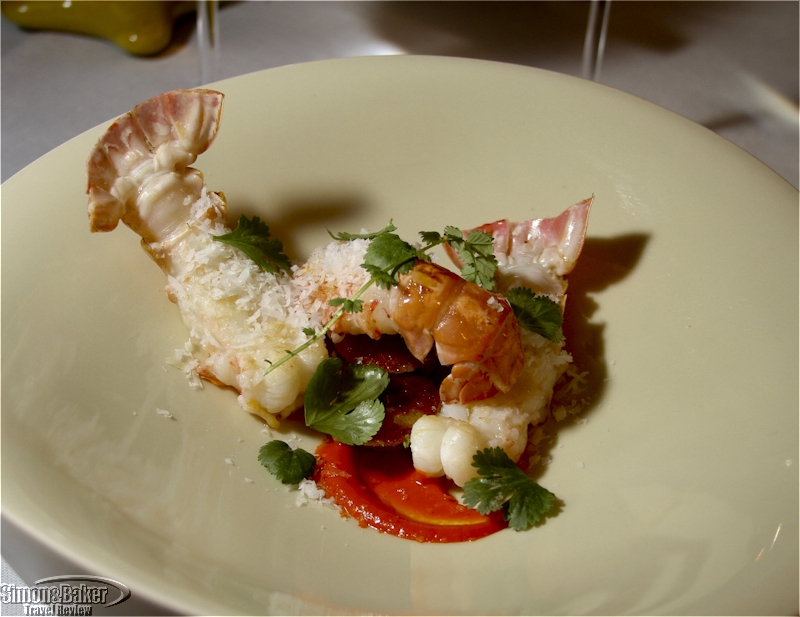 A pretty dinner service, a lengthy wine menu with many biodynamic wines and English speaking staff enriched the experience.

The ambiance was reminiscent of dining at the home of an acquaintance who happened to be a gourmet food lover. Each course was a mini world unto itself.

There was an underlying playfulness to the concept that gave us the impression someone in the kitchen was having fun creating the dishes and sharing them with us. A pretty dinner service, a lengthy wine menu with many biodynamic wines and English speaking staff enriched the experience.

About The Executive Chef When he was 23 years old Marc Favier began working at the Hotel de Crillon as an assistant. Later he became half chef de partie, chef de partie, and second junior. Eventually he joined the Restaurant Jean-François Piège in his current job.

Handicapped Access No, although a spokesperson indicated the restaurant can welcome a handicapped chair.

Location In the lobby level of Thoumieux hotel

Opened-Renovated The restaurant opened in 2010

Size The 50 square meter restaurant employed a staff of 13 and was able to accommodate 18 guests.

DÉCor-Ambiance The small dining room was cozy and intimate with an informal retro style and a distant view of an open kitchen. Jean-François Piège believes “that today’s customers are looking for spontaneity and relaxation; far removed from the stilted atmosphere of days gone by.”

Architect India Mahdavi set to create depth and clarity with subtle plays on dimensions, soft colors and materials. The allusions to different periods, Art Nouveau, the 1940s and 50s, was meant to “create the feel of a place that has truly lived” and remind diners of home. Comfy sofas and armchair seating was added to produce a laid-back ambiance.

At the small table there was fine tableware and unconventional dinnerware to match cloth napkins including a napkin replacement with dessert. Although the muted winter light made it less noticeable than it might be with sunlight there was a large sunroof above one of the tables across the dining room from where we sat.

Cellars Wine And Alcoholic Beverage Selection The restaurant housed 25,000 bottles and 1,000 varieties of wine including 200 Rhône and Burgundy domains. About 80 percent of the wines were biodynamic the wine steward explained. Champagnes ranged between 90 euros and 1,654 euros. The menu listed the wines geographically then by producer. The highest prices I noticed were for a 1990 Petrus Jean Francois Moueix for 5,000 euros a bottle, a 1996 Domaine de la Romanee Conti and a 1990 La Tache Grand Cru Monopole each costing 5,700 euros.

Special Menus A small number of top quality ingredients were presented in the menu with the simplest of descriptions. The idea was to surprise guests. The menu options including nibbles, cold starters, warm starters, Xavier’s cheese plate and desserts, varied depending on the number of ingredients chosen. A simple lunch menu with wine, Règle du Déj, cost 99 euros. Règle du Je(u) with one ingredient cost 119 euros, with two ingredients cost 149 euros. There were two premium options the day we had lunch: Notre Règle du Je(u) with two ingredients and wine cost 239 euros; and Notre Règle du Je(u) avec Tartufi di Alba was the same as the previous one with a white truffle dish.

Our preappetizers were served in a pretty white plate. We had cod balls with a liquid center, filling and creamy; crackers with goat cheese and tiny bits of salmon; crunchy veal; a “sandwich” of ham, cheese and pickels; and potatoes with milk and golden caviar. Next the staff brought mild tasting pigeon eggs with pepper and a ceres reduction that left our fingers red.

A black dish contained scallop with tiny beet root, chips and a cumin like spice from Africa. Then we had a wonderful chicken bouillon with bread, foie gras, fresh herbs, mushrooms and a truffle infusion. A fowl mousse with shrimp and cheese was the final appetizer.

The chicken, served with a flavorful sauce and accompanied with a side of dark meat with liver and foie gras, was well liked by my dining partner.

The cheese course included six cow and goat cheeses that ranged from mild to strong in intensity. The blue cheese, served with quince preserves, was a favorite. Brebis cheese served raspberry preserves was a palate cleanser or pre-dessert dish. For dessert we had saffron and tangerine sorbet, crunchy cookies and rose petals and the chef’s signature dessert of egg whites with delicious bergamot flavored crème anglaise. It had a sweet fluffy vanilla flavor in the middle with crunchy sugar on top. Then there was “pizza” of black pepper and banana.

Other In 2011, the restaurant received two stars in the Michelin Guide. That same year, the trade journal Le Chef named Jean-Francois Piege Chef of the Year.

There was a single unisex bathroom in the lobby of the hotel adjacent to the restaurant entrance.

Service The English speaking staff who looked after our table were pleasant and the service was adequate. 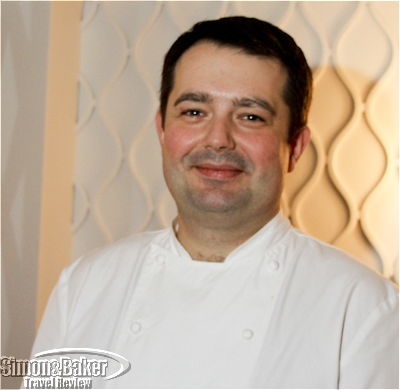 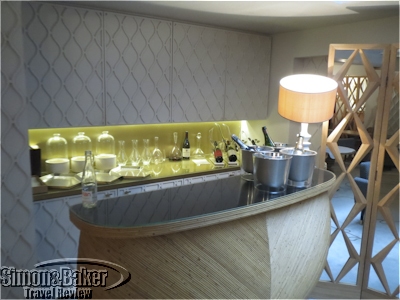 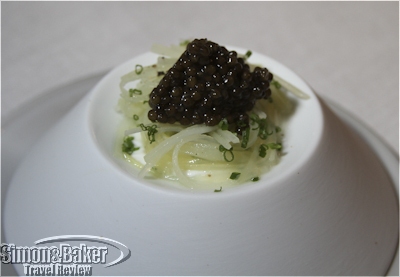 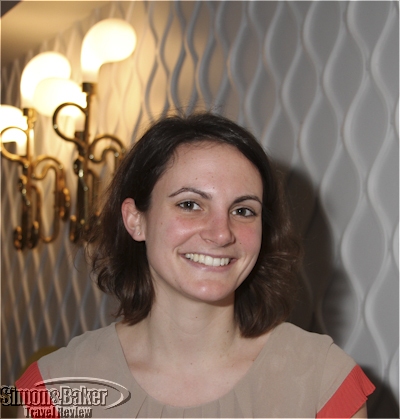 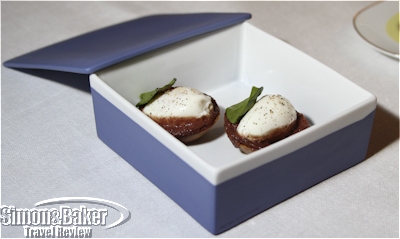 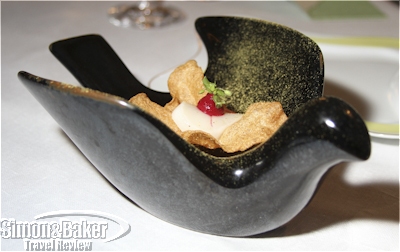 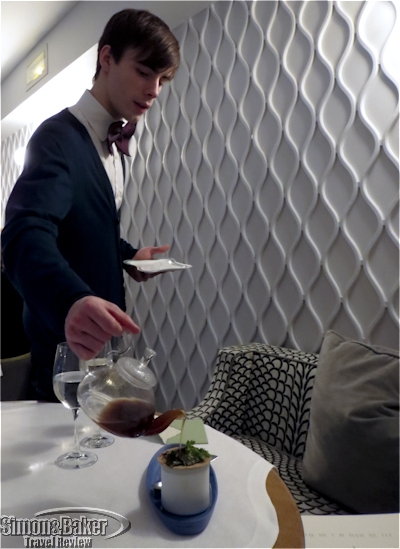 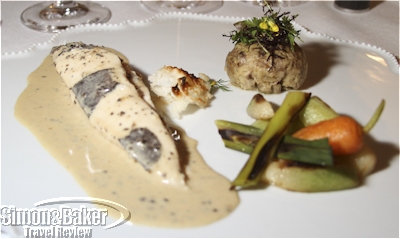 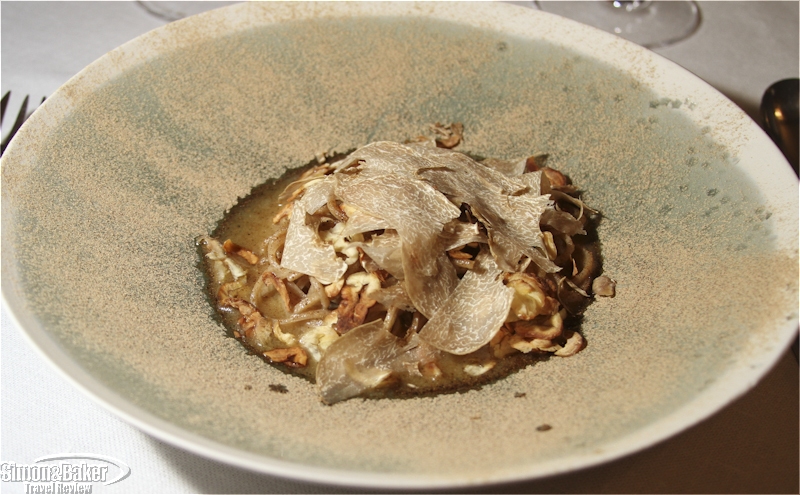 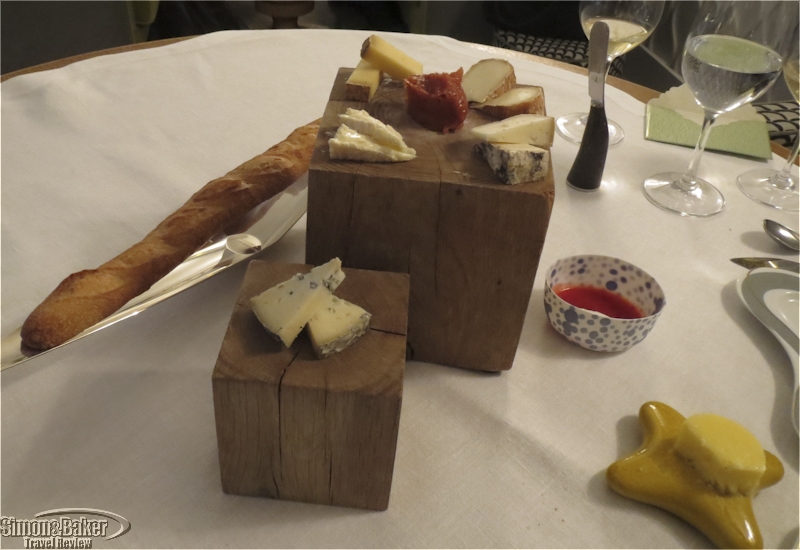