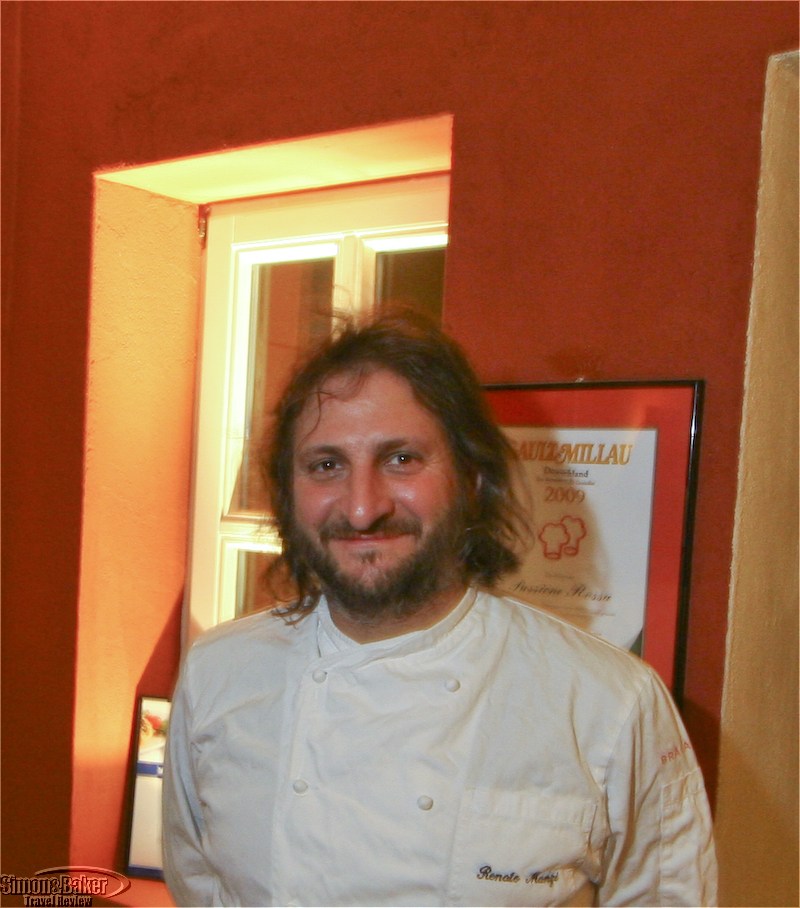 Passione Rossa will be on our list of area favorites.


Overall Impression Passione Rossa, a small family owned restaurant set in a former potato storage shed within the Romantik Hotel BollAnt’s im Park near Frankfurt, was a gourmet surprise. The first hint of the pleasant and tasty meal that awaited us was the friendly welcome we received on our arrival at the restaurant on a quiet winter Sunday.

The refined and delicate dishes we were served contrasted with the old farm setting. Every course was well prepared and presented prettily. The ambiance was charming. The staff translated and assisted us in English through the meal. Dinner was excellent from the moment a polite server escorted us to a table in the middle of a cozy and rustic dinning room until we returned to our rooms across the hotel lawn several hours later. Chef Renato Manzis had an expert and sensivite style of cooking, especially when it came to seafood. Passione Rossa will be on our list of area favorites.

About The Executive Chef Between 1985 and 1988 Chef Manzi trained as butcher Ausbildung zum Metzger. In 1988, he trained as a cook at the Hotel Traube Tonbach. Prior to working at Passione Rossa, he worked at Restaurant Biermann in Soest, Restaurant Waldhaus in Winterberg, Sauländerhof in Hallenberg and Romantik Hotel Löwe in Schwetzingen.

Handicapped Access There were no stairs within the ground floor restaurant.

Location Within the Romantik Hotel BollAnt’s im Park about one hour southwest of Frankfurt.

Opened-Renovated The restaurant opened in 2003. The décor, including curtains, carpet and lighting, was renovated in 2008.

DÉCor-Ambiance The dining room contrasted between a sandstone-vaulted modern interior and the rustic former potato shed where it was housed. Highlights of the tube shaped dining room included stone walls, a ‘ball of string” themed ceiling lamp, fine silverware, and a series of race car driving themed oil paintings. Dim lights, table runners, candelabra and a corner trolley filled with local kirsch waters added a stylish touch to the setting.
Cellars Wine And Alcoholic Beverage Selection There were 250 types of wine including 150 regional choices as well as French, Italian, other German, Spanish, American, South African Australian, Chilean and New Zealand selections. The most expensive wine cost 241 euros a bottle. Other options included whisky, Claretum, a spiced herb wine from a local monastery, and 59 speciality local brandies from Destillerie Dotzauer in varied flavors such as cherry, pear, apricot, raspberry, and hazelnut.

Meal We had a delightful four course dinner. In addition to the pre-appetizer and pre-dessert courses, each of us was served a different menu so were were able to taste a broad sample of the chef’s dishes. Our aperitif beverage, a regional bubbly, was accompanied by Sushi stuffed with scallop and carrots with soy sauce and wasabi cream; a spoon of bell pepper foam; a spoon of Italian ham with tomato and salami and chili foam.

Before the meal proper began we had a series of delectable pre-appetizers: Raviolo stuffed with lobster and white truffle sauce, Thyme with prawn and pineapple topped on pineapple and bell pepper chutney, Croustillant of lobster with mango foam, Tartar of lobster and salmon with saffron jelly, and Consommé of carrots and ginger with tortellini stuffed with duck breast. There were also five types of bread to choose from: onion, tomato, tomato and cheese, nut and rye. These were served with olive oil from Andalusia, Spain and butter.

For appetizers we had one seafood dish for me and a goose liver dish for my dining companion. Turbot, Crab and Langustino topped on risotto with olive and pulpo served with a 2007 Monzinger Fruhlingsplatzchen, Riesling, trocken Weingust Emrich-Schonleber, Monzingen. The seafood had barely touched the grill and was cooked to highlight the delicate flavors. The second appetizer was Trilogy of goose liver served with 2005 Gewurztraminer Auslese, edelsuss Weingut Hexamer, Meddersheim.

Next, we were served pre-dessert bites of Sherbet of bell pepper and raspberry, and Small cake with champagne cream and passion fruit, and crème brulée . For dessert we had Sweet variation of Nougat and Orange and an artfully presented gooseberry vanilla beignet dish. These were served with a 2005 Riesling Auslese “Rosalack,” edelsuss Weingut Schloss Johannisburg, Rheingau.

Other At the time of our visit the restaurant had one Michelin star, 16 points in Gault Millau and had been selected golden Service-Oasis Germany 2008/2009 by American Express.
Date Of Review March 2009

Service Staff members were pleasant, friendly, helpful and looked after us well. 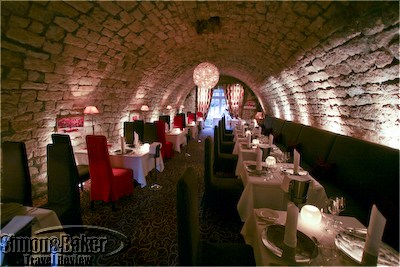 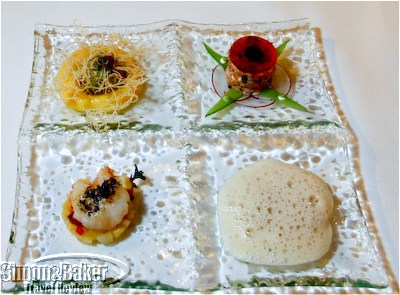 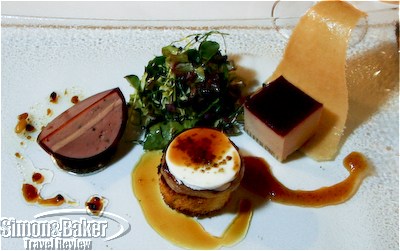 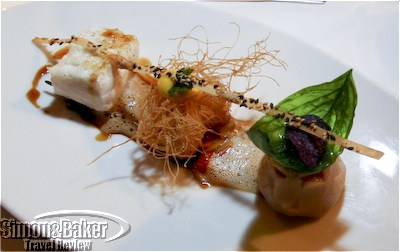 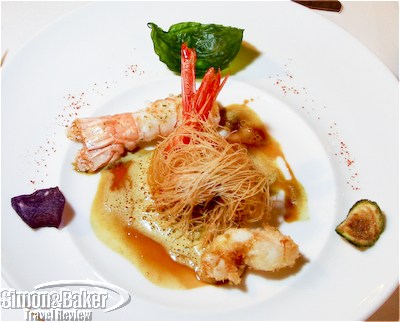 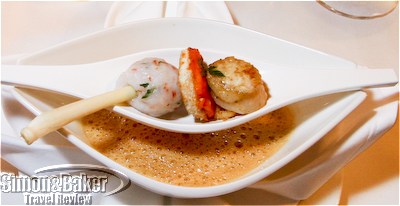 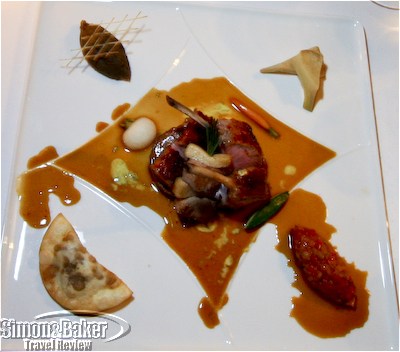 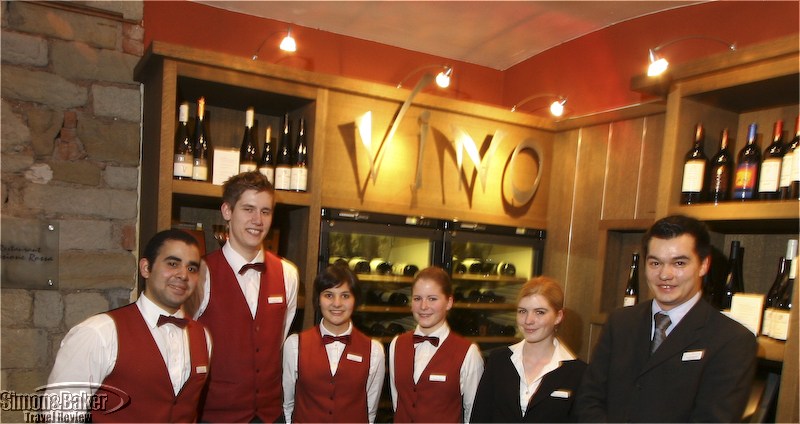