National Geographic Atlas of the World 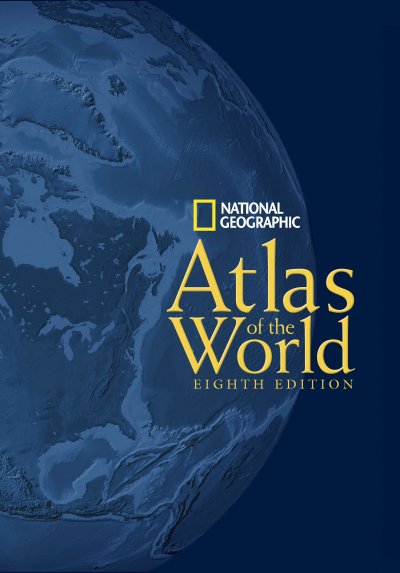 The website which includes animations made with satellite images and ArcGlobe ™ technology, allows visitors to customize maps and add personal labels and them.


Overall Impression In addition to page after page of fabulous maps there are three square feet of information including 75 political and physical maps, satellite photos, and a 134-page index in the latest edition of the famous National Geographic world atlas. Last updated five years ago, the eighth edition emphasizes North American maps. It is divided geographically starting on page 25 as follows: North America (22 pages, p25-47), South America (five pages, p48-53), Europe (14 pages, p54-68), Asia (13 pages, p69-82), Africa (five pages, p83-88), and Australia and Oceania (five pages, p89-94). With as many as 8,000 labels per map plate, the Atlas is one of the most detailed in the world. National Geographic editorial staff made use of the geographic information system and data sources such as the United Nations, U.S. State Department, Central Intelligence Agency, and the National Oceanic and Atmospheric Administration.

Some of the maps are quiet complex and interesting including two page maps each of Satellite Word, a composite of 9,700 satellite images as well as radar and sonar data to map the ocean floor; Physical World, an artistic rendering; Evolution of the Earth depicting the world from 600 million years ago to the present; Biodiversity, maps reflecting 825 terrestrial and 96 freshwater and marine “ecoregions;” Population, Cultures (including languages and religions), Migration (including remittances sent and received), Conflict and Terror, Economy and Trade, Food and Forests, Energy and Minerals, Transportation and Communication, Health, Nutrition and Literacy, Environment, and Wildlands. There are also Cities with size estimates from 1950 to 2015 and maps of major metropolitan areas; Space with an image of the Hubble Ultra Deep Field, Northern and Southern skies, The Moon, Mars (compiled from NASA spacecraft data), The Solar System, The Milky Way, The Universe, and Nations with brief descriptions and approximate locations of each.

The book, much of which was bound by hand, is able to open “nearly flat” and comes with an interactive password protected website which includes updates to the Atlas. According to National Geographic it is the first atlas with a totally integrated online component including the latest mapping techniques and satellite imagery. When we last visited the website two updates had been made: Great Sand Dunes National Park and Persian Gulf. These updates could be printed and kept with the atlas or reviewed directly on the website. The website which includes animations made with satellite images and ArcGlobe ™ technology, allows visitors to customize maps and add personal labels and them.