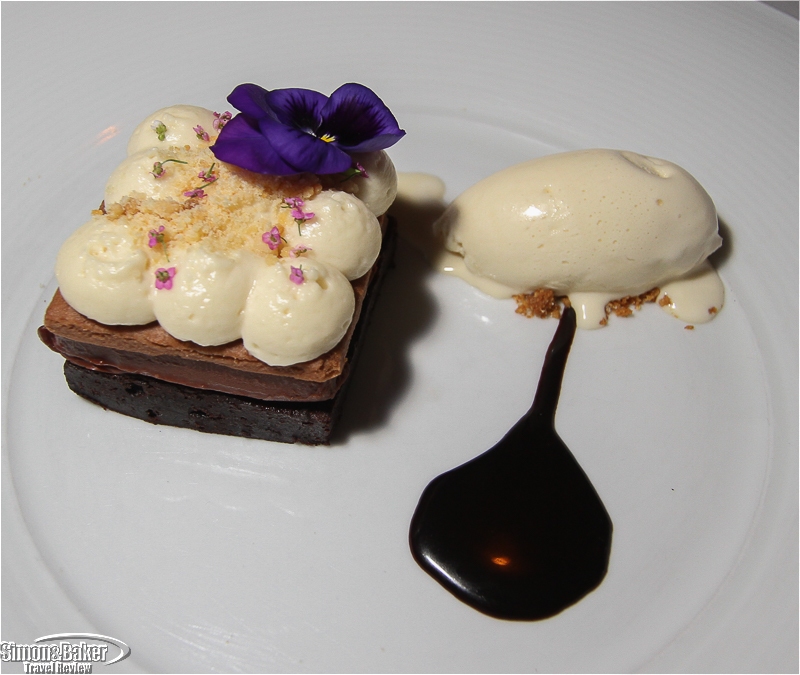 We look forward to sampling more Natalie’s dining the next time we visit the area.


Overall Impression After strolling around a gray, dreary and rainy Camden, Maine during a chilly autumn day, and a disappointing lunch in town we were loathe to drive back in the rain for dinner. We had heard good things about the restaurant and had hard to come by reservations so we moved forward as planned. As we drove down the dark two lane slick road from Lincolnville Beach south toward Natalie’s we wondered whether we would be better off returning to the dry and warm comfort of our inn.

The first sign of the positive experience that awaited us was when a tall and handsome man approached me in the parking lot as we walked toward the inn to offer me the shelter of his umbrella. Instead of turning back to the building and away from the drizzling rain, after seeing celebrity guests off, he went out of his way to greet us. Once we were inside the inn, he introduced himself as Bart van der Velden, the property manager, and welcomed us to the restaurant.

Five minutes later, we were comfortably seated in the cozy dining room with wood floors and a red vintage theme browsing menus. From beginning to end, the meal was outstanding, one of the best and most refined we have had in Maine. The pretty presentation of the dishes was a match for the flavor combinations and thoughtful wine pairings. We especially liked the memorable Lobster Tasting Menu. From wine pairing to service to the meal itself the experience was worth every discomfort we suffered making our way there and back. We look forward to sampling more Natalie’s dining the next time we visit the area.

About The Coexecutive Chefs Long was recognized as the 2013 Maine Lobster Chef at Maine’s Harvest on the Harbor. Prior to working at Natalie’s, he worked at Charlie Trotter’s and Eos in San Francisco. Stevens had been sous chef at Bresca in Portland, Maine and had worked at Restaurant Daniel in New York City.

Executive Chefs At the time of our visit, two executives shared the reigns at Natalie’s, Chris Long and Shelby Stevens.

Since becoming manager of the restaurant in early 2013, van der Velden had overseen the restaurant’s front of house, bar, kitchen and staff. Prior to that, he held management roles at Boston’s Fairmont Battery Wharf Hotel and the Bel Air Hotel in the Netherlands. He was also assistant food and beverage manager at the Golden Tulip in Noordwijk Beach in the Netherlands.

Handicapped Access There was a parking lot that ran level to a dining room entrance.

Location Natalie’s is about 80 miles (130 kilometers) from Portland and about 60 miles (95 km) from Bangor, Maine.

Opened-Renovated The restaurant was established in 2007. At that time, the inn where the restaurant is housed, underwent an extensive $2 million renovation. Natalie’s was styled by European designer Mascha Brunia. Small enhancements were made frequently to the restaurant, according to a spokesperson.

Brunyanszki, born and raised in the Netherlands, has worked in the travel, hospitality, entertainment, and marketing industries. In the past, we was a tour leader for Boer en Wendel (TUI) and Unitravel, where he was responsible for unique high end trips throughout the Far East. He served as residence manager for the hotel and beach club at Club Cas Abao in the Dutch Caribbean, as an independent consultant and “mystery guest” for some hotels, and as marketing manager at one of the largest travel companies in the Netherlands. His day to day responsibilities were oversight, management, guest services, staffing, design and direction for the Inn and Natalie’s.

Size The 2,500 square foot restaurant with a staff compliment of 20 could accommodate 57 guests.

Wine Director Micah Wells, a personable and knowledgeable member of the restaurant team, was in the final phase of becoming a Master Sommelier at the time of our visit. Wells had created wine menus at the Ocean Edge Resort and Golf Club in Brewster, Massachusetts. Previous experience included the Lure Grill at Winnetu Oceanside Resort, Hotel Manisses/Block Island Resorts and Beaver Creek Mountain Dining at Vail Resorts. Wells was tasked with managing Natalie’s wine list featuring more than 200 specialty wines.

DÉCor-Ambiance We liked Nathalie’s cozy ambiance and vintage Paris style. Natalie’s décor was meant as “a nod to the glamour of Paris in the 1920s, with a vibrant red theme, custom made armchairs, white linens, vintage crystal chandeliers over the bar and a mix of French antiques and modern furnishings. The bar featured doors salvaged from a French convent.
Cellars Wine And Alcoholic Beverage Selection The restaurant wine list featured more than 200 wines including a wide range of white, red, sparkling, and dessert wines, as well as special wines for each season. The list emphasized European wines. There were also selections from as far away as China and Lebanon. According to promotional materials, every bottle was stored in a temperature controlled environment, and the restaurant offered 25 red, white, and sparkling wines available by the glass.

Special Menus There were several fixed price menus on offer including the five course Lobster Tasting Menu for $109. Wine pairings to match it cost an additional $72. Natalie’s also offered a seven course Chef’s Tasting Menu for $97, and an A La Carte style prix fixe three course menu with appetizers, main courses and desserts for $72. In addition, the restaurant offered a Bar Menu.

Meal We began our meal with a truffle radish fish palate teaser that packed a flavor punch. Next, there was a chard, sweet pepper, almond, basil and Asian perch amouse bouche. There were two types of warm bread on offer, potato and white, and six salt flavors. We sampled the truffle and porcini which was characterized by a heady truffle aroma and taste. The other flavors were garlic, spicy, rosemary and ginger. There was a red currant and black pepper palate cleanser between courses. Should we wish to add a touch of citrus to our meal there were lime and lemon slices at the table.

I sampled the seven course Menu Saisonnier seasonal menu and my dinner companion had the five course Lobster Tasting Menu, the restaurant’s signature tasting menu designed to highlight “the bounty of Maine and the freshness of the season.” Our favorite of the two was the Lobster Tasting Menu. The two memorable courses were the smoked foie gras from the seasonal menu and the grilled lobster claw with miso glaze from the lobster menu.

The Menu Saisonnier courses were: Uni served with white sturgeon caviar, lemon chutney, Camden Harbour Inn Nastrurium (from the Inn’s garden), creme fraiche and pickled Fresno chili, a most pleasing way to eat sea urchin; Maine lobster with cauliflower espuma with caperberries, and arugula pesto; Smoked foie gras with celery root puree and ribbons with radichio, Brussels sprouts and demi, a favorite; Local mushroom cannelloni with shaved beets and grape must; Beef tenderloin with potato gnocchi, turnip puree, coriander jus, radish and baby kale, which stands out in my memory for the tender and flavorful combination of the meat; Fuzzy Udder goat cheese with date puree, fennel seed powder, grapes and rye croutons; and chocolate malt torte with manjari (chocolate) ganache, malt crumble and vanilla malted ice cream. We liked the dessert in general and the ice cream was a favorite.

We had Acqua Panna still water from Italy with the meal. The accompanying wines were 2012 L’Ecole #41 Semillon, Columbia Valley, Washington, which had a light mineral flavor; 2011 Terre Rouge Enigma, Sierra Foothills, California; and 2012 Salmon Run Rkatseteli, Finger Lakes, New York; Hippolyte-Reverdy Sancerre Rouge, Loire, France. With dessert we had a lovely sparkling Italian 2012 Soprano Brichetto Do Acqui from the Veneto region with the chocolate dessert, and non vintage Neige Apple Ice Wine from Canada, which was like apple in a glass, with the apple tart.

Other Since 2008, Natalie’s Restaurant had maintained a four diamond rating from the American Automobile Association. It was among the 2013 OpenTable Diner’s Choice Top 100 Best Restaurants in America, curated from thousands of reviews from diners on OpenTable. Its wine list had been recognized by Wine Spectator every year beginning in 2010. The staff were especially proud that in 2014, the restaurant presented a special seven course Relais & Chateaux 60 anniversary dinner with Dutch chef Dennis van den Beld from the Hotel Landgoed Het Roode Koper.
Date Of Review October 2014

Service Staff members (with the exception of a woman with an indifferent attitude at the hotel reception in the afternoon) were friendly and attentive with an old world sophistication and attention to detail. The kitchen staff coordinated the five course and seven course menus in such a way that neither one of us was ever eating alone. Cristina, our server, and Micah Wells, the restaurant’s enthusiastic wine director, made sure we lacked for nothing during the meal. Thanks to heated plates our food was always hot when we tasted it even after we took time to photograph each dish. When I returned from the restroom my napkin had been folded. Micah kept a an eye on our beverages, ensuring they were in sync with the meal so our wine and our dishes arrived at almost the same times. 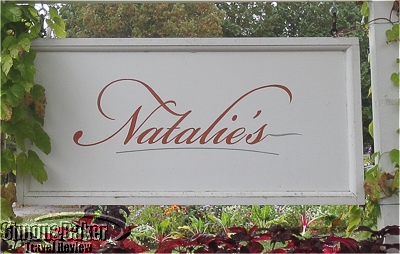 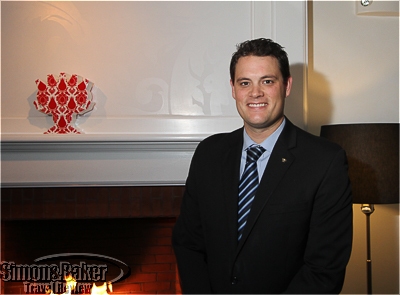 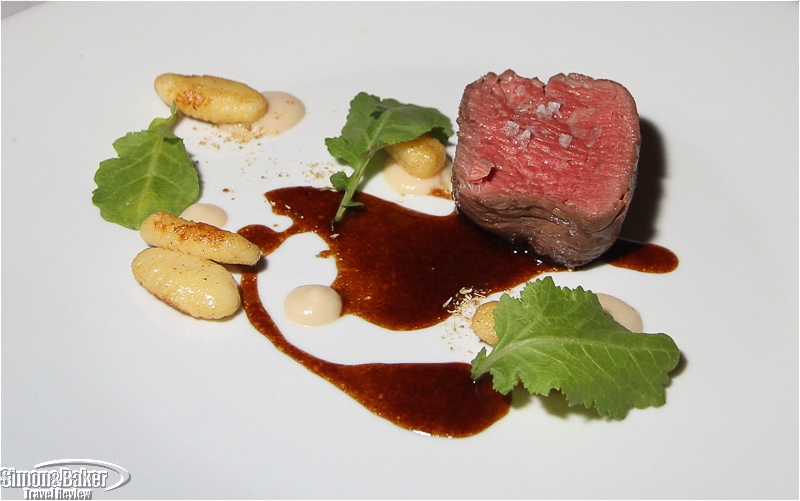 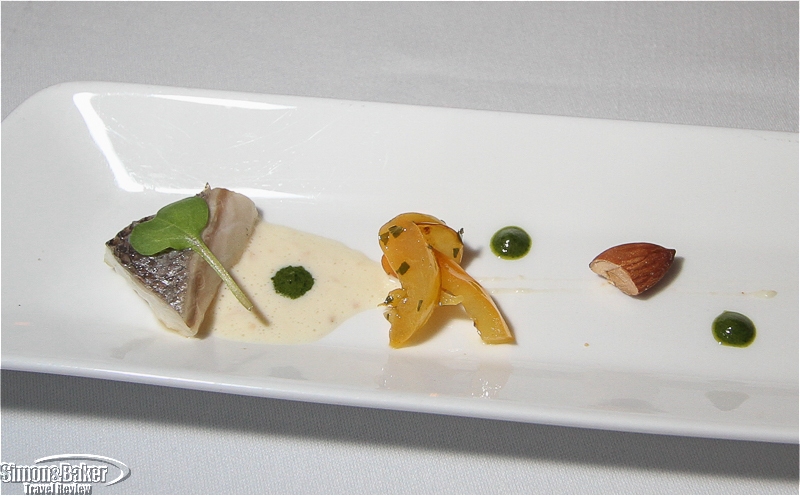 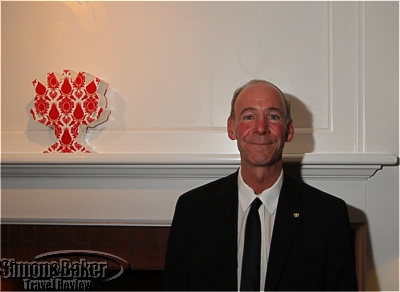 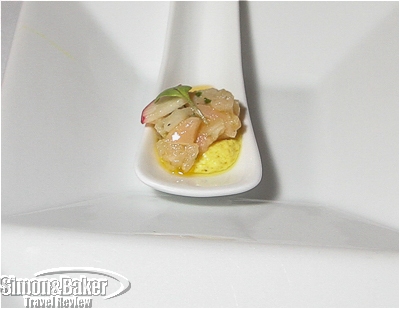 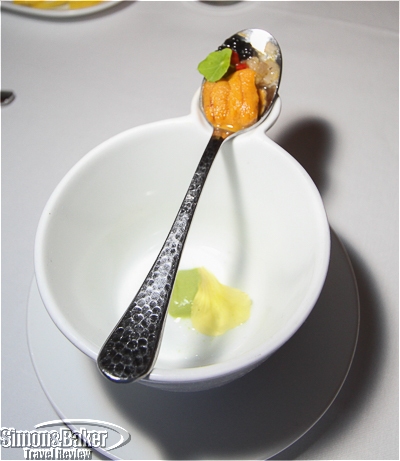 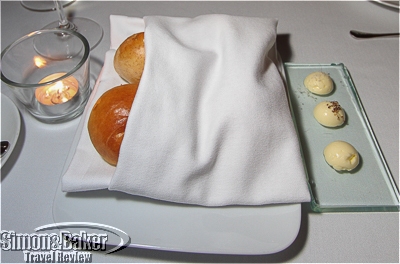 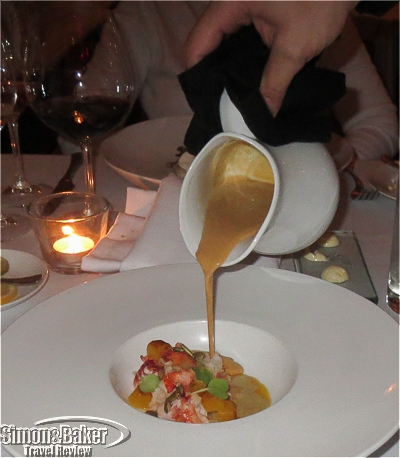 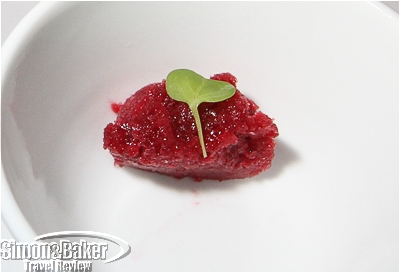 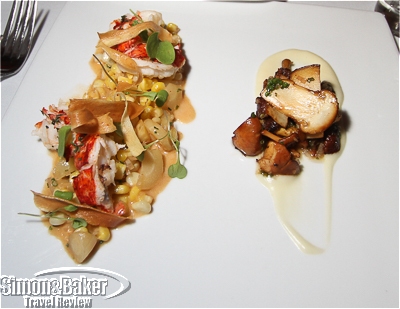 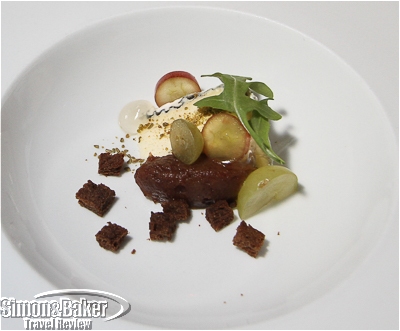 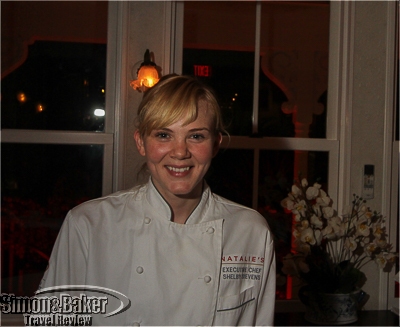 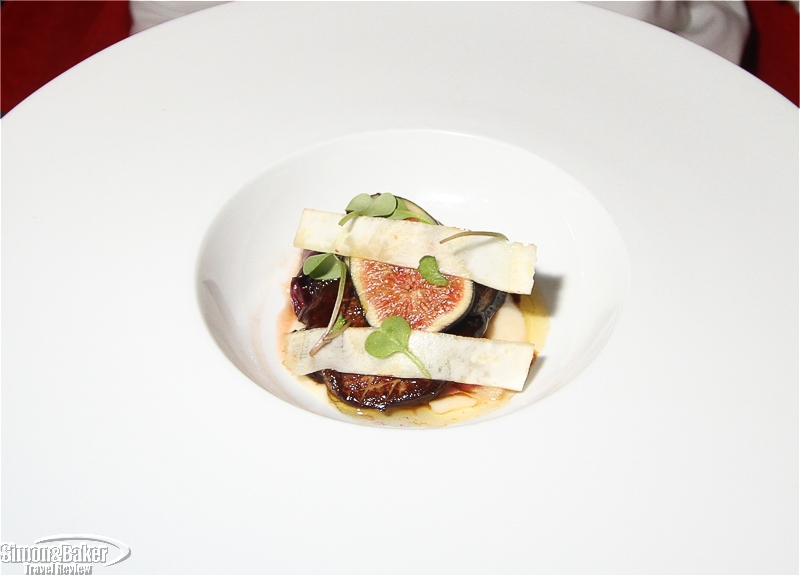 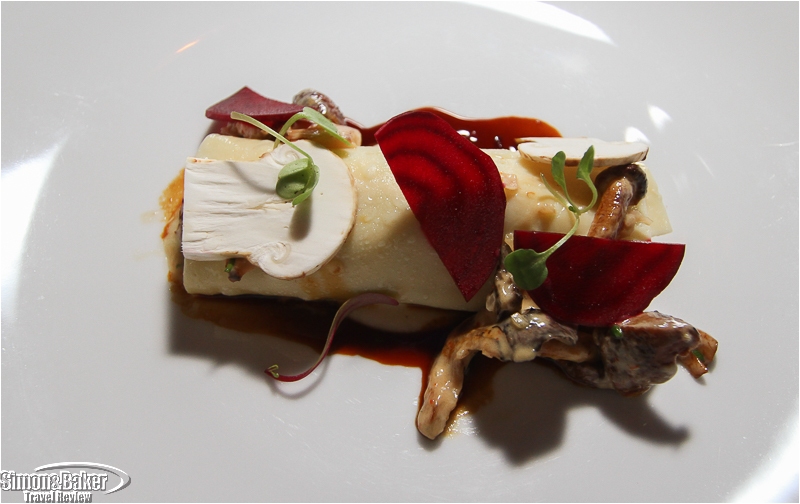 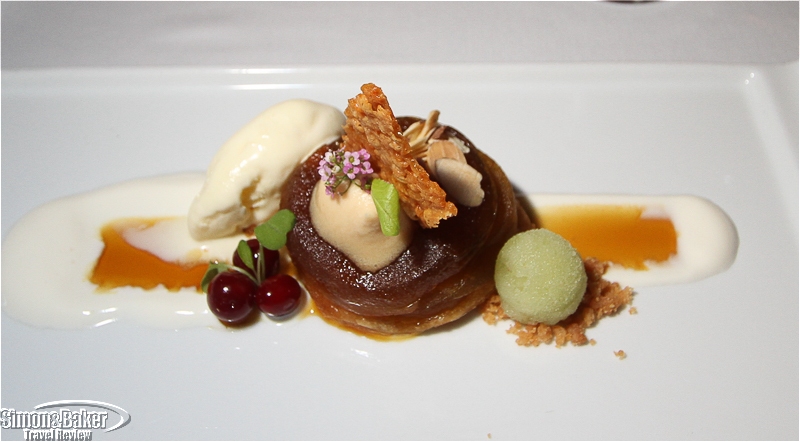