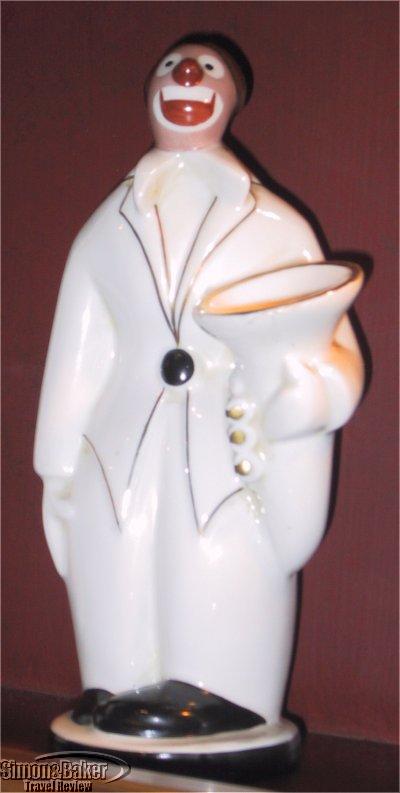 It had just the right touch of artistic flair and skilled cooking to temp us to return.


Overall Impression Our meal at Michel Rostang, a family business centered on the latest chef in a line of five generations of kitchen professionals, was like having a delicious lunch at an affluent friend’s house. The food was well prepared and beautifully presented, the dining room was cozy and featured a number of noteworthy decorative touches, the wine cellar was ample and diverse, and the staff were friendly, knowledgeable, helpful and client centered.

A restaurant that has been around since the 1970’s, whose founder owns several popular bistros in town and whose manager has been around for 18 years has evidently found the formula for commercial and cooking success.

Michel Rostang, with its splendid French flair for elegance and contemporary décor, was the kind of restaurant we would visit often if we lived in the neighborhood; the kind of place where we felt welcome and comfortable. It had just the right touch of artistic flair and skilled cooking to temp us to return.

About The Executive Chef A native of Pont de Beauvoisin, Michel Rostang was born to a family of chefs. His schooling was at the Maison mere a Sassenge near Grenoble and the Ecole Hoteliere de Nice. He worked at Lasserre et La Marée in Paris, Laporte in Biarritz and again in Paris at Lucas Carton. In 1978 he opened his Paris restaurant and was quickly recognized in gastronomic circles. In the 1980s and 1990s he established a series of neighborhood bistros and restaurants including Dessiriere and L’Absinthe (now run by his daughter Caroline Rostang).

Handicapped Access A side entrance made wheelchair access possible. The lower level bathrooms were harder to negotiate for wheelchair bound diners.

DÉCor-Ambiance The first feature we noticed upon arrival at Michel Rostang was the wood and cloth paneled walls, sculptures and porcelain figurines. Next we became aware of the artistic influence and the homey atmosphere highlighted by details such as the custom made silverware, glassware, and dinnerware (even the napkin holders were custom made). We sat in the Robj dining room where numerous Robj figurines made their home on wooden shelves. From our table we had a partial view, through a large glass window, of the kitchen. In other parts of the restaurant there were Arman sculptures. A colorful Niki de Sainte Phalle hung on the wall of the large dining room; Lalique wall features were a highlight on the rear wall of the art deco dining room and a smaller dining room stood out for its vibrant glass ceiling. There were also art Nouveau pieces by Gallé and Mucha; and a César.
Cellars Wine And Alcoholic Beverage Selection The restaurant offered a broad selection of wines and champagnes. The modern basement cellar housed 10,000 bottles of wine and a wine reference of 1,200. There were some grandfather bottles including one dating back to 1875 from a private LaTour collection and a Chartreuse collection. A separate larger cellar in the outskirts of Paris housed another 40,000 bottles.

Meal We were promptly greeted and escorted to a corner table adjacent to many shelves of porcelain figures. Lunch began with a glass of champagne and varied pre-appetizers including tiny tomatoes dipped in poppy seeds, pear chunks soaked in red wine, slices of salami, small bread and fried fish nibbles, and finger sized morsels of white bread (club sandwich style) and a sardine spread. By the time the bacon flavored lentil soup cup was served we were ready. Our appetizers, the daily bacon wrapped scallop special and La Tarte tiède et Croustillante de Saumon Cru crème épaisse a l’oignon fondu (pastry puff and heavy cream with smoked salmon) arrived. They were delicious. Our main course was another daily special: small chunks of pork chop accompanied by pork side dishes including a batter fried vegetable medley and a pig’s ear crispy cake. We wrapped up the meal with La Tarte Chocolat Amer , a molten dark chocolate cake and Le Soufflé Chaud Caramel Sauce caramel au beurre salé “Le Roux” Gateau de Savoie , a warm caramel soufflé with a Savoie cake.

Other Though a guest at a neighboring table lit a cigarette while we were enjoying our appetizer, we were undisturbed during our meal thanks to the thoughtful manager who immediately lit candles in all the nearby tables ensuring most of the cigarette smoke was quickly absorbed. The restaurant first received two Michelin stars (red guide) in 1980 and maintained them to the present.
Date Of Visit January 2005

Service The service was excellent. The English speaking manager, who we later learned had been with the restaurant for 18 years, monitored diners’ needs closely as did other service staff. We never lacked for wine, water, bread, butter or anything else. 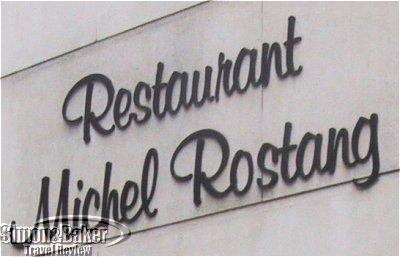 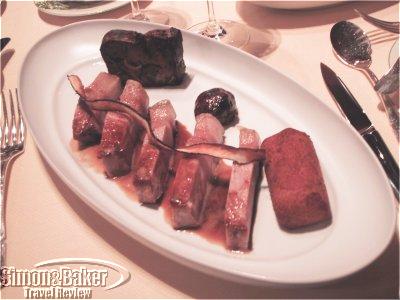 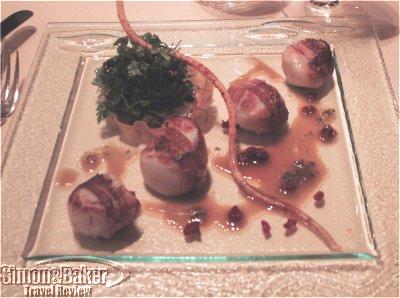 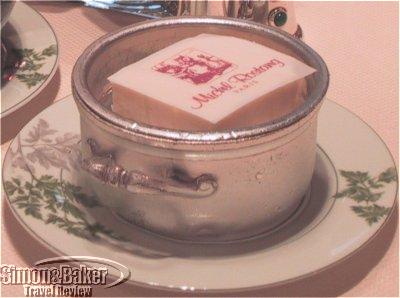 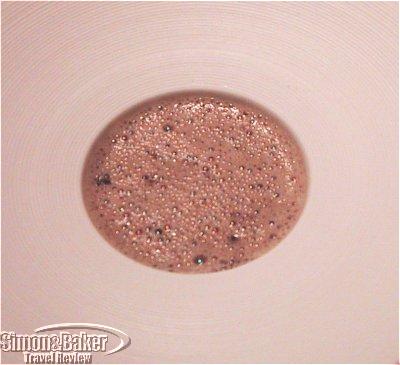 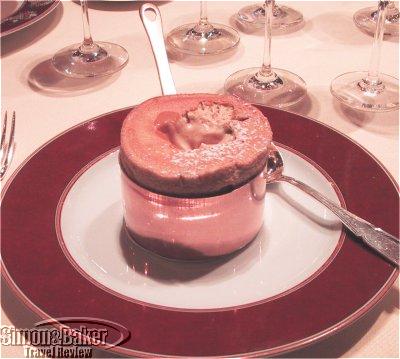