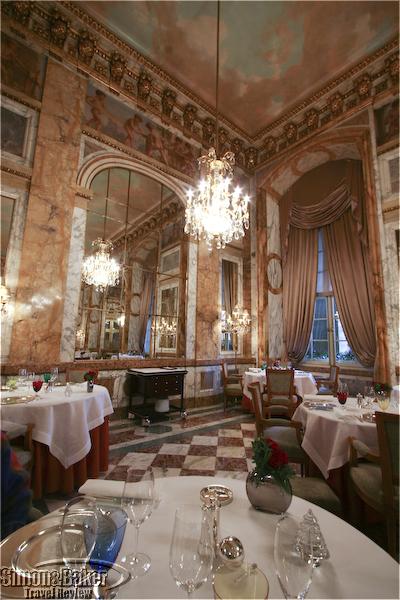 We hope they continue bucking the trend.


Our most recent review can be found here.
Overall Impression Les Ambassadeurs at the Hotel de Crillon is ideally situated in a prime spot on the famed Place de la Concorde. Its central location makes it convenient as much for first time visitors to the City of Lights as for city dwellers. Although the restaurant’s location is appealing it was the food that drew us back to revisit the hotel restaurant. Once inside the pretty dining room we were in a gourmet cocoon. Tables were spaced conveniently to allow private conversations and the ambiance was serious and subdued with many of us concentrating on our multiple course meals.

The dishes were perfectly prepared, delicious and beautifully presented. The dining room, table setting and dinnerware were attractive and appeared to have been selected with great care. The service during the entire meal was also excellent and there was a sense of showmanship in the delivery. When our dishes were served there was precise staff coordination. Our servers delivered each item at just the right time along with matching side dishes, sauces and descriptions in English so we knew what we were served, how it had been prepared and with ancillary explanations that might apply to its enjoyment. Each course appeared when we were ready for it. We never felt rushed or sought additional food before it arrived. The pace of the meal was just right. We especially enjoyed being invited, at the end of the meal, to enjoy our warm beverages, coffee and tea, and companion chocolates in an adjacent salon.

Jean-Francois Piége, the restaurant’s enthusiastic chef and his team are on a certain path to continued recognition. Although we were pleased with the meal the last we dined at Les Ambassadeurs, our most meal was superior in every way. During these uncertain times when many restaurants seem to be focusing increasingly on the bottom line, relying on celebrity chefs and their reputations and cutting back expenses it was encouraging to see a self confident team that took obvious pride in the meal and its delivery, ensuring a superlative experience for appreciative diners. We hope they continue bucking the trend.

About The Executive Chef A native of Drome in southeastern France, chef Piége started out aspiring to be a gardener. He began his career at Chabichou in Courchevel and went on to the Chateau Eza on the French Riviera. From there, he transferred briefly to the Hotel de Crillon. Later, while in the military, he worked in the kitchens of the presidential palace. He went on to collaborate with Bruno Cirino at Les Elysees. Eventually he worked at Alain Ducasse’s Louis XV and Plaza Athénée restaurants. In 2007, Gault & Millau named Jean-François Piège chef of the year.

Handicapped Access We were told staff assist guests regularly to cross over the four steps at the entrance. Restrooms were a level below the restaurant which could be reached by stairs or elevator.

Size The 110 square meter restaurant can accommodate 35 people for lunch and 45 for dinner. Twenty wait staff were employed there.

DÉCor-Ambiance Interior architect Sybille de Margerie, in a joint venture with the École des Beaux-Arts, under the direction of Monuments Historiques played a major role in the revamping of the dining room décor. The goal was to make the XVIII Century ballroom lighter than before and to lend it refined simplicity and warm elegance. Mushroom beige shade were installed to play with the light from the Place de la Concorde; armchairs and tables were upholstered in light colors to reflect off the varying shades of the marble in the handsome room. The dining room had Baccarat chandeliers.

Our presentation dish was silver. The silverware was by Christophle and the crystal was Baccarat. The dinnerware, in general, was beautiful. We noticed the striking animal horn butter knife. We also appreciated the change in napkins and dinnerware for the dessert service. According to promotional materials all the accessories in the room for food presentations were created specifically to enhance and harmonize with the décor. For example, the glass domes for the cheese boards were created by Luzaro de Biot, a master glass blower, and there is a crystal table designed by Baccarat. Stylist Mercedes Calderon, redesigned the uniforms, especially the classically cut dinner jacket for a less formal look.

Head Sommelier David Biraud first trained to be a chef. Along the way he discovered a passionate interest in viticulture. He specializes in great classic French wines from Bordeaux and Burgundy. In 2007, his assistant, Antoine Pétrus won the Ruinart Trophy for Best Young Wine Steward in France.
Cellars Wine And Alcoholic Beverage Selection Les Ambassadeurs had a collection of more than 40,000 bottles. There were 1,000 types of wine ranging in price between 30 euros and 11,000 euros.

Beverages were not included in the menu prices.

We gladly accepted an invitation to enjoy coffee and tea in the adjacent salon. We had observed the always popular salon on many occasions and were pleased to relocate there for the conclusion of our meal. I was able to select my tea from an herb trolley which included several options and four types of honey. The tea service was a handsome silver and glass set. Hazelnut chocolates accompanied our hot beverages.

Other Les Ambassadeurs had two Michelin stars. It had the following scores in restaurant guidebooks: Guide Champérard 2008: grade of 19.5 out of 20; Guide Pudlo 2008: the higher distinction for service and quality of food; and Guide Lebey 2008: 3 Tours Eiffel.
Date Of Review 2004 2008 2010

Date Opened-Most Recent Renovation The restaurant opened in 1970 and it was most recently redecorated in 2003.

Service Staff members were efficient, helpful, and knowledgeable. The service was outstanding.

Would You Dine there again/recommend it ? Yes 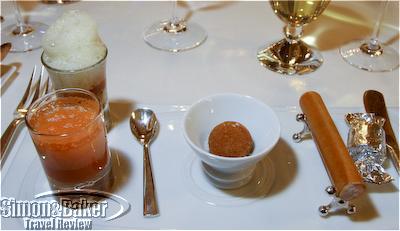 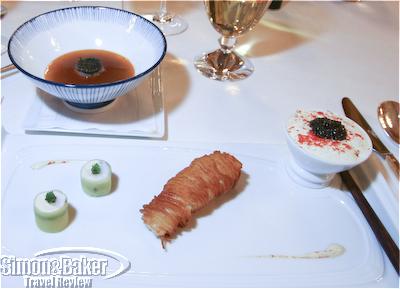 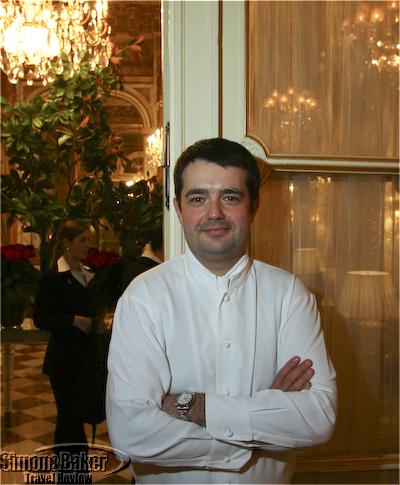 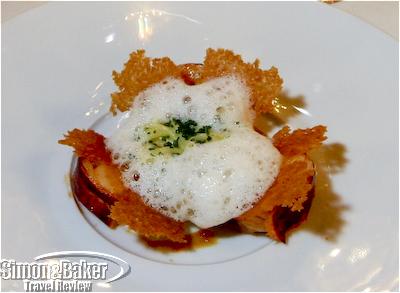 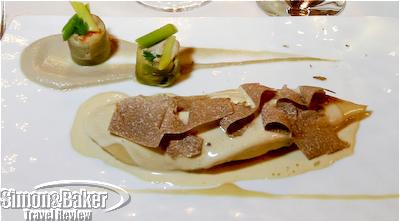 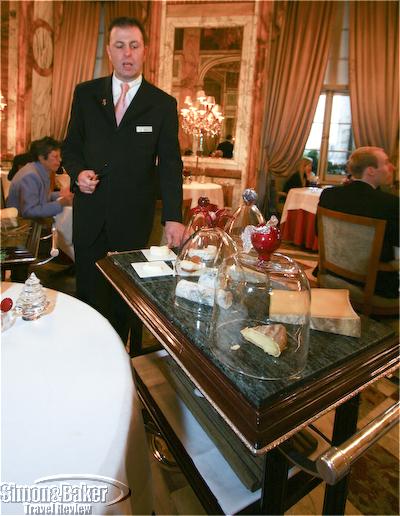 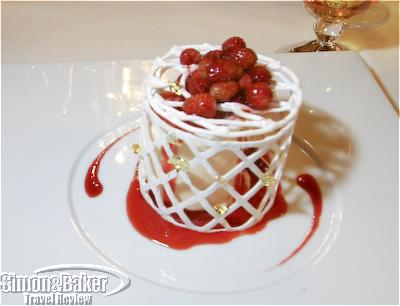