Our most recent review of this restaurant is here
Overall Impression In July 2008 Chef Eric Briffard, formerly at Les Elysees du Vernet and before that at the Plaza Athenée, took over the kitchens of Le Cinq as Chef des Cuisines. We had sampled and liked his cooking on several occasions when he was at Les Elysees du Vernet and were eager to see what changes he had made at the well known Parisian restaurant. We recently had lunch at Le Cinq and reacquainted ourselves with this talented chef’s style and the famous restaurant. Although the dust of a new head chef was still settling in part, the dishes themselves were artfully prepared and delicious.

We distinctly remembered his gift with seafood and were pleased to rediscover his marvelous dishes at the new venue. The whole meal evoked the ocean with its flavors and aromas. Chef Briffard’s skills were very much in evidence. And, as in the past, we enjoyed dining in the handsome dining room. Sommelier Thierry Hamon’s wine pairing enhanced our meal, bringing out the subtle seafood taste without ever overwhelming the dishes.

Lunch at Le Cinq was well rounded and delicious and definitely worth a repeat visit. We look forward with enthusiasm to following Chef Briffard’s promising path at Le Cinq.

About The Executive Chef A native of Burgundy, Eric Briffard began his apprenticeship in 1976 in his native region with Michel Moret at Relais Saint-Fiacre . Five years later he became a part of the “compagnonnage.” This allowed him to work with Joël Renty (Hôtel Concorde Lafayette), Marc Meneau ( L’Espérance , Saint Père sur Vézelay) and Philippe Groult ( Manoir de Paris ).

Eventually, Chef Briffard headed the kitchen of Les Elysees du Vernet in Paris for several years before arriving at Le Cinq. Prior to joining Les Elysees du Vernet in December of 2002, Briffard headed La Régence, the gourmet restaurant at the Plaza Athenee Hotel. Earlier in his career he was executive chef of the Royal Park Hotel in Tokyo. He was also executive chef at Jamin restaurant in Paris. His mentors were Joel Robuchon, Marc Meneau and Philippe Groult. In 1994, he received the presidential medal for Meilleur Ouvrier (Best Craftsman of France).

About The Head sommelier Thierry Hamon, a graduate of the Lycée Hôtelier of Dinard, France, began his career in 1995 with Eric Beaumard as a Commis at La Poularde a restaurant in Montrond-les-Bains, France. He worked there for two years before heading to Oxford where he joined the team of the French restaurant Le Manoir aux Quatre Saisons. Later he returned to La Poularde where he worked for another two years before joining the crew of the George V Paris in December 1999, when the hotel reopened. He served as sommelier at the side of Eric Beaumard, and became assistant to the restaurant’s former wine steward, Enrico Bernardo, in April 2000.

Handicapped Access Yes, there is a special ramp available to access the main entrance of the hotel and the stairs to go to the restaurant’s restrooms. Le Cinq is on the ground level.

Restaurant Manager Eric Beaumard who was voted 2003 Sommelier of the year by his peers in the French magazine Le Chef .

Size The 183 square meter restaurant had a staff of 100 and capacity for 55 guests.

DÉCor-Ambiance We reached the entrance to the restaurant after being intercepted by hotel staff. Once they confirmed we were headed in the right direction we were allowed to proceed past a hall of tables to the two iron Art Deco doors that mark the official entry point to Le Cinq. The dining room, which faced the hotel’s inner courtyard, was set in a beautiful classic gray and gold large salon decorated by French Architect Pierre-Yves Rochon to simulate a French castle. During our end of year visit, the restaurant was decorated with holiday accents and the distinctive floral designs of Jeff Leatham.

The china was created by Philippe Deshoulières from a by Pierre Yves Rochon. The presentation plate was white crossed by a broad grey stripe. In the center of the plate there was a reproduction of an emblematic cameo that can be seen on the top of each wall of the restaurant.

Head Sommelier Thierry Hamon
Cellars Wine And Alcoholic Beverage Selection The selection was excellent with a vast number of options from diverse countries and in a variety of price ranges. Through the Four Seasons Hotel Wine Cellar the staff have access to 50,000 bottles of wine. We liked the two-page discovery section of the wine list with selections from Loire, Rhone, Alsace, Bordeaux, Languedoc Roussillon as well as Austria and Hungary. As champagne aficionados we particularly appreciated the many champagne choices. It was possible to order by the glass; and for an over the top occasion there was a 1973 Krug for 5,000 euros a bottle. There were half bottle options in whites and reds; wines from Argentina, Australia, Chile, Germany, Italy, Japan, Lebanon, New Zealand, Portugal, Spain, South Africa, Switzerland, and United States; five types of still water and eight varieties of sparkling water. We also spotted an 1896 Chateau d’Yquem (1,200 euros) and a 1983 Romanee Conti (1,900 euros). Although we didn’t see them on the wine list, there was an 1834 Madeira for 36,000 euros and 1945 Chateau Mouton Rothchild.

The cellars 50,000 bottles were 14 meters below the ground in a former stone quarry used in part to build the Arc de Triomphe. Eric Beaumard is credited with building the cellar inventory when the restaurant reopened after a closure in the 1990s. The hotel also owned two secondary cellars, one housing 100 champagne varieties and a third in the outskirts of the city where 10,000 bottles are aging comfortably. To keep the cellars current, the staff add 20 new selections a week.

Meal We began lunch with a coupe of champagne each (a 1999 Taittinger and a Lanson rose) and tender fried calamari. We were served bread with olive oil from Tuscany and sea kelp butter. There was a second amouse bouche made of pumpkin soup, sorel, pop rock (burst into fun popping once in the mouth) a spoonful of marinated squid and a creamy centered bread.

A selection of chocolates, marshmallow and caramels was served with our verbena and coffee.

Other The china, linen and silver were custom made. Dress Smart casual attire was recommended for lunch and formal or business for dinner. One of the many features we liked at Le Cinq was the respectable distance between tables. This allowed us to have a private conversation and a feeling of space even though everyone dined in the same large salon.

The restaurant relied on three vegetable suppliers including one with organic produce exclusively. Our langoustines were delivered alive the morning we ate them. The turbot slices were from a 9 kilo fish.

Service The staff were polite, helpful and efficient, although at times they seemed a bit overwhelmed and preoccupied. Overall our meal was well served. 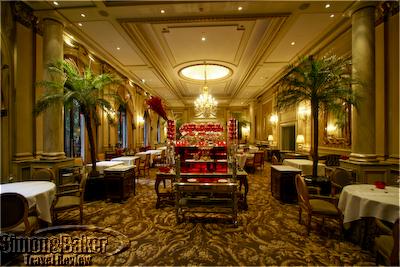 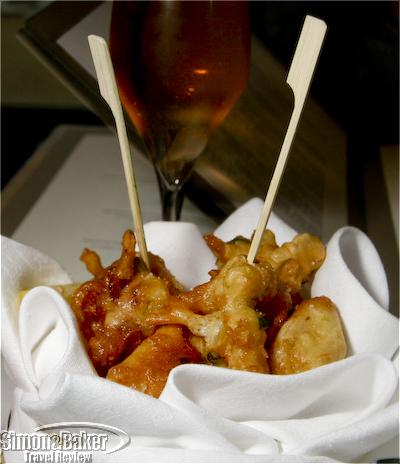 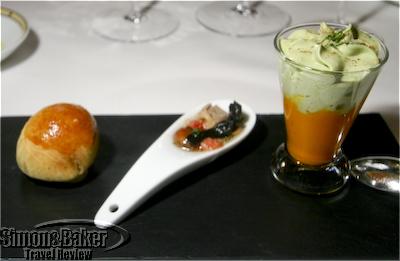 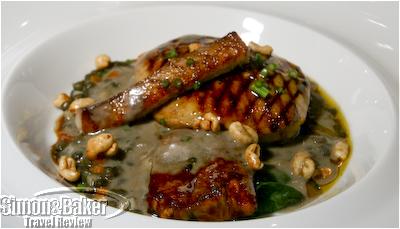 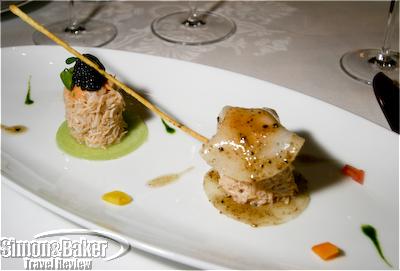 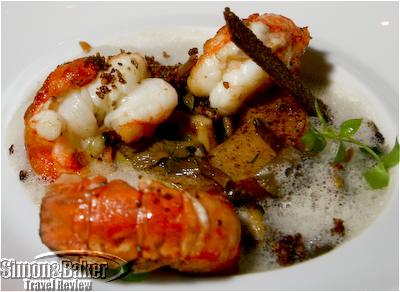 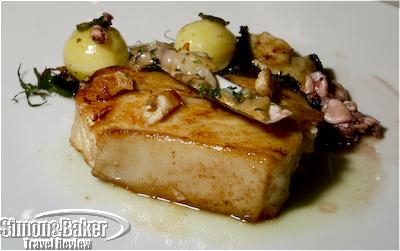 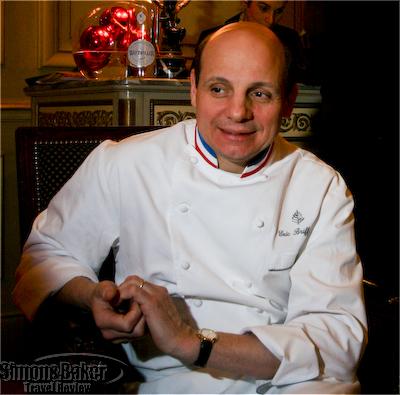 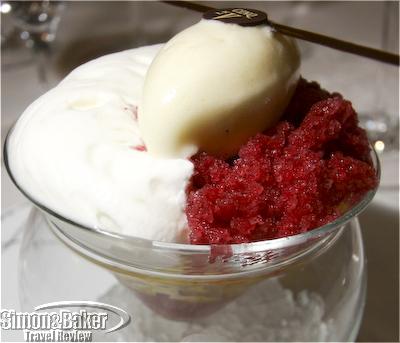