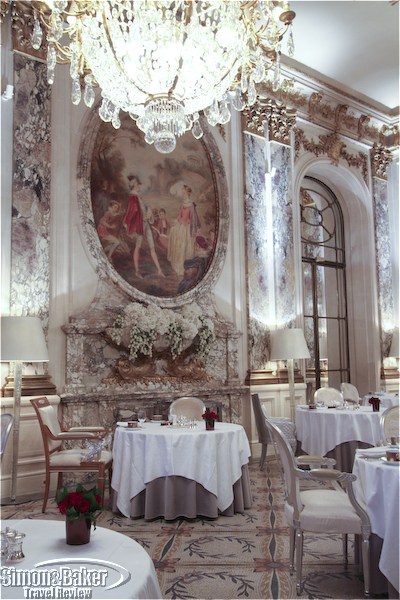 The elegant Le Meurice will be on our short list of fine dining options when staying at the hotel or celebrating a special occasion while in Paris in the future.


Overall Impression During a stay at the Hotel Le Meurice we had lunch at its eponymous lobby level gourmet restaurant. I had dined there with a friend years earlier and remembered the striking dining room and formal ambiance. In the intervening years the hotel had renovated the common areas and I was unsure what to expect. As soon as we entered the restaurant we took a liking to the opulent yet cozy dining room.

The room décor was grand Louis XVI style with modern touches and even on a cloudy day it was sunlit thanks to its window side location across the street from the famous Tuilerie Gardens. Our table in the center of the dining room was well positioned to admire our neighbors and the art filled room. Seventy percent of diners were repeat guests at the popular restaurant which was fully booked the Tuesday we dined there.

Our Terroir Menu with wine pairing was centered on ingredients produced in Paris and its environs. The setting was beautiful, the meal was pleasant and the service was outstanding. The elegant Le Meurice will be on our short list of fine dining options when staying at the hotel or celebrating a special occasion while in Paris in the future.

Handicapped Access Yes, the hotel welcomed handicapped guests. From the entrance to the hotel to the restaurant there was one single level.

Head Sommelier Estelle Touzet, originally from the Loire Valley, was in charge of a 30,000 bottle cellar and 1,100 references of the wine menu. In March 2008, she joined Le Meurice as assistant chef sommelier. By October 2010 she was appointed chef sommelier.

In her position she led a team of five. In addition to her duties at the hotel and restaurant she every month, the young wine expert hosted wine tastings at Les Nocturnes at the hotel’s Bar 228.

Location On the ground floor of the Hotel Le Meurice in the first arrondissement, in the heart of Paris.

Opened-Renovated The restaurant first opened in 1907. In December 2007, the décor of the restaurant, wine cellar and hutch was redone by Starck.

Pastry Chef Camille Lesecq, a native of Normandy, became the pastry chef at Le Meurice in 2004.

As a young man Lesecq was a frequent helper at his uncle’s pastry shop in Paris. In time the memories of the sweet and wafting aromas of this family shop drew him to a career as a pastry chef. He enrolled in the culinary school in Caen, completing his course of study in pastry and bakery in three rather than the usual four years.

His admiration for Christophe Felder, the pastry chef at the Hotel De Crillon for 15 years, emboldened him to approach Felder to seek a position with him. In 1999, he became second assistant in Felder’s team. By the time we visited the restaurant Lesecq had grown in his profession and managed a team of twelve in the kitchen of the Hotel Le Meurice.

Size The 153 square meter restaurant had a 6.30 meter tall ceiling. It could accommodate up to 42 guests and had a staff compliment of 50

About The Executive Chef In 2003, Yannick Alléno took the reins of Le Meurice. Working with a team of 74 staff in “the dream setting in which to exercise my passion” he set out to reinvent the venue’s gastronomic cuisine and earn his reputation. In February 2007, he achieved his goal of being recognized with the coveted three Michelin stars.

His efforts at the restaurant revolved around procuring local products and his thinking that “My cuisine is like my city, and my city is Paris.” Whenever possible his menu would take advantage of Parisian “terroir” options. According to hotel staff, the Ile de France area has more than 800 accredited producers and exceptional ingredients such as Milly La Forêt mint, Montmorency watercress and honey produced from the beehives on the roofs of the Paris Opera.

Born on December 1968 in Puteaux, the future chef rose quickly through the culinary ranks. Prior to working at Le Meurice he worked as chef de cuisine at the Hôtel Scribe, as chef adjoint de cuisine at Restaurant Drouant and as chef de partie at Hotel Meurice.

DÉCor-Ambiance Inspired by the Salon de la Paix at the Château de Versailles, the decoration of the restaurant Le Meurice was reinterpreted by Philippe Starck in 2007. The room was in a word, beautiful. The 17th century Grand Siècle style décor was based on three paintings dating from 1905 to 1907, the first phase of the refurbishment of Le Meurice since it opened, by Theophile Poilpot (1848-1915), a French Académie pompier style painter.

Highlights included a lovely signature plate designed to reflect the walls and the ceiling, Christophe silverware, Limoges dinnerware, Baccarat crystal, glass doors with gilding, antique mirrors and chandeliers, ivory silk lampshades, beech covered winged silver armchairs with silk cushions in ivory, bronze and marble accents as well as fresco paintings. The romantic elegance is at his highest peak when you look through the majestic windows to the Tuileries Garden.

The updated décor focused white, silver and the natural light streaming in through the windows that faced the Tuileries Garden. The Hutch, made of glass, mirror and polished stainless steel by Philippe Starck’s team, was the storage place for the restaurant’s dishes, glasses and cutlery.

Cellars Wine And Alcoholic Beverage Selection The restaurant had about one thousand different wines on offer. The oldest bottle was a Bordeaux Saint-Estèphe Château Cos d’Estournel dating back to 1928 and priced at 3,500 euros. The most expensive bottle was a relatively young Romanée-Conti Grand Cru Domaine de la Romanée Conti from 2003 that sold for 18,000 euros. We noticed while browsing the menu four champagnes by the glass as well as a handful of red and white wines by the glass. There was a good selection of champagnes including non vintage, vintage, and roses by the bottle starting at 130 euros and climbing to 3,600 euros.

Meal We began our lunch with palate teasers, two amouse bouche, a passion fruit wrapped around a bite of foie gras and asparagus with mousse to accompany our non vintage Bruno Paillard rose Champagne. One of the servers brought butter blended with apricot and dried fruit and ham butter and a small brioche. Fennel, olive, vanilla, crunchy baguette, poppy seed breads were on offer.

Next we had cheese, Camembert, Epoisses and Fourme d’Ambert. For dessert we had Puffed galete with roasted apple with ice cream served with sweet 2007 Tokaji Sargá Muskotály Chateau de Sarospatak (a favorite).

Special Menus The restaurant had a four course Terroir Parisien menu priced at 90 euros per person. There was also an eight course Degustation Menu priced at 240 euros.

Other During our stay at the hotel our favorite place for breakfast was Le Meurice. We enjoyed the early morning quiet of the elegant dining room with so many pretty touches like the silver service, dinnerware, table setting, and ceiling art. The a la carte menu items we sampled were outstanding and it was pleasurable to sit and read the English language newspaper with a hot beverage while relaxing in the striking only sparsely filled dining room.
Date Of Most Recent Visit 2011 2013

Service Staff were polite, formal, and attentive. They described the dishes and their ingredients as they served them, in English. Overall the service was impeccable. When we asked for a copy of the menu we were served that day they brought each of us a printed menu with a dedication by Chef Yannick Alléno. 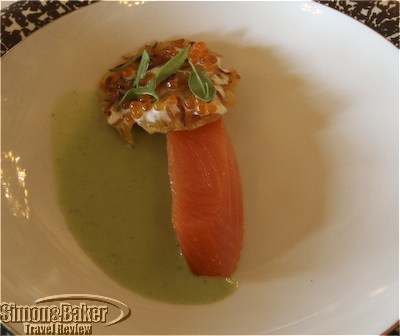 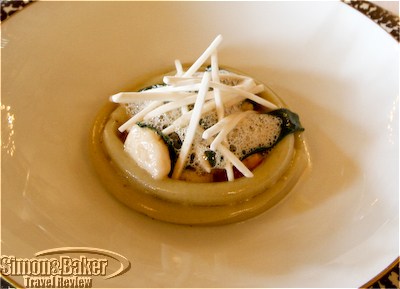 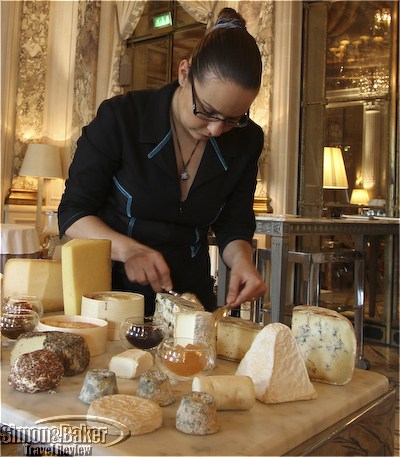