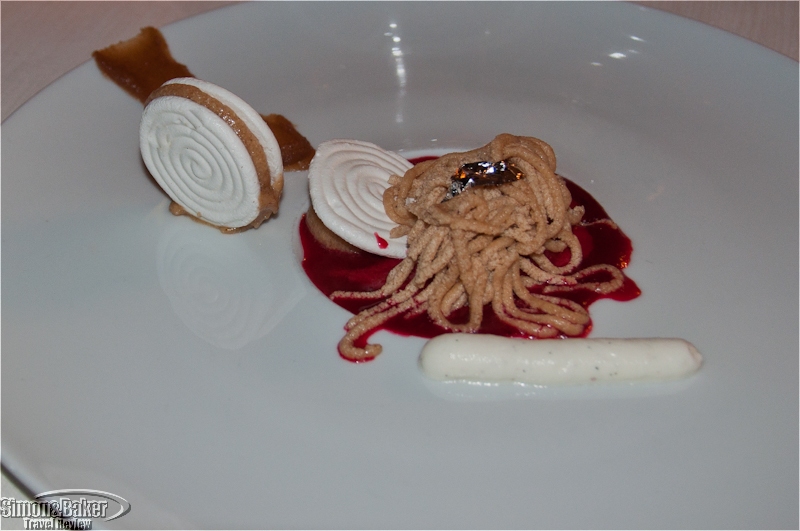 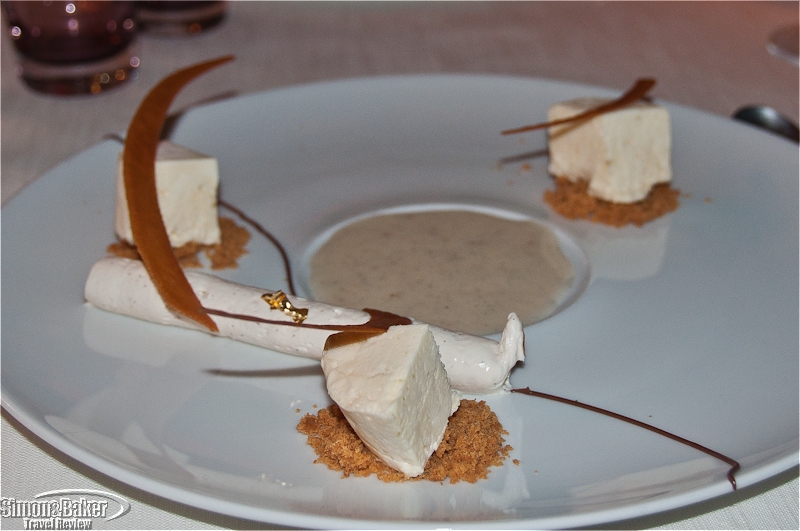 I intend to revisit and share it with Paris friends at the first opportunity, so that we can enjoy the rise of this virtuoso young chef.


Overall Impression Le Jardin des Violettes had it all: a secluded yet easily accessible bucolic setting, an inviting dining room, and the ultimate trump card, an outstanding young chef. Located within the Romantik Hotel and Spa Les Violettes at the edge the lush forested foothills of the Vosges Mountains, the restaurant overlooked the farmland of Alsace’s famed Route des Vins . Its spacious dining room was lined with broad picture windows and French doors that gave the room an airy atmosphere and let in the tranquil country vistas. In season, it opened onto a terrace and lawns that provided a lovely stage for al fresco dining. However, I especially enjoyed the room at night when the indirect lighting subdued by crimson silk shades bathed the space in a faint rosy glow. It enhanced the formal table settings and provided just the right touch of romance to showcase the exceptional cuisine of Chef Jérôme Jaeglé

“Discovering an inspired new chef is what finding a treasure must feel like,” my father, himself a respected chef in the grand French tradition, once told me. I knew halfway through the meal that I had just come across such a gem. Each dish rejoiced the eye and regaled the palate. Paté de foie gras came on a shimmering pool of herbed green tea jelly; red snapper skin was scored into thick julienne strips and caramelized crackling-style while the fillet beneath was cooked to delicate perfection. Cauliflower became a savory crumble; chestnuts discretely found their way into a wild mushroom duxelle ; I was smitten.

Chef Jaeglé’s imagination and his rigorous attention to detail permeated every mouthful; and his enthusiasm for sharing his art was infectious. When he came out of the kitchen at the end of the evening, it was not for a well-deserved victory lap but to exchange thoughts on our dining experience and share his vision. “I was drawn to the artistic side of the profession, the opportunity for creativity,” he confirmed as an answer to the ritual question of why he became a chef. The woodlands location of Les Violettes was heaven to him. “The forest shows us boundless generosity,” he enthused. A couple of mornings a week, he led his team on a foraging expedition for wild greens, mushrooms, herbs and berries. These along with the best and freshest products his nearby suppliers offer guided his inspiration for a menu that changed each month at most.

With Chef Jaeglé in the kitchen Le Jardin des Violettes delivered a compelling dining experience that for me elevated the restaurant to the status of destination onto itself. I intend to revisit and share it with Paris friends at the first opportunity, so that we can enjoy the rise of this virtuoso young chef.

About The Executive Chef The son of a local butcher and caterer and grandson a farmer, Jérôme Jaeglé knew early on that he was meant to be a chef. “I started handling knives at the age of nine,” he confided, “in the kitchen with my father.” Today, although still only in his early thirties, his exceptional professional credentials speak of a prodigy’s trajectory: chef at Jean Yves Schilinger (a Colmar culinary landmark) then at Christian Têtedoie in Lyon before taking the helm of Le Jardin des Violettes in early 2012. Meanwhile he still found time to stand out in some of the most respected French and international culinary competitions. A two-time winner of the National Taitinger Competition (in 2006 and 2008) and recipient of a bronze medal in the Paul Bocuse European Competition in 2010, he went on to take fourth place in the 2011 Bocuse Worldwide event. Today Chef Jaeglé delights in making the most of the exceptional rural location of Les Violettes. He lets the bounty of the restaurant’s forest surroundings as well as the seasonal availability of locally sourced products guide his creativity, using wild mushrooms and little known, commercially unavailable greens and herbs that lend his cuisine its unique cachet.

Location The Jardin des Violettes was located in The Romantik Hotel and Spa Les Violettes in Jungholtz, Alsace. It was 20 kilometers (12 miles) south of Mulhouse and 16 miles (25 kilometers) north of Colmar.

Size The dining room could sit a maximum of 70. The restaurant employed a staff of 10.

DÉCor-Ambiance The elegant dinning room was decorated in shades of cinnabar and taupe that gave the formal space a warm and cozy ambiance. Thick wall-to-wall carpeting, sound absorbing wall covering, velvet draperies on the large pictures windows and French doors all but eliminated ambient noise. Deep red silk shades on the ceiling chandeliers and candlestick lamps on narrow credenzas along the walls enhanced the intimate feel created by the generously spaced tables. The comfortable velvet-upholstered barrel chairs were an invitation to settle for a long, unhurried meal. Against the back wall, the recessed open kitchen allowed a glimpse at the wonders that were unfolding there, without commanding attention.
Cellars Wine And Alcoholic Beverage Selection The extensive wine list featured a wide selection of Alsatian wines as well as wines from other wine-growing regions of France. It offered a small selection of wines by the glass, including an excellent Crémant d’Alsace (the crisp sparkling wine of the area, which I especially enjoyed as an aperitif). A full selection of bar drinks was also available.

Meal We dined at Le Jardin des Violettes on two occasions, opting on the first night for the Menu Degustation (Tasting Menu). After an amuse-bouche of smoked trout and herbed goat-cheese roulade served with a freshly baked cheese wafer, the meal began with a generous nugget of paté de foie gras on a bed of green tea jelly, followed by a slab of Arctic char served rare, topped with a crumble of caramelized cauliflower and a side portion of a scrumptious cloud light bright green vegetable mousse that my friend and I were at a loss to identify. Chef Jaeglé later confided that it was a blend of ten locally harvested wild greens and herbs. Fillet of red snapper was next, its deeply scored skin grilled to a satisfying crunch, served on a bed of diced celeriac and chestnuts. The next course was a saddle of lamb, served precisely as ordered (medium rare), with roasted baby carrots and Ratte potatoes over a divine reduction of roasting juices. To enhance our meal, we selected (with the help of Alexandre, our knowledgeable young sommelier) a memorable bottle of Riesling Grand Cru Schlossberg 2010, Domaine Weinbach, Kaysersberg.

For our next meal, the last of an over-indulgent few days in Alsace, we begged Chef Jaeglé for “something light”. What followed was a sumptuous succession of surprises that included a mousseline of potatoes with walnut oil, garnished with oxalis (tiny wood sorrel leaves with a tangy, peppery taste), a mussels fricassée rich in saffron, served over a mousse of wild greens, and a cassolette (small casserole) filled with a medley of fragrant wild mushrooms still hinting of the woodlands from where they had been recently plucked. Nestled in the center of it, we discovered an egg softly poached in mushroom juices. Divine. Both nights dessert was a different variation of chestnut-based confections, one of my favorite fall treats.

Other Le Jardin des Violettes was recognized in 2012 with a Two Toques award from Gault et Millau. 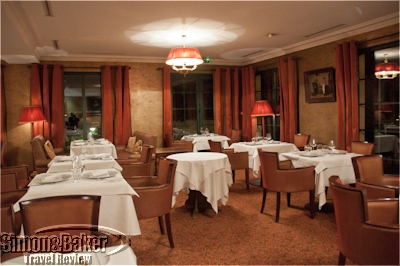 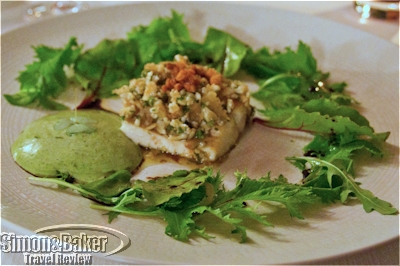 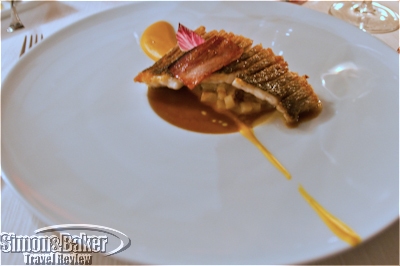 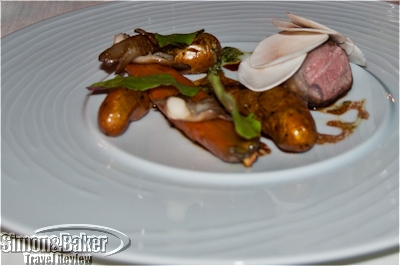 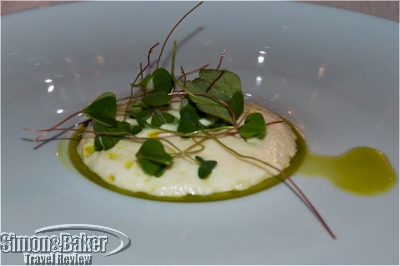 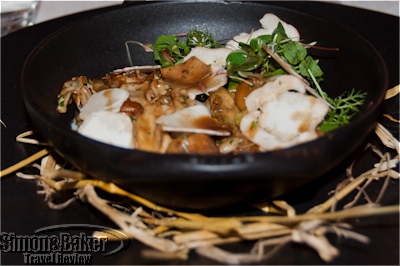 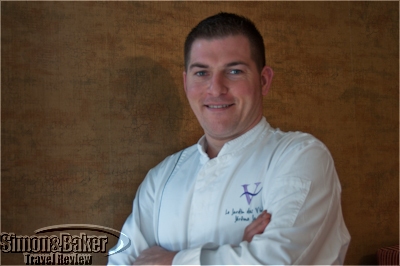 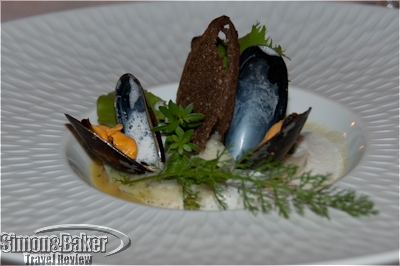 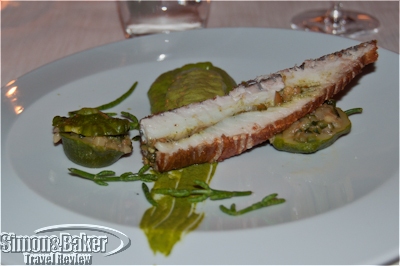