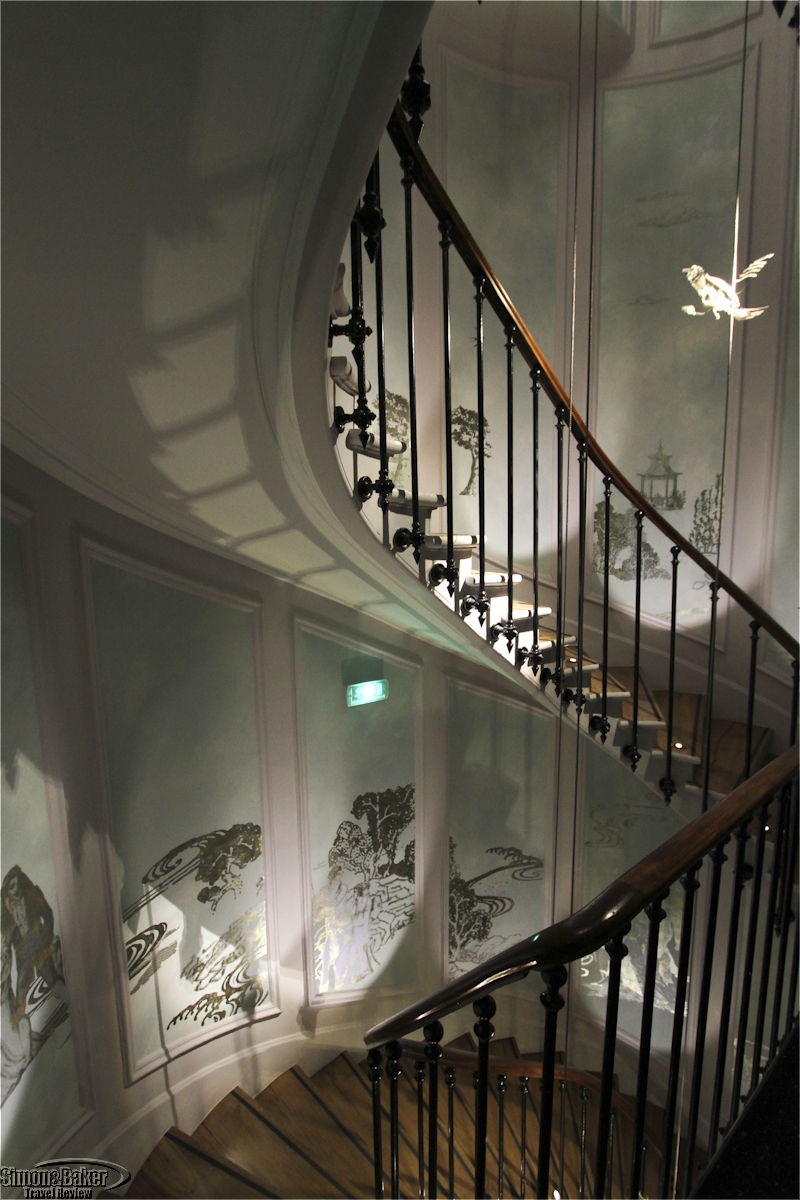 This was a winning jewel of a property where we would be pleased to stay again.


Overall Impression This new looking boutique property named for Juliette Récamier, a historic figure known “for her beauty and the way she used to welcome people in her salon,” had plenty of features to win us over. We loved the location on a quiet street in the city’s coveted Latin Quarter.

Our attractive rooms, while under 200 square feet in space, were stylish and comfortable with individual temperature controls and modern amenities including iMacs. Street facing windows with double curtains invited the winter light to brighten the rooms and make them seem larger. This was a winning jewel of a property where we would be pleased to stay again.

Children Babies two years old and children 12 years of age and older were welcome. The hotel did not offer family or interconnected rooms.

Connectivity There was complimentary WiFi everywhere in the hotel (no password or login were required). We also had access to the internet with the iMac in our rooms which was sometimes more convenient and quicker than pulling out our laptops or mobile devices and connecting to the internet.

Handicapped Access According to a spokesperson, the entire property was made for the comfort for people in wheelchairs. Two rooms were designed specifically to be handicapped accessible.

Lobby And Common Areas Great effort was spent on the décor of the property which was filled with allegorical symbols of various periods of the life of Juliette Recamier. According to A Walk with Juliette, a 54-page booklet sold at the hotel, each floor of the hotel was dedicated to an episode in Juliette Recamier’s life. Alan Bisotti of Hotels Paris Rive Gauche found documents, articles, books, and unusual items about or relating to the historic figure. There were portraits of Juliette spread across the property.

The interior of the property was designed by Ann Gelbard, a decorator known in France for Home Couture. Fireplaces added ambiance to the breakfast and bar areas. The hallways and dining room were chilly enough for a sweater. The common areas were pretty. In addition to a small elevator there were spiral wood stairs which we often used to make our way down from our rooms. The spa was meant to remind visitors of Juliette’s time in Italy.

Bathroom In each room, an enclosed toilet room was to one side of the entrance and a little past it across the entryway was the bathroom. In Room 303, the bathroom walls, bathtub and shower were covered in tiny black tile from floor to ceiling.

The bathrooms on the fourth floor were designed as an homage to the bathrooms of the Hotel Bourienne, a large private house in the ninth arrondissement of Paris. The bathroom in Room 408, had diamond shaped patterns of large beige and green marble; tiny beige and gold tiles on the upper half of the wall and in the bathtub and shower enclosure which had a handheld shower and a rain shower. Plastic curtains kept the water within the enclosure. The bottom half of the walls was covered by large ecru colored tiles. A single sink took up the rear of the bathroom. A built-in frameless mirror occupied the wall above the shower rounding the walls on either side.

Room We stayed in Room 303, a 198 square feet Superior Room on the third floor, dedicated to (Francois-Rene vicomte de) Chateaubriand for “ardor and serenity;” and Room 408, a 187 square feet fourth floor Superior Room dedicated to Causerie. Although the decorative elements and furnishings differed both had windows with a view onto narrow rue du Cherche-Midi. They also had built-in bed headboards and iMac computers. Narrow pull out drawers (awkward to use) housed French keyboards and wireless mice. Twin closets framed the comfortable queen beds. Each bed had four feather pillows and a blanket. An electronic safe and tiny refrigerator took up part of one closet; the other one housed white cotton bathrobes and matching plastic wrapped slippers with the hotel logo (like the bathroom linen). An electronic key opened the doors. It was necessary to insert it in a door side panel to turn on the light and temperature controls for the room.

In addition to the bed in the center with the built-in headboard, Room 303 had light gray walls, wood floors, recessed lights, two black and beige striped armchairs and a matching armless chair facing the table where the iMac was located with pull out drawer, keyboard and mouse. Instead of curtains there were pull down shades for the windows.

Room 408 had pale wood floors, walls with old style moldings in blue gray, tall ceilings, recessed lights, wall bed lamps, checkered burnt red and black double curtains, burgundy armchair and matching armless chair. A narrow lacquered wood table taken up mostly by the iMac computer, and its pull out drawer with wireless mouse and keyboard, occupied the side of the room opposite the foot of the bed.

Food And Restaurants A la carte breakfast was available in a ground floor dining room. The options were continental, healthy or Italian. The latter consisted of a large platter of delicious cold cuts. It was also possible to order a la carte.

One afternoon the lounge area adjacent to the breakfast room was closed for a private function so instead of ordering from the small items menu and snacking downstairs I requested an Italian cold cuts platter from room service. It was served with lettuce, one cherry tomato and four thin carrot slices. It arrived 10 minutes after I ordered it. The restaurant was scheduled to reopen at the beginning of 2014.

Facilities La Belle Juliette Spa and a dining room where breakfast and light snacks were served.

Fitness Center And Spa There was a basement level 80 square meter spa with a Turkish bath, unisex shower and a small swimming pool. Although the area was unstaffed there were plenty of towels and toiletries (shower caps, shampoo, body lotion, bathrobes, and slippers) and a blowdryer. To use the steam room, it was necessary to request in advance that someone at the front desk it turn on. I found no way to call from the spa to the front desk.

I enjoyed the spa during my stay at the hotel. At the end of a day of walking it was nice to swim a few minutes, and spend time in the steam room. It was one of my favorite features of the hotel.

Spa treatments required advance booking. I had the soothing Season Beauty Massage, the Claret Coquet Method. The Chinese influenced 75 minute treatment included argan oil with a seasonal blend designed to promote specific health benefits. There were five types of blends: spring or green, summer or pink, autumn or white, indian summer or yellow and winter or black. The spa manager who administered my treatment learned the therapy from a Lyon based woman who had studied acupuncture in Peking. After I completed a questionnaire she invited me to the treatment room where she began the soothing massage spreading argon oil with cistus essential oil over the entire body and face.

Pool The small swimming pool was 4 meters by 3 meters in size and about 1.5 meters deep. There were three lounge chairs in the pool area. There was a button in the pool that appeared to be for current generation. Colored lights added ambiance to the pool area.

Other The entrance was locked at midnight. There was a call button on the wall next to the door. As soon as we pressed it someone opened the doors for us. The hotel had received the TripAdvisor 2013 Travelers Choice. During the day, due to construction work in the adjacent building there was constant noise in my room. In my travel partner’s room, on the other side of the hotel from the construction, there was less noise from the work. At night, it was quiet. We had been informed of the construction work at the time of booking and were prepared for the noise which while annoying was not as bad as we had anticipated.
Cleanliness Very good. The rooms and common areas in general were spotless. There was some mold in the spa shower.

Service Our rooms were serviced twice daily. Staff we met spoke English, were friendly and willing to assist when we asked for help. Samantha, welcoming and kind, checked us in. Our luggage arrived in our respective rooms minutes after she showed us around.

At the front desk, Jean-Baptiste Chazelle and Guillaume Grangeon were especially service oriented. Jean-Baptiste helped us with restaurant reservations and a spa confirmation. In the dining room, Scidam Annasley Mamuhewa and Yohann Montes were attentive. Spa manager Priscilla Morain was well informed and pleasant. 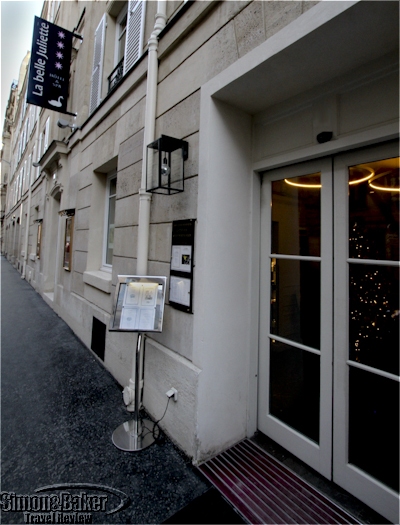 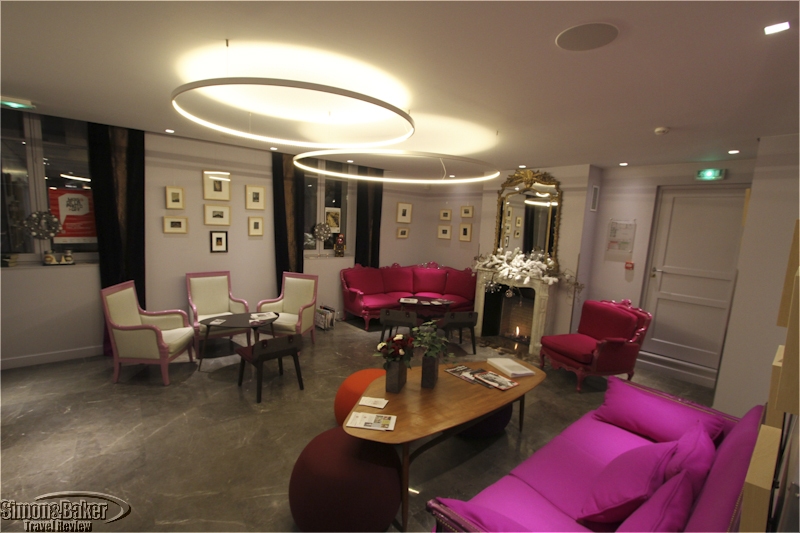 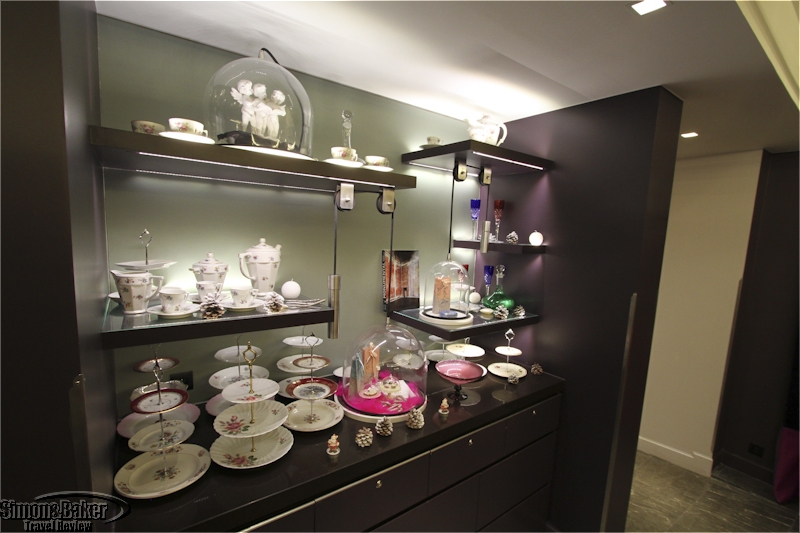 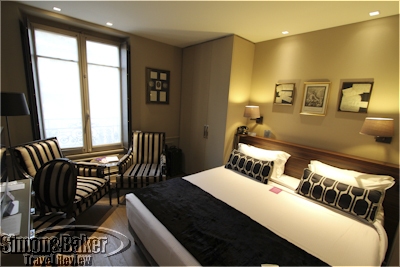 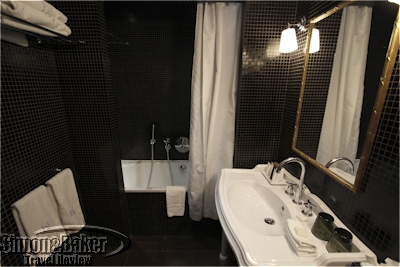 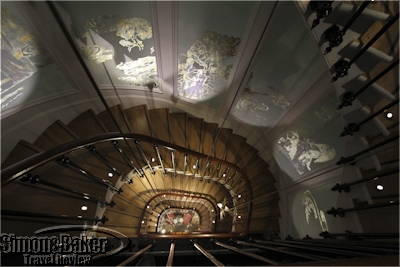 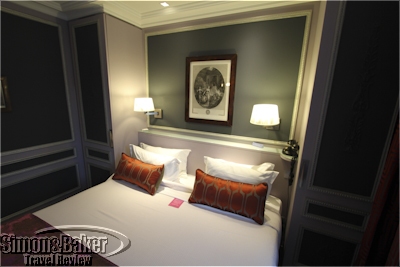 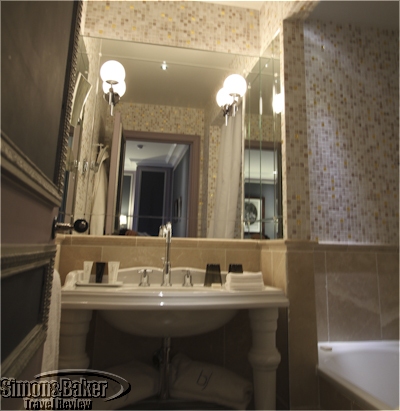 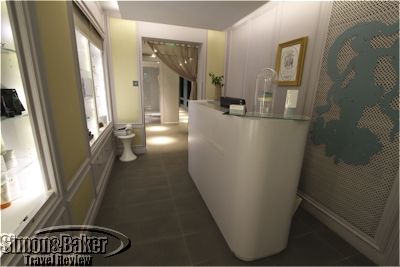 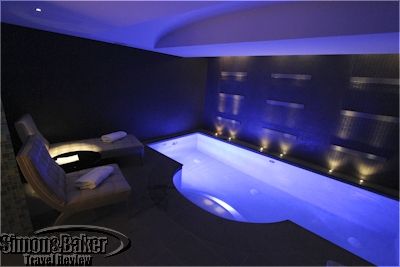 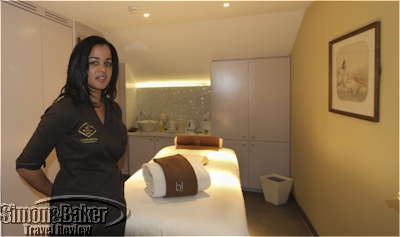 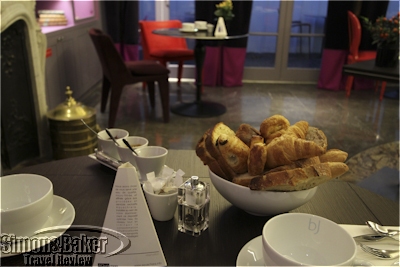 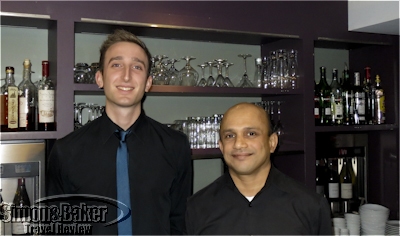 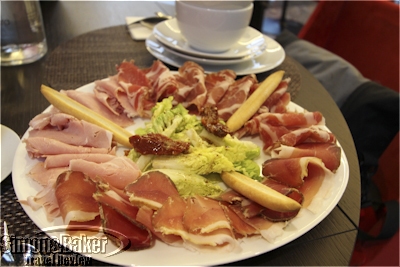 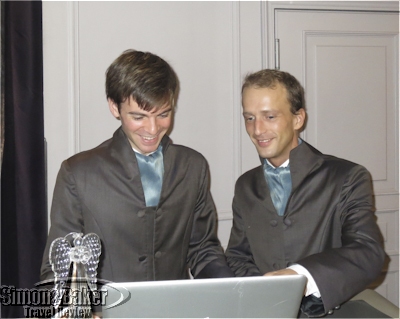 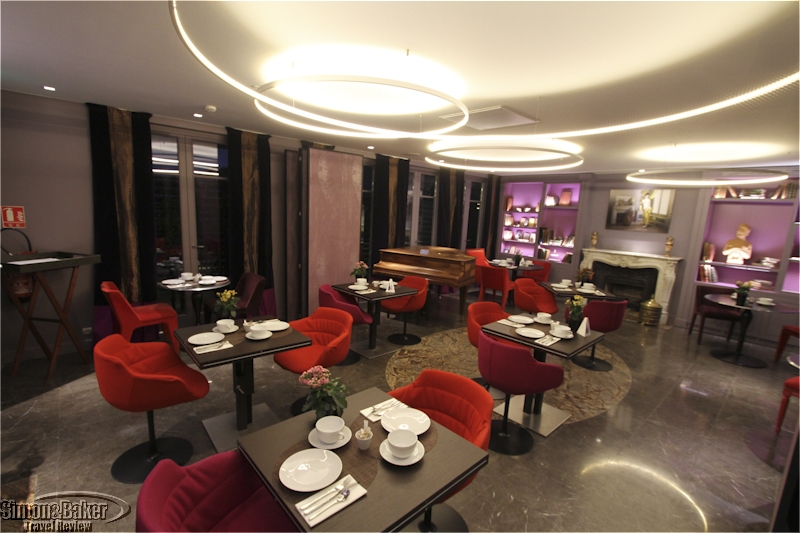 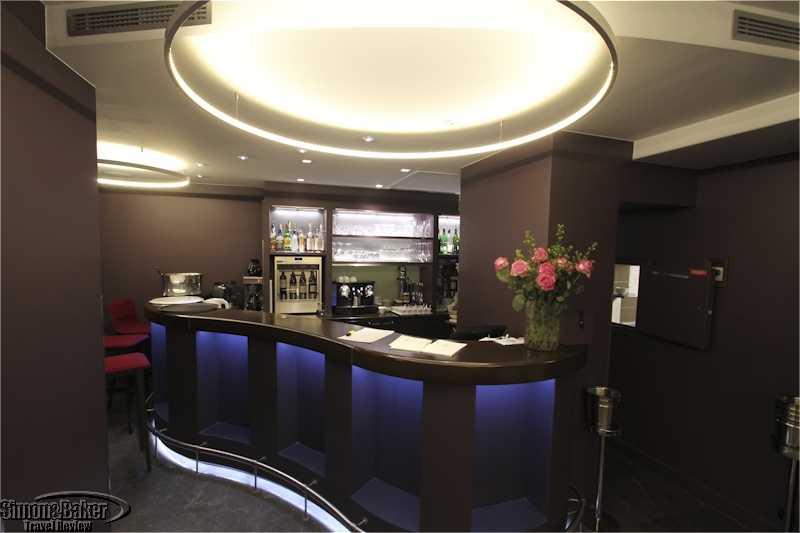 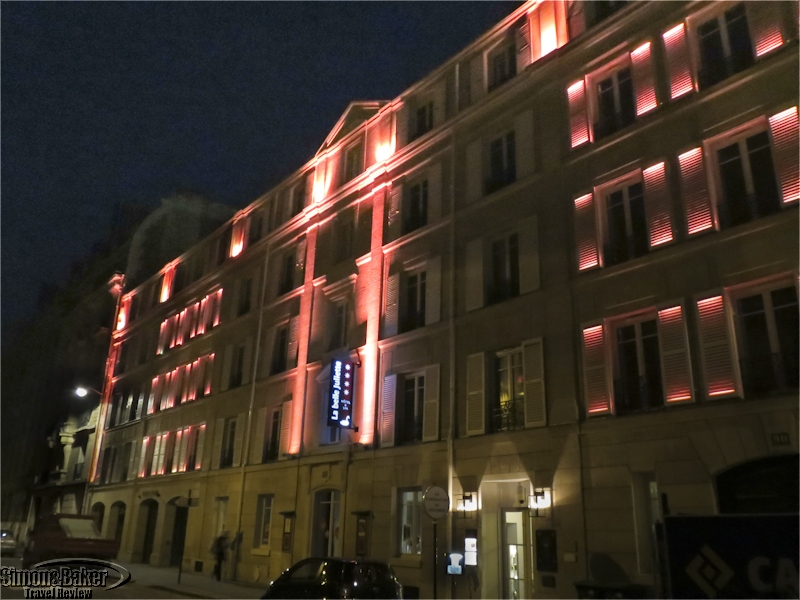