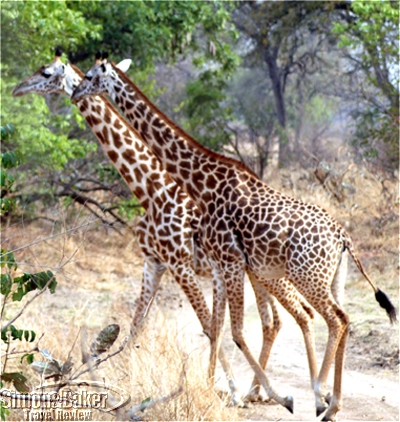 Tellingly, the majority of these guests were return visitors to Kuyenda.


Overall Impression It was already well into the evening when I arrived at Kuyenda, a remote bush camp in the South Luangwa National Park. It was my first destination in the park, at the end of a lengthy journey from the United States, and the start of my maiden safari. I immediately felt transported to a timeless Africa I had expected to be long vanished, other than in my imagination! The camp was nestled in a grove of giant trees, facing a grassy meadow that gently sloped down about three hundred feet to the edge of the Manzi River. It consisted of four spacious guest rondavels, traditional South African circular huts built entirely of local wood, reed and thatch. They were clustered around a thatch-roofed, open-wall dining and lounge area. The entire camp was bathed in the soft glow of oil lanterns, as was the long dinner table invitingly set at the edge of the dry riverbed. The darkness echoed with a rich cacophony of sounds that hinted at abundant wildlife nearby.

My anticipation was more than satisfied the next day, once I got over the disappointment of hearing that an elephant cow and her calf had visited the camp at length during the night, and I had slept through it all! During the course of my first three-hour morning excursion, I was able to view, often at very close range, over half of the varieties of game I had hoped to see during my entire visit; including several elephants, small herds of giraffes, zebras and buffalos, multiple varieties of gazelles, warthogs, crocodiles, mongooses, and birds too numerous to record.

But Kuyenda was more than a comfortable camp in a rustic setting, surrounded by spectacular scenery teaming with wild game. What made this bush camp truly unique was its host and guide, Phil Berry. A native of Great Britain, Phil was a passionate conservationist who had lived in the valley for over forty years. As Kuyenda’s host, Phil was a quintessential old-school English gentleman, self-effacing and thoughtful, who made each guest feel at ease and personally welcome. As a guide, he was widely acknowledged as the senior statesman of the Luangwa Valley. He was respected not only for his knowledge, but also for his meticulous record-keeping of the fauna and flora of the park, and as a noted rhino conservationist. I felt privileged to receive from him my first introduction to the breathtaking environment of the park.

During my stay, there were two to four other guests at any given time, each following their own itinerary between the various camps. Tellingly, the majority of these guests were return visitors to Kuyenda.

Location Kuyenda was located deep inside the South Luangwa National Park, on the bank of the Manzi River (a tributary of the Luangwa River), a two-hour drive from the Mfuwe entrance to the park.

Size Kuyenda had a three-acre footprint in the heart of the 3,500 square mile South Luangwa National Park. It could accommodate up to eight guests in its four chalets, as the rondavels were called, and employed a staff of eleven.

Transportation Mfuwe could be reached by air from Lusaka and Livingstone. Road transfers to and from the airport were arranged by the Bushcamp company, who owned and operated the camp.

Year Open-Renovated Originally opened in 1992, Kuyenda is closed and dismantled each November at the start of the rainy season. It is rebuilt prior to re-opening in May at the start of the dry season. Building materials and furniture are replaced or refurbished as needed at that time to ensure that the camp remains in perfect condition.

Common Areas The main dining and sitting area, including a small bar, was an open-walled structure under a thickly thatched roof. It was the starting point for all activities at the camp. The furniture was made of local mahogany, beautifully crafted and polished to a satin sheen. In the sitting area, sturdy folding lounge chairs of black canvas stretched on mahogany frames were gathered in a semi-circle around a large round coffee table. Cushions covered with local earth-tone batik and a patchwork wall-hanging completed the décor. Next to the bar, a small bookcase contained the camp’s library of reference books on the local flora and fauna.
Bathroom The private bathroom was next to the bedroom, following the outer curve of the rondavel for a quarter of its circumference. It was seven feet wide. The reed walls surrounding it were about eight feet tall. The floor was made of soft, neatly raked river sand. The whole bathroom was open to the sky, under the protective umbrella of a huge sausage tree. The bathroom had a mirrored vanity with a double sink, a flushing lavatory and a shower base made of flagstones set in concrete. There were ceramic pump bottles of biodegradable hair and body care products by the sinks and in the shower area, and four large dark green bath towels hanging on a bamboo rod within arm’s reach. Hot water for the shower was available on demand. It was delivered in a large overhead tank within minutes of request. However, when I visited at the end of the dry season, this service was superfluous. The air-temperature water available on an on-going basis provided a refreshing shower.

Room My chalet (Number Four) was a spacious rondavel, 23 feet in diameter. A comfortable king-size bed flanked by two bedside tables and swathed in mosquito netting was located in the center of the room. It was covered with a patchwork spread of local textiles. A large chest of drawers marked the foot of the bed. Two wooden chairs separated by a small table provided seating. Two storage chests and a tall laundry basket completed the décor. The concrete floor was covered by several brown and tan circular rugs of braided palm fronds. My chalet was the closest of the four guest rondavels to the common area, a mere twenty feet away. A six-foot high thatch fence ensured privacy. A solar lantern provided lighting in the evening, supplemented by two oil lamps.

Food Meals were timed to accommodate the scheduled game hikes and drives. The food was excellent, an imaginative fusion of western dishes and local ingredients. The three meals were served at the large common table in the dining area. An early morning continental breakfast buffet was served prior to the morning excursion. It had an unmistakable British flair, including freshly made hot porridge as well as home-baked bread and muffins, several types of jams, juice, coffee and tea. The hearty midday brunch was served family style. Dinner was around 8:30 pm, upon return from the evening game drive. It was plated and formally served. In addition to these three main meals, mid-morning tea and home made cookies were served during the morning hike. The sundowner break was a constant feature of the late afternoon excursion, with a choice of soft drinks, alcoholic beverages and light hors d’oeuvres.
Amenities Kuyenda amenities and services included daily laundry. A thermos of hot water was always available in the room, with a complete tea and instant coffee service. There were complimentary bottles of water, smoke coils and spay cans of insect repellent in the room. Freshly brewed coffee and tea, soft drinks, local beers and wines and other alcoholic beverages were available in the common areas. The daily wake up call was at 5:30 am. Along with it, a large basin of hot water was placed on a stand next to the front door of the chalet for early morning ablutions.
Game Viewing While at Kuyenda, I saw: elephant, lion, buffalo, hippo, Thornicroft’s giraffe, Crawshay’s zebra, warthog, spotted hyena, yellow baboon, vervet monkey, impala, puku, great kudu, bushbuck, civet, genet, banded mongoose, bushy-tailed mongoose, slender mongoose, porcupine, elephant shrew and Nile crocodile. Bird sightings included: yellow-billed stork, saddle-billed stork, grey heron, grand hornbill, crested crane, red-billed ox pecker, Cape turtledove, red-billed buffalo weaver, blue waxbill, bateleur eagle, fish eagle, tawny eagle, African hoopoe, lilac-breasted roller, hamerkop, carmine bee-eater, red-necked francolin, Lillian’s lovebird and grey lourie.
Activities Kuyenda offered early morning and sunset game walks, as well as evening game drives in an open-top all-wheel drive vehicle, using a powerful spotlight for an excellent view of nocturnal animals. Morning and sunset drives could be substituted for the walks by consensus among the guests. In addition to our guide Phil, all excursions were accompanied by one armed ranger and one assistant carrying a large backpack (if on foot) with bottled water as well as the beverages and snacks.
Other Due to the proximity to wild game, children had to be at least 12 years old to visit the camp.

While there was no electricity in the chalets, portable solar panels outside the common area provided sufficient electricity to recharge camera batteries.

Service Discretely attentive, friendly, and overall excellent. The staff never failed to be on hand with a warm smile, chilled towels and glasses of cool fruit juice to greet the arrival of the Land Rover, whether it brought arriving guests or returned from an excursion. The room was serviced twice a day. Any laundry left in the basket in the morning was returned freshly laundered and ironed in the evening. 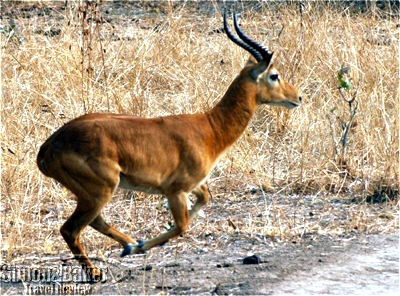 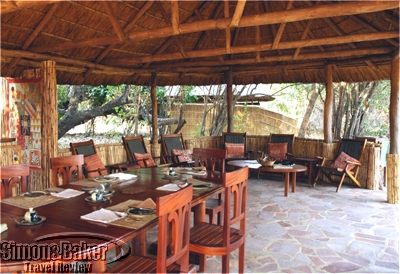 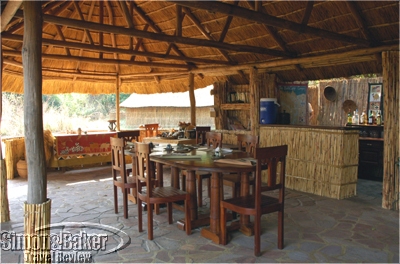 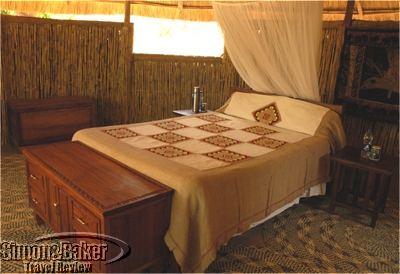 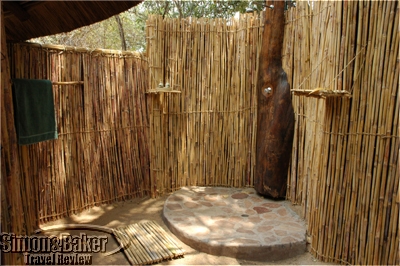 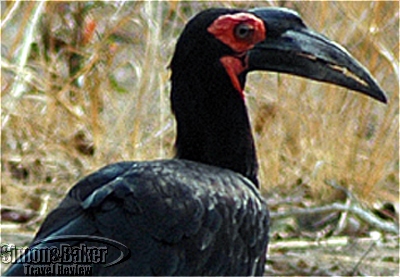 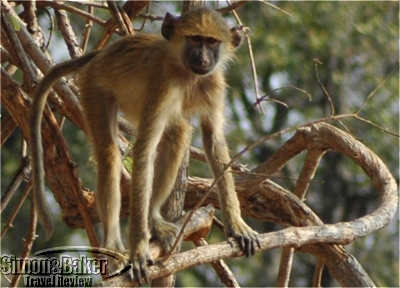 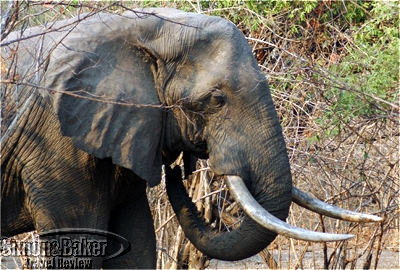 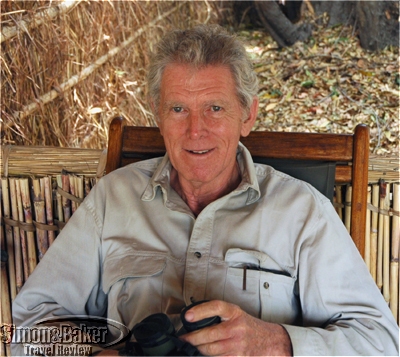