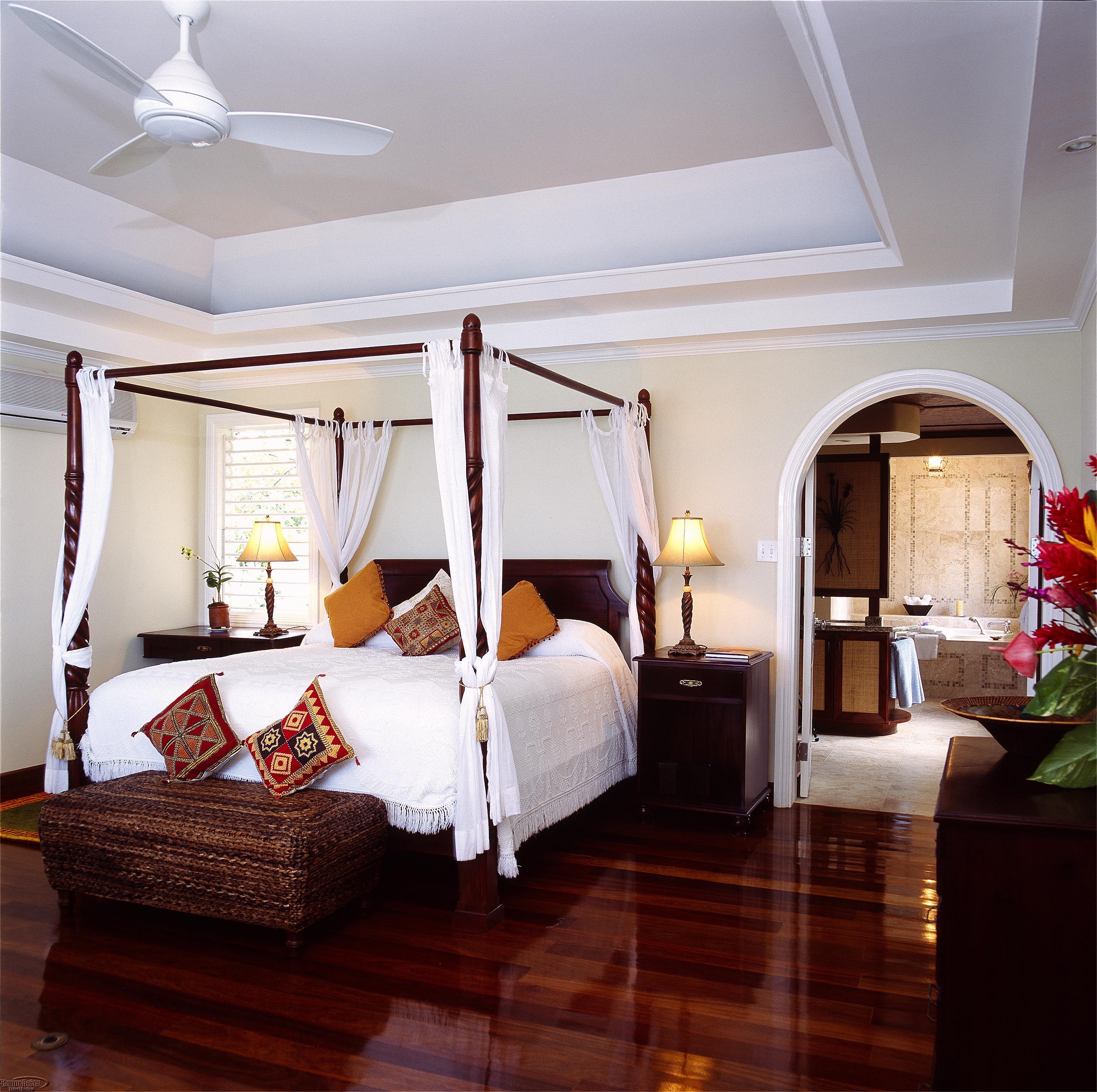 It was there that we longed to be whenever we weren’t drawn away on some seemingly essential errand.


Overall Impression When we arrived at the Jamaica Inn by boat, the most notable feature was its bright blue color and white trim. After braving the gentle waves that lapped against the shore and climbing a few short steps toward the entrance, we were greeted by Nicole and Terri, two of the hotel staff members. Slowly, as we walked from the jetty through the dining terrace past the bar and library common room, we delighted in its understated grace and quiet. The staff exuded friendly warmth and a welcoming attitude making us feel like we had been there before and were returning after a long absence instead of visiting for the first time.

Our waterside suite was marvelous. It had that too rare combination of function and style. Decorated in warm soothing shades of rust and ochre on a cooling white background, it offered plenty of space for two to spend the day in comfort. The best part of all was the fabulous wide water facing terrace peppered with comfortable furniture. It was there that we longed to be whenever we weren’t drawn away on some seemingly essential errand.

Connectivity Complimentary high speed Internet connectivity was available in the library through a hotel computer and via WiFi in the lobby-bar area. Because our computer was not equipped for WiFi connectivity, we used the hotel’s computer to pick up emails. It was difficult gaining access to the computer. Nearly every time we tried to collect emails, someone was already seated at the computer and we had to wait or return. The next time if we have to remain connected during our visit, we will bring a WiFi capable computer.

Opened-Renovated It was established in 1950. Every year, the hotel renovates various parts of the property during the low season. Our suite was built in December 2004.

DÉCor And Common Areas There were more than 100 antiques (many of them 200 years old) throughout the property, which was decorated in a “casual elegant” style with wood and cloth furniture. Our suite was designed by Katherine May and Tammy McConnell who also designed Cottage 3.
Our Bathroom The bathroom area was spacious and luxuriant with indoor and outdoor showers, an indoor garden, a separate oversized bathtub and double sinks set in a large wood, wicker and granite custom made centerpiece. An enclosed water closet offered privacy. There was ample closet space and a safe behind wood and wicker doors nearly the width of the room. We especially enjoyed the outdoor shower, situated in a large walled garden area adjacent to the bathroom, and its ocean view.
Our Room Located a short walk (two city blocks) from the main area of the Inn , our new looking 2012 square foot (including the terrace) suite (Cottage 4) was inviting and comfortable. The entrance was a small garden, where we identified nine varieties of flower, designed by local gardening enthusiast Denice McConnell (owner of Amanoca). Before reaching the double front doors we discovered an alluring ocean view. Inside, there was a full size living area with a white cloth love seat facing the rear, a small wood table with a lamp on either side of the loveseat, a wicker and wood chair on each side and a wood table in the middle. The east wall was rust colored and featured an oil painting depicting green bananas over an island landscape. A granite counter spanned the length of the wall. There was a sink to one side, a hot water jug, an orchid and fresh flowers in a vase. The floor was of cool beige marble with a rectangular blue rug in the center. There were full-length white curtains framing the double glass doors that led to the rear terrace.

Adjacent to the living area, there was a bedroom with a water facing four poster wood frame bed and a night table with a lamp on either side of the bed. A cordless phone sat on one of the night tables. There was also a wicker table at the foot of the bed and a wooden dresser with a portable jWin radio/CD player to one side. Two large comfy cloth chairs facing the water, one with a foot rest, sat in front of the bed. There was a round wood table between them and white curtains identical to the ones in the living area framed the twin glass doors that led to the terrace. The South American hardwood (custom cut cumaru) floor was well polished and felt smooth on our bare feet. There was a yellow rug in the center and a smaller rug on one side of the bed. A large oil painting of a beach and boat by W. Clarke was centered on the west wall. There was an air conditioning unit and a ceiling fan in the living room and another set in the bedroom.

Meals And Restaurant Our first night we attended the manager’s cocktail party (casual elegant attire suggested) followed by a beach buffet. Toes in the sand, near full moon in the sky, a bonfire and Jamaican band playing and singing in the background, we would have been happy even without dinner. Luckily, there was a selection of hot and cold dishes from the buffet including jerk pork, chicken, fish, shrimp, potatoes, vanilla corn, several salads and dessert.

The following morning, we decided to laze and have an in-room breakfast. Because we made the decision after the 5 a.m. cutoff time, we had to hand carry our selection sheet to the guard stationed near our area of the Inn . A couple of hours later a kind server brought our order which included cereal, hot tea, a breadbasket (including especially nice toast) with butter and two kinds of jam and a cold cut platter. It was served on a tablecloth and cloth napkins on the terrace with Word cutlery and Steelite dinnerware.

Beach The hotel centerpiece was a short and wide beach with a buoy line marking the safe swimming range and a lifeguard during the day. Hot sugary sand and tropical waters framed the inviting beach. There were plenty of comfortable wood lounge chairs with cushions and some under thatched cover offering guests a place to relax in the sun or shade.

Spa My massage, a Holistic Relaxation, took place in the Sea Spray Hut, an oceanfront treatment room so close to the water guests were sometimes splashed by the spray of the surf crashing against the shore. The Kiyara staff were welcoming. The quaint waterside open style spa with an emphasis on “balance through nature” was built with indigenous materials. Spa manager and holistic practitioner (self taught herb enthusiast who blends her own spa mixtures) Carolyn Jobson performed the massage with firm soothing hands. It was a treat to relax so near to the sounds of the surf.

Activities On-site options included boat rides ($35 per person for a 2-hour ride to nearby Dunn’s River and Laughing Waters), snorkeling, kayaking, playing croquet, going on a sunfish. For those in search of things to do, there were numerous possibilities including complimentary tennis.
Other During our stay we met I’nI, the hotel ’s English cocker spaniel mascot, a gentle and charming one year old who befriended us. There was a focus on adult guests since the Inn only welcomed children 10 (12 during the high season) and older. Plans for 2005 included a new gym and an upgraded toiletry line.

Service The staff were friendly, helpful, efficient, speedy, accommodating and unobtrusive. We mentioned a plumbing problem in the bathroom to the manager. Within two hours of our conversation someone repaired it with minimum fuss.

Would You Return To This Property? Yes 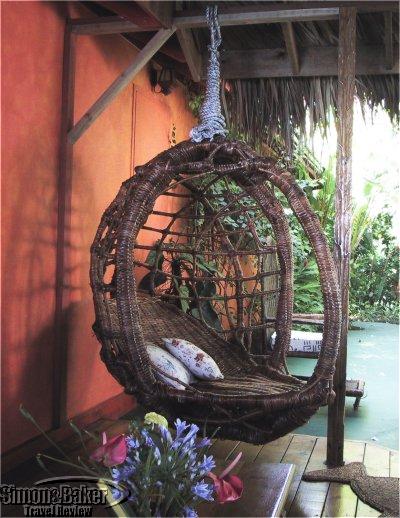 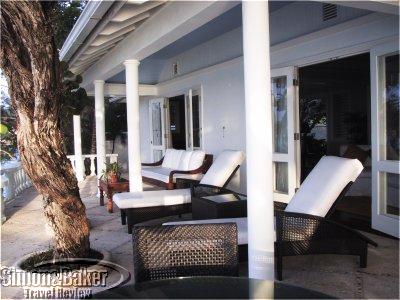 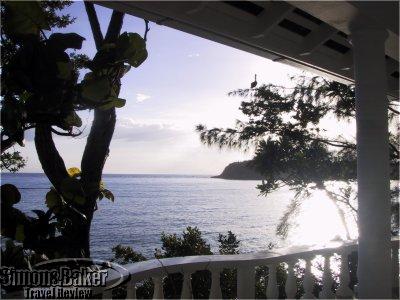 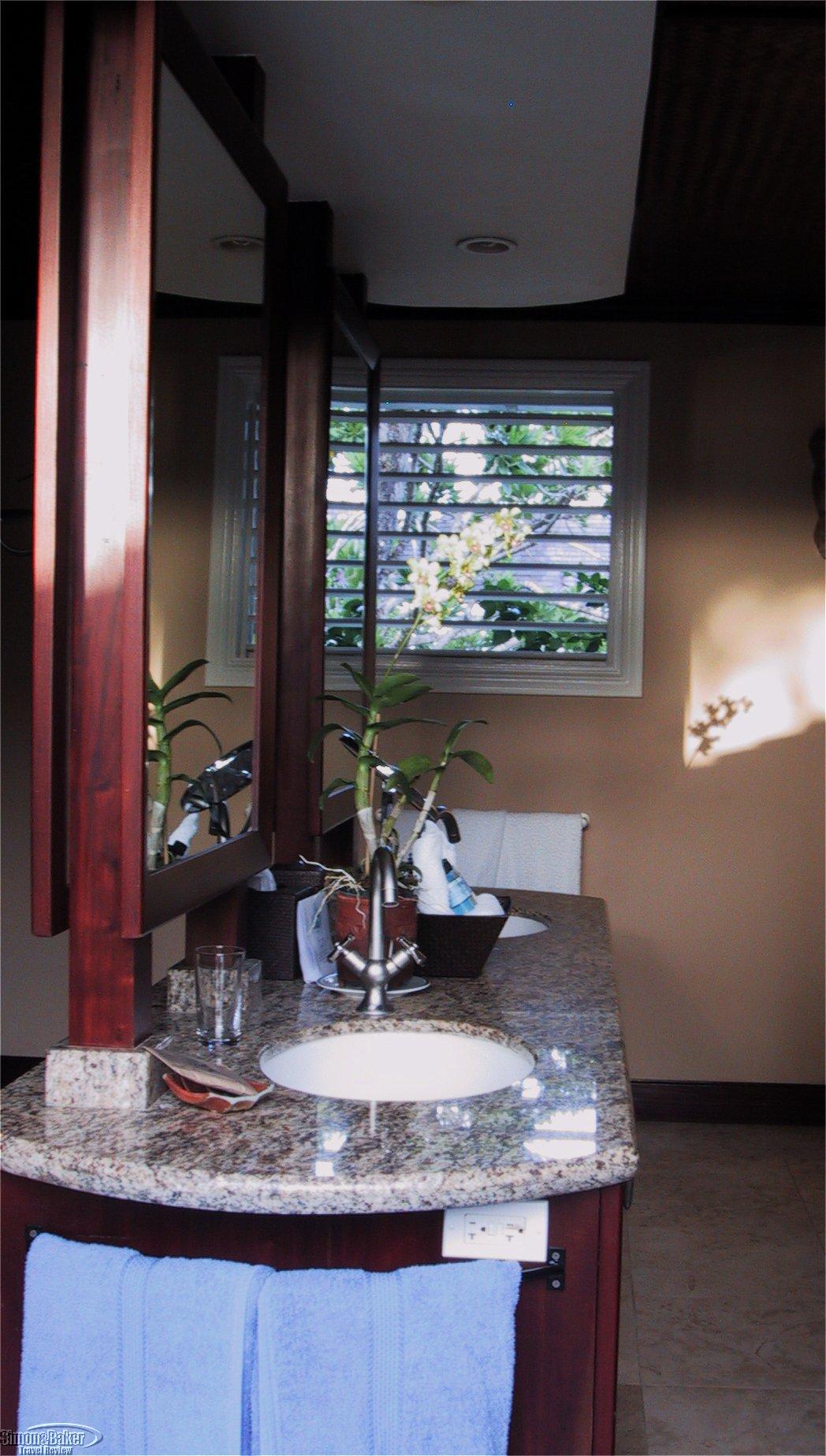 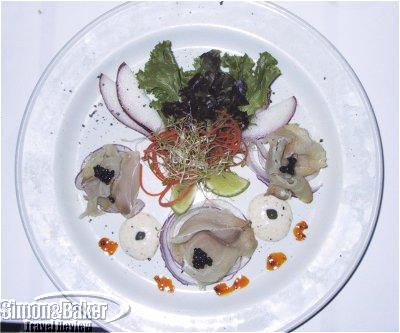 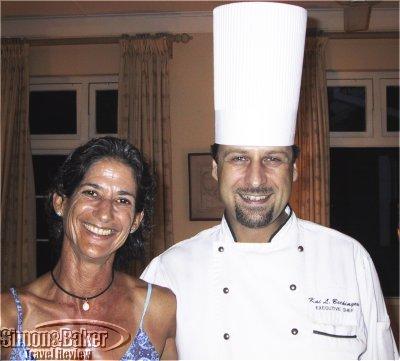 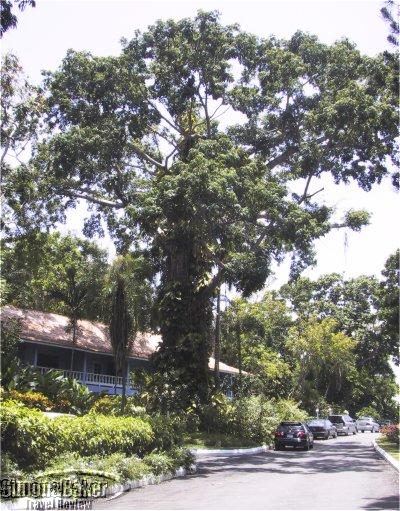 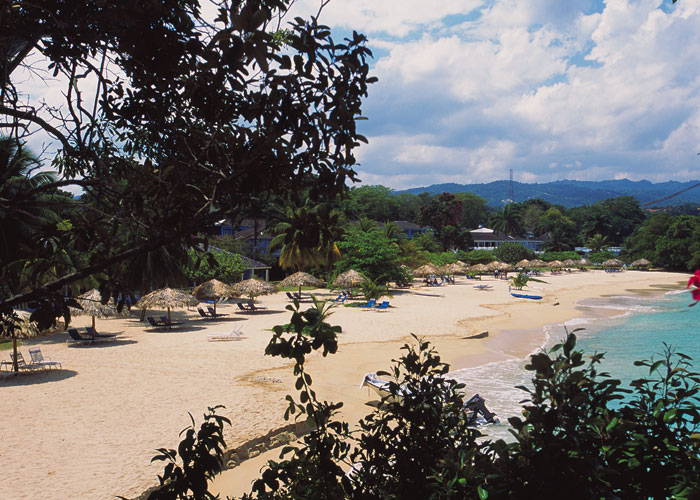