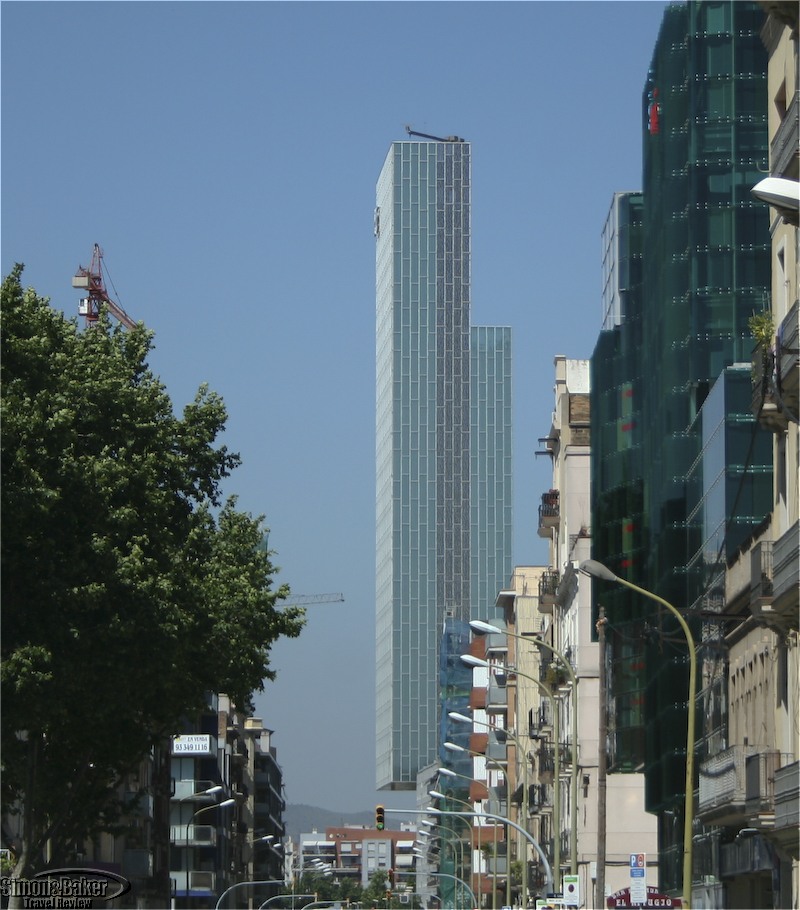 The hip and stylish hotel’s friendly and welcoming staff made it a safe haven to return to after a long day sightseeing in Barcelona and the Catalonia Region.


Overall Impression This trendy hotel, part of the large Sol Meliá chain, was located in a 37 story tower building. Its target audience were luxury oriented travelers, especially celebrities and those with a penchant for music, design and gourmet meals. It had a penthouse VIP lounge (a favorite) for Level upper floor guests, meeting space, two restaurants, nightclub, pool area, fitness center and spa. The name Me was designed to convey that Me equals you “because Me becomes you.”

My favorite feature at the Me Barcelona hotel was the panoramic view of the city and its environs from my seventeenth floor room. I liked the large and comfortable bed with a city view and bedside electronic light controls.

The Level Lounge on the top floor was my favorite area of the hotel. I enjoyed breakfast there and took advantage of the facilities and amenities whenever there was an opportunity to meet colleagues or just for a short while to enjoy the stunning city views. The hip and stylish hotel’s friendly and welcoming staff made it a safe haven to return to after a long day sightseeing in Barcelona and the Catalonia Region.

Connectivity There was WiFi connectivity in my room. At times the service worked well and other times it was so sluggish as to be useless.

Handicapped Access There were four rooms for disabled guests.

Location The hotel was in the Plobenou District, part of the 22” Area, an urban business district within walking distance of Barcelona Beach and the well known Avenida Diagonal. The hotel is between the Glories Plaza and the Forum area. The City Center was one subway stop away and Gothic Quarter was five subway stops away.

Pets Allowed The hotel welcomed pets of up to 10 kilograms except in public food and beverage areas. Pets were required to be under control all times.

Lobby And Common Areas The building’s architectural design was by Dominique Perrault, a French architect known for his work at the Bibliothèque Nationale de France building in Paris. The exterior was meant to be slim, reflecting the light and movement of the city during the day; and serve as a symbol of technology.

The interior of the 120 meter tall hotel was designed, by Corada Figueras Arquitectos, to be contemporary, hip, welcoming and unique. The street level entrance led to a reception area on the left and a lobby on the right. Colorful and comfortable furnishings populated the lobby which had high ceilings and a spacious ambiance. At the back of the room there was a bar. Behind it was Dos, one of two hotel restaurants (where we had a buffet breakfast one morning and dinner one night). From the lobby elevators, slow at times, led to guest floors, meeting rooms and common areas including fitness center, spa, nightclub and pool areas.

Bathroom To the left of the entrance there was a doorless rectangular bathroom area with a closet on one side adjacent to a large shower (they shared a door so when the closet was closed the shower was open and vice versa). There was white flooring and white and black lacquered walls. There was an electronic safe in the closet, a folded black bathrobe and matching black slippers. Across from the closet there was a small storage cubby hole in pale wood with a square mirror. Next to it there was a built-in beige Corian counter with twin sinks and above it the glass wall facing the bedroom, a vanity mirror and a movable mirror. In the left corner, next to the shower, there was a water closet. Inside the large shower space there were hand held and rain shower heads.
Room I stayed in Room 1707 on the seventeenth floor. The modern city facing room was 30 square meters in size. From my oversize window I had a view of a nearby city park (where there was a concert the Sunday afternoon I arrived) and a construction site for a tower next door, and the city in the background with the Sagrada Familia and Tibidau hill within view. The first feature I noticed in the room was its high gloss polymer white resin floor.

There was a fuchsia and orange, with blue and grey trim, area rug in the middle. Some walls were white and some were lacquered and there was a high ceiling. A king bed, framed by night table openings built into the wall, was in the center of the room. It had a fluffy mattress with a double duvet (under and above the sheets), making the bed particularly comfortable.

The bed faced a Sony flatscreen television and lounge chair in the corner and a floor to ceiling partial glass wall offering beautiful city views. A bright red lacquer rectangular long table with a glass top was set against the wall below a large blue photo. A silver minibar with items on sale took up the corner next to the table and the window. It had cold beverages inside and an assortment of snacks on top including canned olives, Love Me Tender (condom, lubricant, vibrating ring), nuts, chocolates, potato chips and crackers.

A brown wall with a large window in the middle divided the sleeping area from the bathroom, allowing me to see into the bathroom from the bedroom and vice versa. Just past the entrance door, to the right, there was a control stand for light switches and digital air temperature controls (the temperature controls didn’t seem to work regardless of the temperature I selected; I heard colleagues complain of a similar issue in their rooms). A similar stand for power cords was next to the mini bar.

The day I arrived loud sounds carried into my from from a concert at a nearby urban park. I could hear very loud sounds from the hallway. When staff were cleaning the neighboring rooms I could hear loudly the sounds of the vacuum cleaner, their movements and conversation.

There were light and curtain controls by the night table. The lights in the room were limited, making the light ambiance muted, especially at night. There was one bright light on the desk, one small lamp over the lounger and small reading lamps over the bed and headboard area.

There was an Extreme Mac iPod docking station on one of the night tables. I borrowed a loaner iPod charged with music from reception (had to provide a guarantee).

Food And Restaurants Whenever possible I preferred to have self service breakfast in the penthouse lounge. Although there were fewer choices than in the main dining room and no hot dishes, it was always quiet and the view in the early morning was breathtaking. Breakfast selections included four types of local deli meats, four types of cheese, three types of bread, several kinds of pastries, two types of cereal, two types and several flavors of yogurt, two flavors of juice, Nespresso coffee and a variety of teas (although boiling water was hard to come by in the top floor lounge). There was usually a sliced fruit platter usually with pineapple, watermelon, strawberries. In the main dining area, breakfast was buffet style and included the above offerings in larger quantities as well as hot dishes and eggs. Very busy staff brought hot beverages to the table.

The Torres brothers managed the two hotel restaurants. We dined at Dos, a ground level informal restaurant specializing in Mediterranean and Catalan homestyle cuisine with a modern touch.

Amenities There were 30 milliliter plastic bottles of Aveda rosemary conditioner, hydrating lotion and refreshing mint mouthwash by the sink. In the shower there were 30 milliliter plastic bottles of Aveda energizing body cleanser and rosemary mint shampoo. There were two phones, one in the bathroom and one on the night stand. There was a blowdryer and a vanity mirror in the bathroom. There was a Sony iPod doc in the bedroom. At turndown the staff brought heart shaped lollipops. One of the Level guest amenities was pressing service for three items on arrival and one per day after that.

Fitness Center And Spa The fitness center and YHI spa were next to each other on the fifth floor. The fitness room was 37.14 square meters large and housed seven Life Fitness machines. The spa was 363 square meters in size.

Pool The sixth floor swimming pool was 52 square meters in size and 1.5 meter deep. There were lounge chairs and cabana style seating in the pool deck.

Other The Me line was launched by Sol Meliá (a large Spanish hotel chain with 300 properties in 27 countries) in 2006 to offer accommodations emphasizing design, music and gourmet features. The Me Barcelona hotel was the fourth hotel in the Me line following the launch of properties in Madrid and two in Mexico, one in Cancun and another in Cabo San Lucas. Plans were in place for additional Me properties in London in 2012 and Vienna in 2013.

As Level guests we were invited to take advantage of the facilities on The Level Lounge where breakfast and snacks were served and there was a superb view of the city. The Me Barcelona was named to the 2009 Conde Nast hot list.

Cleanliness Very good (my bath robe had an unpleasant odor and the shower floor was dirty or stained).

Service The room was serviced twice daily; during the day it was cleaned and at night there was turndown service. There was a personalized welcome message in the bathroom mirror when I arrived. The service was at times friendly and helpful and other times hard to reach and inefficient. For example, I requested pressing service and found an ironing board and iron in my room on my return that night. On the other hand when I requested a loaner iPod a staff member arrived within five minutes of my call, installed the iPod very quickly, started it playing and left within minutes of arriving. The security guards (dressed casually) at the entrance (Omar and Harold) were unfailingly friendly and helpful.The couple of times I approached reception desk staff they were friendly and responded efficiently. The staff in the penthouse lounge including Roni, Chatni and Samara (most of the ones I met were interns) were also friendly and went out of their way to assist me. On more than one occasion I called reception and there was no answer. 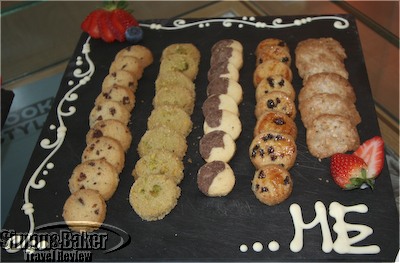 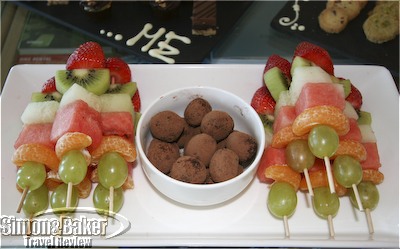 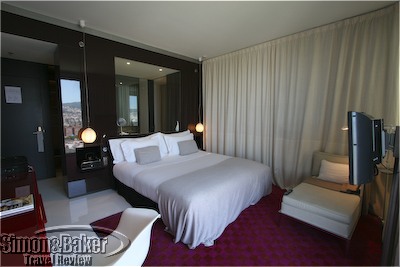 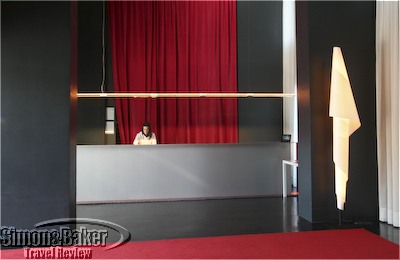 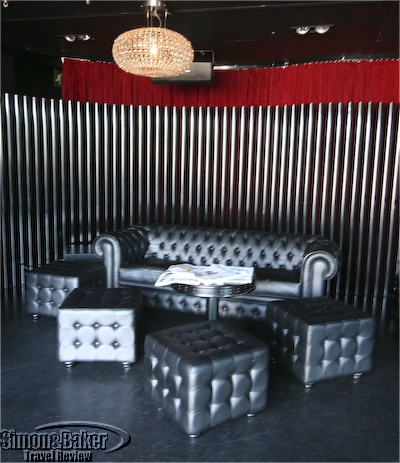 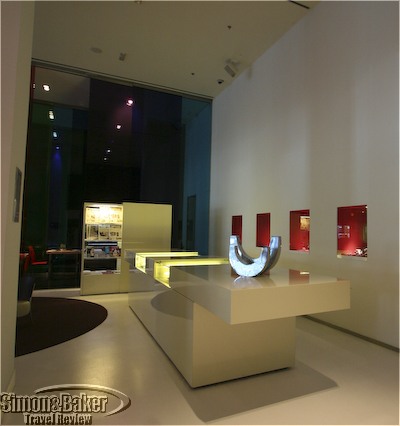 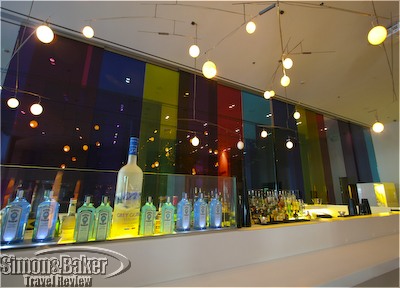 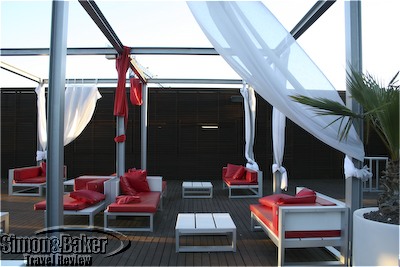 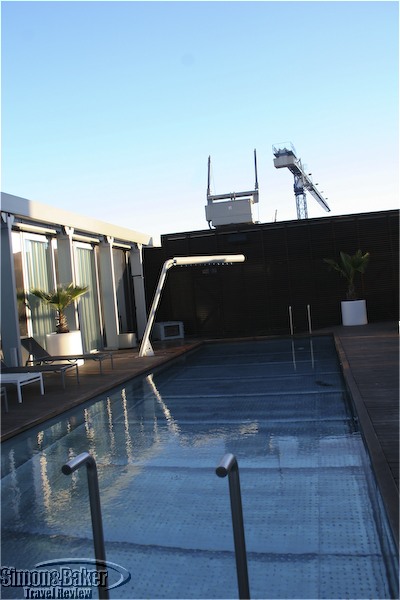 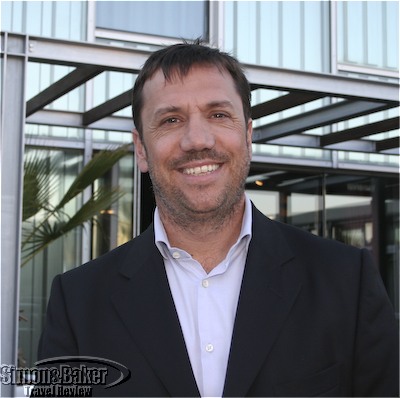 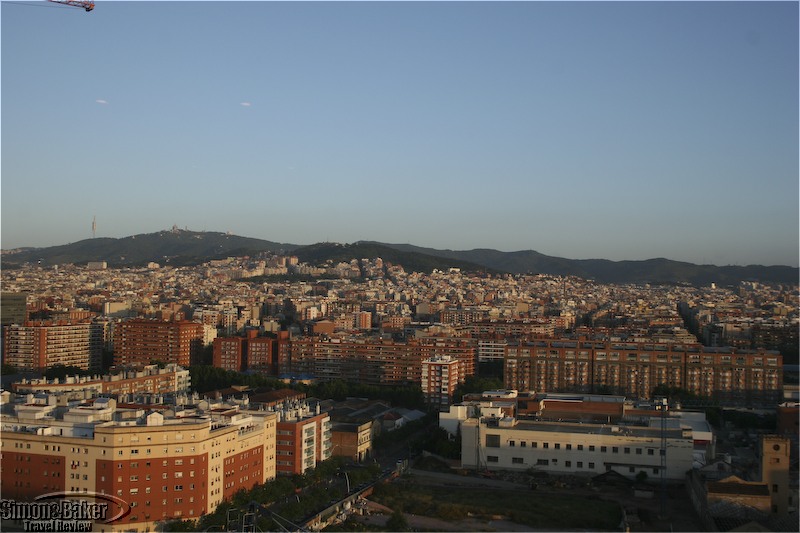