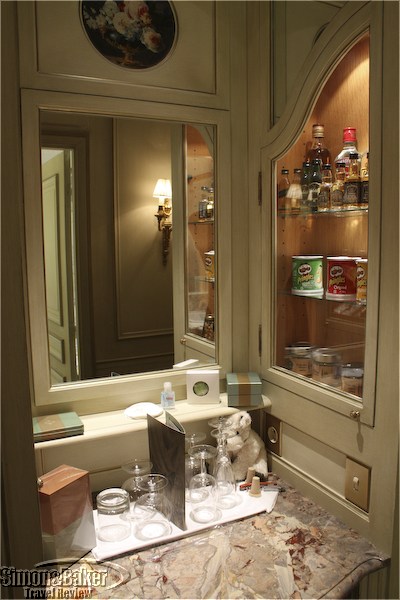 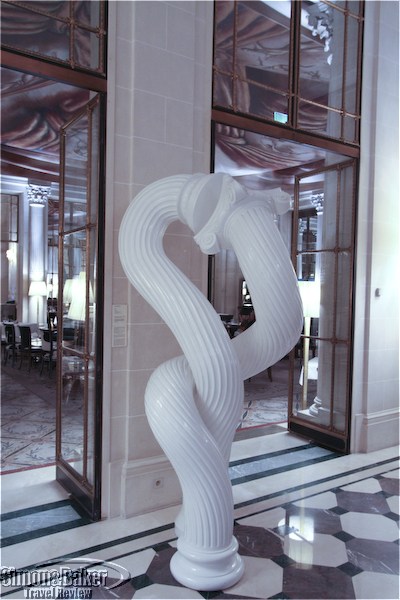 We enjoyed our stay and would gladly return.


Overall Impression Named for Charles-Augustin Meurice the hotel’s history began in 1771 in Calais, where upper-class British travelers on their way to Paris would arrive after crossing the Straits of Dover. There, an enterprising regional postmaster, Meurice (1739-1820), welcomed them to French shores at his Calais coaching inn and arranging rides to Paris aboard his coach service. It was a 36-hour trip, and Meurice built a second coaching inn in Paris in 1817 to welcome the weary travelers on their arrival. The Hotel Le Meurice moved in 1835 to its present site, one of the most fashionable locales in the city, overlooking the historic Tuileries Garden.

Today, the child and pet friendly Hotel Le Meurice remains one of the most fashionable luxury hotels in the city thanks to its excellent location, beautiful interiors with a blend of classic and modern decor, formal ambiance, impeccable service and gourmet restaurants. We enjoyed our stay and would gladly return.

Children Le Meurice had an extensive program for children. It offered tailor-made tours for children guests to the Jardin d’Acclimatation, the André-Citroën Park, and painting workshops at the Art Deco Museum.

The hotel offered children’s candies and sweet treats in the room on arrival. In addition to a special children’s room service, the Happy Meurice Package included a teatime signed by Camille Lesecq in the Le Dalí restaurant. There was babysitting service, strollers and high chairs available on request.

Connectivity A 24-hour high speed connection to the internet cost us 20 euros.

Handicapped Access Five rooms were located next to elevators and designed with extra large doors at the entrance and in the showers to allow wheelchair access. There was braille on the elevator keys.

Location On the famous Rue de Rivoli in the heart of Paris.

Pets Allowed Yes . According to promotional materials, “for more than 100 years, Le Meurice has been happy and proud to welcome guests and their dogs.” Dogs of guests receive a tag and bowl engraved with their name, a selection of small toys to play with, guided walks with a groom in the Tuileries gardens, baskets to sleep in during their stay, and a Salvador Dali inspired egg with an haute couture faux-fur trim.

Year Opened-Renovated The hotel was established in 1835. The most recent renovations of the lobby, bar and restaurants were completed in 2007. Philippe Starck was brought in to assist with the renovations at that time.

Lobby And Common Areas The entrance to the hotel was from the oft overcrowded rue de Rivoli into a large light filled foyer with security staff and objects d’art. Once vetted by the security we passed into the reception and common areas. The rectangular reception was to the left, a cozy sitting area adjacent to it. To the right was Restaurant Le Dali, an open area with high ceilings, inviting sofas and tables. Le Meurice, the gourmet restaurant, was to the right of Le Dali. A dimly lit and rather popular Le Bar 228 was behind the sitting area. The entrance to the bar was on left side of Le Dali. Down the hall from Le Dali toward the back of the building were the hotel’s meeting rooms. To the left from the meeting rooms foyer there was a second foyer with an elevator that led to the lower level fitness area and spa and guest rooms.

Franka Holtmann, the general manager, invited Philippe Starck to redefine the interiors of Le Meurice. Beyond the eighteenth-century decor, his concept was to draw the eyes to “a harmony of beige tones highlighted with red and black, to wood, glass and metal, to touches of velvet, satin and leather. The surprising and the sublime lovingly entwine in this most French of palaces, for the delight of all our senses… for absolute well-being.” The décor was designed to contrast the classic with the contemporary, playing off Salvador Dali themes (he had spent time as a guest in the hotel) and to emphasize stone, gold, earth, and warm tones.

Bathroom Just past the entrance to the room on the left a door led to a en suite marble bathroom with separate shower and bath. The most salient feature of the bathroom was the pretty white marble with gray streaks from floor to ceiling throughout. There were twin sinks to the right of the room below a mirror. To the left there was a built-in bathtub and, next to it, in the corner, there was a shower with a glass wall and a glass door. Across from the shower there was a toilet.
Room To reach our room it was necessary to have our key in the elevator. We stayed in Room 317, a handsome 40 square meter Deluxe Room on the fourth floor of the seven story hotel. Room 317 was one of the first of several rooms leading away from a central elevator lobby. We entered it using a key on the wall which opened the room door. Past the door, a short hallway led into the room which faced other rooms across the building and an inner courtyard below. On the right side of the room hallway, there was a minibar, including a mini refrigerator on the bottom stocked with beverages for sale; and branded products and candy bars on the shelves above.

Past the minibar and on the same side of the hallway, there was a closet with hanging space behind painted wood double doors. A door in the same design led into the room itself. The room was populated with two twin beds with duvet covers and three pillows, set next to each other and against a cloth and wood elegant headboard framed by matching glass topped wood night tables with lamps. One night table had an Alcatel telephone and another had a iPod doc.

Elaborate pale yellow walls, high white ceilings with moldings, a crystal lamp in the center of the room and two wall lamps across from the bed. A dual tone taupe carpet covered the floors. The wall to wall carpet had a subtle pattern in the center which was framed by a solid color in the center. There was a small wood table with a marble top near the room entrance. Next to the bed, and across the room from the desk, there was a tall built-in closet with shelf and hanging space and a flatscreen Samsung television on a shelf in the middle.

Natural light filtered through two large vertical windows that opened onto a central courtyard. The unexceptional view was of the courtyard and facing hotel room windows. See through white shades covered the windows while thick dark curtains protected the room from sunlight and added privacy at night. An additional set of taupe metal curtains framed the windows. Between the two windows there was a pretty wood desk facing the wall with an armless chair, a lamp, a second corded phone and information materials. A luggage rack occupied the left corner of the room. Across from the bed there were two gold and brown upholstered armchairs with a marble top round table between them where a white orchid sat in a simple pot. Two gold and glass framed photos hung above the bed and another larger one hung on the wall opposite the bed.

The temperature was controlled via a central air conditioner with a digital thermostat; its vents high on the wall above the built-in closet.

Food And Restaurants Breakfast was available in-room starting at 6:30 a.m. and in the restaurants beginning at 7 a.m. We had an early morning departure which allowed us 30 minutes for breakfast at the restaurant. There was also room service. Of the two restaurants our favorite was Le Meurice. Restaurant Le Dali served a casual breakfast where Le Meurice offered a more formal a la carte breakfast. At Le Meurice we ordered fresh squeezed orange juice, hot chocolate (it arrived in a pretty silver pot although it was tepid), fresh fruit (pineapple, kiwi, strawberries, mango and raspberries), pastry basket (chocolate and mango pastries), and scrambled eggs with mushroom and bacon.

Le Dali also served “French style” afternoon tea daily from 3.30 p.m. until 6.30 p.m. During our stay we sampled the Terroir Tasting Menu at Le Meurice that focused on the products from the area surrounding Paris. The dining room itself was beautiful with Louis XVI decor, ceiling and wall art, tiled floors dating back to the early 1800s and handsome white marble with black streaks. The service was excellent.

One afternoon we stopped for a drink at Le Bar 228. At first we were turned away because we had no reservations although the bar was mostly empty. As we walked away toward our room the staff person asked us if we were guests. When we confirmed we were he immediately procured a table for us and offered to send our shopping bags and coats to the room. We enjoyed the cozy ambiance and drinks.

Fitness Center And Spa The 300 square meter Spa Valmont for Le Meurice had three treatment rooms for facial and body treatments and a fitness area with ten machines. During the warm seasons it was possible to have a snack or relax at the spa’s terrace with umbrellas, deckchairs, and little tables.

Conference Rooms Le Meurice had five meeting rooms on the ground floor of the hotel, three of which were connecting, including the ceremonial Salon Pompadour. These rooms were capable of accommodating event for five to 450 people for breakfast, lunch, cocktails, and dinner parties.

Other Security was a big part of the hotel features. On entering the building a staff person approached us to inquire what we sought. It was necessary for us to insert our room key in the elevator in order to reach our floor. Although most of the time the room was quiet we sometimes heard sounds from neighboring rooms and there were sounds of construction (hammering and drilling on the morning and late afternoon of our arrival).

Among the famous figures who had stayed at the hotel were Grace Kelly, Salvador Dali, Kirsten Scott Thomas, Albert Einstein and Orsen Wells.

Service There was twice daily maid service, including evening turndown. The maid brought two extra pillows.The staff we interacted with were attentive and efficient. 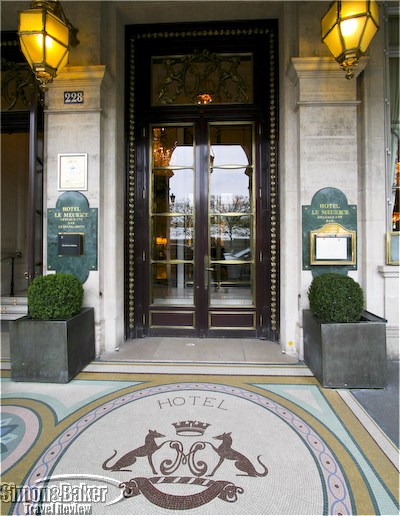 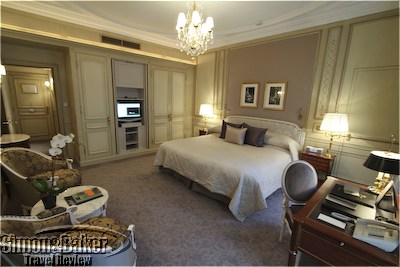 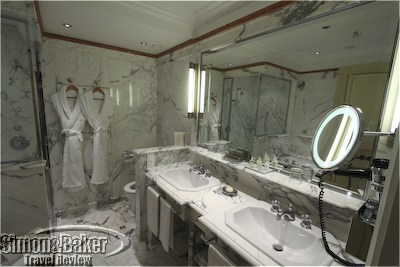 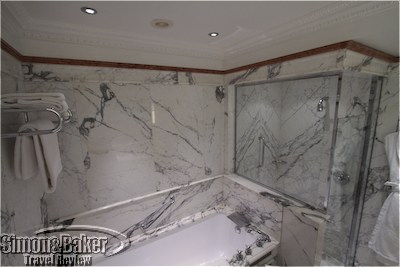 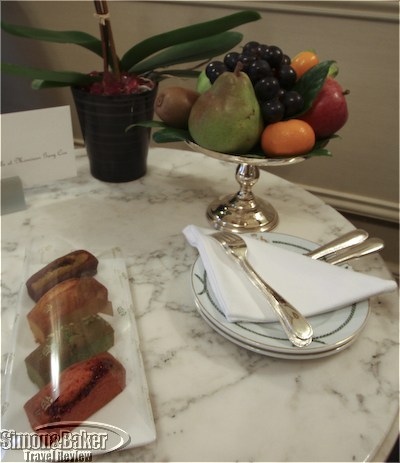 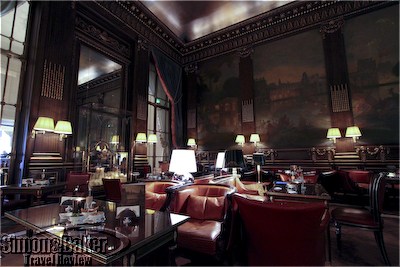 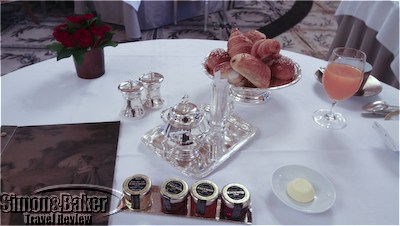 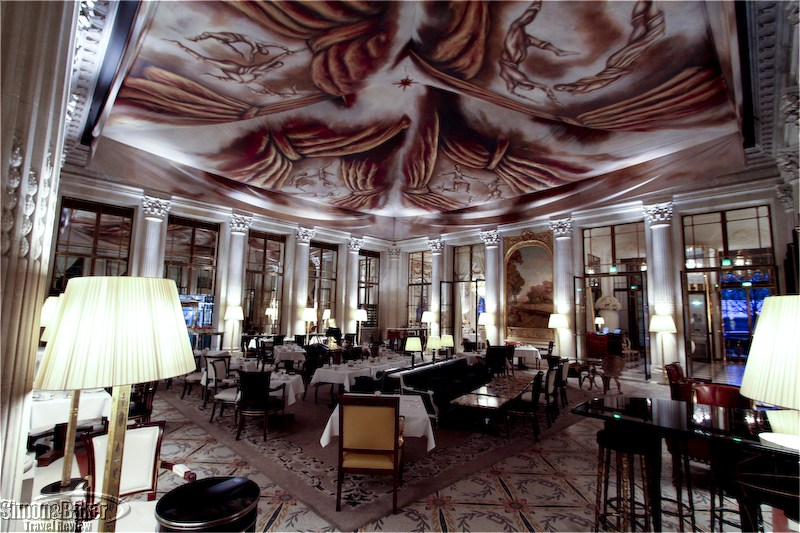