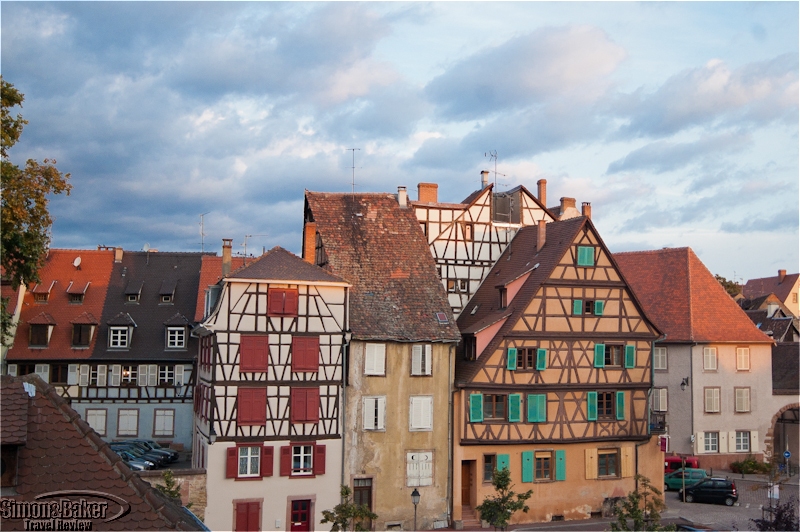 It was a warm and cozy country inn in one of the best locations in town with an outstanding view, comfortable accommodation with a modern bathroom and superb service.


Overall Impression In a city that exudes at every turn the allure of a millennium of rich historical memories, Romantik Hotel Le Maréchal stood out as a gem of timeless romance. Located in the heart of Colmar, in the medieval neighborhood known as La Petite Venise (Little Venice), the property consisted of four adjoining 16th century houses built on the remains of 11th century fortifications overlooking the River Lauch. The rear of the hotel faced the river, while the three-story façade opened onto a small private courtyard. At every window a riot of red geraniums tumbled from windowsill flower boxes. Above it, the impossibly steep red tile roof that is a trademark of Alsace housed two additional stories of chiens-assis (sitting dogs, as dormers are called in French). Inside, common walls had been opened into passageways that jogged and slanted between the various parts of the property to form a welcoming maze of cozy nooks filled with local antiques. Most inviting of all was the restaurant, L’Echevin (a medieval title for a high-level magistrate) at the rear of the first floor. In addition to superb cuisine, this noted bastion of local gastronomy offered a lovely view of the tranquil river and the colorful ancient homes that lined the opposite bank.

With its unique location only a short walk away from all the medieval attractions of Colmar and its own historic charm, Le Maréchal could easily have rested on the appeal of its privileged surroundings. Yet the most memorable aspect of our visit remains the thoughtful personalized service that we enjoyed throughout our stay. When the friend who joined me on this visit to Alsace called to alert me that he had been seriously delayed, I asked the receptionist to change my dinner reservation to a table for one and to expect a late evening arrival. General Manager Alexandre Bomo overheard the conversation and immediately informed me that he was ordering from the kitchen an assiette gourmande to be prepared for the delayed guest. The assiette in question turned out to be a sumptuous cold platter of paté de foie gras (goose liver paté), smoked salmon and an assortment of the best local charcuteries and cheeses. It materialized along with a basket of the appropriate bread for each and a glass of excellent pinot noir, shortly after my friend checked in. At Le Maréchal, it was clearly unthinkable that no matter how late the hour, a guest would not receive the warmest of welcomes, and even more so that he should risk going to sleep hungry.

Romantik Hotel Le Maréchal was Alsace at its most beguiling, perfect for a romantic interlude, a friends’ get-together or special occasion celebration. Or for enthusiastic oenophiles among us, a de rigueur stop in the “capital” of Alsace’s Route des Vins (wine road). It was a warm and cozy country inn in one of the best locations in town with an outstanding view, comfortable accommodation with a modern bathroom and superb service.

Children The hotel welcomed children of all ages.

Connectivity There was complimentary WiFi connectivity in my room. Service was reliable, speed was moderate.

Handicapped Access No. Because of its historic monument status, Le Maréchal is precluded to make the necessary architectural alteration to its 500-year-old buildings to ensure a fully handicapped-friendly environment.

Location In the heart of the historic center of Colmar, a one-mile taxi ride from the train station and a 10-minute walk from the farthest of the many artistic and architectural treasures of the city.

Pets Allowed Yes, there was a nominal charge for post-visit room cleaning.

Size The four story property had 30 guest rooms including two suites and a restaurant that could sit up to 80 guests and included a seasonal terrace. It employed a staff of 35, including 20 restaurant personnel.

Year Opened-Renovated The property opened in 1972 as a casual riverside restaurant that quickly evolved into a country inn. It was purchased in 2000 from the original owner Gilbert Bomo by his brother Roland. It has since been fully renovated and is now the object of meticulous on-going upkeep that respects its official historic monument classification.

Lobby And Common Areas All common areas were located on the lower level of the property and decorated in an eclectic blend of contemporary and rustic Alsatian furniture, artwork and crafts. The floors were deep burgundy wall-to-wall carpeting with tan pin dots, covered with plush oriental rugs. The walls and ceiling were cream plaster with heavy black woodwork and ceiling beams. In the entrance foyer, a long reception desk with a base of matching black crisscross beams against a white plaster background held a polished oak countertop. Behind the desk an antique key rack held rows of traditional heavy brass guestroom keys. It was surrounded by an abundance of framed awards garnered over time by the hotel for the excellence of its hospitality and restaurant. On the opposite side of the foyer, a large nook with a mirrored back wall formed a cozy lounge. A tall, intricately carved armoire occupied the left side wall, while a grandfather clock was centered on the opposite wall. The center of the lounge held two round coffee tables clad in tan cotton with pumpkin colored overlay, each surrounded by four barrel armchairs covered in cinnabar velvet. Brass wall sconces provided the lighting.
Bathroom A small foyer separated the 12 square meter (130 square foot) bathroom and adjoining walk-in closet from the bedroom. The bathroom had a polished cherry hardwood floor and a large dormer window overlooking the river below. Under its rustic beamed ceiling it featured the latest contemporary fixtures, including a long rectangular double sink topped by a wall mirror with a telescopic magnifying mirror on one side and a hair dryer on the other and a deep whirlpool bathtub with hand-held shower. The commode was separated from the remainder of the room by a half-wall. There were hand and face towel on racks on both sides of the sink and oversized bath towels on a tiled ledge by the bathtub. A flat panel television hung from one of the ceiling beams facing the bathtub.

Room My 25 square meter (270 square foot) room, Number 70, was a cozy L-shaped nest tucked under the eaves at the very top of the property. Its two dormer windows draped in heavy tan and burgundy striped satin opened onto an expansive view of the roofs of the old town. Floor treatment was similar to that in the common areas (deep burgundy wall-to-wall carpeting covered with plush oriental rugs). The walls and ceiling were rough white plaster that set off the heavy ceiling beams and the half-timbered exterior walls. The king size bed with its tall, intricately carved oak headboard was recessed in its own nook. On both sides, corner nightstands held reading lamps with candlestick bases topped by silk shades. The bed was covered with a quilted spread in a contemporary pattern of bold burgundy swirls on cream background. The remainder of the room furnishings was Louis XV style, which gave an eclectic feel to the rustic environment. It included two crimson velvet gateleg chairs with open wooden arms. They sat by a round writing table draped in a floor length cloth matching the bedcover with burgundy overlay. A four-drawer bureau served as base for a widescreen television. Wall hangings included two contemporary oil paintings with floral themes and a small Louis XV mirror in a gilded frame with matching shelf.

Food And Restaurants The complimentary breakfast was a generous buffet served in the dining room of L’Echevin. Offerings included eggs, scrambled to creamy perfection or boiled, an assortment of charcuteries and cheeses of the region, smoked salmon, freshly baked croissants and brioches, local Kugelhopf (a light yeasted bundt cake with raisins) and whole grain breads. Cold cereals and yogurt were also available.

At lunch and dinnertime, L’Echevin became a superb restaurant that has repeatedly earned multiple Gault et Millau and Michelin awards.

Facilities There was a restaurant, L’Echevin, and a seasonal riverside terrace.

Service Excellent. Every member of the staff with whom I came in contact during my stay was genuinely friendly and thoughtfully proactive. The room was serviced daily. 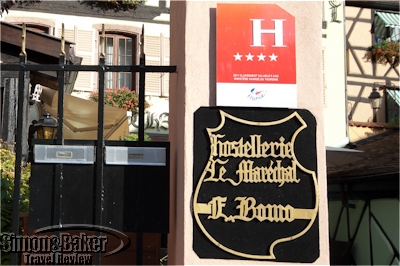 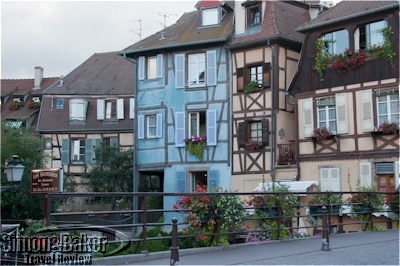 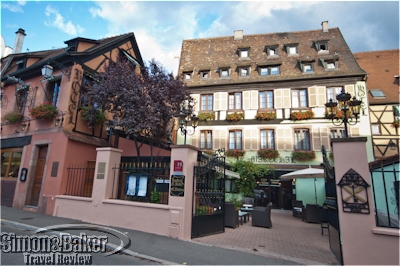 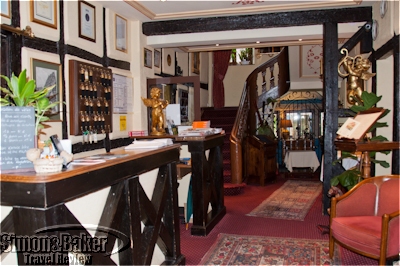 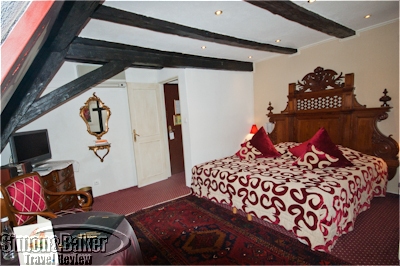 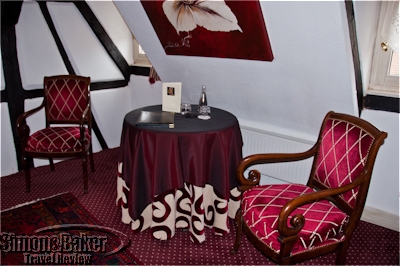 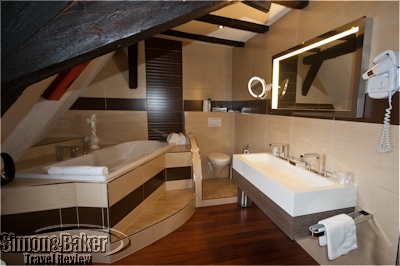 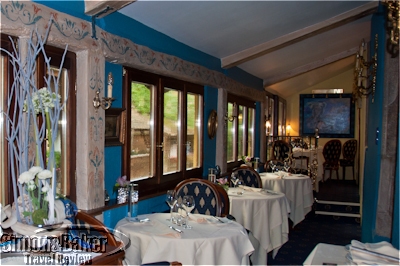 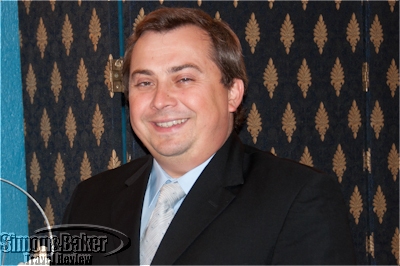