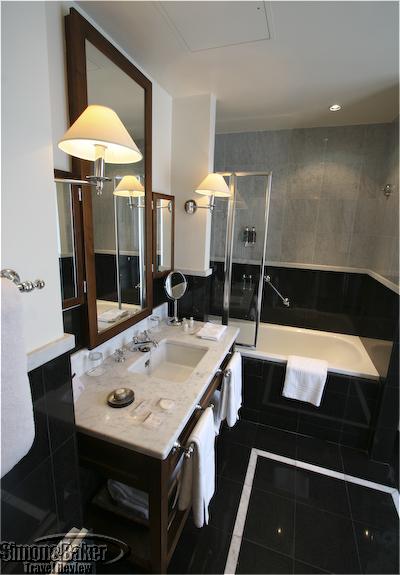 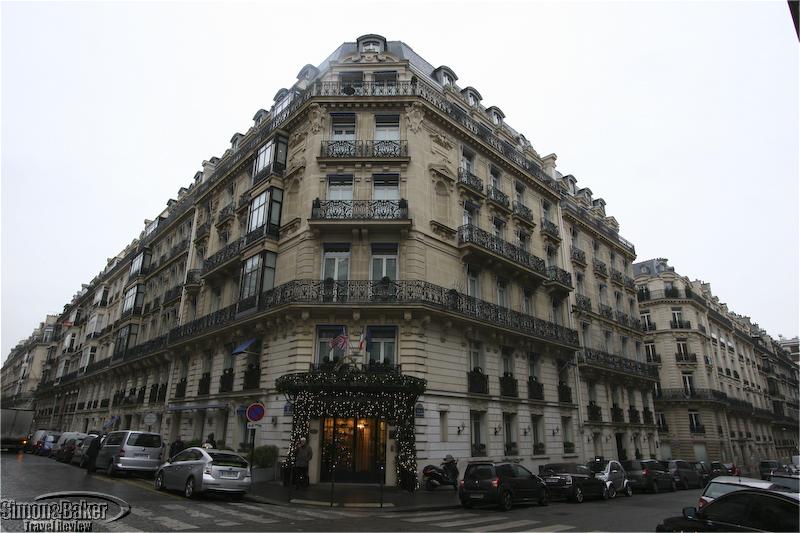 Hotel de la Tremoille will be on our short list of hotels in that area and one we will recommend to colleagues and friends traveling to the City of Lights for business or pleasure.


Overall Impression This small hotel, named to honor Louis II de la Tremoille and the Tremoille Family dating to the time of the crusades, had many pluses and made fans out of us for a second time (we had stayed there several years earlier). In addition to the accommodations and pretty interior, what we liked most was its wonderful location in a quiet street in one of the most exclusive neighborhoods of the city, and within walking distance from the famed Champs Elysees.

There was friendly English speaking staff at the front desk and in the breakfast room. Most of the guests we saw in the child friendly hotel seemed to be traveling on business. We also appreciated that there was a restaurant, a small fitness room and spa treatment rooms in the hotel.

Our upper floor junior suite was tastefully decorated and comfortable. There was complimentary internet access in our room and a DVD player. We also liked that from the balconies of our junior suite we could see the tip of the Eiffel Tower. Hotel de la Tremoille will be on our short list of hotels in that area and one we will recommend to colleagues and friends traveling to the City of Lights for business or pleasure.

Children Yes the property included a complimentary rollaway bed in the parents’ room for children 12 years old and under.

Handicapped Access According to a hotel representative, there was wheelchair access in the hotel and three rooms met handicapped requirements as defined by French law.

Location In the heart of one of the most desirable neighborhoods of Paris, the Eight Arrondissement

Pets Allowed The hotel welcomed small and friendly dogs for a supplement of 50 euros per night.

Size The six-story hotel had 93 rooms and employed 95 staff.

Lobby And Common Areas The imposing Haussmann façade is listed as a historical monument. Indoors the décor was by Cabine Martinent and Richard Martinent. Modern and classic styles were juxtaposed throughout the hotel. The registration desk featured a beautiful glass depiction of Louis II Sire of La Trémoille, the Renaissance knight the hotel is named after. In the lobby, modern square shaped lamps hung from the French ceiling above leather furniture. Glass windows and nature inspired drawings could also be seen along the stairs. The hallway on our floor was lined with photographs of Paris buildings.
Bathroom The bathroom was modern with a touch of luxury. It had black marble floors and a half a wall in the same marble. There was a white marble accent square in the middle of the bathroom and at the top of the black marble on the walls. To the left of the entrance there was a white marble sink area. A wood framed mirror with three partitions was on the wall above it and there was an upright vanity mirror on one side. There were recessed lights and twin wall lamps on either side of the sink. A bathtub with a half glass door occupied the back wall. It had a handheld and standard faucet set up. A glass door shower with a rain shower head and directional shower heads on the walls was in the corner diagonal from the bathtub and next to the balcony doors. The shower and bathtub had gray marble from the middle where the black marble ended to the ceiling. The toilet was across from the shower. We could feel the cold when standing by the toilet and balcony doors. When the shower door did not close completely some some water seeped out.
Room Our 42-square meter (462-square feet) Junior Suite, Room 512, was on the fifth floor. The junior suite was divided into three areas, an entrance level room, a sleeping area and an adjacent bathroom. The entrance living area had wall to wall carpeting with a dual pattern, a red and khaki flower pattern cloth sofa, a red leather armchair, and a black rectangular table in the center of the room. Near the entrance door, there was a glass covered wood desk with a tissue box and a telephone. There was a high speed internet cable at the desk. To the right of the door there was a black square mirror on the wall. There was an entertainment cabinet with a Phillips flat TV, Pioneer DVD player and Logitech iPod docking station with built in speakers. Under the television, there was a mini refrigerator with cold beverages in bottles (water, bottled juices, beer, soft drinks, Champagne and white wine), 50 milliliter bottles of gin whisky and vodka as well as nuts (cashews and pistachios), a bottle of red wine, a can of potato chips and a Toblerone chocolate. There were floor to ceiling double beige curtains for sunlight and privacy, wall and upright lamps and modern framed and glass covered prints. Next to the entrance there was a hatch for room service delivery.

Decorative accents included classic high ceilings, mouldings on the walls, and wood walls painted eggshell to match the other walls. Behind the double curtains in the living and sleeping areas and in the bathroom there was a narrow balcony overseeing the street adjacent to the building accessible in each of the three areas of the room through double wood and glass doors. In spite of the bitter winter cold we peaked out several times to enjoy the partial view of the Eiffel Tower.

From the living area a handful of creaky wood stairs led to a sleeping area. To the right of the staircase there was a comfortable beige cushioned lounge chair. Across from the chair there was a flat screen Phillips television atop a round wood table.To the left there were twin beds (they could be set up as a single larger bed by housekeeping staff) resting against a medium green cloth headboard and framed by identical wood round tables. On the walls there was red and gold patterned wall paper framed by red decorative curtain fragments. Twin wood doors painted beige opened on to a closet with an electronic safe and a fluorescent light with a motion sensor.

There were small lamps on night tables and a telephone on the night table on the right. The room also had dimmer lights. On the walls there were glass framed black and white drawings. Although there was a thermostat on the wall we had trouble maintaining an even temperature in the three areas of the room. The entrance area was the warmest, the sleeping area less so and the bathroom was the coolest of the three rooms, especially the shower and water closet which were adjacent to the balcony door. When the room temperature was too high in the living area, our favorite place to relax, we opened the balcony door slightly. There were individual duvets on the beds as well as a single large feather pillow on each bed. There was a charcoal gray throw blanket on the bed. Although it was mostly quiet in our junior suite we could hear street sounds and traffic noises even with the balcony doors closed; and we could also hear hallway conversations and sounds with the room door closed.

Restaurant Breakfast was served buffet style (and available in room) in the pretty restaurant. There were three kinds of sliced fruit (watermelon, yellow melon and pineapple, all sweet and delicious), fruit salad, cold fish, three types of cold cuts, cheese, cereal, pastries, and small pancakes with maple syrup, scrambled eggs, bacon and sausages in a chafing dish. Minutes after we sat down staff brought hot beverages to our table where there were several jam flavors and honey in sealed glass bottles. The first morning we had an early breakfast and the buffet was fresh and full. Our second day we arrived later in the morning and the buffet had run out of several items. There were newspapers in French and The International Herald Tribune.
Amenities There was a trouser press, a dvd player, satellite TV, video-on demand, a hair dryer (in the desk), and bathrobes for our use during our stay. There were Molton Brown toiletries including soap, shampoo, conditioner, and body lotion in 30 milliliter plastic bottles on the sink. There were four types of Molton Brown body wash in larger bottles hanging on the wall in the bathtub and two other types in the shower. There were also individually wrapped cotton swabs, a shower cap and cotton pads in house brand packages.

Facilities On the ground floor there was a restaurant and bar; in the basement, there were spa treatment rooms and a fitness center.

Fitness Center There was a work out room with mirrored walls, about 200 square feet in size, in the basement. It housed LifeFitness equipment, a treadmill and stairclimber, a recumbent bicycle and small free weights. There was also a sauna and a shower with wall jets, as well as ladies and gentlemen changing rooms.

Spa There were two treatment rooms and a jet-shower room in a designated spa area adjacent to the fitness center.

Conference Facilities There were two meeting rooms, 20 and 45 square meters in size, with capacity for between eight and twenty guests.

Other The hotel was affiliated with Preferred Hotels and Resorts and Hotels and Préference.

Service There was twice daily room service. On our first night, the room service at turn down included a box with four macaron pastries from well known La Duree pastry shop. The staff we spoke with in the room during turn down service, at reception and in the dining room at breakfast were pleasant and helpful. 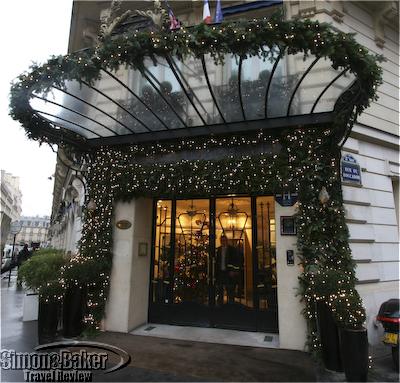 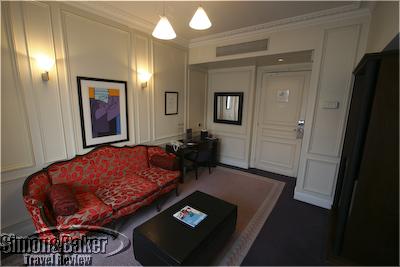 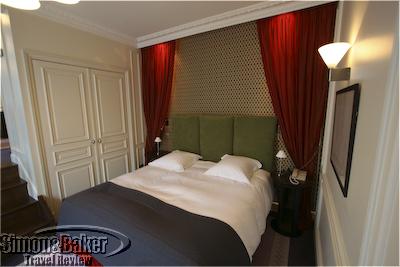 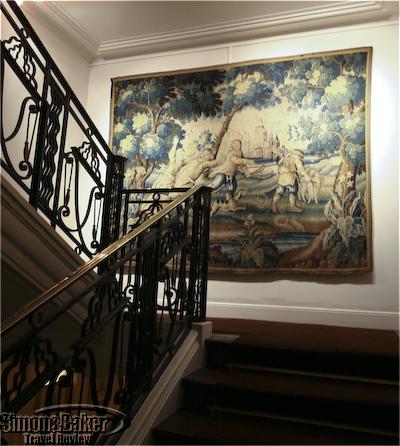 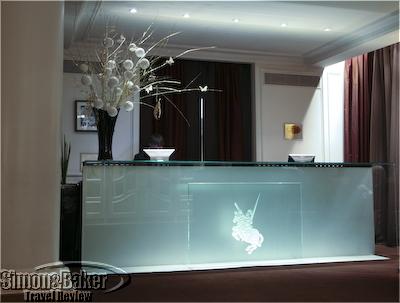 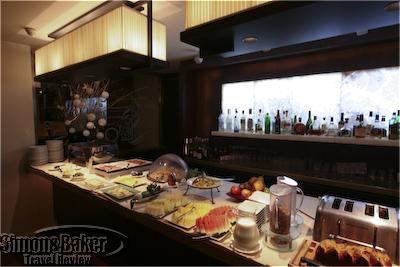 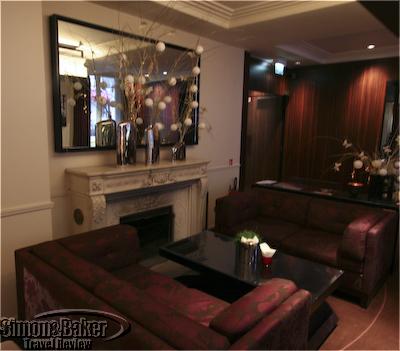