The Greenhouse Restaurant at the Cellars 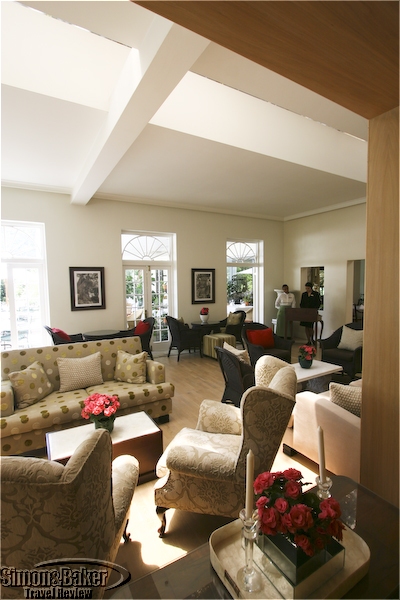 The Greenhouse will be on our short list of restaurants in the Cape Town area for future visits.


Overall Impression A sunny summer afternoon found us enjoying a marvelous lunch at the aptly named The Greenhouse Restaurant at The Cellars-Hohenort Hotel and Spa just outside of Cape Town. From our indoor table in a cozy corner, we could see through the glass walls to the lovingly maintained lush gardens and Table Mountain, and observe fellow guests enjoying their meals on the restaurant terrace.

We instantly fell in love with the magnificent setting and soon forgot our cares while we gave in to the temptations of Chef Rumé Booyens’ menu. A local oenophile had recommended, when he heard of our plans to visit The Greenhouse, that we look up Miguel Chan, the property’s wine steward. That turned out to be a stroke of genius. With his guidance and the chef’s delicious dishes we had a noteworthy lunch.

The Greenhouse offered an ideal lunch setting, beautifully presented outstanding dishes, and gifted and adventurous wine pairings courtesy of the team of seven wine stewards on staff. The short drive from Cape Town to the Cellars-Hohenort was well worth it. The Greenhouse will be on our short list of restaurants in the Cape Town area for future visits.

About The Executive Chef After training at the Christina Martin School of Food and Wine in Durban, Chef Booyens joined Stephanie’s in Sandton, Johannesburg. She later joined The Marine Hotel in Seafood at The Marine as chef de partie. In time she was promoted to sous chef and later on she became head chef.

She broadened her experience by traveling to Germany where she worked under the tutelage of Chef Johan Laffer. On her return to South Africa she took over the reigns of The Pavilion at The Marine where she and her team emphasized modern South African cuisine with a contemporary twist. Upon her return from working with Chef Raymond Blanc at Le Manoir aux Quat’ Saisons, Chef Booyens was appointed head chef of The Greenhouse Restaurant at The Cellars-Hohenort Hotel in August 2007. Her philosophy on food is that of reflecting flair, control and discipline with a touch of frenzied passion.

About The Head Sommelier Miguel Chan, sommelier at The Cellars-Hohenort since 2003, was among eight finalists, and represented South Africa, at the Inaugural Concours Internationale des Jeunes Sommeliers, in Frankfurt, Germany. He is responsible for the wine cellar at the Cellars-Hohenort Hotel.

Miguel is also the brains behind one of the longest martini lists in the world at The Martini Bar adjacent to The Greenhouse at The Cellars-Hohenort. He recently completed the Introductory and Certified Sommelier course with the Courts of Master Sommeliers in Torquay, Devon in the United Kingdom, described by some as the only official body worldwide to recognize professional sommeliers.

Miguel is the first resident of Africa, and the first in South Africa to be admitted at the Courts of Master Sommeliers, and to receive a Certified Sommelier title. Next, he plans to proceed to the Advanced Level in May 2010.

Location At the Cellars-Hohenort Hotel and Spa in the outskirts of Cape Town.

Opened-Renovated The restaurant opened in 2003. The Martini, the adjacent bar, was renovated in 2006.

Size The restaurant occupied 215 square meters of space (The Greenhouse took up 160 square meters and the Conservatory 55 square meters) and could accommodate 80 guests who were looked after by a staff of 20.

Executive Chef Of The Collection Brought up by a South African father and Canadian mother, Peter Tempelhoff spent most of his life traveling and working in different countries. He studied economics in college before discovering that his true passion was cooking. Initially, making Cape Town his base he trained at the Institute of Culinary Arts in Stellenbosch in 1996 with Letitia Prinsloo.

His first chef job, at Grande Roche Hotel in Paarl, was important because there he met his future wife Angela and learned discipline as well as the importance of being resourceful and creative by working with Frank Zlomke, the executive chef. Next, he relocated to London to and landed a job at Quo Vadis with Marco Pierre White.

After two years at Quo Vadis, he worked in his first Michelin restaurant with his long time mentor and friend Aaron Patterson of Hambleton Hall. From there, he worked in an historical restaurant in Cambridge with Chef Spencer Patrick. Eventually, he returned to London to work as assistant head chef at La Rascasse Restaurant. He also worked at Zafferano Restaurant owned by Giorgio Locatelli and later became executive chef at Automat in Mayfair, London.

In October 2006, after the birth of his first child Jason, he and his wife Angela returned to Cape Town where he worked at Grande Provence Estate in Franschhoek. Working alongside a dedicated kitchen, he achieved the sought after title of Sunday Times Chef of the Year 2007, Franschhoek Life Chef of 2007 and also elevated The Restaurant to Eat Out Top 10 Restaurants in South Africa. In January 2008, he became executive chef for The Collection by Liz McGrath.

DÉCor-Ambiance The décor was subtle emphasizing earth tones. Tranquillity and simplicity were the themes the designers were after in order to bring the pretty gardens of The Cellars into the restaurant, physically, mentally, emotionally and gastronomically.

The large plate-glass windows highlight the 300-year-old camphor trees alongside some rare species of ferns and indigenous plants, and a handsome 100 year old oak tree was enclosed in an atrium within The Greenhouse itself.

Cellars Wine And Alcoholic Beverage Selection The Green House had an impressive 50-page wine menu and maintained a minimum of 500 wine types in its cellars, including one of the most comprehensive international wine collections in the country. It also boasted one of the world’s largest martini lists. The estate included four acres of vineyards from which a small house wine selection was produced at a nearby winery.

The Cellars-Hohenort Hotel, where the restaurant is located, boasts one of South Africa’s finest selection of Cape wines as well as 9,000 bottles totaling 520 bins with vintages from 1975 to 2007. The Cellars is also home to the complete collections of the wines of Constantia Valley, the birthplace of the South African wine industry 366 years ago. The Cellars-Hohenort has the complete mythical collection of the famed Vin de Constance, from 1986 made by Klein Constantia Estate. The hotel received the Diners Club International Wine List Award of Excellence for seven consecutive years.

Meal Every course we sampled at The Greenhouse was delicious and perfectly prepared. Our four course lunch menu and wine pairing began with a glass of South African bubbly. The first course was melt-in-your-mouth Ceviche of Scallops, Tuna and Abalone with daikon radish pick, lime, soya caviar served with a Buitenverwachting Rhine Riesling. Next, we had a delicious Quail and Boudin Blanc with truffled turnip puree, organic carrots and Mousseline gratin served with Eagles Nest Viognier. The third course was tender and savory Braised Pork belly and Foie gras with a ragout of crayfish and orange scented reduction served with a “gasoliny” Robertson Pinot Noir that matched well as did the other wine marriages. For dessert we had a medley of flavors in The Greenhouse Dessert Tasting Plate with ice cream served with the estate Vin de Hohenort 2006 Natural Sweet Wine Private Reserve, a private selection for loyal guests (not for sale) produced at the nearby Waterford Estate from wines grown at the Cellars-Hohenort property.

On our previous visit, we began our meal with Lemon Dressed Prawns and avocado salad with gruyere and white truffle cream, a starter of Citrus Infused Prawns on a bed of cubed avocado and toped with watercress and accompanied by a delicious truffle dressing. Next, the chef sent us a sweet spearmint and berry sorbet. Following the sorbet, we enjoyed Slow Roasted Crispy Duck Ginger and honey jus, the house specialty of crispy duck cooked over a 24 hour period. It was served with a stuffed potato (a little overcooked) and steamed carrots. We also sampled a savory and creamy chicken and prawn curry.

For dessert we had an apple crumb dessert paired with cinnamon ice cream and another house specialty, Lavender Crème Brûlée served with a lavender biscuit.

Miguel Chan, the restaurant’s wine steward, paired wines to match our lunch menus. We were delighted with his selections and enjoyed our meal especially as a result. For the second menu we had: With the starter we had very dry Non Vintage Buitenverwachting Constantia Méthode Cap Classique Brut (a Pinot Noir and Chardonnay blend) which was similar to a champagne; and light 2006 Deetlefs Estate Breedekloof Weisser Riesling which complimented the savory prawn well. We alternated between the starter and the two glasses of wine. With the main course we also enjoyed two types of wine. We would have a bite of the duck and sip one wine, after another bite we have a sip of the other wine and so on. This was a playful and fun way to sample and compare the red and white wine selections he chose on our behalf: a 2006 Buitenverwachting Constantia Sauvignon Blanc and 2005 Cape Point Vineyards Scarborough Red (Cabernet Sauvignon and Shiraz blend). With dessert we had a fruity 2002 Rudera Noble Late Harvest Stellenbosch Chenin Blanc.

Other Some of the produce for the restaurant came from the property’s four herb gardens which included plantings of micro herbs.
Date Of Review November 2008

Service Staff were polite and eager to please. 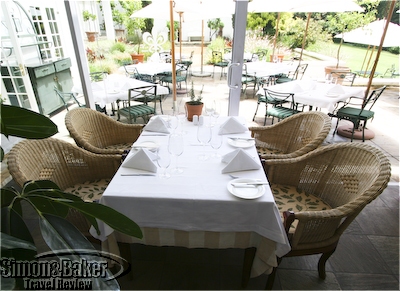 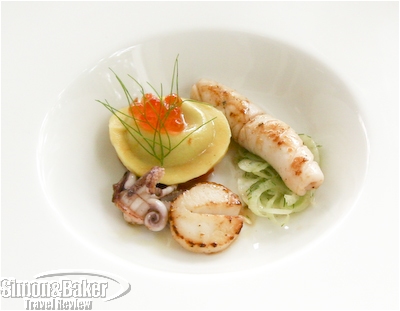 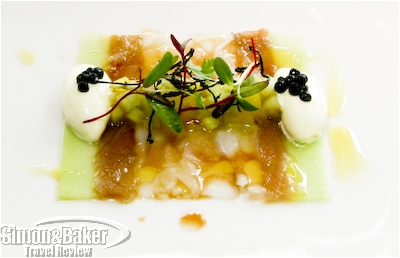 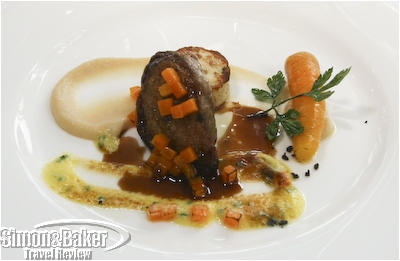 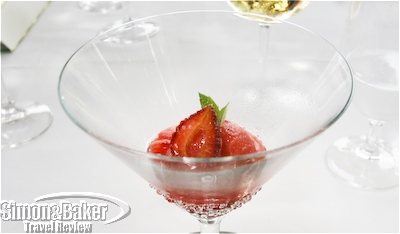 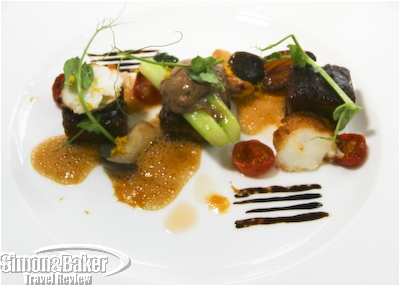 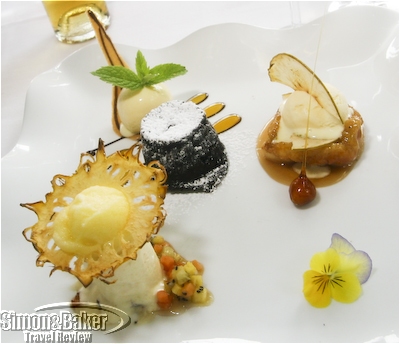 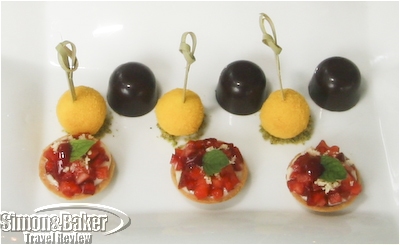 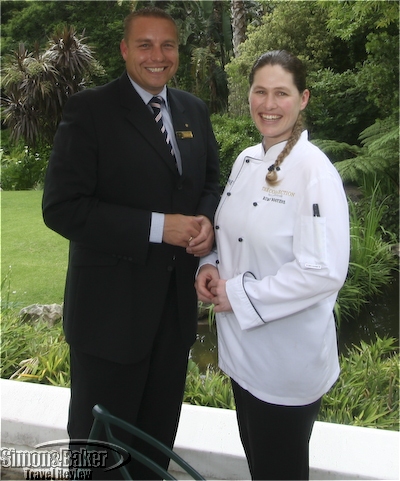