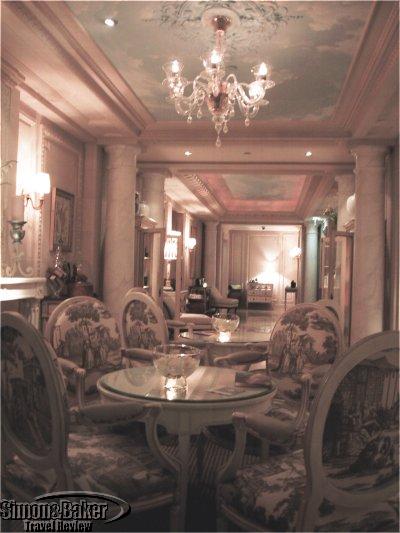 We have recommended the Spa at the Four Seasons to several friends and plan to return at the first opportunity we have.


Overall Impression : We arrived after a plentiful lunch; rushed and tired from running errands and buying souvenirs. Inside the George V spa we entered a world of pampered luxury, escaping for a few hours from our cares. Small touches abounded to enchant the guest. The new looking facilities were immaculate. Subdued lighting, quiet ambiance, elegant and understated décor, comfortable furniture, delicious and refreshing complimentary beverages and plump and juicy dried fruit, guest centered staff, and a plethora of treatment options provided an irresistible combination.

Every treatment we experienced was superb. The facilities were designed with guest comfort in mind. For example, the walls in the hallway leading to the treatment rooms and locker area were cushioned and covered with handsome cloth. The muted sounds added a soothing quality to the common area. Next time, we will schedule extra time in between treatments to relax in the spa lobby for a few moments or remain after the treatments to enjoy the sauna. After three treatments and as many hours, we felt energized, refreshed and rejuvenated. We have recommended the Spa at the Four Seasons to several friends and plan to return at the first opportunity we have.

Treatment Rooms There were 11 treatment rooms including one for couples

Common Areas Elegant , comfortable and understated Louis XVI décor with marble, cushioned cloth wall paper, mirror and glass features throughout.
Food Though it was described as “not really a restaurant but a place to have a rest and eat light dishes in a quiet and friendly atmosphere,” the small area adjacent to the spa entrance was a lovely place to relax, enjoy complimentary fresh or dried fruit or one of several beverages. It was possible to order from an abbreviated menu.
Amenities There were Four Seasons bath robes, slippers, toiletries as shower gel, the juice bar with the Spa Paradise Cocktail, ginger tea with honey, coffee, tea, spring and sparkling water and fresh and dried fruit.

Facilities There was a reception area with lounge chairs and dining options and 11 treatment rooms, sauna, hot tub and men and women’s locker rooms. There were also two rooms for hairstyling, makeup, manicure and pedicure and a relaxation room, where people can rest and listen to music in a Zen atmosphere. Though the spa included a pool and fitness center they were only available to hotel guests.

Lockers And Bathrooms The ladies locker room featured lockers in various sizes, bathrobes on hangers for spa guests to serve themselves and terry slippers.

Treatments Experienced After a cordial welcome at the spa reception we were escorted to the locker rooms. We quickly slipped into a terry bathrobe and returned to the reception area where there were several tables and chairs and a self service wet bar with tasty spa juice , herb infused water, bottled beverages and dried fruits. After a few minutes a uniformed staff member arrived. A short walk down the hall led to a spotless treatment room with muted lights and soft music. There was also a large en suite shower which we took advantage of following the first treatment, a body scrub with argan oil (from the argan tree found mainly in Morocco). The treatment itself was excellent. It was our favorite treatment at the spa and the best body scrub we’ve had. Sylvie, who performed the scrub, had firm and supple hands. At the end we felt refreshed and clean. We remained in the same treatment room, though she swapped out the table linen, where she followed the scrub with a relaxing George V massage using the same argan oil. After a brief break, Emma collected us in the ladies locker room and led the way to another treatment room for a George V facial. 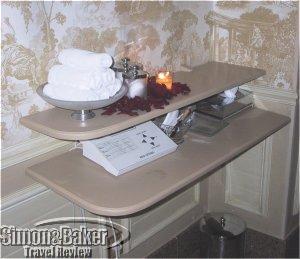 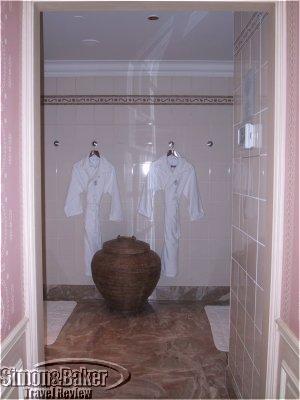 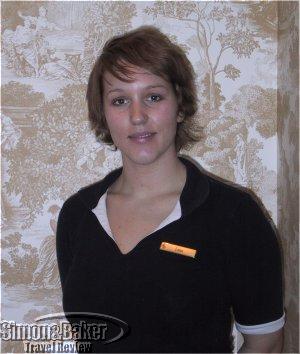 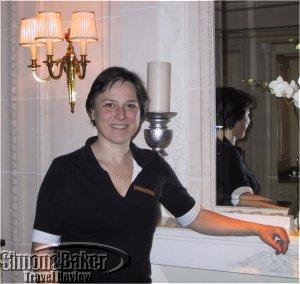