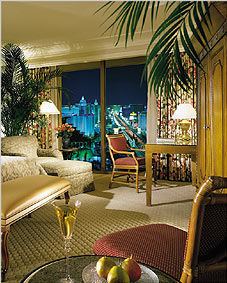 There are a lot of hotels in Las Vegas, many of them with rooms and suites just as nice as the Four Seasons. But for the overall experience, from check-in to breakfast to evening turndown, this was the hotel for us. No slot machines and casino to walk through to access the elevators, quick check-in without velvet roped lines of dozens of travellers. If you have to travel to Las Vegas, are willing to spend the money and prefer less chaotic accommodations than the other hotels offer, consider the Four Seasons Las Vegas. During our stay, it was head and shoulders above the rest.


Overall Impression There are a lot of hotels in Las Vegas, many of them with rooms and suites just as nice as the Four Seasons. But for the overall experience, from check-in to breakfast to evening turndown, this was the hotel for us. No slot machines and casino to walk through to access the elevators, quick check-in without velvet roped lines of dozens of travellers. If you have to travel to Las Vegas, are willing to spend the money and prefer less chaotic accommodations than the other hotels offer, consider the Four Seasons Las Vegas. During our stay, it was head and shoulders above the rest.
Class Of Accommodation Five Stars

Restaurants We enjoyed breakfast and lunch at the Verandah, which offers a choice of indoor or outdoor dining and delicious food. We enjoyed the business special swordfish and accompanying salmon pancake appetizer, the Cobb salad, and turkey wrap for lunch. During breakfast, the pastrami and corned beef hash and the mini Belgian waffles were among our favorites. Service at the Verandah was spotty. At times, speedy and efficient; other times, slow and slightly disjointed. Staff was courteous and endeavored to accommodate special requests.

Rooms Strip view room was comfortable at 500-550 square feet. It included a king bed with canopy, a desk and two chairs, a lounge chair and matching foot rest and a dresser/TV stand. We found a wet bar, minibar (well stocked and expensive) and safe near the entrance along with an ironing board. The view of the strip and mountains in the background was charming, especially at night. Worth the extra $100 per night if you enjoy having a view from your room.

Facilities Two restaurants including a kosher kitchen, and a lounge. Hotel facilities are independent from those of its neighbor the Mandalay Bay Hotel. Guests have access to a private swimming pool, kiddy pool, jacuzzi and complimentary cabanas when available (see pool description). The lobby also features a jewelry store with some of the loveliest jewelry we saw on the Strip though maybe I did not look like I could afford any of their wares. Few times have I been greeted with such disinterest inside a jewelry store and been offered so little information. There is a sundry shop and the Spa also sells beauty products and bathrobes.

Spa The work out area was clean, well equipped, including free weights, treadmills, bicycles, Lifecycles and Precor machines. It was stocked with plenty of towels, complimentary chilled water and Gatorade, newspapers and fruit. Headsets and remote controls for the individual TV sets were available (no glaring TV’s or obnoxious music there). Staff brought us chilled water unbidden. I spoiled myself with some massages. I had explored several local spa options before we arrived thinking I would sample some of the other facilities. After seeing how crowded the other hotel areas were and what a production it would be to get to the more desirable spas at the opposite end of the strip, I decided to stick with the hotel spa. The spa was pleasant and serene though on the weekend the pace became much more frenetic. One of the staff even apologized for the tension level. I decided to reschedule my appointment to a quieter time. During the week the Spa was pleasant and soothing. On the weekend though it still felt a bit like an assembly line.

Poolside service was irregular. At times, the amenities were brought frequently while other times and days it was a challenge just to get a pitcher of iced water, in spite of strategic tips upon arrival. The biggest poolside challenge was the availability of shade, especially in the 100 degree summer days. The majority of the lounge chairs circle the pool and there are no umbrellas near them. With the exception of the cabanas, and there is a limited number of those, there is little shade. If you are able to secure a cabana following the first come first served policy, you have to watch it carefully. Staff threatens to evict you if you are away for more than 30 minutes and all the cabanas are taken. If you plan to spend your day poolside, you either have breakfast and lunch at your cabana, which accommodate two comfortably, or risk losing it. On the plus side there is wireless Internet access poolside and if you are lucky enough to have a cabana, phone service and an electrical outlet so you can lounge and be connected simultaneously.

Watersports the Mandalay Bay offers a wave pool and a pool with a circular current that allows floating, but no other real watersports available. The pool at the Mandalay was very crowded and without adequate shade, so we avoided other than a quick walkthrough and rapid return to the serenity of the Four Seasons.
Other In theory, a pet friendly hotel is good, especially if you like to travel with your own dog. However, dogs who are not socialized properly or owners who are impolite or inconsiderate can put a damper on your enjoyment. Our neighbors in the next-door room brought two yappy dogs with them. They barked constantly, apparently because their owners left them alone against hotel rules. Hotel staff was not much help. They said they were going to move the dogs temporarily out of the room and suggested we consider moving to another room! After four calls and two days of dog yapping, we were enticed to change rooms around 10:30 pm with an upgrade to a suite. Though we appreciated the upgrade, the request to hurry up was unwelcome, especially since we had to wait half an hour for the room key and bellman to arrive. The large suite had a stunning view including the north and south parts of the Strip. Only damper was the loud concert at the Mandalay Bay that kept me awake until 1 a.m.
Check-In-Check-Out Process Ease : Easy and pleasant. We were especially pleased with the check-in when we compared it to every other hotel we visited from the less expensive to top properties. They all had long lines. Some hotels even offer airport check-in service and that was crowded too. When we arrived at the Four Seasons, we went straight to the check-in without a single moment’s wait. In addition, our room was available way before the official check-in time, which meant we were in our bathing suits and poolside way ahead of schedule. We purposely selected a weekday to minimize the potential for large crowds. What a pleasure!

Cleanliness Excellent. The cleaning staff did a great job of maintaining the room, keeping it tidy and being unobtrusive. While cleaning the room, they would work within the room and not leave a cart parked in the hall with the room unlocked, and whenever we encountered them, they were always courteous.

I cannot but wonder what effect the many small dogs we saw around will eventually have on the overall cleanliness of the hotel and rooms.

Overall Service At times, the service was excellent (like a concierge getting hard to find reservations), other times it was downright poor (like the bell service at the door who was too busy to help with luggage when our cab arrived, left by himself to handle all arrivals). Weekend service in the Spa was much lower than during the week.