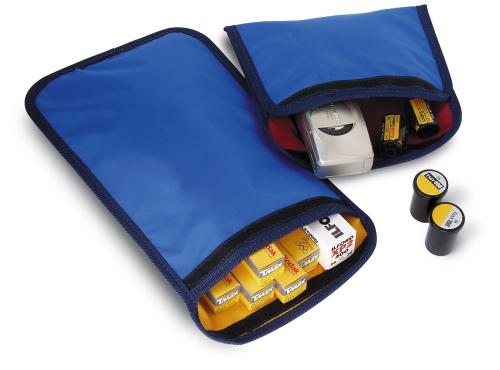 Carry your film in your carry-on baggage whenever possible; check-in luggage may receive a much higher dose of radiation from the high-tech scanners used in many airports. Also, for security reasons, you will likely be asked to empty the contents for inspection.


Overall Impression The Magellan’s Security Bag (Large) is a travel bag used to protect film from airport x-ray security devices. The Security Bag is made of a flexible lead fabric and weighs 16 oz empty. We used the Security Bag for a total of 4 weeks and tested 2 rolls of film with it. One roll was 200 speed film and the other 400 speed film. Carry-on luggage is scanned by security scanners at a lower power level than check-in baggage security scanners. The TSA (Transportation Security Administration) does not recommend putting film into check-in baggage so we chose to place our film in our carry-on luggage inside the Magellan Security Bag. As of this review date (Sept-14-2004) the TSA states the following about placing film through security screening equipment, “Carry-on screening equipment might also damage certain film if the film passes through more than 5 times.” Due to the length of our trip our film was scanned 6 times by airport security before being developed. So we exceeded the recommended maximum number of security scans by 1. The film produced pictures that were excellent. The development lab noted some fogging on the edges of the 200 speed film, but the lab felt it was a commonly seen manufacturing defect because the 400 speed film which is the more fragile of the two films was in perfect condition. The development lab having seen damaged film from airport security equipment in the past was impressed with the results, and we were happy with our pictures.

Magellan notes the following about carrying the Security Bag in your carry-on luggage: “Carry your film in your carry-on baggage whenever possible; check-in luggage may receive a much higher dose of radiation from the high-tech scanners used in many airports. Also, for security reasons, you will likely be asked to empty the contents for inspection.”

Made In Skokie, Illinois

Would You Use This Product Again? Yes