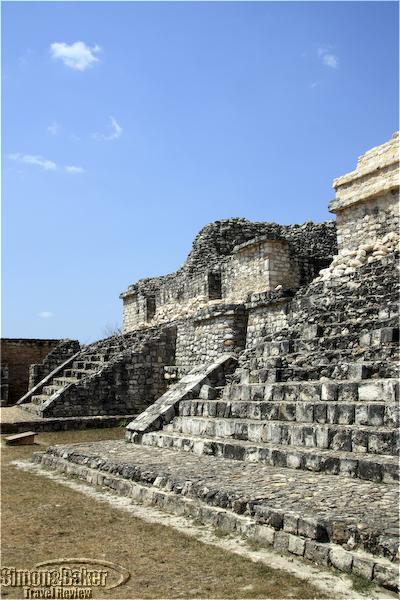 Although we were not very far from civilization, in these two archeological sites we felt far removed from the modern world.


Overall Impression On our last trip to Mexico, we decided to expand our travels and enjoy not only the beach, comfortable hotel and fabulous food but also some of the lesser known architectural sites located in the Yucatan Peninsula. Mayan culture is all pervasive in this region. In the local villages, many villagers still dress in traditional clothing: embroidered blouses and colorful woven skirts. Dating back as far as 3,000 years, the flat countryside has been dotted with Mayan ruins that are not necessarily visible to the naked eye. Most are covered by jungle vegetation and it was only recently that excavations began to uncover some of these architectural wonders. Coba and Ek Balam are two of the locations that are still relatively unknown. When we travel, we always enjoy experiencing unusual, or less well frequented, places and so we were pleasantly surprised that there were so few people when we visited these two sites.

Although these two archeological sites can be reached by car, we chose to take organized tours. Coba and Ek Balam are both remotely located several hours from the coast; Coba to the south towards Tulum, and Ek Balam to the north west towards Chichen Itza. These were two separate day trips. We had visited Cancun over 20 years ago and were not aware, at the time, of these two archeological sites. It was only recently that they were opened to the public.

They are both still in ruins, and little to no reconstruction has taken place. We particularly enjoyed the rugged nature that surrounded these two sites. We felt that we were going back in time. It was well worth the climb up to the top of the pyramids of both locations. Uneven steps made out of irregular stones were a little hard on the knees and definitely not for the skittish traveler but the view from the top was well worth the climb. There was jungle as far as the eye could see. The large expanse of seemingly uninhabited nature was impressive. And just knowing that underneath the raised areas of jungle were many lesser pyramids, yet to be uncovered, added mystery to the sights.

The wild jungle vegetation is in the process of being cleared but there is still much to do there. Multilingual guides were available at the entrance gate for a fee but it was not necessary for us to hire one as most good travel books make reference to these two sites. We were free to walk around anywhere on the site and explore to our hearts content. As these two sites are quite remote, no restaurant or toilet facilities were located on site. It gets very hot during the day and so we were pleased to be there early in the morning with our bottles of water.

Chichen Itza is perhaps the better known of the Mayan sites however tourists are no longuer allowed to climb the pyramids there. In Coba and Ek Balam tourists may climb to the top of the pyramids and the sites are equally as ancient as in Chichen Itza. We enjoyed visiting Coba and Ek Balam because they are less frequented by tourists and yet they are steeped in ancient Mayan culture. Although we were not very far from civilization, in these two archeological sites we felt far removed from the modern world.

Health And Vaccinations There were no advisories but bug spray was essential in the jungle and we only drank bottled water.

How To Get There The nearest airport is Cancun International Airport. Rental cars were available but we chose to take a tour bus departing from our resort in order to admire the scenery and local color. The tours were easy to arrange from our hotel.

Location In the Yucatan Peninsula, inland about two to three hours form the hotel zone of Cancun and Playa del Carmen.

Coba Located about two hours south of Cancun, the ruins of Coba date back to 600 A.D. The area was abandoned by the Mayan people for unknown reasons. At its height, Coba housed over 45,000 inhabitants and was a major stop between Tulum, on the coast, and the cities inland. The site was undiscovered by the Spanish. Excavation was started in the 1970’s and there are still many ruins that are covered in vegetation. An early start was essential for us as there was a 20 minute walk through thick jungle to get to the archeological site. Bicycles were available at the entrance, for a fee. We made sure to have water as there were no restaurants on the site. This area of 50 square kilometers or 80 square miles was in almost pristine condition. Coba is believed to contain up to 6,500 structures of which only a small fraction have been restored.

The tour we chose included two stops. After an early morning visit of the site, we went to a nearby village where we were treated to a typical Mayan feast. After this late lunch, and on our way back to Cancun, we stopped off at a cenote for a cool swim. Cenote comes from the Mayan word dzonot meaning well. A cenote is a deep water filled sink hole created in limestone formations when part of the roof of an underground cavern collapses. The cenote is fed by clear underground streams and rainwater. The water was cool and refreshing. Tucked off the road, at the end of a narrow path in the jungle, we enjoyed the healing waters of the cenote . This was the end to a perfect day of exploration.

Ek Balam Located about two hours north and inland of Cancun, this sight was a real gem. Ek Balam means the black jaguar, a powerful image in Mayan culture. Only a few buildings had been excavated when we were there, but we could already see the complexity of the architectural plan. On our arrival at the sight, we saw a system of roads that date back to 100 A.D. As we entered through an archway, we crossed the ball court and could follow any number of roads to various buildings. The central pyramid/tower is unique in the Yucatan and also one of the largest pyramids in the area. We climbed to the top and we marveled at the unbroken view of jungle scenery. Just knowing that there were many more ruins and ancient villages hidden underneath the lush greenery, waiting to be discovered, was awe inspiring.

As a side trip we went to the colonial town of Valladolid which was founded in 1543 by Francisco de Montejo. As in so many other places, the Spanish built their towns on the sites of old pagan temples. Valladolid used to be a Mayan town by the name of Zaci. The central plaza is surrounded by small hotels and restaurants built in the typical Spanish style of the 16 th century. The walls go right to the edge of the sidewalk but each building has a central courtyard lush with greenery and a small water feature. We enjoyed a cool drink on one of these terraces. Along one side of the square, Mayan women, dressed in immaculate white embroidered dresses, sold their handicrafts. We found this area to be a good place to buy our souvenirs and gifts.

Would We Go Again Yes 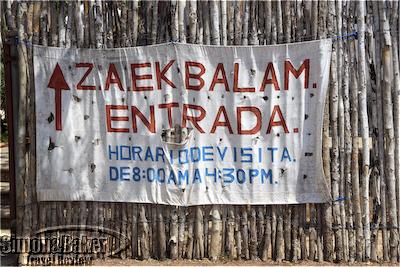 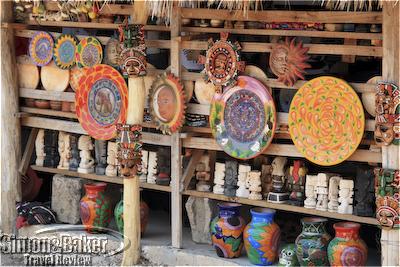 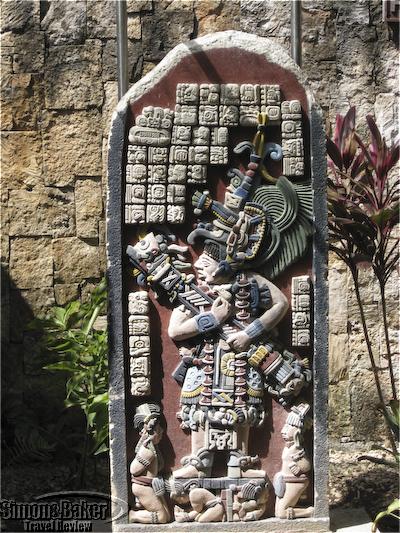 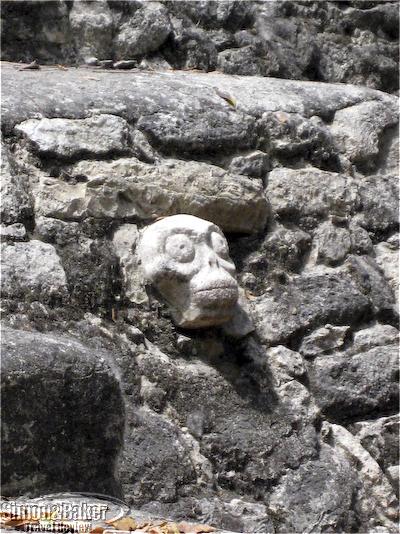 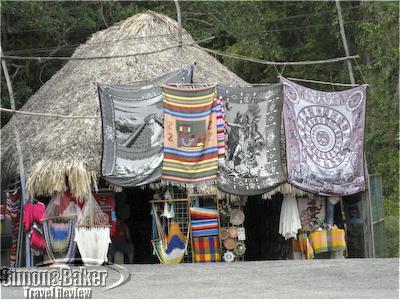 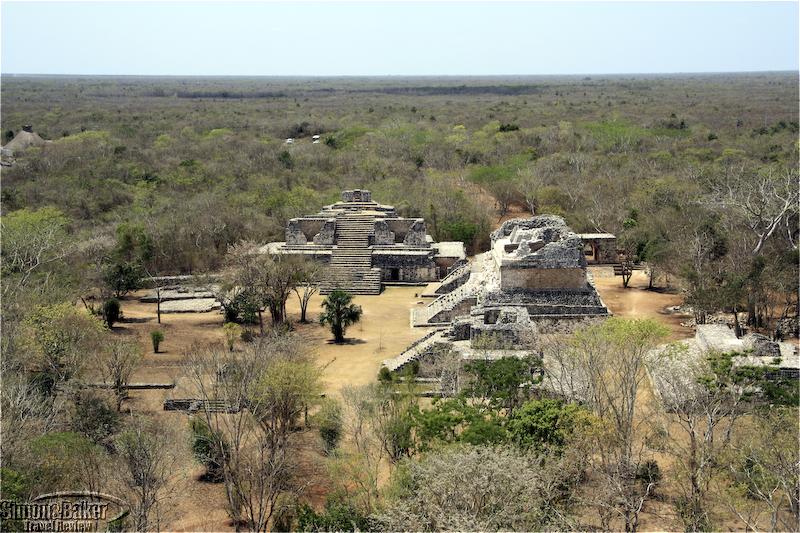