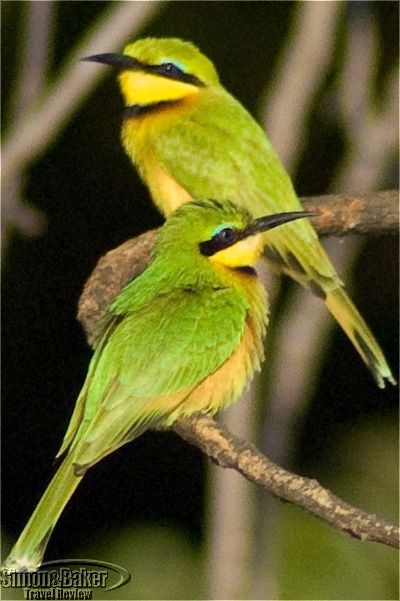 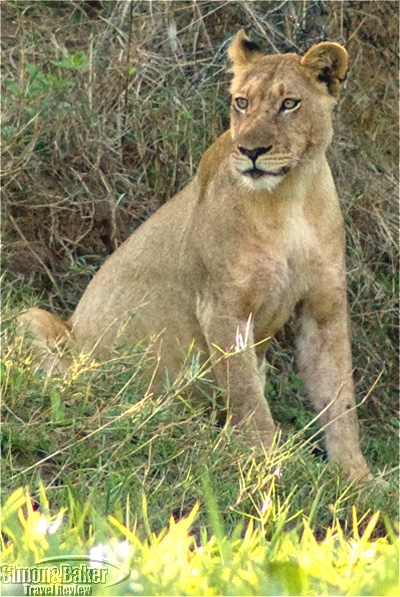 Game viewing doesn’t get any better that this!


Overall Impression Chiawa was my idea of what Eden should be: outstanding creature comforts, superb organization, spectacular views and constant game activity! Nestled under a lush canopy of riverine forest in the heart of the Lower Zambezi National Park, the Chiawa Camp blended so unobtrusively into its surroundings that elephants and buffalos routinely paraded within feet of my tent on their way to the river. Guest accommodations consisted of eight tents on raised wooden decks under thatched roofs. The tents were spread out across the property, set sufficiently apart to give a feeling of peaceful seclusion. All were positioned to enjoy a sweeping view of the massive Zambezi flowing a mere 100 yards away.

The common areas were designed to take full advantage of the striking view. The two-story open-front lounge sat a short walk up a gentle slope from the edge of the water. From the upper viewing deck, the eye swept the river to the horizon. A telescope allowed a close view of the game hiding in the high undulating grass that covered the small islands scattered around the river. With so many enticements to an armchair safari, the hardest thing about Chiawa was to select from the variety of daily activities available at the camp. Whether on land or water, the list was seemingly endless; and cheerful, knowledgeable guides were always ready to lead the next adventure. Anglers had a raucous time taking off on pontoon boats to pit their skills against the world famous Zambezi tiger fish and the giant vundu catfish. They came back with delighted stories and photos of “the big ones” they had caught and released, a rule strictly observed at Chiawa.

My accommodation was an oversized tented suite on a raised timber platform, with an open deck facing the river. The deck wrapped around one side of the tent to become a large open-sided bathroom where an irresistible claw-footed Victorian bathtub took pride of place. While bathing, I enjoyed the sight of herds of elephants trooping from the river on their way back to the bush. A chacma baboon came to investigate and after some consideration, decided against joining me in the tub.

My stay at Chiawa was rich in exceptional moments, such as viewing the Southern Cross perfectly outlined among millions of stars in the peerless African night sky. But the most treasured experience of my visit occurred during an afternoon canoe trip along the Chilanga channel. As my guide quietly stirred the canoe in the dappled shade of overhanging winterthorn acacias, we came upon a pair of lionesses enjoying a drink a few yards away on the bank of the river. Game viewing doesn’t get any better that this!

Communications The camp used two-way radio communications. Broadband Internet access operated erratically, based on availability of a satellite connection, and was available to guests for emergency e-mail use only. Guests could also use their personal satellite phones.

Location Chiawa was located on the bank of the Zambezi River, in the heart of the Lower Zambezi National Park in southeastern Zambia, immediately across from Zimbabwe’s famed Mana Pools. It was approximately 30 minutes by air from Lusaka to either of the two airstrips serving the park: Royal and Jeki. Royal was 90 minutes up river from the Chiawa via motor boat. Jeki was located northeast of the camp, a one-hour drive away through the bush.

Owners The Cumings family has owned and operated Chiawa since it first opened in 1989.

Power There was generator-produced and solar power throughout the camp. A NW-135C adapter was necessary to use the electrical outlets (the kind used in the U.K.).

Size Chiawa occupied approximately 12 acres (48,000 square meters) within the 75 mile (120 kilometers) river frontage of the Lower Zambezi National Park. It could accommodate up to 18 guests in its nine tents, and employed a staff of 40, including seven guides and trackers.

Transportation From Lusaka, reliable charter airline flights were available daily. Chiawa provided transportation to and from the airstrips to the camp. Getting around the Lower Zambezi National Park area was either by land cruiser, motorboat, canoe, or on foot.

Year Open-Renovated Since it began operations, Chiawa has been a seasonal camp open from mid-April to mid-November. It was thoroughly refurbished each year prior to re-opening, and the object on on-going renovations. The most recent renovation was Tent Seven, completely rebuilt in 2007.

Common Areas The lounge and bar were housed in a two-story thatched, open-fronted structure with an upper observation deck that boasted a panoramic view of the river. The lounge was furnished with groupings of rattan chairs and loveseats with thick natural cotton cushions around rectangular wooden coffee tables. The bar area also included a small library with wooden chairs and tables. Framed local maps decorated the wall. A few feet away there was a thatched, open-sided dinning room set with long tables able to accommodate up to ten guests each.
Bathroom The bathroom occupied a quarter of the total suite space. It was open to the bush on two sides. It included an indoor shower with a large overhead rain showerhead, a flush toilet, double sinks, a mirrored vanity, and the whimsical claw-footed tub. Hot and cold running water was available around the clock. An additional outdoor shower was perched in the branches of the nearby winterthorn tree, doubling as a hide from where to observe the game constantly wandering by.

Room My tent (Superior Tent Number Three) was a 1,000 square foot (92 square meters) suite raised on a four foot (one meter) timber platform under thatch. An open deck ran the length of the structure facing the river. It was furnished with a canvas-upholstered love seat and a dark wood coffee table. The deck wrapped around one side of the tent to accommodate the open-walled bathroom. The atmosphere was reminiscent of the classic colonial era. All wooden furniture was mahogany. The king-size bed was swathed in mosquito netting. A credenza outlined the headboard where dual solar powered lanterns provided reading light. At the foot of the bed, a leather-upholstered bench doubled as a storage chest. Along the partition separating the sleeping tent from the bathroom, a long mirror in a carved mahogany frame hung over an overstuffed sofa. The sofa was covered in taupe canvas with gray and burgundy decorative pillows; it faced an oval coffee table. On either side of the sofa, large local pottery containers held clusters of tall, feathery reeds. On the opposite side of the tent, two luggage racks and two columns of shelving provided ample storage. A mirrored dressing table and leather upholstered stool completed the décor. The floor was carpeted with dark green tenting covered with taupe rugs.

Food The food was delicious and varied, and more varied yet were the locations where meals could be enjoyed. Breakfast was usually served buffet style around a camp fire overlooking the boat dock and the river. The dinning room was only used intermittently. My first dinner at Chiawa was a wonderful barbecue under the stars on the bank of the river. I also enjoyed a champagne brunch on a pontoon boat shaded by a canvas roof, lazily cruising along the Zambezi with buffalos and various antelopes peering at us from the banks. Meanwhile, hippos registered their objection with menacing yawns before submerging at our approach.

One constant feature of the evening meal was the “dinner serenade.” At Chiawa, dinner time was announced with a performance by the Chiawa Camp Choir: a dozen members of the staff delighted the guests with the beautiful a capella close harmonies characteristic of the vocal tradition of southern Africa.

Amenities Bathroom supplies included an assortment of Molton Brown toiletries and plush bathrobes and towels. Chiawa amenities also included daily laundry, a thermos of chilled drinking water, cans of mosquito and insect repellent spray, a flashlight, post cards and a game viewing booklet. A two-way radio was available in the room to request an escort to the common area when animals were nearby, which was most of the time, or to call with any other requirements. Use of a safe was available in the main office. All meals and beverages were included, as well as all daily game viewing activities.

Facilities A small curio shop carried a limited offering of local craft and an assortment of Chiawa-branded safari shirts and hats.

Pool A circular plunge pool, 20 feet (six meters) in diameter and five feet (one-and-a-half meter) deep overlooked the river. There were four lounge chairs with natural cotton cushions on the wooden deck surrounding the pool. Towels were available on demand.

Other Due to the proximity to wild game, children had to be at least 12 to visit the camp.

Service The service was so consistently superb from everyone and in every circumstance that it became indiscernible! The same could be said of the clockwork organization of the camp. 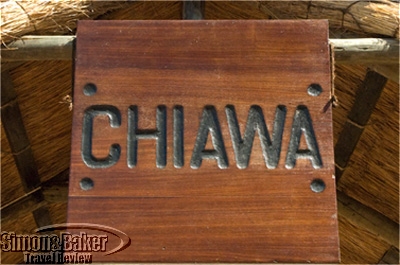 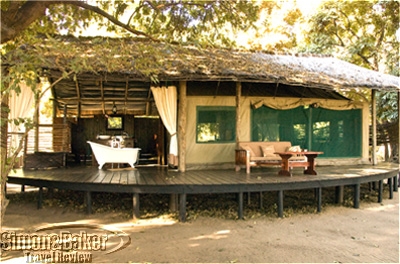 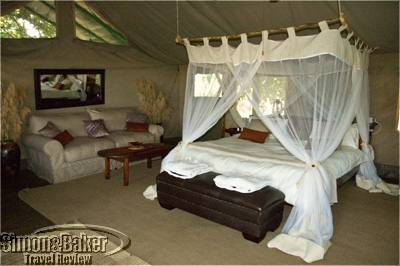 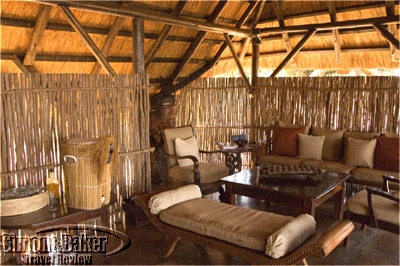 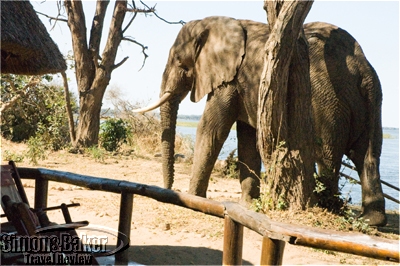 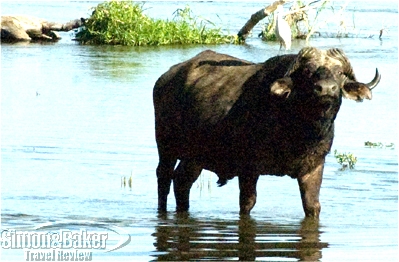 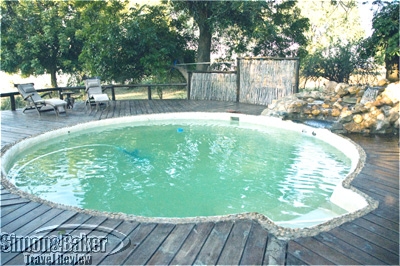