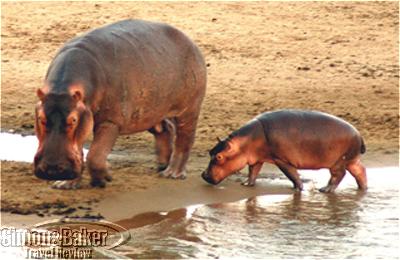 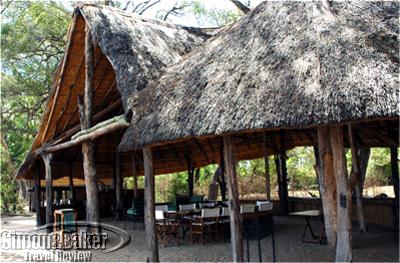 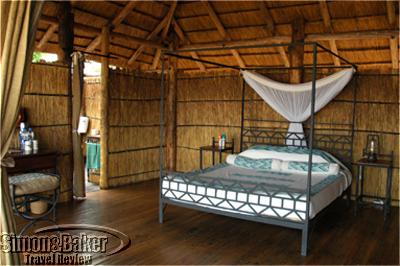 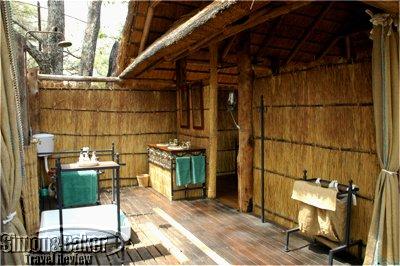 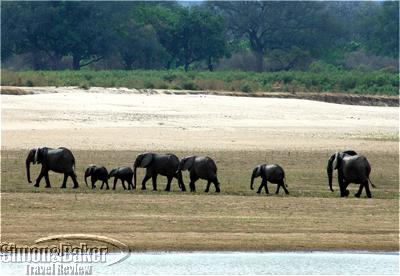 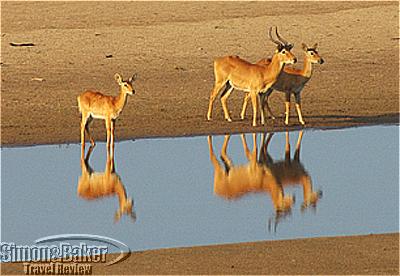 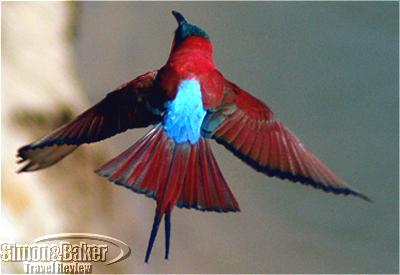 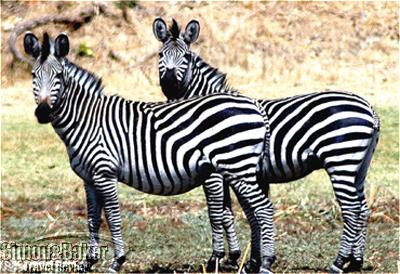 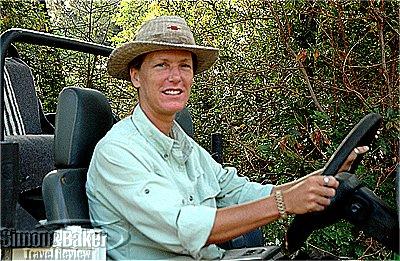 Their attentive and unobtrusive service greatly contributed to my thorough enjoyment of this exceptional camp, where the understated luxury of the accommodations enhanced the exuberant beauty of the site.


Overall Impression Chamilandu was the most intimate of all the bush camps I visited inside the South Luangwa National Park. It consisted of three guest chalets perched on eight-foot high platforms. Built in the local style with a contemporary flair, each chalet was composed of three walls sheltered by a peaked thatch roof. The fourth side of each rectangular structure was fully opened to a private deck that offered a startling 180 degree view of the Luangwa River, against the distant backdrop of the Nchendeni Hills. The guest chalets were only a few steps away from the spacious dining and lounging hut that was a welcoming gathering spot for all common activities.

Game viewing on the river was a constantly changing show, in harmony with the rhythm of the day. Even during the languid siesta hours of the early afternoon, elephants were a regular sight, as they made their ponderous way across the river. It was hard to imagine that the Luangwa River, reduced to a lazy ribbon of water when I visited at the end of the dry season, would become a 500-yard wide expanse of churning waters overflowing its banks at the height of the green season. For now, the outer bank outlined a broad sandy beach where spiral-horned great kudus came for an afternoon drink, careful to give a wide berth to a nine-foot long Nile crocodile sunning itself at the edge of the water.

The camp’s privileged location on the river ensured outstanding game viewing on walks and drives nearby, and offered an excellent close-up view of the abundant water-fowl population. The camp’s resident guide played a major role in setting the overall style and quality of experience for the guests. Freya Reder, a native of Southern California who had been a guide in the park for almost a decade, was a soft-spoken woman with broad knowledge of the fauna and flora of the area, which she generously shared at every opportunity. The entire Chamilandu team was equally hospitable. Their attentive and unobtrusive service greatly contributed to my thorough enjoyment of this exceptional camp, where the understated luxury of the accommodations enhanced the exuberant beauty of the site.

Location Chamilandu was located deep inside the Luangwa National Park, in a remote location on the bank of the Luangwa River, a two-and-a-half-hour drive from the Mfuwe entrance to the park.

Owners The Bushcamp Company, owned and operated by Andrea Bizzaro and Andy Hogg

Size Chamilandu occupied five acres within the 3,500 square mile South Luangwa National Park. It could accommodate up to six guests in its three guest chalets, and employed a staff of eleven.

Transportation Mfuwe could be reached by air from Lusaka and Livingstone. Road transfers to and from the airport were arranged by the Bushcamp Company, who owned and operated the camp.

Year Open-Renovated Originally opened in 1999, Chamilandu is closed and dismantled each November at the start of the rainy season. It is rebuilt prior to re-opening in May at the start of the green season. Building materials and furniture are replaced or refurbished as needed at that time to ensure that the camp remains in perfect condition.

Common Areas The dining and sitting areas shared a spacious open-walled structure built at ground level and covered by a steep thatched roof. It offered an expansive view of the river. A long mahogany dining table surrounded by matching director’s chairs stretched with white canvas separated the lounge and bar from the more intimate seating corner at the far end of the space. The latter included a bookcase that held the camp’s small collection of reference books on the local environment. The main seating area was furnished with wrought iron couches and armchairs upholstered with plump dark green canvas cushions, arranged around a large square mahogany coffee table. It was the starting point of all the activities at the camp and an inviting place to socialize.
Bathroom The bathroom ran the length of the side wall and was approximately eight feet wide. While its privacy was ensured by eight-foot high reed walls, it was open to the sky and to the river, for the ultimate “shower with a view.” There was a shower with a four-foot square porcelain base, with hot and cold water; double sinks with mirrors; a flushing lavatory and a laundry hamper. There were ceramic pump bottles of biodegradable hair and body care products by the sinks and in the shower area, and a large wrought iron towel rack holding four dark green bath towels. The bathroom, shaded by the overhanging branches of a large ebony tree, offered on-going entertainment: it was home to a colony of yellow baboons that seemed to be in constant state of domestic discord!

Room My chalet (Number One) was an inviting open-fronted contemporary structure of local woods and reeds, sheltered by a thatched roof. Built on a 1,000 square foot wooden platform raised on stilts about eight feet above the bank of the river, it offered a breathtaking panoramic view of the Luangwa River and the Nchendeni Hills beyond. The open side of the room extended toward the river to form an eight-foot wide viewing deck with a double-wide lounge chaise. It was an ideal spot to relax while observing the game that came to the water to drink and bathe. A king-size bed flanked by two bedside tables and draped with mosquito netting was centered on the back wall. A large wooden storage chest and a six-foot tall pillar of shelves fitted with rattan baskets occupied the outer wall that separated the room from the access stairs. The third wall held the doorway to the adjacent private bathroom and a writing desk topped by a large oval mirror that could also serve as a dressing table. A small on-site gas generator produced sufficient electricity to operate the electric outlet that could be used to recharge camera batteries, as well the electric lanterns that provided lighting for the room at night.

Food Meals were timed to accommodate the scheduled game hikes and drives. The food was excellent and varied, with portions generous enough to satisfy the most robust appetite. Early morning breakfast was served in front of the lounge prior to the morning hike. It included hearty home-made breads, toasted on-demand over a coal brazier, muffins, several types of jams, juice, coffee and tea, and a stunning sunrise over the Luangwa River. The two main meals were served at the large common table in the dining area: the midday brunch was buffet-style, offering a variety of salads, quiches, and meat dishes. Dinner was around 8:30 pm, served upon return from the nighttime game drive. It was plated and formally served. In addition to the three main meals, mid-morning tea and home made cookies were served during the morning hike. The sundowner break was a traditional feature of the late afternoon excursion, with a choice of soft drinks, alcoholic beverages and light hors d’oeuvres.
Amenities At Chamilandu, amenities and services included daily laundry. A thermos of hot water was always available in the room, with a complete tea and instant coffee service. There were complimentary bottles of water and spay cans of insect repellent in the room. Freshly brewed coffee and tea, soft drinks, local beers and wines and other alcoholic beverages were available in the common areas.
Game Viewing During my stay at Chamilandu, I saw: elephant, lion, buffalo, hippo, Thornicroft’s giraffe, Crawshay’s zebra, warthog, yellow baboon, honey badger, vervet monkey, impala, puku, kudu, bushbuck, waterbuck, civet, genet, banded mongoose, bushy-tailed mongoose, elephant shrew and Nile crocodile. Bird sightings included: yellow-billed stork, saddle-billed stork, grey heron, crested crane, African spoonbill, marabou stork, sacred ibis, red-billed ox pecker, Cape turtledove, red-billed buffalo weaver, blue waxbill, pied kingfisher, fish eagle, tawny eagle, African hoopoe, lilac-breasted roller, water dikkop, whitebrowed sparrow-weaver and carmine bee-eater.
Activities Chamilandu offered early morning and sunset walks, as well as evening drives in an open-top all-wheel drive vehicle, using a powerful spotlight to view nocturnal animals. Morning and sunset drives could be substituted for the walks by consensus among the guests. In addition to our guide Freya, all excursions were accompanied by one armed ranger and one assistant guide carrying a large backpack (if on foot) with bottled water, beverages and snacks.
Other Due to the proximity to wild game, children had to be at least 12 years old to visit the camp.
Cleanliness Excellent

Service Excellent. The staff never failed to be on hand with a warm smile, chilled towels and glasses of cool fruit juice to greet the arrival of the Land Rover, whether it brought arriving guests or returned from an excursion. The room was serviced twice a day. Any laundry left in the basket in the morning was returned freshly laundered and ironed in the evening.