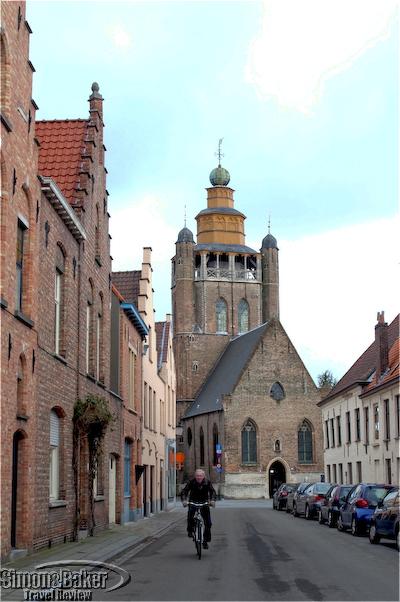 This timeless bucolic serenity will now remain my favorite memory of Bruges, until I find yet another opportunity to return.


Overall Impression Bruges is a city where Europe’s medieval past lives on. Suspended in time centuries ago, its historic center is a mosaic of willow-shaded canals lazily wending their way around ancient homes and public buildings. Humpbacked stone bridges lead to narrow cobbled backstreets that open onto picturesque squares and rows of whitewashed almshouses. Roofscapes of high-stepped gables bristle with towers and steeples. With most of its medieval architecture intact, the 430 hectare (1.6 square mile) center of Bruges was designated a United Nations Scientific and Cultural Organization (UNESCO) World Heritage Site in 2000.

Bruges owes its fortunes to the sea. The first records of its existence reach back to the first century B.C. and Julius Caesar’s conquest of the area. Fortifications were built to protect the coastal settlement from North Sea pirates. These would be expanded over the next millennium to create the most important citadel of the Flemish coast. By the time it received its city charter in 1128 Bruges was poised to become a major trading link between the Flemish countries and the Mediterranean. Huge amounts of capital flooded the city, heralding a golden age that would over the next three centuries develop Bruges into one of the commercial and artistic hubs of Europe. Until the late fifteenth century when the Zwin River silted up. Deprived of its access to the North Sea, the city became quite literally a sleepy backwater town.

Bruges slept for 400 years. With the advent of twentieth century mass travel came the realization that the city’s long-ago demise as a commercial powerhouse was posterity’s gain. Today, tourism is Bruges’ biggest industry, making it one of Western Europe’s most visited medieval cities and one of the biggest attractions in Belgium. It is estimated to welcome over two million visitors a year. Many come for the day to enjoy the unspoiled gothic architecture of its churches, palaces and public buildings and to bask in the romance of a bygone era. My personal preference whenever visiting is to plan for an overnight stay at the very least. The historic center is a treasure trove of centuries-old mansions reborn as cozy boutique hotels that combine the latest in contemporary comfort with timeless charm to enhance the romantic mood of the visit. As dusk descends on the city, the ancient buildings are bathed in the glow of soft floodlights, their reflection mirrored in the stillness of the canals. The daytime visitors ebb away. In the quiet streets, the echo of steps on cobblestones and muted voices of occasional passers-by mingle with carillon chimes marking the evening hours. This is when Bruges most reveals itself as I imagine it to have been at the peak of its medieval grandeur.

I have visited Bruges on several occasions over the years and find it an equally charming destination, whether for a family excursion, a romantic weekend or a relaxing solo retreat. I especially enjoyed my most recent visit, a three-day late-winter girlfriends getaway when we had the city virtually to ourselves. The magnificent gothic rooflines were detailed against a crystalline blue sky. Regal swans were gliding undisturbed along the canals. In every park and garden, the first daffodils peered among wisps of tender new grass and the still barren trees were filled with birdsongs. This timeless bucolic serenity will now remain my favorite memory of Bruges, until I find yet another opportunity to return.

How To Get There The easiest access to Bruges was by train. There were frequent trains throughout the day between Brussels and Bruges. The journey took one hour. Trains from Amsterdam or Paris took three hours. A number of international air carriers offered direct flights to Brussels, where the airport had its own railway station.

Technology High-speed Internet connectivity was widely available. There was GSM cell phone reception wherever I went.

Transportation The best way to get around Bruges was on foot. The historical center was sufficiently compact as to make it easily walkable. Visitors arriving by road were urged to park their vehicles outside the city from where bus transportation was available. Within the city, the only mode of public transport was by buses operated by the Flemish public transport company (De Lijn) . There were taxis stands at the train station and at the market. Bicycles were a common sight around the city center, where a number of areas were restricted to foot and bicycle traffic only.

Shopping And Souvenirs Bruges was full of shops catering primarily to tourists, ranging from the usual souvenirs places to elegant antique shops, galleries and fashionable boutiques. The town specialties, chocolate and lace, were ubiquitous in the center of town, each sold in dedicated stores and reasonably priced. However, virtually all the lace now sold in Bruges is machine made in the Far East. For the real thing, it was necessary to go to the boutique of the Lace Museum or the lace school, and be prepared to pay considerably more. On the other hand, most chocolates were produced locally and their standard was consistently high, whether I indulged in the national brand name stores or one of the reputed local artisanal shops such as Chocolatier Van Oost or Stephan Dumon Chocolatier. My biggest challenge in Bruges was never to find great chocolates but to keep away from them!
Tourism Highlights My favorite pastime was to simply stroll along the picturesque streets and take in the architectural wonders, from the charming to the grandiose, revealed at every turn. However, “guidebook musts” included:
Burg Square While the Grote Markt was the commercial hub of the city, the Burg (Town Square) was, and remains, its administrative core. It is also a showcase of Europe’s various architectural styles. Its gothic town hall dates back to 1376 and is one of the most striking buildings in Bruges. Next to it, the Old Civil Registry completed in 1537 is a fine example of renaissance style. On its left is the former Court of Justice, a neo-classical building (dating back to 1727) while on the opposite side of the square the Deanery (dating to 1662) the former home of the Deans of the Saint Donatius Church is in the baroque style. Meanwhile, tucked away in the corner next to the town hall, the Basilius church (1149) is recognized as one of the best-preserved romanesque churches in West Flanders.

Church Of Our Lady This grand gothic church (built in the thirteenth through fifteenth centuries) is especially notable for its brick tower. At 401 feet (122 meters) it remains to this day the tallest structure in Bruges, and the second tallest brickwork tower in the world (after the Saint Martin’s Church in Landshut, Germany). The church is home to a white marble sculpture of the Madonna and Child by Michelangelo.

Cloth Hall And Belfry By far the most easily recognized site in town was the Lakenhalle (Cloth Hall) with its iconic 272 foot (83 meter) belfry that has dominated the Grote Markt (Market Square), the grandest square and commercial heart of medieval Bruges since the thirteenth century. Used as city archives and watchtower at the time, the belfry is now open to the public. The hardy souls who climb the 366 steps of its narrow wooden stairs are rewarded with a spectacular view of the city and surrounding countryside.

Greoninge Art Museum The cradle of Flemish Art during the northern renaissance, Bruges has retained many works of master painters known as the Flemish Primitives such as Jan van Eyck, Rogier van der Weyden, Hugo van der Goes and Gerard David. While some their paintings are sprinkled around the churches and public buildings of the city, the most important collection can be seen at the Groeninge Museum.

Jerusalem Church Located in a quiet neighborhood north of the city center, this small church with its unusual octagonal tower is still privately owned by the descendants of the Adorni family, merchants from Geona, Italy who settled Bruges in the thirteenth century. Completed in 1470, the church is a replica of the Holy Sepulcher in Jerusalem (including a faux tomb of Christ). It consists of a nave, with the tomb of Anselm Adornes (who died in 1483) right in the center of it, and a high choir. It features an elaborately carved pulpit and lovely late fifteenth century stained glass windows. There was a small entrance fee that also covered the visit of the Lace Museum in the former Adornes mansion next door.

Beguinage An walled religious community founded in the thirteenth century by beguines (women who wanted a life dedicated to God without retiring from the world), the Beguinage is a pastoral retreat at the southern edge of the historic center. It is surrounded by a canal straddled by a humpbacked bridge leading to the gated entrance. The interior consists of a park shaded by soaring trees, surrounded by some 30 individual homes, many with small walled-in front gardens, and a sixteenth century church. The park was open to the public, as was the church and grandest of the homes (formerly the home of the Grande-Dame who ruled over the Beguinage). The Beguinage is now inhabited by Benedictine nuns. Silence was required from all visitors, making the park a serene and meditative haven within an easy walk from the city center.

Cost of visiting For American travelers, with the exchange rate of the dollar versus the euro very unfavorable at the time of this writing, prices were generally expensive. 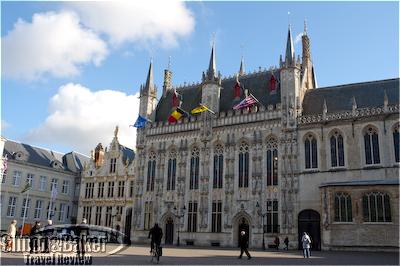 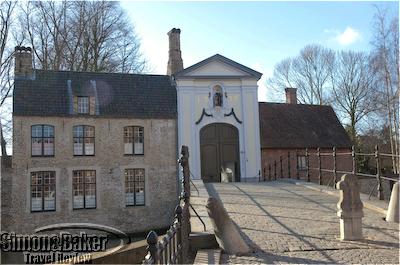 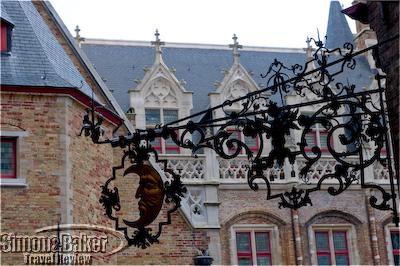 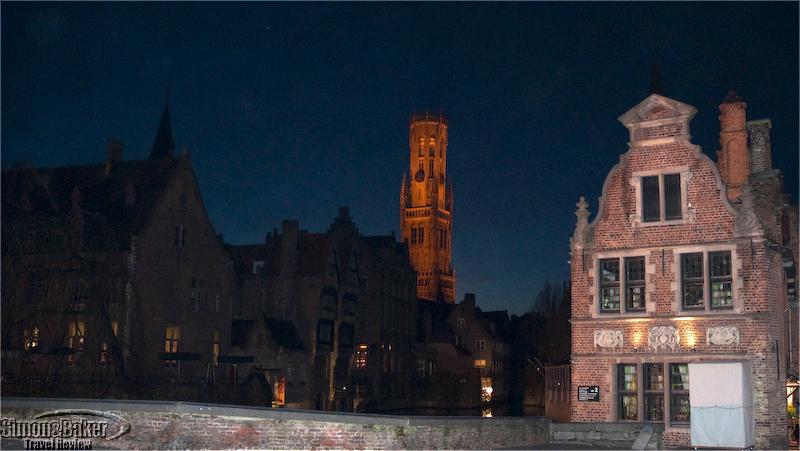