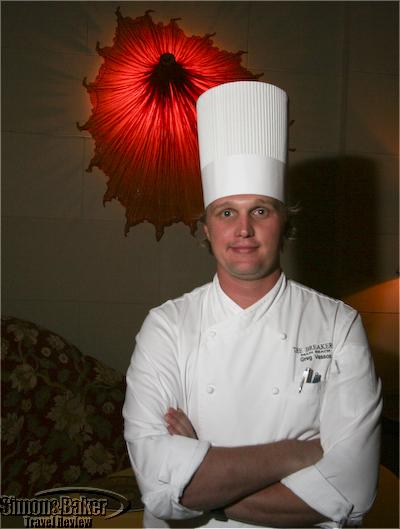 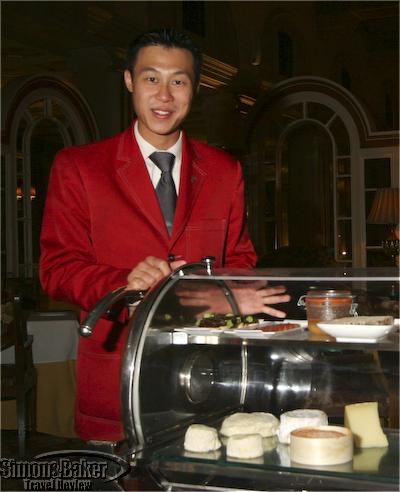 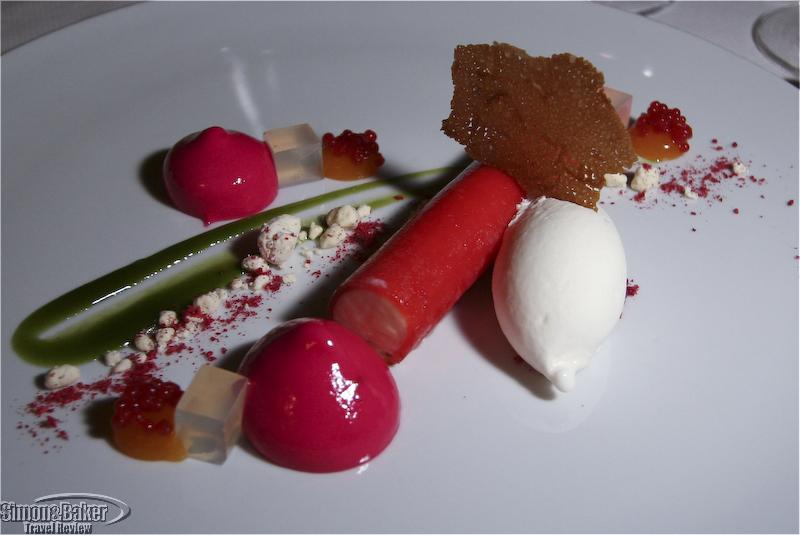 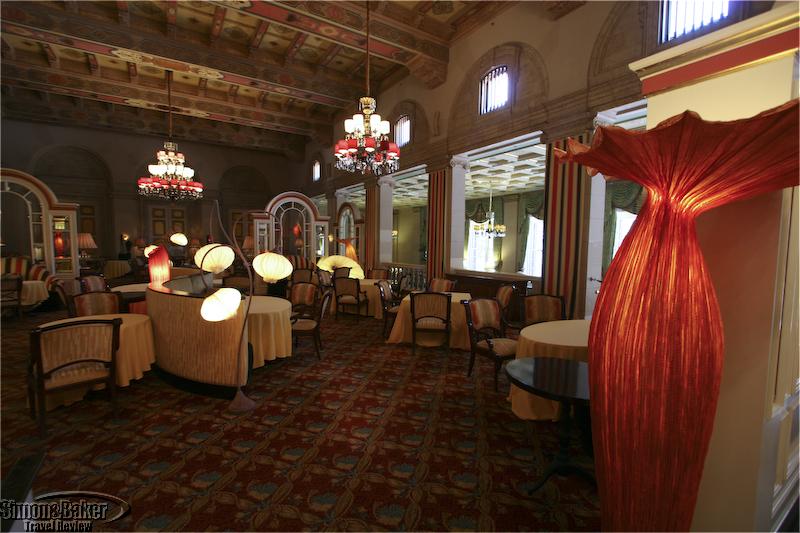 The next time we stay at the resort or find ourselves in Palm Beach with a special occasion to celebrate we look forward to a return visit to L’Escalier.


Overall Impression L’Escalier, the flagship restaurant of the Breakers Palm Beach resort, offered a well prepared, well served, molecular gastronomy meal in an elegant, intimate and contemporary setting. Our midweek end of season visit was rewarding. We especially enjoyed the luxury of dining in a quiet dining room with attentive and guest centered service. Dinner at L’Escalier was the culinary highlight of our three night stay at the Palm Beach resort.

We enjoyed Chef Greg Vassos playful and artfully presented Tasting Menu dishes. The staff remained at a discrete distance, allowing us privacy during the meal. They were attentive and friendly and always there before we were aware we needed anything.

The restaurant’s young and enthusiastic master sommelier was also in attendance, pairing wines to the chef’s menu. The next time we stay at the resort or find ourselves in Palm Beach with a special occasion to celebrate we look forward to a return visit to L’Escalier.

About The Chef De Cuisine A fan of molecular gastronomy, Greg Vassos had entered his second season at L’Escalier when we visited the retaurant. He strives to create “a modern, highly engaging French dining experience, one that enchants the eyes and captivates the palate, and transforms a great evening out into a truly special occasion”.

Chef Vassos joined The Breakers Palm Beach in 2008, after working at The Brasserie in Grand Cayman. Raised in Boston, he started cooking as a youth during summer jobs before attending Johnson & Wales University. Prior to joining L’Escalier he had an opportunity to learn from chefs Eric Ripert, Bruno Menard and Sergi Arola; and he worked at the French Laundry in Napa Valley, Arola in Barcelona, Spain, The Dining Room at the Ritz Carlton in Buckhead, Georgia, Willow Creek Bistro in Aspen, Navio at Half Moon Bay, California; as well as restaurants Blue, and The Brasserie in Grand Cayman.

Chef Vassos, who seeks to personalize his cuisine by utilizing the freshest local ingredients, developed his culinary style, according to promotional materials, when he worked for Arola, a former sous chef at the famous molecular cuisine bastion El Bulli.

Gomez’ duties include helping to manage 18 employees and the oversight of the resort’s 28,000-bottle collection of fine wines. He is directly involved in procuring wines for the resort’s nine restaurants and banquet operations. Gomez began his wine career in 2001 after taking a mandatory Wine Class offered at The Breakers. In March 2007, he became master sommelier, and according to promotional materials, he is the first Mexican native in the history of the Court to attain the master sommelier recognition.

Executive Chef Anthony Sicignano, the executive chef of Restaurants at The Breakers Palm Beach, was in charge of the resort’s dining collection including L’Escalier.

Location In the main building of The Breakers Palm Beach resort, next to the Tapestry Bar.

Opened-Renovated The restaurant was established in 1926. The most recent renovation was in 2009 when the room and table tops were updated.

Size The 5,000 square foot restaurant employed 30 staff and was able to accommodate 120 guests.

DÉCor-Ambiance L’Escalier was decorated to evoke an intimate ambiance with grace and sophistication and meant to be reminiscent of the grand residential style of France’s most elegant chateaux. Decorative contemporary touches included curved banquettes, avant-garde light fixtures, tables draped in floor-length linen and adorned with Rosenthal Versace china, Christofle silver, and Riedel crystal as well as carved mahogany-accented, banquette-style sofas in rich cabbage rose fabric and anchored by end tables. The most noticeable accents were Aqua Flowers, large hand woven silk flowers made by a Tel Aviv artist.

The open kitchen and its staff were visible on one side of the dining room. We sat side by side on a banquette in the far corner of the dining room. From our table in the back of the room we could see the whole restaurant and the Tapestry Bar in the background. I would request that table in a future visit to the restaurant for its discreet and quiet location with an outstanding view of the room. A staircase of candles adorned our table.

Cellars Wine And Alcoholic Beverage Selection L’Escalier’s exceptional wine list is comprised of more than 1,600 wine selections. The sommeliers also sustain a 7,800-bottle display Wine Cellar, which showcases a fraction of The Breakers resort’s 28,000-bottle collection. L’Escalier has earned Wine Spectator magazine’s highest honor, the Grand Award, every year since the award’s inception in 1981. Philip was the tenth woman in the world to earn master sommelier certification.

Meal Although we arrived at L’Escalier directly from the Tapestry Bar across the hall where we admired the mahogany bar imported from London, visited the “cellar” and had a glass of champagne, our affable sommelier tempted us with a Midori Martini and an aromatic Elderflower and Gin Martini (my favorite). Pre-appetizers of cobia, cucumber and radish arrived shortly after we sat down. Bread choices included brioche, baguette, and chocolate cherry flavors served with Vermont butter. We liked how the flavors blended together in the first dish made up of olive oil crunches, basil gelee, mozzarella globule, balsamic vinegar beads and tomato bites. Then the Tasting Menu dishes arrived. We had Lobster “Causa.” Its distinct and spring light flavors were pleasant: Compressed Pineapple Carpaccio, Avocado Pudding, Espelette Potato, Red Pepper Ribbon, Quail Egg, Flavors of the Tropics. It was served with a 2006 Chateau du Montfort Vouvray from the Loire Valley, France.

We also had a selection from the cheese cart of epoise with candided shallots and truffled pecorino served with baguette, lavash and chilled port. We concluded the meal with two lovely desserts Blood Orange Dessert and Chocolate and Peanuts with Ferrari Carano “Eldorado Noir” served with a 2008 Black Muscat from the Russian River Valley, California.

Other The restaurant was recognized with AAA Five Diamond Award every year from 2002 to 2010, the DiRoNA Award, and the Forbes Travel Guide / Mobil Travel Guide Four-Star Award both every year between 2000 and 2010.
Date Of Review May 2010

Service Derin and Mac, our young servers distinctive in their red jackets, were attentive, well informed and friendly. My napkin was replaced with a fresh one while I went to the ladies room. 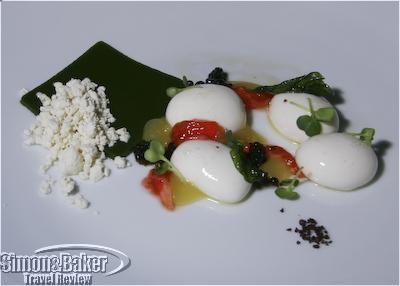 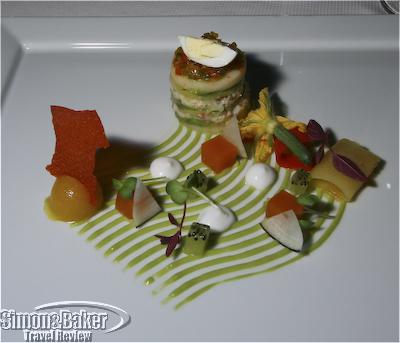 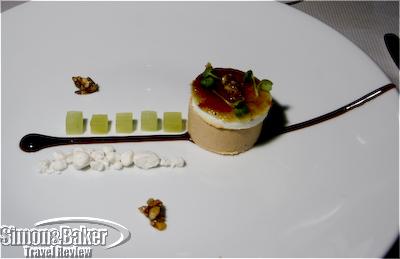 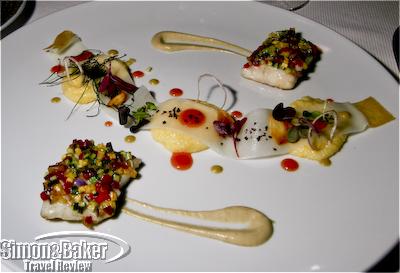 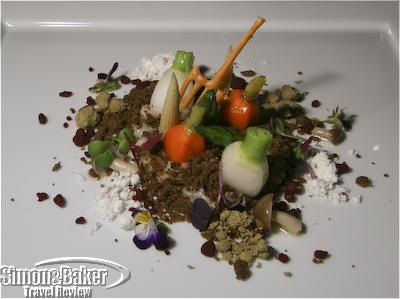