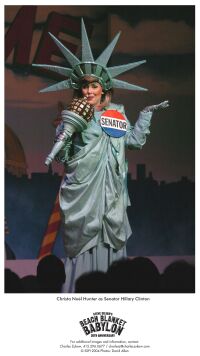 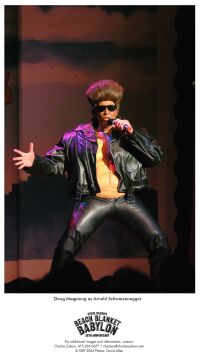 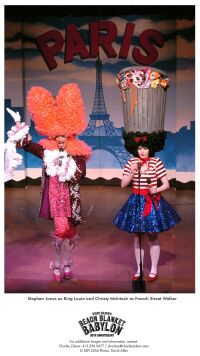 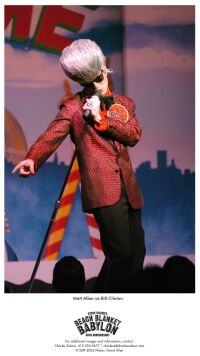 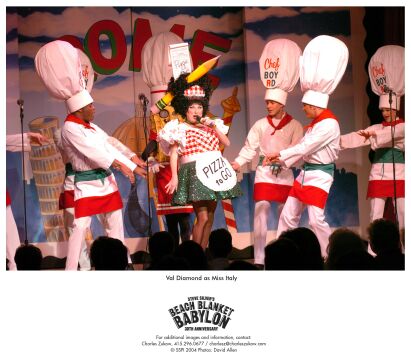 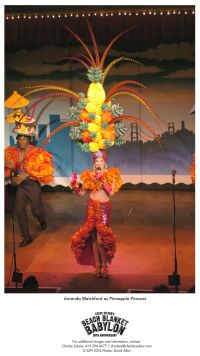 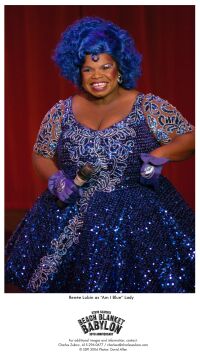 We found the tongue-in-cheek parody lively, colorful, and funny; the perfect show for our first weekend night in San Francisco in many years.


Overall Impression Billed as “the nation’s longest running musical revue,” Beach Blanket Babylon®, an irreverent musical centered on Snow White looking for her prince (around the world) spoof, was the perfect entertainment for our jetlagged souls. All day travel and a three-hour time disconnect made us tired and sluggish; the Beach Blanket Babylon performance jazzed us up. We walked out smiling and ready for the scrumptious dinner we had planned.

We weren’t sure what to expect from the adult (only adults 21 and over were admitted to evening shows) 30-year-old show that began in the 1970s with street performers. Its popularity proven by more than 11,000 performances and 4.5 million guests, the Beach Blanket Babylon® show we caught was creative, vivid and entertaining. The experienced performers seemed to enjoy each skit full of outrageous hats and spectacular costumes.

Description a zany and satirical musical with Snow White as the central character of a current events based series of spoofs, including 80 songs, of celebrities, sports figures, politicians, poodles, a French king and any number of wacky personalities.

Handicapped Access BBB: “We accommodate wheel chair users on the main floor of the theater, sign language interpreted performances are held twice a year in April and November, there are assistive listening devices for hearing impaired patrons, and visually impaired guests may request a Braille program.”

Size seating for 393 in a two-story building and a total of 8,000 square feet of space

Transportation driving or taking a taxi were our best options

Other Established by Steve Silver in the 1970s, the adult oriented show welcomed minors for Sunday matinees only. Infants were not allowed. Tickets were nonrefundable and non changeable. All sections were sold on a first come first served basis except for Box & Center Balcony Reserved seats. The show boasts a long list of celebrities who have attended a performance including Hollywood stars and directors, comics, politicians, royals, singers, athletes and designers. The name of the show came from Steve’s admiration of Frankie Avalon and Annette Funicello beach blanket movies and the Babylon came from “his fertile imagination.“ 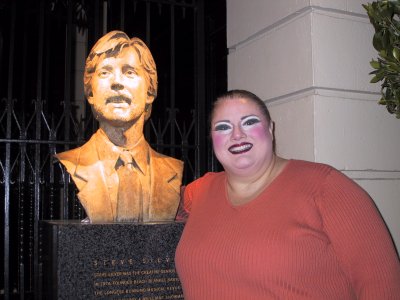