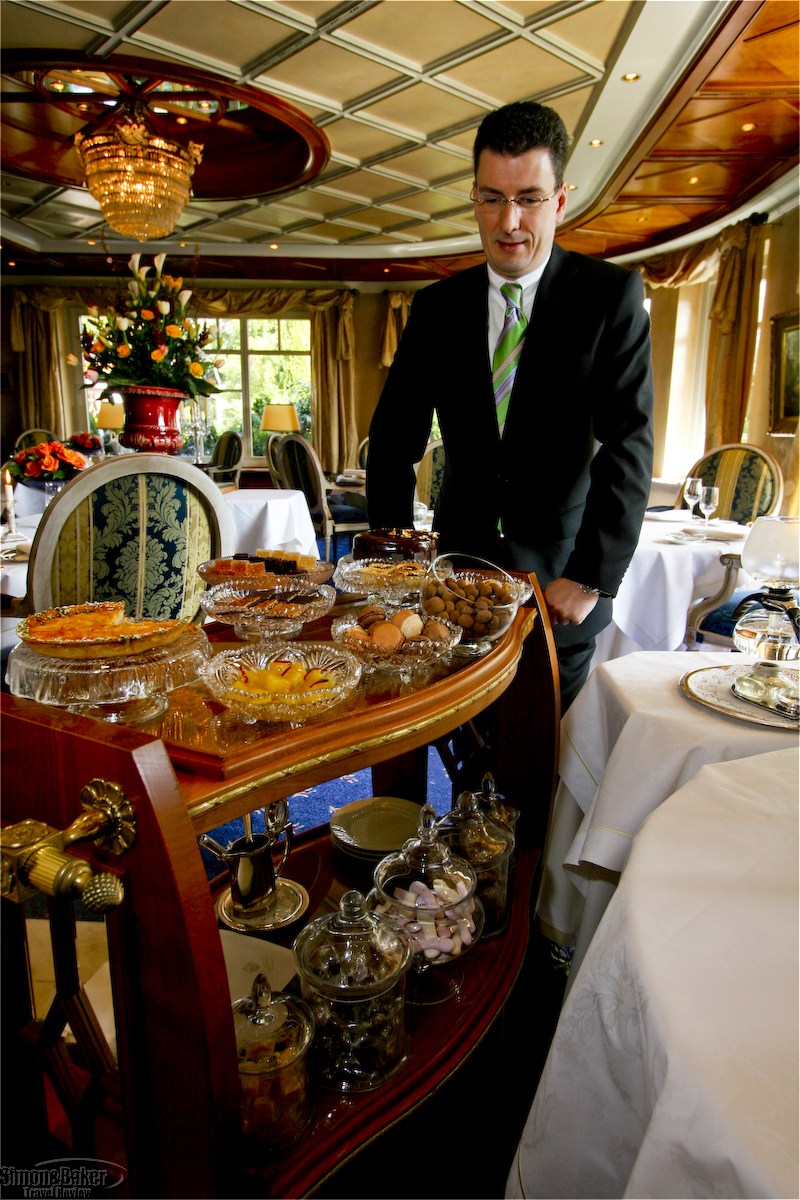 Bareiss Restaurant will be a must stop anytime we’re in the area.


Overall Impression Arriving at the Bareiss Restaurant at the tail end of a two-week visit of Southwestern Germany where we had been repeatedly surprised with the quality and refinement of the restaurants, we had high expectations of this establishment. We were delighted to find the restaurant met and surpassed them with room to spare.

We thoroughly enjoyed our visit to the small restaurant tucked discretely within the outstanding Bareiss complex. The elegant royal blue décor and window framed dining room looked handsome and welcoming in the partly sunny winter light. Our corner table in the rear of the dining room afforded us a splendid view of the entire area and privacy at the same time.

Staff, led by Restaurant Manager Thomas Brandt, were cordial and service oriented. Chef Claus-Peter Lumpp selected a surprise tasting menu and delighted us with all his choices. Jürgen Fendt, the talented sommelier, matched the dishes with well suited wines to make the meal a complete success. Bareiss Restaurant will be a must stop anytime we’re in the area.

About The Executive Chef Born in 1964, Claus-Peter Lumpp apprenticed at the Kurhotel Mitteltal (later Hotel Bareiss) and worked in the military and at a variety of European establishments, including the Val d´Or in Guldenthal, before returning to the Kurhotel Mitteltal in 1987. He also worked under Chef Alain Ducasse at Louis XVI restaurant in Monaco.

He also worked as saucier with Günter Scherrer at Restaurant Victorian in Düsseldorf; earned a diploma of head chef as chef of the restaurant at Kaminstube; worked at Petermanns Kunststuben in Zurich, at Tantris with Heinz Winklers and Eckart Witzigmann. He worked with André Jaeger at Rheinhotel Fischerzunft in Switzerland; and with Ezio Santin at Antica Osteria del Ponte in Lugagnano. In the spring of 1992 he took over the kitchen at Restaurant Bareiss.

Head Sommelier Jürgen Fendt, a native of Aschaffenburg, Bavaria received training as a restaurant manager at the Hotel Goldener Hirsch between 1984 and 1987. After that he worked as Commis de rang at Ausbildungsbetrieb, siehe oben and later at the Hotel Colombi Freiburg im Breisgau. He worked as Grundwehrdienst in the military and at as chef de rang at Landgasthaus Krone Schlier bei Ravensburg. He worked as sommelier at Restaurant Zum Alten Fischertor, Augsburg; Restaurant Die Ente vom Lehel im Hotel Nassauer Hof in Wiesbaden; Restaurant Sonnora in Dreis / Südeifel; Hotel Deidesheimer Hof und Restaurant Schwarzer Hahn

Deidesheim; and as restaurant manager at Hotel Burg Wernberg in Wernberg-Köblitz before taking the job of head sommelier at Bareiss Restaurant.

Location Within Bareiss complex in the town of Baiersbronn in the German Black Forest.

Opened-Renovated The restaurant opened in 1983. It was redecorated in 2008.

Size The 70 square meter restaurant had a staff of 15 (six service and nine kitchen staff) and could accommodate up to 32 guests.

DÉCor-Ambiance The newly redone restaurant was decorated in a Louis XVI style. The ceiling and walls had wood, the carpeting and chairs were royal blue. There was a large flower arrangement in the center of the dining room. Christophle silverware and Laligne knives added sophistication to the table.
Cellars Wine And Alcoholic Beverage Selection The restaurant had more than 1,000 labels of wines and spirits available; of those 220 of them were available in half-bottles. There were also 70 different champagnes and 65 digestives. The restaurant’s humidor stocked 20 brands of cigars.

Meal To prepare for our surprise four course tasting menu we had some Diel German sparling wine which was laced with hints of wood and coin. To accompany our bubbly wine the staff brought us four bite size morsels: tuna tartar, guinea fowl, king fish sushi with beet juice rice, and ravioli of cheek of veal. We were sampling the second of those when our young servers brought a salmon cauliflower combo in a spoon. Next there were amouse bouche of young ox followed by monk fish and octopus. Bread choices included: baguette, sour dough, saffron, wheat, parsley and milk.

Desserts were equally ambitious and just as rewarding to the palate: Cube von Vollmilchschokolade und Karamell mit Banane , a chocolate mousse with a crunchy caramel center served with caramelized banana and ice cream; and Variation von Rhabarber und Mascarpone , a rhubarb dessert with mascarpone. After dessert we had a cappuccino and a green tea. My green tea was prepared in contraption set next to our table consisting of a glass tea pot held over an open flame. The hot beverages were accompanied by mousse towers with salt caramel and an ice cream with pistachio garnish (a favorite) as well as a selection of bite size candies from a cart. We tried the sesame tuiles , marshmallow, chocolate and caramel tarts. All were excellent.

Service Staff were attentive and service oriented, translating to English and sharing explanations on our dishes whenever possible. In addition to the restaurant manager and sommelier, we were looked after by Stephanie Bosch, assistant restaurant manager, Dominik Benz, Michael Köhle and Philip Reusch. The restaurant received the 2008/2009 fourth place award for service team from Der Feinschmecker . 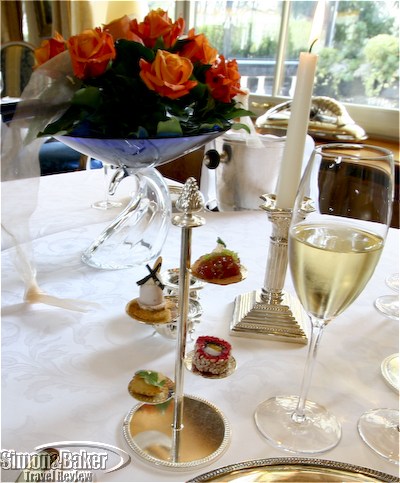 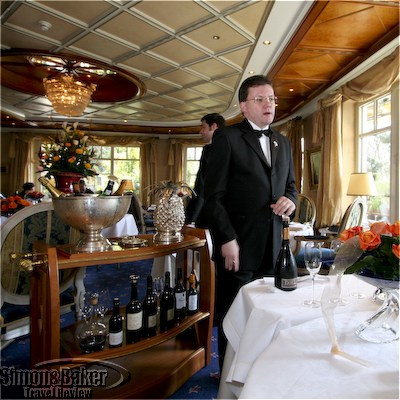 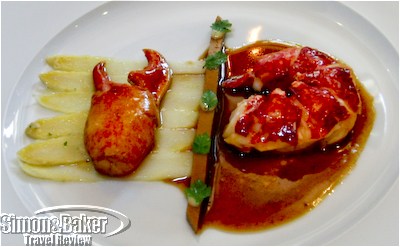 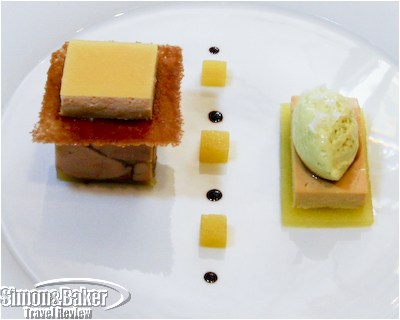 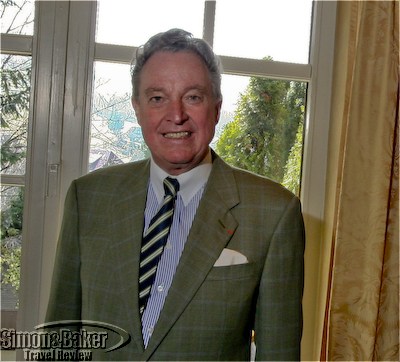 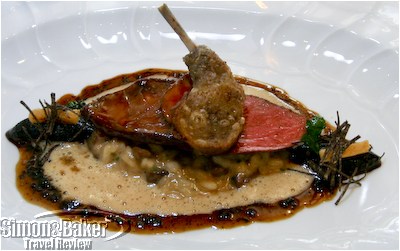 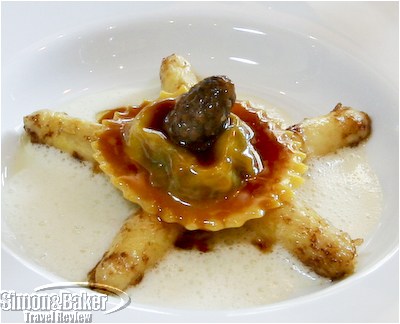 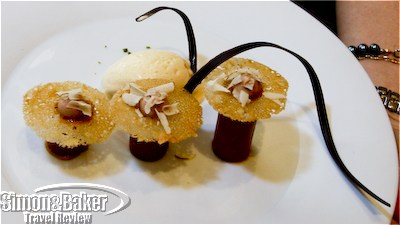 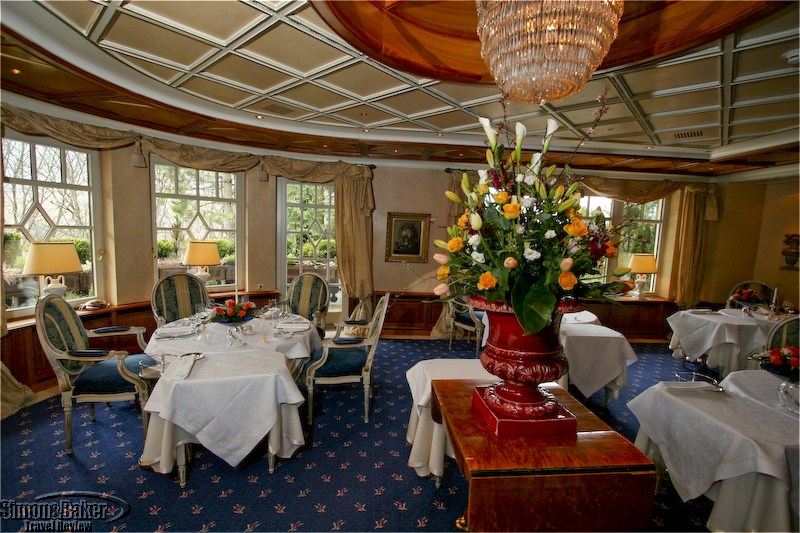