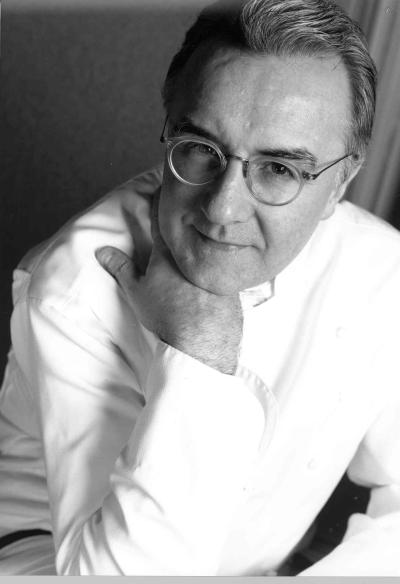 The intimate ambiance and details like handbag stools, an after dinner sweets and candy trolley, a discreet and knowledgeable wine steward, and a souvenir brioche upon departure can make ADNY ideal for a special occasion or important meeting.


We have been informed that this restaurant closed in 2008.
Overall Impression : Dinner at Alain Ducasse’s New York restaurant was well prepared and well served. It was as close to authentic gourmet French food as we have had in the U.S. For those able to appreciate the nuances of an elaborate gourmet meal; and willing to spend the time and resources – dinner could easily exceed $300 per person – to enjoy it, ADNY would be an obvious choice.

In a city where several seatings a night are the norm, ADNY stood out for its one seating policy. It allowed diners to savor and stretch out the multiple course dinner over several hours. The professional, discreet, and customer oriented staff combined with the delicious food and ambiance provided the setting for a wonderful evening. The intimate ambiance and details like handbag stools, an after dinner sweets and candy trolley, a discreet and knowledgeable wine steward, and a souvenir brioche upon departure can make ADNY ideal for a special occasion or important meeting.

About The Chef Alain Ducasse received the 2002 GQ “Men of the Year” Best Chef Award; was inducted into the James Beard Foundation’s 2002 “Who’s Who of Food and Beverage in America;” was named Bon Appétit 2001 “Chef of the Year;” and received the “Finest Chef in the World” award from the American Academy of Hospitality Sciences in March 2003.

Chef Alain Ducasse to define and oversee the kitchen and restaurant

Wine And Spirits Details : A broad selection of domestic and imported wines and champagnes, including a number of “finds.”

Food : The meal began with fluffy cheese filled pastry amouse bouche pre-appetizers. The light flavor was complimented by a glass of 1996 Drappier Grand Sendrée rosé champagne. The warm Alaskan salmon with osetra caviar with a “belle vue” garnish was next. It was accompanied by a glass of light 2000 Cru 22 Sagpond Chardonnay from The Hamptons, New York. The lightly seared Maine shrimp in a clear consomé was a favorite. A 2000 Chateauneuf du Pape Clos des Pontifes was a sound accompaniment. A well prepared squab (pigeon) with duck foie gras, green asparagus and black olives was the final entrée. The wine master’s selection for the squab was an evanescent American 2001 Kluge Estate from Albermarle County.

A Clementine and imperial tangerine sorbet with bitter/sweet chocolate was the dessert for chocolate lovers. With it came a memorable Slovenian 2001 Tilia Adelajda Vipavska Dolina yellow Muscat. A candy trolley full of tempting choices including pastries, hard candy, and an apple caramel dessert, was brought over. In it were the lightest, most delicious marshmallows ever. A post dinner tasting revealed a tasty naturally flavored citrus lollipop.

Conference Facilities-Private Meeting Rooms Two private rooms available. One seated a maximum of 12; another adjacent to the kitchen for up to six diners.

Service In spite of a nearly full dining room (both private meeting rooms were occupied), a bevy of waiters tended to a diner’s every need. Other than a slight cold shoulder upon arrival and the disappearance of most of the staff at the end of the meal, the service was excellent.

The staff was knowledgeable, polite, patient, discrete, helpful and yes, très French. They patiently explained to neighboring guests how dishes were prepared, what the differences between the types of cheeses were, and why they were asked to order dessert at the beginning of the meal (so it could be prepared just right and arrive in perfect condition) among other things.

The sommelier or wine master was especially helpful and understanding. He selected a wine to accompany each of the dinner courses. He returned time and again to make sure his selections were appreciated. When they were not, he immediately offered an alternative. His playful choices were in harmony with the meal: Young, light American wines from New York’s Long Island , Virginia and a dessert wine from Slovenia (a favorite). 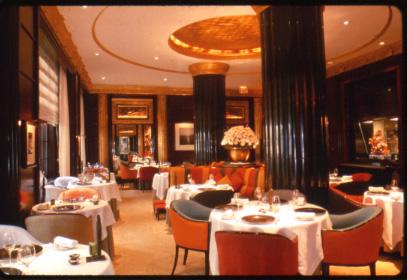